Meyer Family Vineyards is a small Okanagan Falls winery that focuses on single-vineyard wines, leaning heavily towards Burgundy varietals that feature Chardonnay and Pinot Noir. Proprietors JAK Meyer and Janice Stevens own two vineyards in Naramata and Okanagan Falls, and purchase additional grapes from growers throughout the Okanagan to produce about 3,000 cases of wine per year. Having collected Meyer’s “Tribute” Chardonnay for the past couple of years I recently took advantage of their Christmas gift case special to save 10% off a mixed six-pack of new releases: three Chardonnays and three Pinot Noirs soon arrived in an attractive presentation box. (Meyer should be applauded for their willingness to ship in six-bottle multiples that allow customers more flexibility in purchasing.) 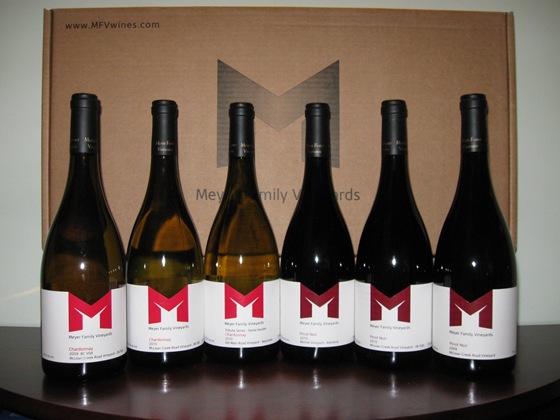 Amongst the Chardonnays was the newest Tribute wine, rounding out a three year vertical in my collection: 2008-2010. The Tribute series wines recognize a western Canadian for outstanding achievement in their field, and each year the Meyers donate $5,000 to a charity selected by the honouree or their heirs. For 2010 the wine honours Sonja Gaudet, national and international champion in Wheelchair Curling. The Tribute Chardonnay comes from the family-owned Old Main Road Vineyard in Naramata, and continues the tradition of excellence established for this wine in previous years. The 2009 version was described by Liam Carrier of Icon Wines as possessing a “near-perfect trifecta of balance” and the 2010 has been similarly well-received given its “creamy texture…and long, long finish.” Highly respected wine writer John Schreiner recently reviewed several Meyer wines and got right to the point regarding the Tribute: “the wine shows a laser-like purity.”

The other two Chardonnays I received composed two years of wines from Meyer’s McLean Creek Road Vineyard in Okanagan Falls. The smaller vineyard (compared to Old Main Road) yields only about one third the volume, so the McLean Creek Road Chardonnays are harder to find, with only about 200 cases produced each year. Both 2009 and 2010 wines have been reviewed by Icon Wines as worthy of 90+ points for their crisp, mineral driven Chablis-like style. I look forward to trying the McLean Creek and Old Main Road versions alongside each other in the future after a little bit of cellar time.

The McLean Creek Road Vineyard is also planted with some Pinot Noir in addition to the aforementioned Chardonnay, five different clones in fact! The winery has released the 2009 and 2010 Pinot Noirs from this vineyard simultaneously as the vintage variation has dictated. For 2009, the very ripe fruit was entirely whole cluster fermented, yielding a robust and concentrated wine in which “every bottle packs a punch”; good thing too because only about 50 cases were produced! Additional aging is recommended for this wine to ensure it really shines as it should. The 2010 vintage was more challenging, but more than three times as much wine was produced nonetheless. Both John Schreiner and Liam Carrier agree that further aging would also benefit the 2010, but it is already “lean, mean, and very flavourful.”

The final bottle in my six-pack was a Pinot Noir from the Reimer Vineyard in south-east Kelowna, from which enough grapes were sourced to produce almost 200 cases of a subtle and nuanced wine. Reviews thus far acknowledge that it shows off bright cherry and berry characteristics that I’m very much looking forward to enjoying in due time.

Although a number of collectable wines have come from Meyer Vineyards in a short period of time it is also worth noting that some very enjoyable entry-level bottles of Chardonnay and Pinot Noir, and even Gewürztraminer and Rosé have also been produced. The newly released 2010 Okanagan Valley Pinot Noir sells for $25, and is said to be a “silky charmer” that will serve as an “excellent palate refresher” when served with food. The screw-top suggests it is a wine to be opened sooner rather than later, and the bottle I recently received as a gift will hopefully be enjoyed over the upcoming holiday season.

Our monthly wine club met for the first time since September this month. A planned October get-together at Trafalgars – for their Taste of the Harvest dinner – was scuttled at the last minute due to the unexpected birth of one precocious baby girl. It seems she just couldn’t wait two more weeks to meet all of us, as her somewhat shell-shocked father relayed to us early that morning. Considering the same six of us had been out living it up the very night beforehand to celebrate his upcoming birthday, it was no surprise he was a little beside himself! Still, not being ones to pass up an opportunity to celebrate, we welcomed her to the world with a baby shower and a few magnums of Sumac Ridge Steller’s Jay Brut earlier this month; she politely declined a glass but was nice enough to pose for photos. 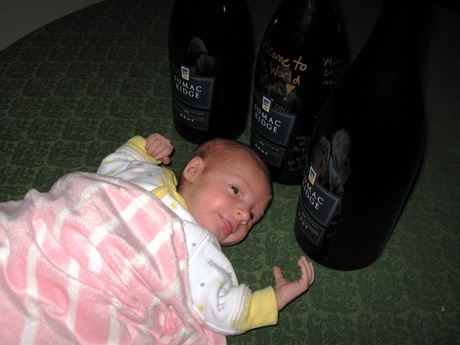 This month’s get-together was bountiful, with no less than six additional guests including the admittedly teetotaling baby. Her newly-minted Uncle was present as he passed through from Australia to Denver, as were our host’s Aunt & Uncle, Cousin, and Grandmother; fortunately the table included lots of leaves! Everyone stepped up to the challenge of feeding twice as many people as usual, and the delicious BC wine flowed just as readily. As leaders of the appetizer team, we relished in serving a warm and comforting soup to combat the greying skies of Vancouver autumn. Last month I acquired two beautiful bottles of Therapy 2010 AlterEgo, a new premium white blend from the Freudian-themed Naramata winery. A glowing review from Daenna Van Mulligen suggested creamy corn chowder, and I could not argue with that excellent suggestion. We spent the afternoon whipping up a vegetarian-friendly version of Smoked Chicken Chowder, and baked an accompanying Zucchini Cornbread for good measure. Not one to stop there, a batch of Goat Cheese Croutons provided a little extra oomph and continued the corny theme. The wine itself was a big hit, as everyone admired the golden colour and rich aromas of tropical and tree fruits. The majority components of Pinot Gris and Sauvignon Blanc provided for crisp but very well balanced acidity, and the addition of Viognier added noticeable floral characteristics. I think everyone was sad to see both bottles emptied so quickly, although I recently heard that Firefly Vancouver received a few bottles of this very hard-to-find wine just this week! 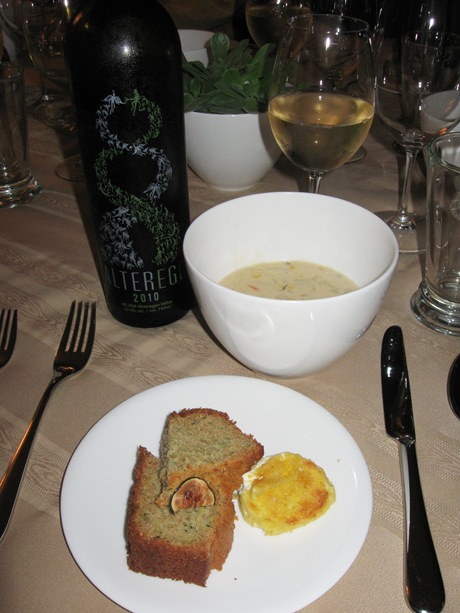 With so many people in attendance, we were able to enjoy two excellent entree courses, in addition to three charming Chardonnays. Our hosts prepared a hearty pasta with lentils plus crisp grilled leeks, while guests brought not only a mouth-watering squash and root vegetable medley for all but some admittedly tasty-looking prosciutto-wrapped halibut filets for the omnivores. Plenty of wine was to be had with three individually unique Chardonnays from the 2008 vintage: Joie Reserve from Naramata, Road 13 Jackpot from the Golden Mile, and Robin Ridge’s version from the Similkameen Valley. Once again, without consultation we avoided any duplication and managed to assemble an exciting gamut of wines. Joie’s creamy wine is a worthy follow-up to the Lt. Governor’s Award-winning 2007 vintage, with John Schreiner describing it impressively as “like drinking marmalade” due to the complexity! We enjoyed the round texture and the apple cider and citrus palate; plus it gloriously amplified the rich flavours of the root vegetables. The Road 13 Jackpot Chardonnay won a gold medal at last year’s Canadian Wine Awards, and provided a significant side-step in character to the Joie: more acidic and perfumed, it was lighter in body and possessed very noticeable crisp mineral flavours that reminded some of the Chablis style. Lastly the Robin Ridge wine took some time to open up but when it did a buttery texture emerged, while also possessing similar acidity to the Road 13 – almost a combination of characteristics of the two preceding wines. It was quite an illuminating trip through BC Chardonnay as we travelled the gastronomical highway! 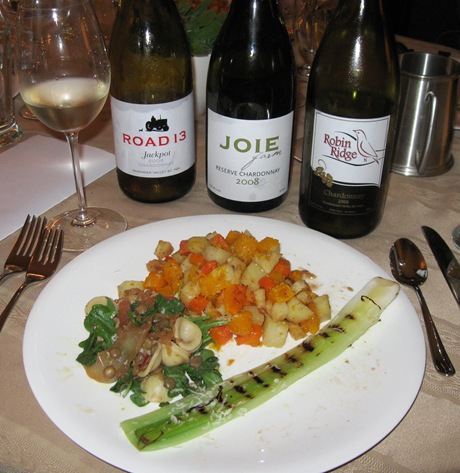 With everyone seemingly stuffed from dinner we settled down while the dessert team went to work rolling out pastry and filling the room with rich baking aromas. A few glasses of Bourbon and a glass of Road 13 Rockpile kept us busy in the meantime, and soon enough a few bottles of Gehringer Late Harvest Riesling arrived on the table to accompany the beautiful apple galettes fresh from the oven. This superb value ($18) dessert wine is part of a pair from Gehringer, with a late harvest Cabernet Franc filling out the red side of the equation. High sugar is balanced by cleansing acidity that ensures flexible food pairings, and the butterscotch, apple, and pear aromas went hand-in-hand with the delicious dessert that everyone raved about. That lucky little baby has many years of enjoying her father’s amazing pastries ahead of her, and if we’re lucky he may share a few more with us as well. 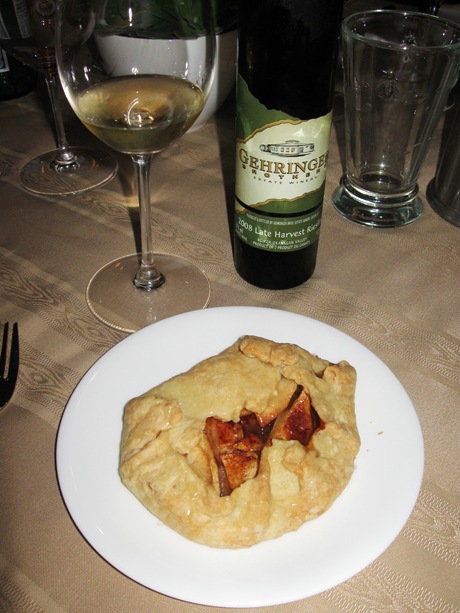 Next month hosting duties return to my wife and me. So we are looking forward to coming up with a festive entree that shows off the winter harvest and synchs up with a warm and toasty winter-appropriate wine. We should have the holiday decorations up by that time, so it should be a very merry celebration of BC wine!

Posted by Russell Ball at 09:36 No comments: