The several special bottles I’m reserving this month are dominated by classic Cabernet, both parent and child versions in the form of Franc and Sauvignon, respectively. An early August trip to Osoyoos for several days helped in the hunt for some of the small lot exclusives: 400 cases is the largest production quantity amongst these wines. Chance finds at specialty wine stores closer to home rounded out the selection, but in both cases I consider myself very lucky to have nabbed bottles reaching sold out status. The summer’s national award season maintains strong representation, as four acclaimed Gold medal-winners are on the list for those who seek to hunt them down. 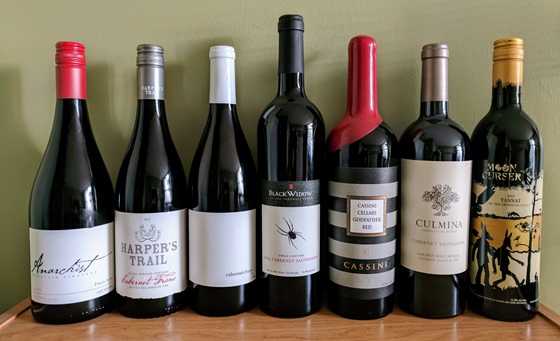 Anarchist Mountain 2015 Pinot Noir: From the quintessential “small guys” winery, Anarchist proprietor Terry Meyer-Stone actually founded and runs the Garagiste North Wine Festival. Alongside her husband Andrew Stone the pair produce a mere couple hundred cases of wine from their vineyard above Osoyoos. The Pinot Noir they produce (at the winery of Terry’s brother Jak Meyer) has garnered impressive accolades over the years, and the newest vintage is no exception, with a Gold medal from the recent National Wine Awards. Just 75 cases of the 2015 were produced, and it is long since sold out for direct ordering, but discerning private retailers often get a hold of some. The 2016 should be available soon, likely after undergoing similar wild yeast, whole berry fermentation in primarily neutral French oak. Sutton Place Wine Merchant $40

Harper’s Trail 2015 Cabernet Franc: Ontario Cabernet Franc had quite a run in this year’s National Wine Awards, garnering four Gold medals, while the only Gold for BC went to Kamloops, where Harper’s Trail made 200 cases worth on the banks of the Thompson River. WineAlign’s judges pointed out that cooler vineyards sites are producing “fresh, spirited, and ultimately crushable” iterations of the grape, and Kamloops’ first winery is leading the charge. The elegance elucidated in the tasting notes is reflected in judge Ben MacPhee-Sigurdson’s 91-point review, praising the balance and restraint on display in an exemplar bottle. Although still available in some stores, this vintage has been supplanted by the newly released 2016 at the winery, and the good news is that production has more than doubled from an excellent year. Swirl VQA Store $33

Lock & Worth 2015 Cabernet Franc: I acquired an earlier vintage of this Naramata Bench Franc a couple years back, and it still rests in the cellar; meanwhile I’m happy to bring another on board. Matt Sherlock and Ross Hackworth are excelling in their second venture, when they aren’t busy doing the same at Nichol Vineyard. The twenty-year-old estate vines overlooking the lake are still going strong, expressing themselves well through low-intervention, natural winemaking. Seventeen months in neutral oak has yielded 160 cases that ensure, “you're getting a clear-lens view of the grape,” in the words of GismondiOnWine’s Treve Ring. Her 91-point review this month praised the wine’s rustic intensity and aging potential despite the temptation of present enjoyment. If I hadn’t found the last bottle on the shelf I would crack another one open immediately for some of that impressive “scratchy minerality.” Firefly Fine Wines $37

Black Widow 2015 Cabernet Sauvignon: The red-hot, lengthy 2015 season was one in which Cabernet Sauvignon had some of its best chances to fully ripen, even outside the South Okanagan. Although uncommon, there are a number of high-quality Cabernet vineyards in the Naramata Bench, one of them being the Pocaterra property directly beside Black Widow. From there, Dick Lancaster has obtained superb red grapes to complement the estate vineyard at his arachnid-absorbed winery. Only the second varietal bottling, 100 cases from four selected barrels have now gone on to win (the sole) Gold at the All Canadian Wine Championships (following Double Gold last year for the 2014 vintage). Released this month alongside the other premium 2015 reds, it won’t last long in the highly visible roadside tasting room. Winery Direct $55

Cassini 2012 Godfather Red: In 2010 Adrian Cassini put together the first vintage of a new flagship wine for his namesake winery. The first blend of “The Godfather” added Syrah to the traditional Bordeaux reds of Merlot and Cabernets Sauvignon and Franc. After a departure in 2011 to one of just Cabernets, the wider blend has returned in 150 cases of the recently released 2012 – combining 42% Cabernet Sauvignon, 33% Cabernet Franc, 17% Merlot, and 8% Syrah. A rare taste at the winery offered me a rich, earthy nose and a dense but smooth palate of toasty dark plum and cherries before a lengthy, raisined finish. The 2012 represents the first in what should be a particularly promising series of vintages to come (Cassini’s 2013 Cabernet Sauvignon and Merlot having both received Lieutenant Governor’s Awards), but with Adrian having eschewed Syrah as of 2014, I expect further changes in composition to come. Winery Direct $70

Culmina 2014 Cabernet Sauvignon: Since launching a series of single varietal reds in 2013 to complement the flagship Hypothesis blend, the Triggs family’s Golden Mile winery has taken full advantage of the excellent 2014 vintage as well. In the eyes of Anthony Gismondi, the second year of Cabernet Sauvignon is significantly improved: his 89-point review this spring noted the increased finesse and perfect balance, offering aging into 2020. Tasting it myself this summer I noted a palate with enjoyable and ideal fruit focus - currants and Lapin cherries - plus lush tannins with less austerity than the same vintage’s Merlot. John Schreiner offered 93 points to the Sauvignon versus 92 points to Merlot in his June review – either would be well suited for the cellar. About 400 cases were recently released at the winery after 16 months in (25% new) French oak and bottling last June. Winery Direct $45

Moon Curser 2013 Tannat: I’m pretty sure this Osoyoos East Bench Tannat is still the only game in town, and there are few other locations in Canada that could even attempt the grape. Although blended with Syrah for the winery’s flagship “Dead of Night”, a few barrels are reserved for the single varietal bottling that resumed (after a brief absence) in 2012. Gone is the quirky “Tannant” nomenclature of that vintage, in which a typographical label error led the winery to embrace the Quebecois vernacular for “irritating”; now the proper varietal name is in place. After bottling in early 2015 - following a couple years maturation in (30% new) French oak, more have passed before this summer’s release of 121 cases; coinciding nicely with the Gold medal recently received at the National Wine Awards. Even after four years there is little hurry to unleash the full-bodied character, as the winery suggests another decade in bottle (sealed under screwcap no less) is within reason. Winery Direct $43

Posted by Russell Ball at 14:25 No comments: