It actually isn’t too uncommon for the members of our wine club to seemingly unconsciously coordinate. Despite the very nature of the club being one of surprise, our food and wine choices synchronize more often than expected. I suppose after several years of monthly dinners we’ve clearly developed corresponding tastes and styles. This month’s gathering marked another episode in harmony when the entire meal – with no prior organization – was discovered to be a flavourful, nearly vegan feast – embarrassingly nutritious but equally delicious. 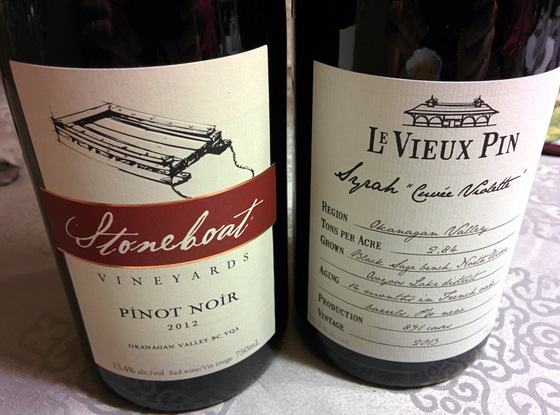 We rapidly got settled upon arriving by starting with ramekins of warm Vegetable Barley Soup as we admired the chefs’ tottering toddler – mere days into the world of walking. The rich and remarkably creamy soup had spent hours slow-cooking to warm our spirits, an easy feat when the exciting wine pairings were revealed. From Stoneboat Vineyards we opened the newest vintage of one of south Okanagan’s finest Pinot Noir. The 2012 expressed spiced red berries and nuts on the nose, with a generous, smooth palate of fruit flavours, plus what one guest suggested was caramelized beets. The wine’s clean finish provided superb refreshment alongside the thick soup.

A second introductory wine came from a personal darling of mine: Le Vieux Pin is quickly mastering red and white Rhone varieties at their Oliver winery. The attractive Cuvée Violette Syrah serves as an introduction to Winemaker Severine Pinte’s broad exploration of the grape’s potential in BC. The 2013 we enjoyed is sold out at the winery, with a new vintage to come this spring, but fortunately our friends found at least one bottle locally. A complex bouquet with cedar, vanilla, and forest aromas immediately impressed, while the mild tannins made for easy youthful enjoyment. However, we were sure to notice sufficient body and acidity to last – should one keep their hands off it after tasting the mouth-watering milk chocolate cherry flavours. Like the Pinot Noir, that bright, fresh character made a good foil for the viscous soup. 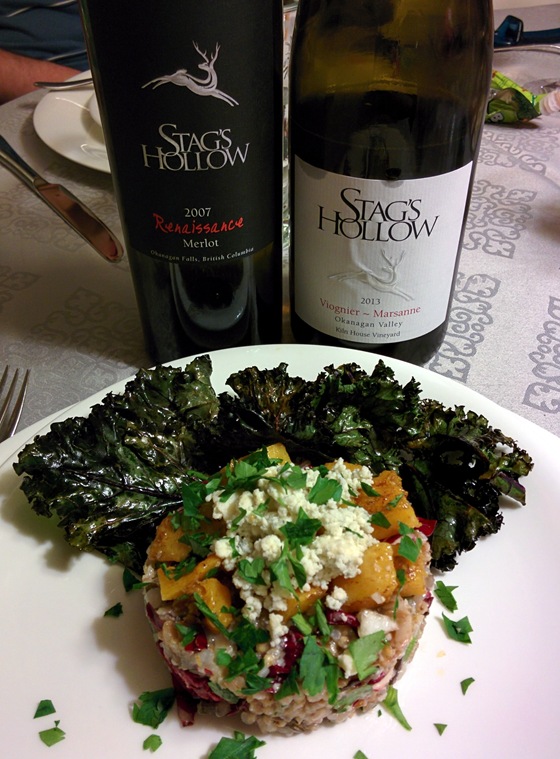 Following last month’s soft pretzel hors d’oeuvres my wife and I were assigned sit-down appetizer duty for this installment. I turned once again to BC Liquor Stores’ TASTE Magazine and found an appealing Mixed Grain & Squash Salad that piqued my palate and triggered an inspired search of the cellar. I couldn’t help but present a pair of gems from Stag’s Hollow, particularly once I found a 2007 Renaissance Merlot calling out for consumption. With the salad and decorative kale chips artfully presented we first served the coordinating 2013 Viognier Marsanne, already double decanted back into bottle. This adventurous orange wine is an extreme rarity, with only 35 cases produced after a year in used Acacia wood. We gushed over the intense apricot character and mushroom hints, while the mild tannin paired perfectly with the (optional) blue cheese sprinkled atop the salad.

Following some time in the decanter the Renaissance Merlot was also heartily enjoyed, presenting an intoxicating nose of aged blueberries upon first impression. A bit of leather on the relatively austere palate gave way to a very smooth texture that celebrated several years in bottle. That mature character brought out the smokiness in the kale chips, providing another delightful food pairing for the dish. Back in 2010 Anthony Gismondi suggested 2-4 more years in bottle would help the Merlot really shine, but more than five years later it’s still going strong and provided another impressive introduction to the evening. By the time our hosts served the entrée course our inadvertent motif had become obvious: Squash, Apple, & Fennel Galette included a vegan crust made with coconut oil, accessorized by fresh Spinach Salad with avocado, citrus, and fried tofu. The wine pairings included a duo of creative red blends that favoured lighter red varieties. The JoieFarm 2013 PTG provided a blend of 55% Gamay and 45% Pinot Noir from four Naramata and Summerland vineyards. Smooth and fruit forward on the palate we detected in it underlying notes of earthy, meaty character with bacon hints that complemented the crispy, savoury tofu. From Creston’s Baillie-Grohman we also enjoyed the 2014 Récolte Rouge, a somewhat mysterious blend of most likely Pinot Noir with Merlot and Cabernet Franc backing. More smoked meat plus sweet jerk flavours emerged alongside the Galette, and the nice soft texture made it easily quaffable. 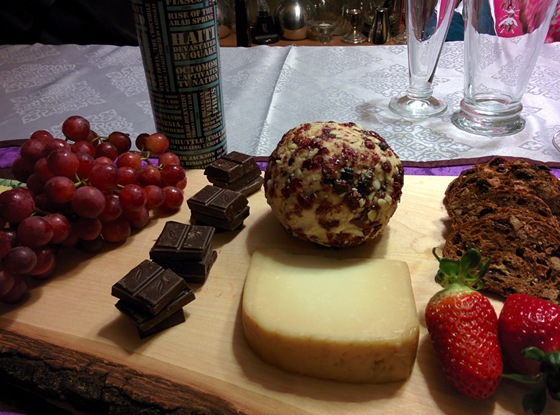 Dessert provided a few guilty pleasures in which to indulge after such a responsible meal, but yielded another surprise in the form of a delicious Cashew “Cheese” Ball! Some Smoked Boerenkaas Gouda was also on hand plus dark chocolate and tangy fruit, but the wonderfully umami-rich Cheese Ball stole the show. Of course it couldn’t do so without Elephant Island’s exciting Stellaport, made from ripe Stella Cherries and aged for more than a decade in a solera system, before this particular bottle was released in 2013. Surprisingly drier than expected the Stellaport oozed smoked cherries & chocolate, toffee, and over time an appealing savoury barbecue aroma. Nary a drop remained by evening’s end, leaving us to bid adieu relishing the rich, long-lasting flavours as we pondered new culinary memories.

Posted by Russell Ball at 13:02 No comments: