Another big month for local wine clubs was on offer, as the first shipment of the year for many sees devoted collectors reaping the rewards of pre-releases and exclusive specialties. Ironically, one of the oldest new releases is a 2013 Pinot Noir wisely and patiently bottle-aged at the winery to maximize near term enjoyment, while elsewhere elegant 2014 and bold 2015 reds are appearing in greater numbers. For those looking to get a head start on finding these particular rarities take heed of the access given in advance to members. Now that seemingly every winery has a club they are ensuring the commitment is worth one’s while – guaranteed access is one way to do so; I know I consistently enjoy the serenity of certainty. 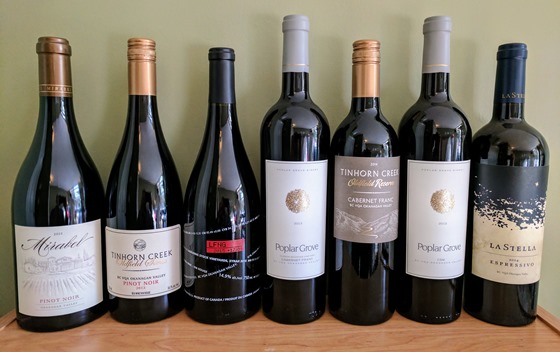 Mirabel 2015 Pinot Noir: It’s a bold proposition to come out of the gate with an icon-class Pinot Noir and the $70 price to match, but the collectible first vintage from this new label has strong pedigree. Doug and Dawn Reimer have taken the time to establish their eleven-year-old South Kelowna vineyard and personal brand while selling high quality grapes to respected wineries like Meyer and Foxtrot. They contracted highly talented winemaker Matt Dumayne out of Okanagan Crush Pad to produce their first vintage, already receiving glowing reviews: John Schreiner’s profile of the Reimer’s endeavour last fall included a 95-point score for the Pinot. There’s no tasting room or wine shop to visit yet, and unless you want to order it direct by the case (from 237 produced), New District is Mirabel’s exclusive retail partner – particularly fortunate for Vancouver residents! New District $89

Tinhorn Creek 2013 Oldfield Series Pinot Noir: With vineyards on the Golden Mile and Black Sage Benches Sandra Oldfield’s Oliver winery tends towards Bordeaux reds, but Pinot Noir has always had a place. A few years ago, Sandra and her team realized the Pinot Noir fared much better with additional bottle aging, and so the varietal tier gets one year, and the reserve sees a full two years of rest before release. After spending 18 months in neutral oak 850 cases were bottled in May 2015, awaiting public release within the next couple of months; Crush Club members get earlier access in their tri-annual shipments. Winemaker Andrew Windsor must be excited to exhibit his first work in this varietal series since taking the lead just months after harvest: the typical dark fruit, chocolate, and spice of southern Okanagan Pinot should be well evident, extending the previous vintage’s elegance and refinement. Winery Direct $35

Laughing Stock 2015 Syrah: The rich and elegant Syrah put forth by David & Cynthia Enns is an immediate buy upon release for me, even though it gets much less exposure than their famed Portfolio red blend. Their Osoyoos vineyard yields sublime fruit that has garnered awards for past vintages that include a Platinum Medal at the National Wine Awards, Decanter Regional Trophy, and Lieutenant Governor’s Award. From the “spectacularly warm spring” of 2015 comes a brand-new release I was overjoyed to find in triplicate amongst my latest Preferred Share Wine Club order. The “fabulously ripe” fruit was 40% fermented in oak puncheons and tank (some whole cluster), before 14 months in 35% new French oak before bottling of 948 cases. My triplets provide for present and future enjoyment as I age some into the next decade. Winery Direct $40

Poplar Grove 2013 Munson Mountain Cabernet Franc: Poplar Grove Wine Club’s first action in 2017 didn’t disappoint, sending out their newest members only, single vineyard Cabernet Franc. The Munson Mountain vineyard is adjacent to the Penticton winery, and has been directed into this rarity for the fourth time as a Club treat. Bottle-aged eight months longer than the now-sold-out regular (Osoyoos sourced) Cabernet Franc, the Munson bottling is earthier and shows more minerality, with fine tannins and a very long finish. Having received three bottles and already had a taste, I look forward to aging the remainder, up to ten years from vintage in the eyes of the winery. Only 340 cases were produced, versus 500 for the regular varietal production, and it remains Club exclusive, for now. Winery Direct $40

Tinhorn Creek 2014 Oldfield Reserve Cabernet Franc: Alongside a pair of Pinot my newest Crush Club order contained upcoming Cabernet Franc, exhibiting new branding that returns to the “Reserve” language in use long ago. I can’t help but notice a growing trend back to darker labels for premium wines, after the bright white of the past several years: witness last month’s collection of examples. This smartly dressed new Franc is coming soon, after 800 cases aged a year in bottle starting since last May. It’s a true reserve, selected after French oak barrels (25% new) spent a year maturing before assessment, blending, and another six months in oak for the best of them. In some years (e.g., 2011) none are deemed worthy, and so this marks the fourth vintage (and a very high quality one at that) since the inaugural 2010, making Cabernet Franc the youngest of the winery’s reserve red portfolio. Winery Direct $35

Poplar Grove 2013 CSM: Although renowned for Merlot, Cabernet Franc, and the iconic Legacy red blend, Poplar Grove’s cryptic CSM can be overlooked by some people, to their great misfortune. Unlike the Munson Cabernet, the 600 or so cases of CSM have become readily available via the winery (but unlikely elsewhere), where fans can enjoy this delightfully creative melange of 29% Cabernet Franc, 23% Cabernet Sauvignon, 23% Syrah, 18% Merlot, and 7% Malbec. The newest blend is particularly complex, not only including Malbec for the first time, but bringing Cabernet Franc to the forefront after excluding it entirely over the past couple of vintages. The name is primarily intended to refer to Cabernet(s), Syrah, and Merlot, but fortunately Malbec also starts with M and fits in easily, plus CCSMM doesn’t quite roll off the tongue. Winery Direct $35

LaStella 2014 Espressivo: It’s not often that the measured and focused portfolio at LaStella witnesses the birth of a new wine, so one is inclined to take notice when it does happen. With the Merlot-dominant “Fortissimo” blend now firmly established in the family, as it were, a new blend leaning on Cabernet has been introduced, from just 123 cases of the inaugural vintage. Like Fortissimo, Espressivo includes a touch of Sangiovese paying tribute to the winery’s Tuscan influences, with 5% (at first) complementing 55% Cabernet Franc, 20% Cabernet Sauvignon, and 20% Merlot, all aged 18 months in 20% new oak, both French and Hungarian. An early taste by the WineAlign crew this month found favour amongst David Lawrason, who acclaimed the richly textured, powerful ode to Italian reds. I myself was pleased with the dark and spicy palate, in contrast to Fortissimo’s (equally enjoyable) lush berries, during a preview tasting last month, and am happy to find it a home in my collection. Winery Direct $46