Variety defines this particular collection of local libations more so than usual: my latest finds include four vintages, four varietals, three regions, two icon blends, and a great many sources for those unwilling to take “sold out” for an answer. These bottles come from as far afield as Kamloops and Lillooet in addition to the reliable Okanagan and Similkameen valleys, and include both recent releases plus resurfaced legends I never expected to find. New boutique shops rub shoulders with veteran wineries such as Burrowing Owl and Poplar Grove – all equally challenging to track down however! Considering everyone is looking for something special to either bring to the holiday table, or gift to loved ones in the coming weeks, my hope is that a few more of these bottles will find their way to another lucky cellar soon. 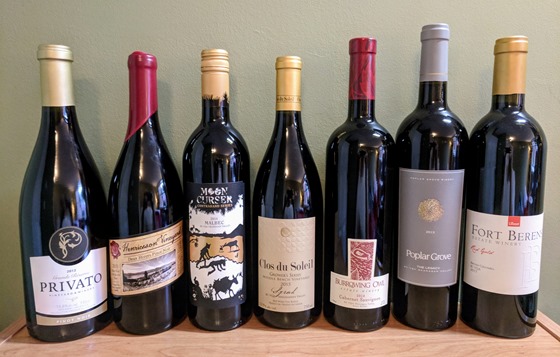 Privato 2012 Grande Reserve Pinot Noir: A couple of years ago the second vintage of Pinot Noir from this young Kamloops winery received a prestigious Best in Class Double Gold at the 2015 All Canadian Wine Championships. Eight reserved barrels of that same wine, with additional age totalling 42 months, were bottled the following year to yield “one of the most powerful Pinot Noirs to date in British Columbia,” in the words of John Schreiner last spring. John’s 92-94 point review remarked upon the “intriguing tension” between dark fruit and oak influence, offering a wine with a decade ahead of it in the cellar. Unable to visit the winery at the time of release, I assumed I would never see a bottle, so imagine my surprise in spotting this unicorn at retail after all this time! Just this year the wine was named Best of Varietal at the Okanagan Spring Wine Festival, garnering additional accolades a full five years later. Sutton Place Wine Merchant $57

Henricsson 2015 “Deux Hivers” Pinot Noir: In welcoming Peter & Kajsa Henricsson to his store, Marquis Wine Cellars owner John Clerides suggested their Naramata Chardonnay and Pinot Noir to be the best BC iterations he had tasted “in my 30-year wine career.” While unable to muster the pure objectivity needed for a similar statement, I can certainly report them to be excellent and very memorable after a tasting at Marquis this month. I could readily distinguish between both 2015 Pinot Noirs on offer, considering the “Deux Hivers” (two winters) version saw twice as much barrel time - resulting in a richer, spicier profile. From 26-year-old vines of primarily “suitcase” (European) clones, the wine aged in 25% new French oak before 130 cases were bottled in July. Should Marquis have been unable to source another case of Deux Hivers I did spot both Pinots and the Chardonnay at Legacy Liquor Store. Winery Direct $90

Moon Curser 2014 Malbec: Small lots of Malbec are found in this adventurous Osoyoos winery’s “Contraband” class, and limited to even fewer than usual with just 197 cases in 2014. A strong showing at the National Wine Awards yielded a Silver medal this summer and praise for the wine’s finessed depth and elegant richness from Judge Sara d’Amato. More recently the wine took home one of five Double Gold – considered the top 10% – in the “Other Red” category (home to varieties such as Tempranillo and Zinfandel) at this year’s Six Nations Wine Challenge in Sydney, a prestigious invitational competition for New World wines. The generously ripe (26.1 Brix) grapes originated from a three-acre estate block, and the eight barrels used for the single varietal bottling spent 13 months in 25% new French oak. The wine is now sold out at the winery, with any remainder reserved for future wine club shipments (mine arrived this month), so store shelves are your best bet. Winery Direct $32

Clos du Soleil 2015 Syrah: The Bordeaux-styled Keremeos winery of Clos du Soleil has produced a series of small lot “Grower’s Series” wines over the years that occasionally diverge in style, most strikingly with Syrah, the inaugural vintage having been produced in 2014. The second vintage remains small in scope – only 200 cases – but bigger in every other respect, now bottled under cork to indicate greater aging potential. Winemaker Michael Clark is clearly becoming more familiar with a grape he rarely handles, and providing reason for the estate Cabernet and Merlot to grow a little nervous. Harvested from the Middle Bench Vineyard in Keremeos, not far from the home vineyard, the Syrah spent 16 months in French oak before bottling, but only one of eight barrels was new wood. A poetic and entrancing review by Treve Ring provides 91-points of praise for this special bottle – “a must buy for the cellar” – in which she compliments the rich elegance of its youth but encourages one to “make a date for 2025.” Winery Direct $33

Burrowing Owl 2014 Cabernet Sauvignon: This well known Black Sage Bench Winery has been playing fast and loose with their release dates in recent years: although finally being sold in the tasting room as a “new” release, this same Cabernet was briefly spotted in Vancouver stores a year ago for what I presume was a pre-Christmas preview. It wasn’t until this summer that the wine was submitted to competition, snagging a prominent Gold medal from the Nationals and wide praise from judges for capturing a challenging grape at the peak of ripeness. The early-to-mid November harvest came after an ideal season, and the grapes further benefited from the support of Burrowing Owl’s complex barrel program: 83% French oak, 11% American, 6% Hungarian, with 29% new oak and 29% one-year old. Although acknowledging approachability at present, Nationals Judge John Szabo sees a long future for this wine, into the mid-2020’s. Winery Direct $38

Poplar Grove 2013 The Legacy: Already scrubbed from the winery’s website, the newest vintage of the signature blend at Poplar Grove was there and gone in a flash. Special allotments were fortunately reserved for the popular wine club – my only opportunity to continue a prized vertical collection. The blend is heavy with Osoyoos Cabernet Sauvignon from a warm vintage, leading 27% Cabernet Franc, 13% Merlot, 13% Malbec, and 3% Petit Verdot, all aged 21 months in French oak before two years in bottle before release. Production quantities vary significantly, but remain limited: recent vintages have ranged from 350-900 cases, so it’s a safe bet a mere several hundred were snapped up in a hurry. Although it may be absent at the winery, they seem to have sold a fair amount to BC Liquor Stores, who are carrying hundreds of bottles across the province in anticipation of the holiday gift-giving season. Winery Direct $50

Fort Berens 2015 Red Gold: The second vintage of the new icon red from Lillooet ups production by 50% to yield a whole 150 cases this year. After discovering a handful of exceptional barrels from 2014 that mandated this special release, several made the cut again in 2015, from vineyards across the province. Cabernet Franc (43%) from Lillooet and the Black Sage Bench has joined Cabernet Sauvignon (31%) from Osoyoos, and Merlot (26%) from Blind Creek in the Similkameen. The inaugural Appassimento-styling is sustained, with two thirds of the Cabernet Franc grapes air-dried for a month before another month-long fermentation. The result pushes alcohol above 15%, contributing to John Schreiner’s recognition of the wine’s “power and heft” in his recent 94-point review, mirrored by Treve Ring writing for GismondiOnWine: “The blend certainly has density, with a flush of sun-ripened red and black fruit, pipe tobacco, cherries and thorns on a plush, cushioned palate.” Treve’s review is also sure to compliment the surprisingly light initial entry that belies the eventual heft, well mitigated by soft tannins and a finely dusted finish. Winery Direct $52

Posted by Russell Ball at 21:18 No comments: