While my focus over the holiday season was on celebrating with friends and family, I found some time between gift shopping to pick up a few bottles for myself. Upon review, these cellar-worthy wines come from a broad assortment of winegrowers. With everything from Pinot Noir to rare varietal Petit Verdot there’s representation from Kelowna, the Naramata Bench, Golden Mile, Black Sage Bench, Similkameen Valley, and even Lillooet’s Fraser Canyon terroir. Alongside the fantastic cellar selections that emerged over Christmas and beyond, these newcomers ensured BC wine has been a large part of the festivities this month. 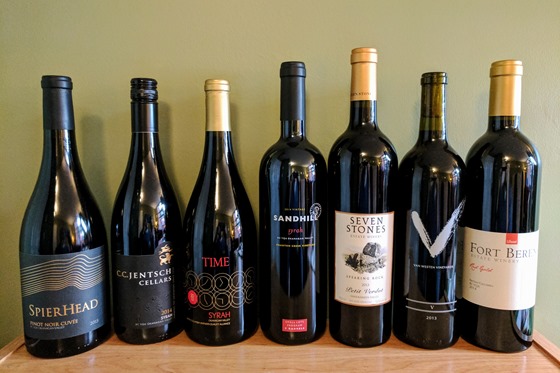 SpierHead 2015 Cuvée Pinot Noir: Since transitioning from purchased Merlot and Cabernets to a major focus on estate Pinot Noir SpierHead’s premier Cuvée has emerged as the flagship amongst several tiers. The small first lot comprising 100 cases of the best barrels in the cellar brought home Gold from the National Wine Awards, while the recent 2014 was just awarded the coveted Premier’s Medal for top wine at this fall’s BC Wine Awards (after Platinum at the Nationals). Fortunately production is rising as more vineyard blocks come on stream, and 327 cases of the brand new 2015 are available for sale now that the remaining 2014 has vanished in a flash. A complex blend of five clones was aged in French oak for ten months, leading to an intensely flavoured, generously textured wine with great aging potential: John Schreiner’s 93-point review makes a strong case for acquisition if I hadn’t already planned on growing my collection of every vintage. Winery Direct $44

C.C. Jentsch 2014 Syrah: The newest Syrah from senior winegrower and junior winery owner Chris Jentsch is only the third vintage but has significant pedigree already: the initial 2012 went straight to Gold at the National Wine Awards, and then 2013 took a step further to Platinum status. The quick rise to favoured status wasn’t missed by reviewer Treve Ring in her 90-point review this fall. While the first edition included Viognier, last year was straight Syrah; 2014 returns to its roots with a 9% contribution, co-fermented and then aged 16 months before bottling in April. The celebrated grapes come from the Jentsch family’s vineyards on the Black Sage Bench and Golden Mile, where the “crown jewel” Syrah block is found. Winemaker Amber Pratt has praised 2014 as a “dream vintage”, and it’s exciting to see the exceptional fruit from that year being released as finished wines more and more frequently these days. Winery Direct $37

TIME 2013 Syrah: Although the well balanced reds of 2014 are starting to be seen in abundance, the 2013 season was no slouch. Those wineries that have allowed extensive aging in barrel and bottle are still releasing wines from that vintage, and collecting generous accolades to boot. At the BC Wine Awards during this fall’s Okanagan Wine Festival industry veteran Harry McWatters’ Syrah took home one of eight Platinum medals, a coup for his mature Sundial Vineyard on the Black Sage Bench. The honour may have been tinged with some bittersweet memories as that same vineyard, and the under-construction winery that was to be Harry’s legacy, were surprisingly sold earlier this year to Richmond businessman Bai Jiping. John Schreiner’s recent update on Harry’s next steps also includes his 93-point praise for the “bold and rich” Syrah (a mere 200 cases too), shades of remarks on WineAlign earlier this year. Winery Direct $40

Sandhill 2014 Small Lots Syrah: The newest release of Howard Soon’s Small Lots darling is particularly collectible as it comes with news the Phantom Creek Vineyard from which it was born was sold this spring. Shortly after his purchase of McWatters’ neighbouring Sundial property Bai Jiping snatched up Dick Cleave’s renowned seven-acre vineyard. The rise of Jiping’s Phantom Creek Estates will likely preclude any further sales to Sandhill, so the upcoming 2015 may represent the final vintage available to Soon. The name doesn’t lie, as only 175 cases were produced this vintage, and it is rarely seen outside the winery tasting room, but often serving as a benchmark for BC Syrah. The exemplary vintage is likely to have provided for a rich and generous wine: Howard’s own notes speak to particularly dark fruit, noting the “purple-black colour” and flavours of blackberry, black cherry, and dark plum. Winery Direct $42

Seven Stones 2013 Petit Verdot: Unlike many of the wines in my cellar that represent vertical collections or simply consistent annual purchases this tiny lot of Similkameen Petit Verdot from George Hanson was new to me. Having stopped in to the winery at just the right time recently I was afforded a generous taste of something mysterious. George’s hidden pour was accompanied by a request seeking varietal guesses, and thoughts of a bold Gamay sprung to mind: imagine my surprise when a very non-traditional, silky smooth, elegant Petit Verdot was revealed. Typically produced exclusively for the Seven Stones Wine Club, only 87 cases of the newest vintage were available for distribution - hence my unawareness. Lucky for me there remained a few cases after Club allotments, and the quiet end-of-season tasting room was the recipient. May you be equally fortunate in finding it! Winery Direct $35

Van Westen 2013 V: Keeping with his naming tradition of words led by “V” Robert Van Westen elected on a single letter for his five variety Bordeaux-style blend, with a convenient nod to historical Roman numerals. The newly released 2013 is also the fifth vintage since the inaugural 2009, all of which have a place in my vertical set awaiting a full six vintages. Four Naramata Bench vineyards farmed by Rob contributed to a 348 case production that was aged in French oak for 20 months. The relatively high proportion of Malbec found in previous vintages has been reduced to just 14%, complementing 45% Merlot and 28% Cabernet Franc, joined by 7% Cabernet Sauvignon and 6% Petit Verdot. A recent taste left me quite content with the pleasant perfume and full body, more fruit forward than the same vintage’s “Voluptuous” Merlot-Cabernet Franc. Winery Direct $35

Fort Berens 2014 Red Gold: Having produced a reserve Chardonnay named White Gold for the past few vintages, owners Rolf de Bruin and Heleen Pannekoek took the obvious next step upon being notified of a handful of exceptional barrels from the 2014 vintage. Winemaker Danny Hattingh had discovered enough for just over 100 cases, blending Lillooet estate Cabernet Franc and Merlot with Osoyoos Cabernet Sauvignon, and Merlot from Cawston’s celebrated Blind Creek Vineyard. Even more exciting, half of the Cabernet Franc was air-dried in a (locally) rare appassimento style. This successful experiment was relayed to me by Rolf during a recent tasting opportunity, in which the mouth-watering freshness and surprisingly smoothly textured Red Gold had me rushing out to buy a bottle. The positive impression seems near-universal, as a bevy of positive reviews have emerged from the likes of Anthony Gismondi, Daenna Van Mulligen, John Schreiner, and WineAlign’s Michael Godel. Village Wines $45

Posted by Russell Ball at 21:42 No comments:

Working around the schedules of eight people just a week before Christmas and the start of Hanukkah would seem an impossible task yet we managed to come together for a joyous meal this weekend. Funnily enough, despite the cold and snowy season, everyone seemed to have elected on light-bodied reds and white wines for the year’s final Club dinner. Given the inevitable upcoming feasting and plenty more hearty holiday tipples, something fresh and a bit more subtle than big reds seemed to be on many a mind. 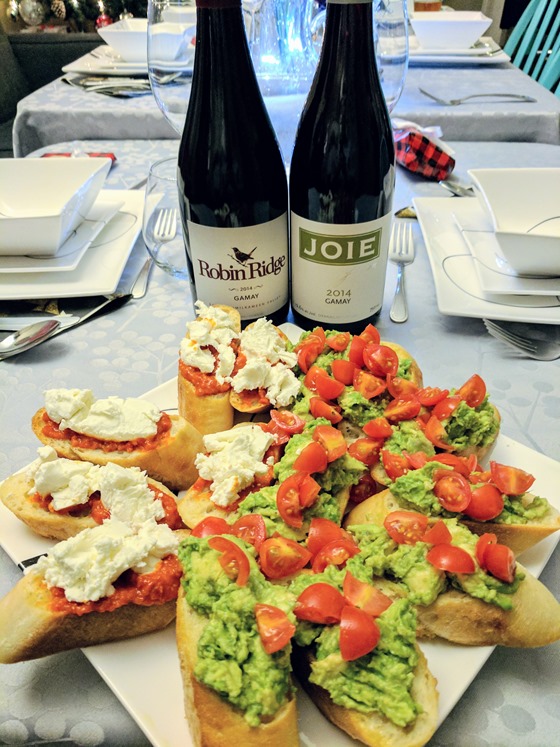 Some tasty toasts made for a mouth-watering reception with a pair of Gamay as we compared the 2014 vintage from two valleys. The Okanagan’s Naramata Bench offering from Joie was deliciously fresh with admirable complexity to boot. Expressive fruit forward aromas of red currants and plum mingled with a hint of earthy barnyard. Just as bright as the Tomato Avocado Toasts, the gamey palate suggested additional age could make for an even more exciting impression in the near-future. Red Pepper and Goat Cheese made fast friends with Robin Ridge’s Similkameen Valley Gamay, a consistent performer from this Keremeos winery. Very well balanced, soft fruit was felt to bring out the rich roasted peppers, with a darker and spicier profile hinting at cinnamon and cloves. 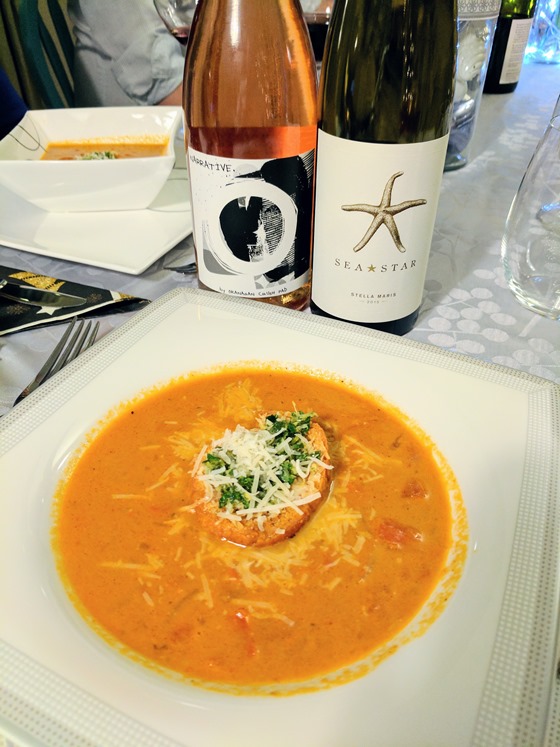 Sitting down for the appetizer course we were treated to a vibrant and rich Tomato Soup, with Cheese Toast & Gremolata – a winter warmer homemade from scratch. Regional diversity remained strong with the introduction of Sea Star’s 2015 Stella Maris, a Pender Island merging of Gewürztraminer, Pinot Noir, Pinot Gris, Schönberger, and Ortega. Relatively dry considering the components, it very nicely balanced the floral perfume and zippy citrus fruit of the delicate palate. The ease with which this long-since-sold-out blend found favourite is no surprise given this young winery’s celebrated success. Drifting a little darker we also enjoyed Okanagan Crush Pad’s 2014 “Narrative” Rosé, with crisp and clean raspberries maintaining the fresh flavours of the dish. Based around Pinot Noir, the Rosé offered generous red fruit and minerality in amongst the refreshing body. 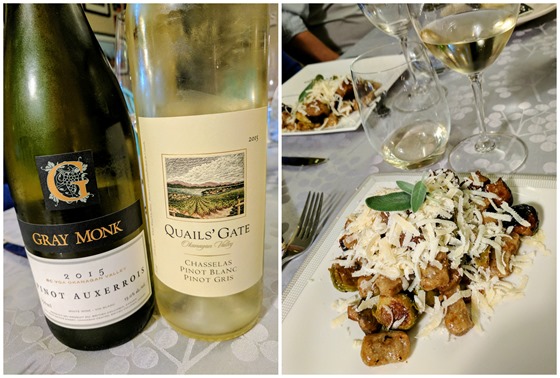 Warmed with soup we cooled down with another couple whites and the main course of Sweet Potato Gnocchi in Sage Maple Butter. Roasted Brussels Sprouts, mushrooms, and apple rounded out the sumptuous presentation, while Gray Monk’s uncommon Pinot Auxerrois (2015) made an ideal pairing. Honeyed floral aromas offered fruit blossoms on the nose, while a palate of baked apple and tropical pineapple synchronized nicely with the Gnocchi. Quails’ Gate’s 2015 white blend, equally unusual with Chasselas joined by Pinot Blanc and Pinot Gris, provided plenty of enjoyment, but less synchronicity. The West Kelowna winery’s most popular offering always shines with a bright summer-friendly palate, but the generous citrus fruit couldn’t compete with the Auxerrois as a Gnocchi playmate. 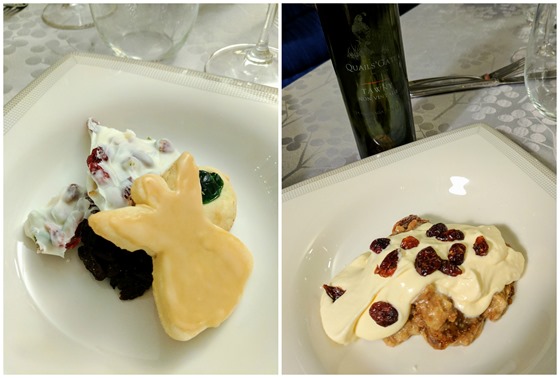 Having hosted the previous dinner, my wife and I were enthused to offer dessert, but our dreams were dashed by technical problems. Logistical issues in the kitchen upset the precise timing of our Holiday Hot Cake with Eggnog Cream, leaving it laughably lacking. Fortunately my mother’s presence as VIP guest was accompanied by her Christmas baking! Mom’s shortbread, chocolate haystacks, and pistachio-cranberry bark were devoured while we let our Hot Cake set/congeal. Eventually the rich Eggnog Cream had a home of sorts, and we cracked open Quails’ Gate Tawny to finish the meal. Purchased at the winery in 2012, the fortified Gamay (a blend of vintages) had already been aged several years in oak before bottling. With only 40g/L of residual sugar the Tawny made for a mellow conclusion, showing all the expected notes of chocolate and dried dark fruit. Putting aside our own dessert distress, it was another fun and friendly meal; may your own holiday season be just as festive, and fortunate!

Posted by Russell Ball at 20:50 No comments: