A couple pleasant surprise finds this month were buoyed by a quick trip to the Similkameen Valley, perfectly timed to acquire some additional rarities. Although my plans to attend the coveted and highly anticipated Clos du Soleil annual vertical tasting were sadly cancelled due an acute illness, I was able to visit a few other wineries while in the region. The opening of the Fall Wine Festival always brings out new red releases, and I was poised to take advantage of my presence in wine country this month. 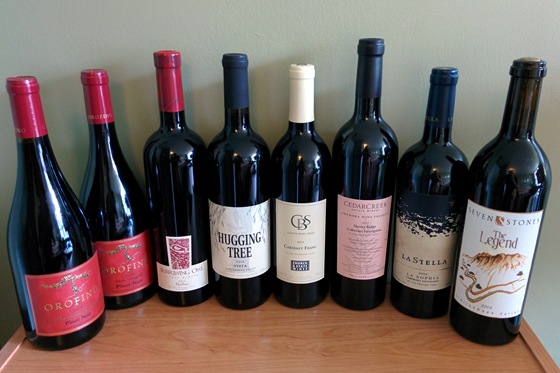 Orofino 2013 Home Vineyard Pinot Noir: The home vineyard site at the winery in Cawston is planted with five clones of Pinot Noir that John Weber blends together to age for 16 months in French oak. It’s an annually reliable version with classic notes of red berries and forest floor, plus an evolving silky texture over time. The 2013 is a brand new release being distributed to the Collector’s Club and in the tasting room, as the 2012 is just reaching the end of vintage – a successful one at that, having brought home a Silver medal from the 2015 National Wine Awards. The 350 cases of 2013 should soon be relatively widely available, including at VQA stores. Winery Direct $32

Burrowing Owl 2013 Malbec: In 2011 Burrowing Owl began producing a varietal Malbec, always in small quantities and usually exclusive to the winery tasting room. Somehow Marquis Wine Cellars got their hands on a couple cases of the newest vintage, not yet for sale at the winery! With no information available, one can only assume it will reflect the warm vintage, and display similarly “lush, dense fruit” as the 2012; that one spent 21 months in oak, of which only 25% was new. A good opportunity to sample one of the growing cadre of rich, fruit-forward Malbec emerging from some adventurous BC wineries. Marquis Wine Cellars $40

Hugging Tree 2012 “Vista” Cabernet Syrah: This up-and-coming Similkameen winery just celebrated their first year of business – and their first estate-produced vintage at the new crush pad. While those 2015 reds won’t be seen for a couple of years, the 2012 vintage is in superb form, improving with every additional day in bottle. Visiting the tasting room earlier this month gave me an exciting opportunity to sample the entire portfolio of five wines, including the small lot (75 cases) winery-exclusive Vista: 65% Cabernet Sauvignon and 35% Syrah. The mixed berry and cocoa aromas were reminiscent of Port, with a rich, intense palate in the same vein. Strikingly, the fruit seems to have devoured 100% new oak (half French, half American) with ease. Winery Direct $35

Church & State 2013 Coyote Bowl Cabernet Franc: In particularly good vintages Church & State produce a reserve-tier varietal Cabernet Franc from their Black Sage Bench vineyards. The 2013 was awarded a Gold medal at this year’s National Wine Awards, putting it amongst the top three from BC (Ontario wines nabbed two Platinum in the category). With only 100 cases produced, it is presently exclusive to the winery’s Club Q wine club, but one hopes a slightly wider release will follow. WineAlign Awards judge and Gismondi on Wine contributor Treve Ring provides a very appealing 90-point review that makes it clear this wine “will cellar for 3-5 years easily.” Winery Direct $35

CedarCreek 2013 Amphora Cabernet Sauvignon: Earlier this summer Winemaker Darryl Brooker led the release of his cutting edge Amphora winemaking project, just before moving on to take the reins at Mission Hill. Two years ago he packed 500kg of grapes from the winery’s Osoyoos “Desert Ridge” vineyard into an Italian clay amphora and sealed it shut for eight months. Without any additions (e.g., sulphur) it was later foot-stomped and bottled unfiltered to yield only 360 bottles sold exclusively at the winery, to great acclaim. Apparently the exception to that limited availability was a half-case sent to Marquis, bottles #1-6; I managed to bring home #3, leaving only three bottles remaining of this incredible natural wine. Marquis Wine Cellars $73

LaStella 2012 La Sophia Cabernet Sauvignon: Up against the super-iconic Maestoso Merlot (not to mention Allegretto Merlot) LaStella’s small lot Cabernet Sauvignon flies under the radar. Only a miniscule amount is produced each year – just three barrels (75 cases) in 2012 – hence the 3-bottle sales limit imposed by the winery upon recent wide release. It’s a sleeper for the cellar, crafted in a restrained but rich style said to be inspired by the wines of coastal Tuscany instead of Napa Valley. Pristine and perfectly balanced grapes from the 2012 growing season have yielded “firm but plush tannins” and vibrant acidity to provide for excellent food pairing potential and a prosperous long life – an exemplar “collectible”. Winery Direct $90

Seven Stones 2013 The Legend: Owner and winemaker George Hanson has created a bit of a dichotomy with his icon red and his regular Meritage: The Legend sees almost no bottle conditioning, while the $35 Meritage is often three years behind – the 2010 was just released! The thoughtful strategy gives fans the option of reds to drink now or cellar for the future if they wish. Only 208 cases of the newest Legend were produced, from selected barrels of Cabernet Sauvignon (48%), Merlot (32%), Petit Verdot (12%), and Cabernet Franc (8%). George aims for a wine of particular complexity, texture, and finish worthy of the name. It’s released in the winery tasting room on the first of October each year, thus I’ve only managed to acquire two previous vintages, so I lucked out being in the Similkameen this month! Winery Direct $50