Mid-year is always a particularly exciting time for BC wine enthusiasts and collectors: following the results of the All Canadian Wine Championships and then the BC Lieutenant Governor’s Awards in June, July reveals results of the highly respected National Wine Awards. The Nationals follow from the previous Canadian Wine Awards: many of the contributors to the defunct host publication Wine Access launched WineAlign a few years back, and continued the awards process. Amongst the many prominent accolades for BC wine coming out of this year’s competition were seven of 20 Platinum medals, awarded to the top 1% of wines entered. Needless to say there are plenty of superb wines from which to choose this month! 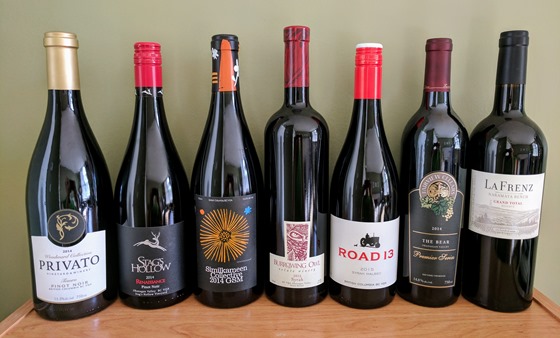 Privato 2014 Woodward Collection “Tesoro” Pinot Noir: The reserve-tier Pinot from Kamloops’ Privato is as good as gold this summer, receiving matching medals from both the All Canadians and Nationals. With a 91-point overall score at the Nationals, and a trio of glowing reviews from judges praising its irresistibility, the wine must have been within inches of a prestigious Platinum medal. While I visit the Okanagan and Similkameen valleys on a regular basis, making it up to Kamloops has been unfortunately neglected, but rapidly becoming an important expedition to consider. Fortunately wineries like Privato understand the importance of reliable retail channels as well, so I was able to find this fine bottle in Vancouver before it sells out. $46 Swirl VQA Store.

Stag’s Hollow 2014 Renaissance Pinot Noir: Another exciting new Pinot Noir came to me this month in my Stag’s Hollow Wine Club package, which is always a mystery collection until it arrives. Although the winery is already selling futures of the 2015 Renaissance Pinot Noir (only their sixth reserve tier Pinot in two decades), the current vintage remains well on hand, albeit only what remains of about 200 cases produced. It’s described as a bold, Californian-styled Pinot Noir, black-fruited with abundant French oak (50% of it new); although WineAlign judge Remy Charest pointed out “it has the stuffing to stand up to it,” in contributing to the Silver medal the wine received at the Nationals this month. With the winery suggesting aging through 2025 I’m in no hurry to crack mine open (and it’s secure under screwcap until that day comes). Winery Direct $40

The Similkameen Collective 2014 GSM: Expanding out from their Golden Mile Bench origins, Road 13 has made a major bet on the Similkameen Valley, showing off Cawston’s exceptional Blind Creek Vineyard in their Similkameen Collective project. The first release last year of GSM and Syrah-Viognier returned Gold and Platinum medals, respectively, from the 2016 National Wine Awards. This year’s GSM surged to Platinum status on the back of an excellent growing season that propelled the wine to “new heights,” in the words of WineAlign Judge Brad Royale. Despite the 100-acre size of Blind Creek, the grapes are spread thin across several clients, and only 126 cases of GSM have been produced (up from 104 last year though). The blend of 54% Grenache, 37% Syrah, 7% Mourvedre, and 2% Viognier found particularly strong favour amongst the judges this year, receiving a 92-point average score! Winery Direct $50

Burrowing Owl 2015 Syrah: Three Canadian Syrah were recognized with Platinum medals at this year’s National Wine Awards, and the pair of BC bottles include a surprising Naramata version (from Lake Breeze), plus this southern Okanagan stalwart. The generous vintage has resulted in a “ripe, rich, and meaty Syrah” that caught the attention of judges: David Lawrason’s 93-point review praises it for being “lavish and engaging” with “gorgeous textures.” In typical Burrowing Owl fashion the 18 months in oak were a complex affair, using a mix of 70% French, 15% American, and 15% Hungarian barrels of varying ages (30% new). Despite having been released just last month (with a limited availability warning) it is reportedly already sold out in the tasting room, so be sure to scour the shelves of local retail establishments! Winery Direct $35

Road 13 2015 Syrah Malbec: The friendly internal rivalry amongst Road 13’s various Rhone-inspired blends appears to continue this year as the contribution of 24% Malbec (and 3% each of Viognier and Gamay) has taken Gold at the National Wine Awards. A small lot Syrah blend with Mourvedre took Platinum last year while the Malbec inclusion only brought home Silver, now “redeemed” with a new vintage. Grapes from the winery’s extensive holdings in the south Okanagan and Similkameen valleys contributed to 347 cases of what the winery calls an “utterly hedonistic wine.” Tasting a sample at the winery while collecting my Club order I was readily persuaded to agree: the noticeable Malbec contribution provides for a darker and jammier profile than the excellent (and equally collectible) varietal Syrah I also obtained, with more tannin present in the rich and creamy palate. Winery Direct $37

Fairview Cellars 2014 The Bear: In the words of proprietor and winemaker Bill Eggert, 2014 was a “most awesome year,” allowing him to devote a larger percentage of the vintage than usual to his flagship red blend. The Bear has been an automatic purchase for many years given Bill’s veteran talent, hence providing me with a rotating six-bottle vertical that now yields a 2008 for current consumption. The wine is typically a Cabernet Sauvignon-dominated blend, including Merlot and Cabernet Franc, plus what Bill reports as “a small percentage of Malbec and an even smaller portion of Petit Verdot.” The grapes (with the exception of Malbec) come from the estate vineyard on the northern end of the Golden Mile Bench west of Oliver. The 650 cases assembled should last at least through the summer, but don’t dawdle! Winery Direct $40

La Frenz 2014 Grand Total Reserve: The icon wine at La Frenz is comprised of fruit from the Naramata Bench winery’s home “Rattlesnake” Vineyard, and their Golden Mile “Rockyfeller” Vineyard, which contributes Cabernets. Acquiring the newest release completes adds a sixth vintage to my collection, initiating another rotating vertical beginning with 2009. Having sampled all of those years (and beyond) at last year’s BCWAS-hosted vertical tasting, I look forward to what to the future holds. That anticipation includes this plush-textured blend of Merlot (42%), Cabernet Sauvignon (33%), and Cabernet Franc (25%), aged in (70% new) French oak for 22 months before blending and bottling of about 300 cases. Over at IconWines, reviewer Liam Carrier is equally confident in the wine’s future promise: his 93-point review strongly suggests more bottle age to “make the most of your investment.” Winery Direct $45

Posted by Russell Ball at 20:40 No comments:

Since Jay Drysdale opened his tiny Bella bubbly house to the public in 2014 I’ve longed to visit the winery he opened with wife Wendy on the northern Naramata Bench. It’s taken me three years to get there, past myriad vinicultural distractions on the route from Penticton, but I couldn’t be more pleased to finally make it. The northern Naramata tasting room is a working one, with far more space devoted to riddling racks than people. Despite the relatively remote location, the venue was hopping on the recent long weekend, with visitors choosing from amongst dozens of unique, vintage stems and coupes for tasting the lively list of wines before they sell out mid-summer. 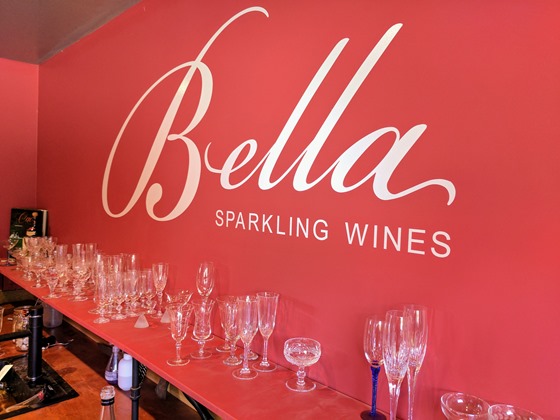 Jay & Wendy’s mantra of “Celebrate Today” was on point as Jay opened what seemed like countless bottles, so many that I honestly lost track of some! To keep at least some focus only Chardonnay and Gamay are used for a growing series of micro-lot (e.g., 50 cases) wines made all Brut Natural with no dosage. From the traditional method “Vineyard Series” of 2016 three Gamay from West Kelowna and a pair of Naramata vineyards offered plenty of crunchy red berries and stone fruit, while Chardonnay showed varietal character from Keremeos and Kamloops. Ancestrale method wines in the 2016 “Natural Series” encompass the first estate fruit in a blend of Chardonnay & Gamay, plus a lime and spiced apple iteration of the Keremeos Chardonnay, and two more Gamay, including a re-visit to the Westbank vineyard source. A major treat was also on offer as the single Reserve Series was opened to reveal a luxurious 2013 Chardonnay from Oliver’s Secrest Vineyard, full of classical Champagne character after 42 months on the lees. 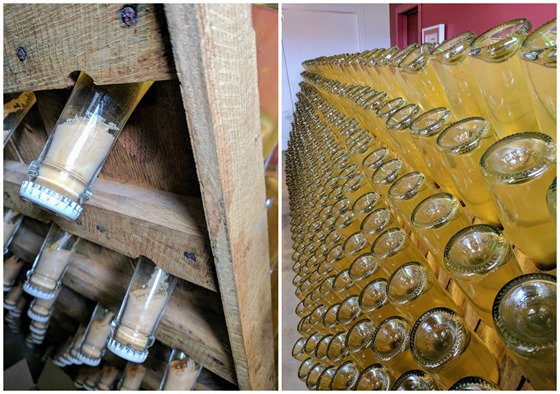 Collectible: 2016 Chardonnay - Eastside (Ancestrale). In this case Eastside refers to the Southern Okanagan, and the grapes come from Michael Bartier’s Black Sage Bench vineyard (on the east side of the valley) outside Oliver. One of several ancestrales making inroads at Bella, the wine undergoes a single fermentation that concludes in bottle (instead of the typical tank-based primary and a more controlled secondary in bottle). The technique is riskier and makes for some natural cloudiness, but the results can be stunning, as Jay reports: “You will never taste a more intensely flavored sparkling wine than an ancestrale.” The nose of tropical and citrus fruits leads into a buttered popcorn palate that made this one an immediate purchase, and at only 9.1% alcohol one really can celebrate today, or any day - at least while the 50 cases produced remain available!

Posted by Russell Ball at 16:40 No comments:

The Coulombe family winery is two years young this summer, since opening in 2015 (and tweaking the name since) with an enviable location on Highway 97 outside Oliver. Since having first tasted, and thoroughly enjoyed, the wines - presented by daughter Catherine Coulombe - at last fall’s Garagiste North Festival in Penticton, I’ve been eager to visit the winery in person. A couple attempts in May fell through, but as it turned out the shelves were nearly empty at the time, with a full slate of new releases anticipated in June. Among those new wines I heard about through the grapevine was a special release varietal Petit Verdot that piqued my curiosity. 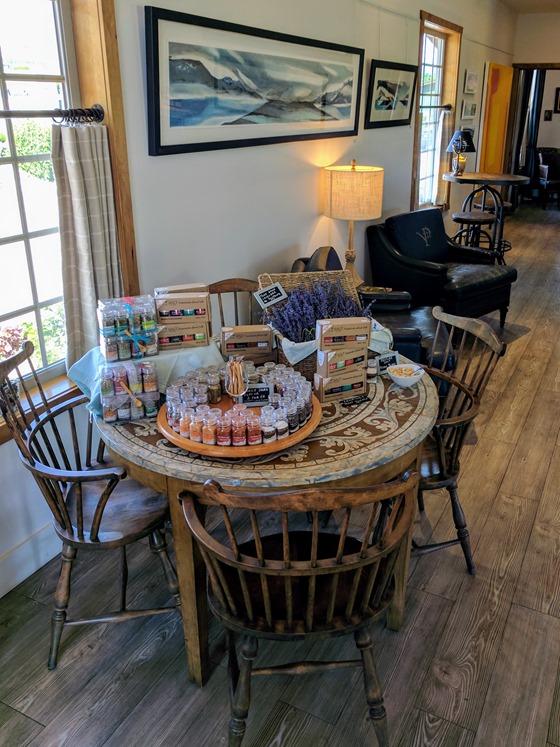 Arriving at seemingly the perfect time, I was fortunate enough to be guided through the portfolio (from a vineyard-view table on the back patio) by the ebullient Catherine herself, who serves as both knowledgeable Tasting Room Manager and Assistant Winemaker. The cozy lounge is richly decorated with art from Catherine’s talented sister Nathalie, and fine cheeses and charcuterie are available to enhance and extend one’s experience. All business, I delved straight into each of the eight wines on hand, all small lots of less than 250 cases. Highlights included aged Pinot Gris from 2015, richly textured with honeyed peaches; 2015 Chardonnay, lightly oaked for just four months and offering a pleasing popcorn profile; plus new 2016 Gamay, very pretty indeed with spiced cranberries and a fresh, silky, palate. Red blends from 2015 comprise “Petit Claret”, “Hidden Corner”, and “Compass”, a favourite with ripe berries, cocoa, and vanilla atop structured tannins from 33% Cabernet Sauvignon, 32% Merlot, 25% Cabernet Franc, and 10% Malbec. 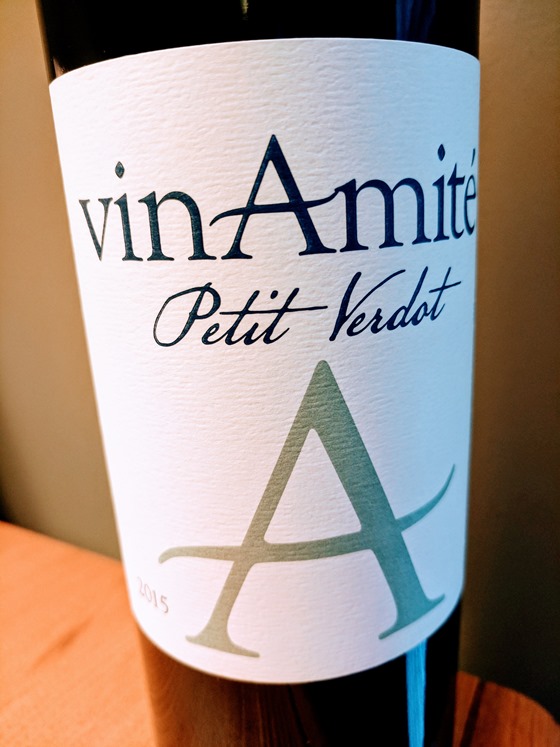 Collectible: 2015 Petit Verdot. Used most often in small proportions for blends, varietal Petit Verdot is rare worldwide, so it’s always exciting to see a local example. In this case, Proprietor Ray Coulombe set himself on a “mission”, as Catherine puts it, to obtain these grapes from a local partner grower in the south Okanagan. Only three (French oak) barrels were produced of what is hoped to be an inaugural vintage (there is a larger lot of 2016 aging in the cellar, and plans for 2017), divided amongst one new barrel, a one-year-old, and a three-year-old, where the wine spent 14 months before bottling. Having a taste at the winery revealed near perfect varietal character, with all the inky, floral aromas and powerful palate one would expect; the ripe, dark fruit is nearly Port-like in its concentration. Needless to say I look forward to longer-term aging of this particular rarity. Winery Direct $55

Posted by Russell Ball at 21:33 No comments: