With memories of last year’s successful Syrah blind tasting still fresh, the BC Wine Appreciation Society made the wise decision to continue what may become an annual tradition this month. This year the focus fell on Cabernet Franc, given growing enthusiasm for, and quality of, this sometimes overlooked varietal, particularly here in BC. A dozen local and international examples were collected, and legendary wine writer John Schreiner agreed to lead the tasting; although I’m sure well-known Cabernet Franc enthusiast Sandra Oldfield would have jumped at the chance if only her travel schedule had allowed it.

Given that Cabernet Franc ripens at least a week before Cabernet Sauvignon, and often two weeks earlier, it is ideal for cooler climate regions that struggle with under-ripe Cabernet Sauvignon. The majority of the world’s Cabernet Franc ends up in red blends, but an increasing number of BC wineries are finding success with single varietal bottlings, particularly Oliver winery Tinhorn Creek, owned by the aforementioned Sandra Oldfield. Led by Sandra as Winemaker Tinhorn has produced a single varietal Cabernet Franc for nearly two decades, extoling the virtues of the grape enthusiastically along the way. Tinhorn is almost certainly the only local winery producing three unique Cabernet Franc wines, including a Rose, and the recently-released reserve-tier, “Oldfield Series” version. 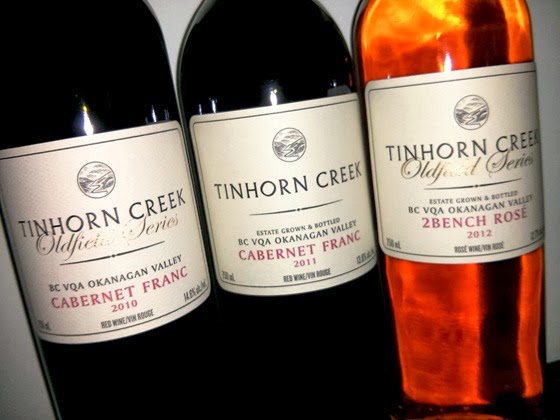 Naturally Tinhorn Creek’s “Oldfield Series” 2010 Cabernet Franc was a must for the tasting, and we were lucky to get some considering fewer than 400 cases were produced. Bottles from a few more BC wineries well-known for their success with the grape were natural additions as well. Burrowing Owl was awarded a Lt. Governor’s Award for their 2010 vintage last year, so adding the recently-released 2011 was only natural. From Tinhorn’s neighbour Hester Creek we managed to obtain the actual 2010 vintage that also brought home this highest award for BC wine, and the same for the 2009 release from Poplar Grove (who also won the Award in 2005 for their 2002 ‘Benchmark’ Cabernet Franc).

Also included in the local line-up was the estate-tier 2010 from Church & State, one of the few wineries producing more than one Cabernet Franc (their small lot “Coyote Bowl” series wine is very popular). Additional Golden Mile wineries – more Tinhorn neighbours – were represented by Cassini Cellars’ and Fairview Cellars’ 2011 vintages, both from small lots of only 400 and 280 cases respectfully. Rounding out the BC contribution was the first varietal Cabernet Franc from new Penticton winery Perseus, also coming to us from the 2011 vintage. 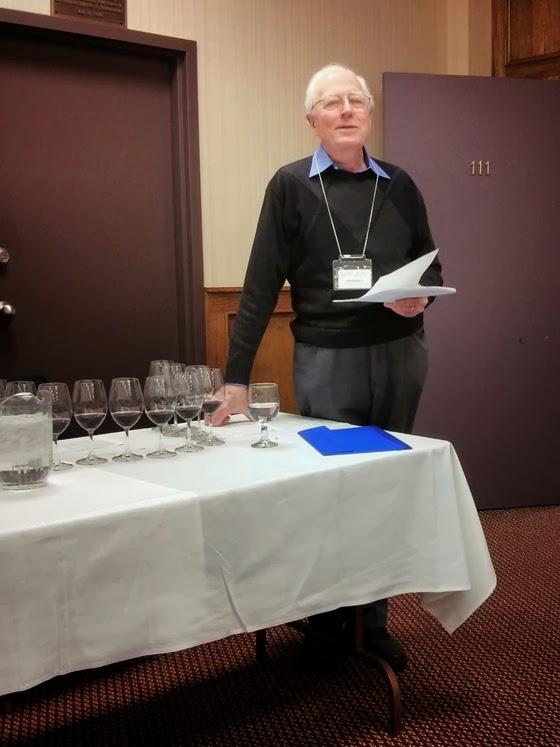 With twelve seemingly identical and unidentified glasses in front of them, guests took time to consider the task ahead of them while John Schreiner introduced us all to the evening’s grape star. He was quick to quote figures from the most recent BC vineyard census, and the Grape Crop Report, showing over 500 acres of Cabernet Franc in BC (as of 2011), with 1,371 tons reported harvested in 2012, finally edging out Syrah. John recounted the uncertain history of the grape, which may have emerged from the Basque region in the 12th century (as told by Jancis Robinson), but then again maybe not at all, according to others! He was clear that the full history of the grape will likely never be accurately known.

As the tasting got underway, those present were asked to rank their Top 5 preferred wines on the provided ballots. It soon became evident that even settling on five wines would be a challenge, with so many similarities between them – berries, spice, and minty notes emerged frequently. In time I was able to narrow down some favourites, and noticed I tended to favour fruit-forward, fresh, bright wines over those with heavier oak and savoury elements. Finally after a great deal of swirling and sniffing the ballots were collected and analyzed using a Borda Count spreadsheet. The judges settled on a ranking based on a 12-point system, and returned to enlighten the expectant crowd. 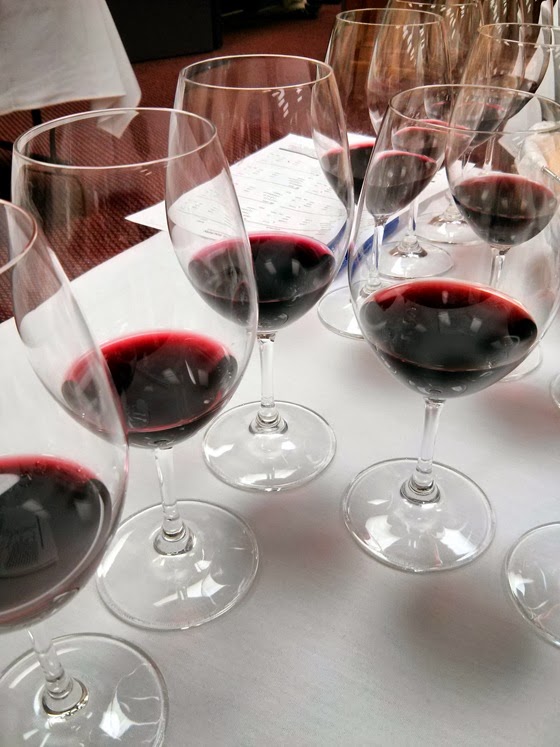 The unfortunate last place wine was soon revealed to be of French pedigree, from Domaine Bernard Baudry in the Loire Valley. With only two out of 49 ballots even mentioning this wine it clearly didn’t find favour with the crowd, likely due to a significant brettanomyces influence. Another outsider that fared surprisingly badly was the unusually cloudy wine from Ontario’s Vineland Estates in Niagara, which sadly may have suffered some low-temperature damage during transit across the winter-locked country.

The point scores jumped up for the next few wines, starting with Cassini’s newly released, tart, and youthful 2011, only the second year in which Adrian Cassini has produced a varietal Cabernet Franc (the first release being a very small lot of 85 cases from the 2009 vintage). From a few minutes up the road, the ninth place wine came from Bill Eggert at Fairview Cellars, showing cool raspberry and fruit leather. Ironically Bill focuses on, and is much better known for his Cabernet Sauvignon, but depending on the blend of his “The Bear” Meritage, there can be enough Franc left over for a varietal wine, as was the case in 2011. Another outsider wine came next, and this time fared moderately well, with California’s Cosentino coming in eighth. This young wine from the 2012 vintage was one of my favourites in fact, showing a very aromatic expression of fresh raspberries on a light, refreshing palate. This was followed (and essentially tied) in the rankings by Hester Creek’s smoky 2010, plus Church & State’s good value 2010 – unfortunately now sold out, as the 2011 vintage has emerged on store shelves.

The scores jumped up again to put Perseus in fifth place, with a charming wine made from Similkameen Valley grapes by former winemaker Tom Di Bello. Next, a one-point difference and virtual tie between the fruity finish of Burrowing Owl’s new release 2011 and Poplar Grove’s mature 2009 filled out fourth and third place respectively. With only two bottles remaining the final international wine was finally revealed: in second place, Argentina’s Trapiche winery clearly impressed the crowd with a light, easy-drinking, enjoyable example of the varietal. 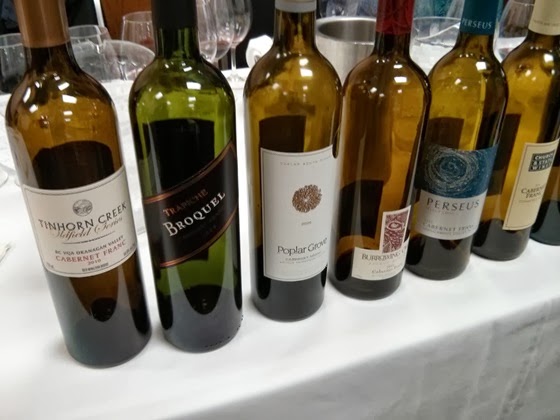 I ranked the Trapiche in my top five in fact, just behind the wine that eventually came in first – the 2010 “Oldfield Reserve” bottle from Tinhorn Creek. Ironically the Trapiche and the Tinhorn could not be further apart, both in price and in style: Sandra Oldfield’s first reserve Cabernet Franc showed a full-bodied palate rich in dark fruit, elegant complexity, and a long, spiced finish – much more cerebral than the quaffable Trapiche. Although Tinhorn bottle-ages all of their Oldfield Series wines before release, this one could certainly continue to develop with additional years in the cellar.

Clearly these wineries, and many more, are doing a great many things right with this grape. Including so many top-tier local examples in a blind tasting such as this was an incredibly valuable opportunity. Speaking with guests I could tell everyone enjoyed what was a very entertaining and educating seminar on this fascinating grape with a big future!

Posted by Russell Ball at 20:58 No comments: