Earlier this week the BC Wine Appreciation Society held a highly anticipated blind tasting of thirteen different local and international Syrah, including the top four wines from the 2012 Canadian Wine Awards! A full-house of fifty-plus attendees came out to try ten of BC’s best, plus dark-horse competitors from France, Australia, and California. All the wines were served and tasted blind, with only one person aware of the true identities: not even the evening’s MC knew precisely which wines about which he was waxing poetic.

Entering the room guests were greeted by the (literally) intoxicating aromas of nearly seven hundred glasses of ripe, rich Syrah, aerating for at least an hour before the doors opened. There’s nothing quite like that delicious, mouth-watering smell, which in similar BCWAS events from the past has reached all the way downstairs to the lobby of our host hotel! 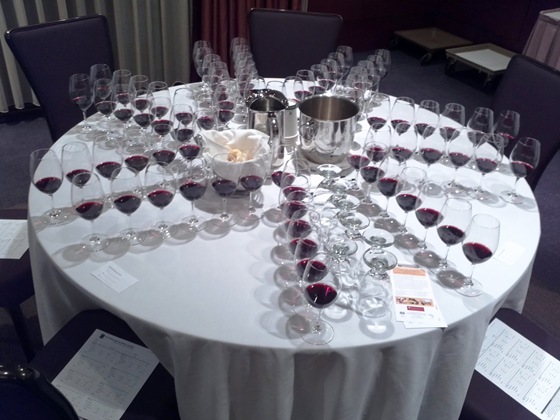 After a short introduction everyone soon dove into the task at hand, armed with printed tasting sheets that provided the option to score the wines along several dimensions. Within an hour we each needed to have come to some sort of conclusion regarding our Top Three favourites from the field of thirteen. The many local wineries that had so generously donated and discounted bottles – including some sold out vintages – were eager to hear the results, so there was a certain degree of pressure to take things seriously. After all, we were tasting, among others, the Canadian Wine Awards 2012 Red Wine of the Year (Quinta Ferreira 2009 Syrah), as well as Laughing Stock 2010 Syrah (CWA second-place red), Church & State 2010 Coyote Bowl Syrah (third-place), and Painted Rock 2009 Syrah (fourth-place). Both the Laughing Stock and Painted Rock wines have also recently received Lt. Governor’s Awards for Excellence in BC Wine.

I think many of us were quite curious how the palates of a group of (albeit experienced) consumers would compare to those of the professional judges who had already heaped so many accolades upon these wines. While everyone took it upon themselves to develop a tasting strategy, I myself decided a thoughtful sniff of each glass would be ideal before even opening my mouth. Perusing the aromas of each wine in short order was highly illuminating as it allowed particularly distinctive wines to be easily noted. I was able to quickly categorize them into those showing traces of rubber and leather versus those with a greater focus on jammy fruit. A handful showed noticeably restrained noses, while others possessed distinct minty, menthol characteristics. One wine in particular led to a number of comments at my table regarding its markedly “funky” aroma.

After I spent more time tasting and taking note of most of the wines it suddenly became time to hand in our ballots. Although I had been methodically scoring each wine using the provided sheet (with points for Appearance, Aroma, Balance, Body, Taste, Finish, and Quality) I had no time to add up the totals out of twenty points for a specific, quantitative judgement. Not willing to hold up the count I had to instead rely on my recollection of which ones in particular stood out for me; and with a quick listing of #10, #7, and #6 I submitted my vote for consideration. 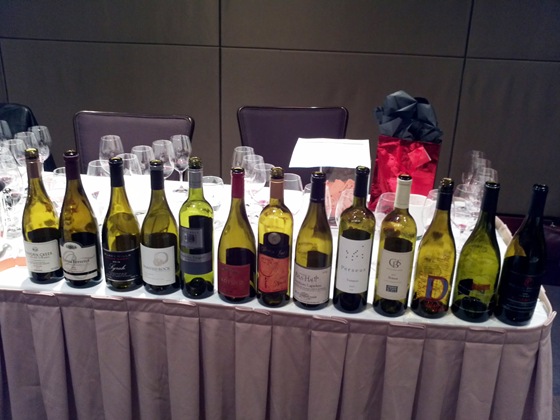 While volunteers from the Society Executive tallied the votes our host Tim Ellison proceeded to share his opinions on each wine while removing the paper bags to reveal the identities of each bottle in turn. His experienced palate was revealed when he correctly predicted the identities of both wine #5, the Australian Shiraz (Mitchell Peppertree Vineyard 2008), and wine #8, the French Syrah (Chapoutier Bila Haut Occultum Lapidem 2009). Neither of the international competitors seemed to have moved those of us in attendance, ultimately coming in at ninth and eleventh places respectively. Our sole American competitor, courtesy of local import winery Pacific Breeze, fared much better: their 2010 Reserve Syrah (from California) was ultimately ranked fifth by the crowd. I myself enjoyed its refreshing fruitiness, along with hints of mint chocolate and caramel.

With all the wine revealed and ballots counted, it was noted that the Top Three favourites were all comfortably in front, although every single wine had been named as at least one person’s personal favourite! Our overall favourite came out as Laughing Stock’s highly-awarded 2010, followed by the renowned Church & State offering from the same vintage, and then Painted Rock’s equally acclaimed 2009 release. Other BC wineries further down the list included Oliver Twist, Black Hills, Perseus, Orofino, Di Bello, Tinhorn Creek, and the aforementioned Quinta Ferreira. With the surprising exception of a lack of affinity for Quinta Ferreira’s offering, the overall favourites lined up perfectly with the (similarly blind tasted) Canadian Wine Awards results.

My own personal favourites veered a little from the overall preferences, although all had certain personally appealing characteristics in common: my Top Three were shown to consist of Church & State Coyote Bowl 2010, Oliver Twist 2010 (ranked fourth overall), and Orofino Scout Vineyard 2010 (ranked eighth overall). My notes for all three wines emphasized the rich, fruit-forward aromas and bright acidity. Seeing the mutual youthfulness of all my favourites was highly revealing, and has definitely prompted me to reconsider some of my cellaring strategies to favour enjoying at least some of our local Syrah while young and full of vitality.

When I ultimately totalled my own quantitative scores the next day I was amazed to see my point scores had lined up perfectly with my gut reaction during the balloting process: Church & State led the pack with 16 points, Oliver Twist and Orofino tied with 15 points apiece, as did Painted Rock and Pacific Breeze (14 points), followed closely by Laughing Stock with 13.5 points. Had we been asked to list our Top Five it’s fairly certain Painted Rock and perhaps Laughing Stock would have made it in as well: my notes certainly listed numerous positives for each. The deep colour and dark, rich fruit shown by Painted Rock was as enjoyable as the floral elegance and juicy flavours exhibited by Laughing Stock.

The entire evening was a highly entertaining and enjoyable experience, and I left pleased knowing I have nearly every one of the wines under examination in my collection already. Some may be consumed sooner than others based on this experience, and some will be given the benefit of patience and time before further examination. No doubt the other attendees found events equally enlightening, and left with further appreciation for our local terroir and talent.

Posted by Russell Ball at 13:01 No comments: