Starting in the esteemed Naramata Bench and working our way south, four rare Pinot Noir represent the majority of this month’s collection of top-notch BC wine. One of those Pinots brings significant pedigree with a newly awarded Lieutenant Governor’s Award for Excellence in BC Wines, joined by a second Award winner in the form of a hard-to-come-by Syrah I nabbed direct from the Osoyoos tasting room. The several wines featured this month span a range of vintages and releases, with older wines being both newly released or sourced from the last few cases. Each one has a story of place and time, and a spot in the cellar for the years to come. 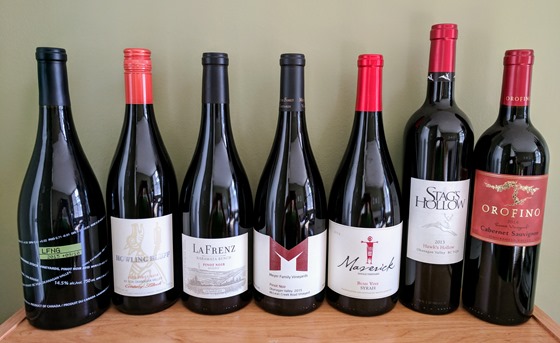 Laughing Stock 2015 Pinot Noir: The third year of Laughing Stock’s reanimated Pinot program ran headlong into the Okanagan’s hottest vintage on record, making for a big, bold wine in contrast to the elegant cool-climate Pinot Noir more common to the valley. The new estate vineyard the winery is cultivating on the Naramata Bench is supplemented by two nearby high-bluff properties at present, and the combination yielded 300 cases from an unusually early September 10 harvest. After 15% was fermented whole cluster in an oak tank (and rest whole berry), the wine spent 14 months in French oak, just 17% of it new and three quarters third use. Priority access for Wine Club members guaranteed me a bottle during a recent visit, as the “Small Cap” release won’t last very long. Winery Direct $38

Howling Bluff 2013 Century Block Pinot Noir: It will be a celebratory summer down the road at Howling Bluff, as Luke Smith proudly accepts his fourth Lieutenant Governor’s Award - and the third for Pinot Noir. This tiny lot of about 80 cases reserved from the estate vineyard’s Century Block went through a soft-release this spring as Luke tried to determine its fate after extensive bottle aging: lucky members of the BC Wine Appreciation Society enjoyed the wine with him during a dinner at Glowbal just last month. Upon my first taste it launched a striking aroma of orange pekoe tea before the juicy cherry palate brought a burst of fruit that grew over time. With the province’s most prestigious wine award in hand sales in the wine shop have opened up, with a price set to keep it in stock at least in the short term. Winery Direct $75

La Frenz 2015 Reserve Pinot Noir: The high heat of 2015 made for more powerful Pinot from Naramata neighbour La Frenz. Jeff & Niva Martin’s seven-acre Desperation Hill vineyard grows five clones, and the best blocks of the numbered four (91, 115, 667, and 828) were selected to comprise 400 cases of the Reserve tier in 2015. The winery clearly feels this “knockout” is a notable departure from the previous vintages, describing it as having a deeper concentration of flavours, dense palate weight, and plush mouthfeel. At this year’s Dan Berger International Wine Competition in California, the Reserve Pinot contributed to La Frenz’s domination, which included four Gold medals. The wine is also headed to the prestigious International Pinot Noir Celebration in Oregon this July as BC’s only entrant, and (by exclusive invitation) to the Six Nations Wine Challenge in Australia come August. Winery Direct $35

Meyer 2015 McLean Creek Road Pinot Noir: At least five different Pinot Noir of different tiers are included in Meyer’s portfolio (six if you include the new varietal Rosé), so release dates are staggered, providing Club members with the workhorse home vineyard version this month. Harvested in late September, the free-run juice spent 11 months in (25% new) French oak before bottling of 600 cases last fall. The winery feels this muscular version is suitable for long-term cellaring (2017-2024), and the deeper fruit flavour profile was observed by John Schreiner at this spring’s Okanagan Falls Tasting: his 91-point review speaks of “spicy black cherry and cloves.” It sounds a little heavier than last year’s well received vintage, showing the warm, dry weather of 2015, but I’ve got patience to let the structure coalesce until at least 2020. Winery Direct $40 (and available in Norway as of July!)

Maverick 2014 Bush Vine Syrah: Showing the southern Okanagan’s continued superiority in Syrah, both of those who received Lieutenant Governor’s Awards this year came from the region. While The Hatch found favour in the Osoyoos East Bench, Bertus Albertyn’s experiments with unusual Goblet-trained (“Bush”) vines north-west of town got the nod as well. The small winery of the Albertyn family is a first-time winner for this small lot (185 cases) of whole-bunch, foot-stopped Syrah. Fermented in one large 3,400-liter vat, it then spent 18 months in older French oak before bottling last September. The meaty aromas lead into admirable intensity on the palate, where quintessential black, spicy fruit make their mark. Winery Direct $32

Stag’s Hollow 2013 Hawk’s Hollow: A pleasant surprise in my recent Wine Club shipment from Stag’s Hollow came in the form of this uncommon Cabernet-Syrah. Although officially released last summer - to a Silver medal at the 2016 National Wine Awards - Club members were treated to some of the remaining bottles (only about 100 cases were produced). The blend sees 45% each of Osoyoos Syrah and Oliver-area Cabernet Sauvignon accessorized with 10% Osoyoos Petit Verdot. Having spent 15 months in French oak (40% new), it seems destined for even further bottle age to soften the full-bodied tannins and further develop the balanced palate. Despite being only the second vintage of this wine produced since the inaugural 2012, it is destined to be the last, as other directions take priority in Winemaker Dwight Sick’s packed portfolio. Winery Direct $40

Orofino 2014 Scout Vineyard Cabernet Sauvignon: Having two different Similkameen Valley vineyard sources for Cabernet Sauvignon, John & Virginia Weber can release an enviable pair of wines each year. The Passion Pit Vineyard iteration was here and gone in short order late last fall, but this spring the 250 cases from Cawston’s Scout Vineyard were deemed ready for release after some aging (following bottling last September). Given the quality of the vintage I expect to relish this well-priced expression of Similkameen terroir in the years to come. While discussing Orofino’s growing vineyard sources and new Cabernet Franc focus this month, John Schreiner had nothing but praise for the Scout Sauvignon, polished and elegant after 20 months in French oak. Winery Direct $29

Posted by Russell Ball at 20:54 No comments: