In years past the month of the Vancouver International Wine Festival would be my shopping bonanza for both international and domestic bottles. Now, having significantly increased the frequency of my visits to tasting rooms in person, I no longer need to rely as heavily on the Festival store to fill my cellar with BC’s bounty. The Festival comes at an odd time of year, before most local wineries have bottled new vintages, so it can be a time to find the last reserves of some (saved for the Festival), or alternatively, advance access to those yet to be released. Festival purchases and a few recent winter treats make up this month’s collectibles. 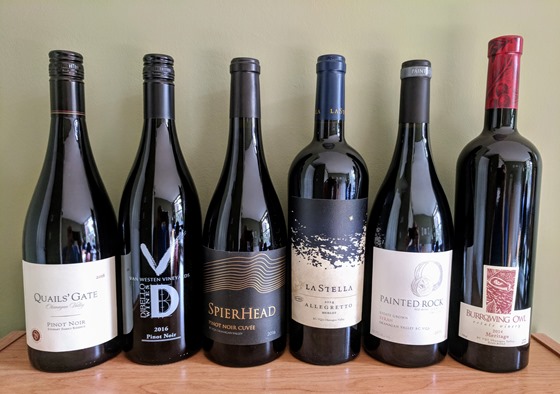 Quails’ Gate 2016 Stewart Family Reserve Pinot Noir: I can often rely on the Stewart family to bring out the big guns for VIWF, and the fact they previewed this upcoming vintage of the winery’s flagship red speaks volumes. Not even mentioned yet online, the 2016 was being poured and purchased in the Festival tasting room, showing off a remarkably approachable profile at this young age. The highly expressive nose and rich palate were balanced and fresh, and will no doubt age well for many years, but made for easy enjoyment well before the official winery release. Winemaker Nikki Callaway brought in ideal West Kelowna fruit from an exceptional growing season to assemble 1,100 cases after ten months in French oak. The Stewart Family Reserve is a consistent benchmark for rich, New World Pinot Noir in BC. VIWF Store $60

Van Westen 2016 “VD” Pinot Noir: Just in time for Valentine’s Day, Rob Van Westen’s petite Pinot project offers a much less well known example, and mightily hard to find at that. Repeat customers get first notification before Rob spends a mid-winter week stocking store shelves and hand-delivering new releases while the vines slumber. The good news is this niche collaboration between Rob and veteran winemaker Tom DiBello has grown in quantity by 25% since last year, now reaching a grand total of 105 cases. The grapes come from the Granite Ridge vineyard on the Naramata Bench, planted to the meaty Pommard clone, and aged nine months in French oak. The generous vintage has yielded another obliging bottle, with softly textured, ripe tannins atop the underlying structure. It may be tempting to crack that screwtop in the short term but here’s another good cellar candidate for those with patience. Winery Direct $40

SpierHead 2016 Cuvée Pinot Noir: The East Kelowna winery on Spiers Road may be changing their name to Spearhead for the sake of convenience but the only change to the wine is it keeps getting better. Supervised by new General Manager Grant Stanley (via Quails’ Gate and 50th Parallel), the growing portfolio holds five Pinot Noir (six if counting the White Pinot) at present, with the Cuvée coming out on top. While Van Westen makes the exception for Pinot, Spearhead is all in on the variety, taking advantage of their ideal estate terroir and that of trusted partners. Cuvée 2016 is a 400 case blend of the best barrels from four clones (115, 667, 828, Pommard) following ten months in French oak. John Schreiner noted the boldness of intense, even jammy fruit flavours in January, while the GismondiOnWine team offered 90+ points (and recommended three years in the cellar) just last week. Winery Direct $44

LaStella 2014 Allegretto Merlot: A tiny “Pie Franco” logo on the label provides a hint of this wine’s special status. The single vineyard Merlot that sits just below the flagship Maestoso in LaStella’s portfolio is planted on its own rootstock in high drainage white silica sand. This “pie franco” accomplishment is rare in a global industry dominated by grafted vines seeking to escape the ravages of phylloxerae. The estate Stagg’s Vineyard on the west bench of south Osoyoos has just over four acres of Merlot (alongside four more of Syrah), and provided for 275 cases in 2014, resulting in a wine reserved exclusively for Club members. The winery claims a certain purity in flavour is obtained from these own-rooted vines, offering a taste of Merlot in its most authentic form. Winery Direct $69

Painted Rock 2015 Syrah: With their sole white wine (Chardonnay) sold out, the Painted Rock team placed particular emphasis on their several superb reds available at the VIWF. The Syrah from the Skinner family’s Skaha Bench estate vineyard south of Penticton has been a favourite in my household for many years. The effects of a warm vintage are apparent in what Anthony Gismondi describes as a “hedonistic nature” sure to find many fans despite a bit less complexity than normal. Liam Carrier’s 92-point review on IconScores offers an intriguing description of blood orange, mint, and vanilla in a “mind-blowingly intense” wine worthy of supplanting the winery’s premier Red Icon. Fortunately 1,700 cases were produced, after 18 months in 30% new French oak, giving many a chance to try it for themselves and be the judge. VIWF Store $46

Burrowing Owl 2014 Meritage: In an age where every winery has a flagship red with a proprietary name Burrowing Owl has stayed with good old fashioned Meritage – straightforward and descriptive. A bottle goes into my vertical collection each year, making for a nice exploration of the vintage at one of the South Okanagan’s most noteworthy wineries. The blend of 32% Merlot, 23% Cabernet Franc, 23% Cabernet Sauvignon, 11% Malbec, and 11% Petit Verdot was bottled in August 2016, after 21 months in oak (18 months varietally independent), three quarters French. A near endless stream of compliments have come from the WineAlign judging team, yet despite unanimous 90+ point scores the same team awarded a moderate Silver medal at the 2017 National Wine Awards – an ode, perhaps, to the uncertainties of competition. Winery Direct $50

Posted by Russell Ball at 21:49 No comments: