In offices across the world, the fiscal year is coming to a close and people and plans are wrapping up, but in the (northern hemisphere) wine world this means springtime! By now the fall harvest fermentations are in barrel, what was in barrel is being bottled, and warehouse space is getting the squeeze; it’s one of many reasons for new releases. Another reason being simply that bottle aging of old vintages has concluded and it’s time to share the results with the world. This month welcomed everything from a triplet of fresh, young Pinot Noir looking for some cellaring, to big bold red heavyweights that can still manage further slumber despite their more advanced years. 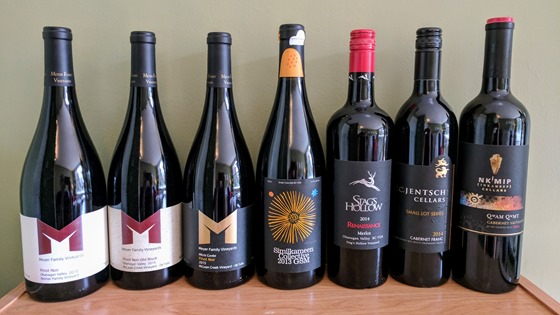 Meyer 2015 Reimer Pinot Noir:  The calendar year’s first Wine Club shipment from Burgundian specialists Meyer included the both the attractive 2015 Tribute Chardonnay, and one of their vineyard-specific Pinot Noir. Despite the oppressive heat of 2015 and the early start to harvest, the Reimer Vineyard fruit in East Kelowna wasn’t harvested until mid-October, then given 11 months in (27% new) French oak before 400 cases were bottled in September. Interestingly, Doug & Dawn Reimer - from whom the French clone grapes originate - recently launched their Mirabel Vineyards label, with the inaugural 2015 Pinot Noir. Initial trepidation about the future of Jak Meyer’s access to their well-respected grapes seems to have been tempered recently with word the partnership is expected to continue for the near future. Winery Direct $40

Meyer 2015 Old Block Pinot Noir: The opportunity to add a couple bottles to my four-pack of Club-designated wines allowed acquisition of some of the smaller production Pinots from Meyer. The Okanagan Falls estate vineyard’s one acre “Old Block” originates in 1994, but couldn’t be exclusively bottled until additional (2009) plantings had matured enough for production (of the “regular” McLean Creek Road Pinot Noir). By 2014 that time had come and the first lot of 205 block-specific cases were acclaimed at the National Wine Awards last year. Slight growth to 234 cases in 2015 comes with high expectations as a result, but the release is so recent few have yet had a chance to share their findings, and I’m afraid my single precious bottle is destined for the cellar until next decade. Winery Direct $50

Meyer 2015 Micro Cuvee Pinot Noir: Not only are the lots of wine at Meyer separated by vineyard, and block, but further barrel selection is conducted to yield the pinnacle of production. A small lot of Chardonnay sees similar treatment, and in 2015 the Micro Cuvee Pinot Noir came from two puncheons and one barrel of Pommard Clone 91, with the winery going so far as to detail the three French forests from which the vessels originated. The Pommard block was harvested in late September, about a week before the Old Block mentioned above, and likely saw the same 11 months in oak as the other lots, with the difference coming down to the unique expression of that one new puncheon, a second one-year-old, and the two-year-old barrel (yielding 110 cases). The Micro Cuvees (both Chardonnay and Pinot) are reliably the best of what is already a top-tier portfolio from Meyer. Winery Direct $65

The Similkameen Collective 2013 GSM: I was able to obtain a bottle of this joint venture’s (inaugural vintage) Platinum-medal-winning Syrah-Viognier last fall, but had to painfully pass on the GSM at the time for budgetary reasons. Wouldn’t you know, it showed up in this month’s Road 13 Wine Club selection, as the Golden Mile winery is one of the key partners (and actually makes the wine). I’ve been coveting a bottle since John Schreiner had a chance to taste the launch portfolio last spring, and found the “bold and elegant” blend worthy of 93 points in his opinion. Having been awarded Gold at last summer’s National Wine Awards, it’s a special rarity as one of the few instances of BC Grenache from this growing category. I look forward to the day I can attend a Grenache gathering just like the upcoming BC Pinot Noir Celebration! Winery Direct $50

Stag’s Hollow 2014 Renaissance Merlot: One of several varieties grown at the Okanagan Falls estate home vineyard, Merlot - and this reserve tier version - has for many years been the flagship from Winemaker Dwight Sick’s diverse portfolio (even as Grenache sneaks up from behind). The newest vintage has emerged from the wings as the remaining 2013 is sold through the wine shop; my bottle came in this month’s Wine Club shipment. Fermented and aged in (50% new) French oak, the 2014 Merlot aged for 15 months before being blended with 10% Cabernet Sauvignon, as is the common practice with this particular wine. While the newly introduced screwcap closure may suggest otherwise to some, further cellaring would be best, although the winery admits it is “more approachable than the past two vintages.” I’m sure all the dark fruit and mocha under that cap would show quite well at present after decanting however. Winery Direct $40

C.C. Jentsch 2014 Small Lot Cabernet Franc: Chris Jentsch was present in person at last month’s Vancouver International Wine Festival, pouring a few of his Golden Mile Bench wines, all of course for sale in the on-site BC Liquor Store. A few bottles of the rare and pricey Cabernet Franc remained available afterwards and were subsequently shifted to local store shelves, at which point I was able to rectify having missed this charmer at the Festival. Initial release of 151 cases last summer was met with praise from John Schreiner, who felt 92 points best summarized this “ripe and exuberant wine.” Having been bottled just before release, after 16 months in oak, further maturity in bottle seems to have left it none the worse for wear: “a few months down the road from our last tasting this Cabernet Franc remains impressive,” said Anthony Gismondi at the time of the Festival, when 90 points was still felt well worthy. BC Liquor Stores $58

Nk’Mip 2014 Qwam Qwmt Cabernet Sauvignon: Optimal conditions in 2014 ensured the ideal opportunity for ripe Cabernet Sauvignon from our (technically) cool climate terroir, and Winemaker Randy Picton’s work with the variety is always one of the first places to look for quality. Harvesting fully developed grapes at the very end of October led to 18 months in French oak before release last year, from which time it remains broadly available given expected large production. Big compliments came from GismondiOnWine after a few vintages away: while newer contributor Treve Ring assigned “only” 89 points, the usually conservative Gismondi himself practically gushed in his 91-point review last December, finding this big red to be “in perfect balance” and clearly at the top of the tier for the variety in BC. BC Liquor Stores $35