Spending ten days in Osoyoos mid-month provided an opportunity for some very carefully measured wine shopping, both in the local tasting rooms and the region’s well-stocked retail establishments. At the end of my trip I was thrilled to attend the Garagiste North Wine Festival, where Penticton’s Fairview Liquor Store was able to actually sell the many small production wines on hand – a momentous new capacity only recently endorsed by the provincial government. Whilst dragging their heels through our puritanical liquor laws in many other respects the government’s loosening of arcane rules has at times been instrumental in improving consumer access. 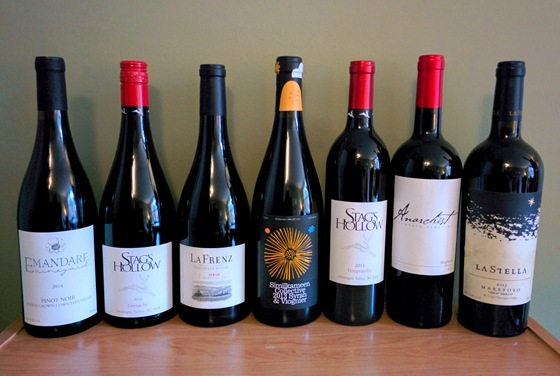 Emandare 2014 Pinot Noir: Earlier this year I was able to attend a tasting of the first wines from Mike & Robin (“Em” and “Are”) Nierychlo’s North Cowichan vineyard. At Marquis Wine Cellars owner John Clerides was more than happy to host the couple, and gushed to me about the upcoming Pinot Noir he had sampled: noteworthy praise repeated in his own later blog post. In the organically and dry-farmed fourteen-year-old vineyard’s two-acre block of Pinot Noir the vines were cropped very low to 1.5 tons per acre, wild fermented in neutral puncheons, and 80 cases worth then aged for a year in neutral French oak. Seeing Mike’s transition from enthusiastic local wine blogger to winery owner has been impressive; he is precisely the type of honest winemaker needed to further enhance the industry. New District $46

Stag’s Hollow 2015 Grenache: Friday, September 16 was International Grenache Day this year, and being in the Okanagan at the time I couldn’t miss marking the occasion where a rare Canadian Grenache effort is building steam. Although a handful of local wineries have used the grape in blends (Red Rooster and Road 13 amongst them), Stag’s Hollow Winemaker and self-professed “Granachista” Dwight Sick’s pure varietal iteration is believed to stand alone. Following a micro-lot of “seductively delicious” 2014 Renaissance (reserve) the fourth vintage is finally ready to rock after a blend of fruit from Osoyoos and Penticton spent six months on the lees before blending in 12% Syrah and bottling this June. A strong Silver medal at the National Wine Awards in July left the judges very impressed with “one of Canada’s great Grenache triumphs.” Winery Direct $30

La Frenz 2014 Syrah: After many years producing a fine “Shiraz” from their Rockyfeller Vineyard on the Golden Mile, Australians Jeff & Niva Martin finally relented and adopted the Syrah nomenclature. As John Schreiner reported this month, new (Australian) Winemaker Dominic McCosker feels the finessed fruit on hand better suits a Rhone style, going so far as to co-ferment with Viognier as well. John’s admiration for the firmly textured floral white pepper aligns with praise from the WineAlign judges in naming the wine as one of six Gold medal BC Syrah at the Nationals. After a fruit-focused twenty month maturation in (just 15% new) French oak, this should age very nicely into the elegance expected of it. Winery Direct $28

Similkameen Collective 2013 Syrah Viognier: Not only did BC Syrah obtain a clean sweep of category Gold in the Nationals, but a further three were awarded Platinum medals for representing the top 1% of all wines in the competition. Leaping out of the gate with one such medal was a new collaborative project anchored around Cawston’s Blind Creek Vineyard and some very wise partners, including Road 13. Recognizing the vineyard’s potential early on led to the formation of The Collective, where Winemaker J-M Bouchard has assembled small lots of intense and powerful reds (plus a sumptuous Roussanne). The initial Syrah has garnered wide praise in short order for just 83 cases: the English translation of Judge Michelle Bouffard’s acclaim entertainingly labels it as “overly seductive” – can there be such a thing?! Winery Direct (Garagiste Festival) $45

Stag’s Hollow 2013 Tempranillo: Included in my latest wine club shipment was a BC rarity, and a complex iteration of Tempranillo at that. Grapes from the Osoyoos East Bench, the Okanagan Falls estate vineyard, and the Naramata Bench were combined with 9% Cabernet Sauvignon, 4% Syrah, and 2% Petit Verdot from Oliver and Osoyoos. The Tempranillo spent 15 months in 50% new American oak before the smaller components (from second fill French oak) were blended in prior to a year of bottle aging before release of 525 cases. Entering the newly bottled wine in the 2015 National Wine Awards last year yielded a Silver medal and fascinated praise from head judge David Lawrason, who personally felt gold was warranted. A Gold medal at this spring’s All Canadian Wine Championships provided vindication. Winery Direct $30

Anarchist 2014 Mayhem: The remote Anarchist Mountain vineyard of Andrew and Terry (Meyer) Stone is becoming known for high quality Pinot Noir. However, one acre of the 4.5 acre vineyard, now two decades old, includes Merlot that the pair have now added to their small portfolio. I tasted a very memorable barrel sample of this inaugural release during the spring’s Garagiste Festival in Vancouver, and experienced the final product at this month’s festival in Penticton, where a few of the 90 cases were finally for sale. Andrew’s planned inclusion of Cabernet Franc in a year or two will yield a blend, hence the lack of a varietal designation at present. Without a winery on the Osoyoos property the Merlot has been expertly shepherded by Mark Simpson at his Okanagan Falls BC Wine Studio. Winery Direct (Garagiste Festival) $40

LaStella 2013 Maestoso Merlot: A recent newsletter from LaStella lamented the cost of striving for excellence in this flagship wine: 50% of the vineyard blocks were disqualified due to untimely rain during harvest. As a result, a mere 188 cases were recently released for purchase (by a worldwide following no less). Generous sampling opportunities of this intense and age-worthy wine over the years have left me committed to exploring every vintage, albeit one pricey bottle at a time: I only recently opened my bottle of the first vintage from 2006. The newest release was tasted with great anticipation by John Schreiner this past spring, and has been described more recently in detail by Liam Carrier in his 93-point review. Maestoso is expensive to produce, and thus purchase, but is an invaluable study of purity and distinction in BC winemaking. Winery Direct $104