The BC Wine Appreciation Society swept the Similkameen and Southern Okanagan valleys on their eleventh annual winery tour this month, and I was lucky enough to nab myself a spot on the bus again this year. My wife and I had to be quick to sign up when the tour sold out in a single day earlier this summer, filling a 56-seat bus in record time! Tour guests travelled far and wide in one busy weekend, visiting ten wineries from Keremeos to Oliver, where we looked forward to the generous hospitality for which BC wine country is known. 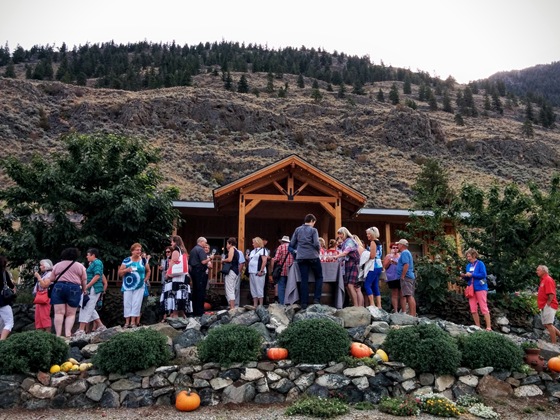 Departure from our Osoyoos hotels came bright and early Saturday morning, with a 9am appointment awaiting us at the small family-owned winery Hugging Tree outside Cawston. Owners Walt & Christine Makepeace still sell much of their grapes to neighbouring Similkameen wineries, but producing a couple thousand cases from their thirty acre vineyard is enough to keep the whole family busy, including their winemaker son Brad. All were on hand to welcome the bus of eager wine aficionados with a generous selection of cheeses and even homemade tarts. Just as we started enjoying the wines a loud bang shook the wraparound deck on which we had congregated: stunningly, a minor earthquake had just struck the region! Looking to make our own impact, guests wasted little time stocking the bus with cases of citrus-apricot 2014 Viognier, fruit-forward 2012 Merlot, and structured, plumy 2012 “Telltale” Cabernet-Merlot, the only wines remaining in stock after a busy summer season. 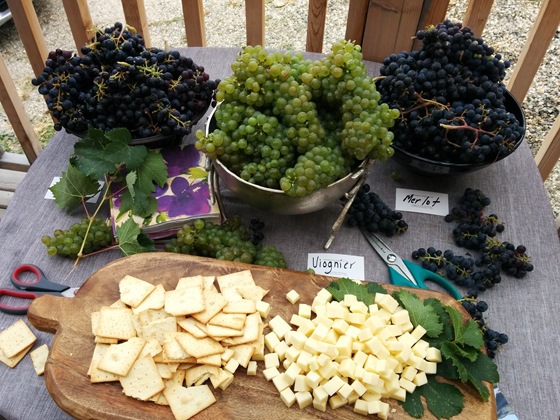 By 10:30 we had bid adieu to the Makepeace family and motored up the road to Eau Vivre Winery, for a garden tasting of the many award-winning wines. Eau Vivre opened in 2007, the same year Walt & Christine were planting their new vineyard, so owners Dale Wright & Geraldine Estin have a few years’ head start on the friendly competition. The refreshing 2014 Riesling helped prepare our palates with lime cordial flavours and a smooth, clean finish. Soon Dale was cracking open his many reds, sourced from premium vineyards throughout the Similkameen and finished by Winemaker Anthony Buchanan since 2013. The newly released 2014 Pinot Noir follows in the footsteps of two past Lieutenant Governor’s Award-winning vintages, and impressed with a toasty forest floor and cherry profile helped along by wild fermentation. Cabernet Franc and Malbec from the 2013 vintage offered chocolate cherries and juicy smoked strawberries respectively, before the 2012 “Buddhafull” red blend showed the benefit of age in an elegant full bodied raspberry palate. 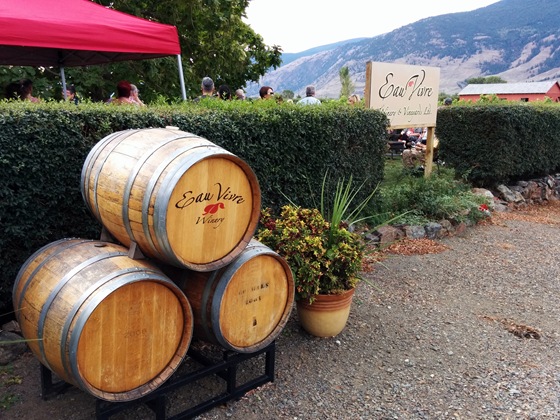 We whirled through the wine shop for more spoils and back on the bus headed to Clos du Soleil’s Keremeos estate. There Managing Director and Winemaker Michael Clark led tours of the organic and biodynamic vineyard and clean new winery, beginning to fill up with freshly harvested white grapes. Split into two groups, we alternated between touring and tasting, as the team had pulled out all the stops and opened virtually everything available. Highlights included the extremely rare 2014 Estate Reserve White, a Sauvignon Blanc-Semillon oozing with mineral-driven baked pear in a vibrant, creamy palate with years ahead of it - superb at present with appetizers of charred chicken skewers. The similarly exclusive 2012 Estate Reserve Red burst with expressive, elegant floral aromas, ripe tannins and rich fruit still growing in complexity as it ages into even further greatness. Even the upcoming Grower’s Series 2014 Syrah made it into our glasses: the winery’s first varietal Syrah is destined for wine club members before wider release this fall. The heady nose of Black Forest Cake elicited high praise even before the fresh wild berry palate and soft peppery finish. 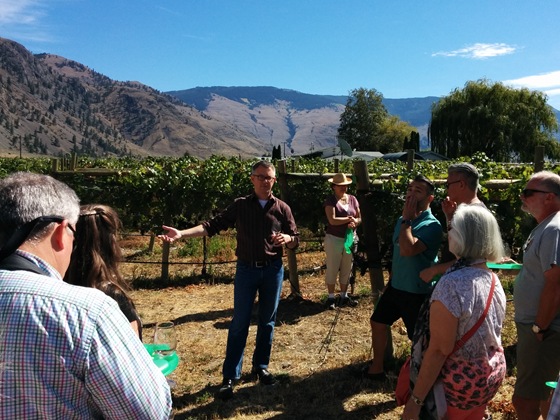 The sense of community exhibited in the Similkameen Valley was particularly evident as Clos du Soleil welcomed several other local wineries to join us for lunch and show off their own prized bottles. A spectacularly varied and lavish spread from Shayna & Shulman Culinary Adventures had us munching on antipasto platters, cheeses, and charcuterie before swinging by the grill for creative oyster mushroom hot dogs, seemingly endless sliders, and warm fresh cornbread. The shaded crush pad made the perfect location for samples as we nibbled and noshed our way into mid-afternoon. Orofino’s John & Virginia Weber were present with their exciting 2015 Wild Ferment Syrah and racy 2014 Hendsbee Vineyard Riesling. George Hansen of Seven Stones broke out his iconic 2013 red blend “The Legend”, while Sara Harker masterfully juggled bottles and baby to pour several intensely-flavoured sparkling and dessert fruit wines from her family’s Rustic Roots. The well-loved Gamay of Tim Cottrill’s Robin Ridge shared the spotlight with fragrant cocoa from a 2013 Cabernet Franc plus the elegant new “Signature Series” 2012 Meritage. Alongside the highly-regarded wines he produces at Forbidden Fruit, Nathan Venables also introduced his small lot Dead End Cellars label, including the deep and dark “Game Over” 2013 Tannat-Malbec. 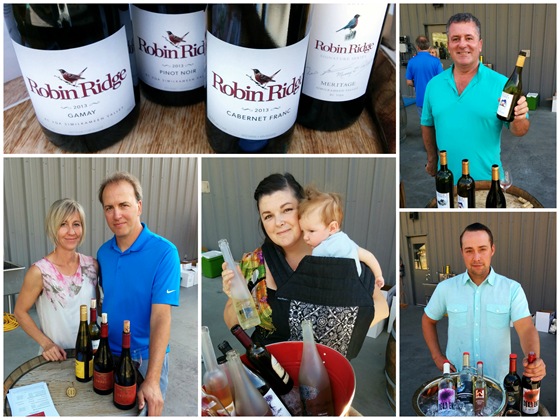 The hours seemed to fly by with that many wines to taste and soon the tour organizers were rounding up the crowd for our next winery visit, literally right next door! Since the Baessler family took over the former Herder winery and vineyard in 2014 their small Corcelettes label has grown a great deal, and Winemaker Charlie has made good use of the full tanks and barrels he inherited. Using the aged wines of (recently, and sadly deceased) Lawrence Herder Charlie has produced a 2011 Reserve Pinot Noir, 2011 Meritage, and 2012 Merlot, plus a non-vintage bubbly “Santé”. The existing Corcelettes “Menhir” flagship Cabernet-Syrah remains in fine form, with the new 2014 expressing inky sausage and full bodied black fruit. As a very special treat, the Baesslers opened their micro-lot of 2014 “Vendange Tardive” late harvest Gewürztraminer before we departed. Only 16 cases of this luscious libation were produced (harvested under icewine conditions), and we savoured aromas of burnt honey and concentrated lychee before the delightfully clean, bright, apple pie finish. 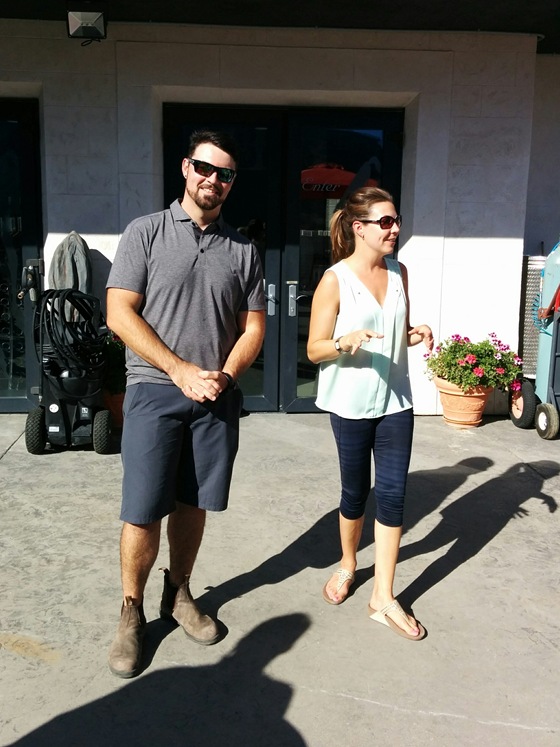 Heading back towards Osoyoos we had one more stop to make before poolside refreshment and a highly anticipated group dinner. Although the Webers had shared a few of their wines with us at lunch, they had another treat in store during a short visit to Orofino. Not only were tour guests given a chance to pick up their earlier wine orders, but John and Virginia offered an abridged vertical tasting of the flagship “Beleza”, going as far back as 2006, when it was known merely as Merlot-Cabernet. That final vintage before the new nomenclature (once Petit Verdot was available for inclusion) was still fresh and juicy, with lots of life remaining in the rich palate. The heat of 2009 had rendered that vintage an aged character beyond its years, with prune and spicy mocha flavours, while cool 2011 showed the opposite effect with an elegant nose of menthol and herbs before a long smooth finish. The newest release from 2013 was youthfully delicious, ripe and fruity with leather and brown sugar to carry it through the years. 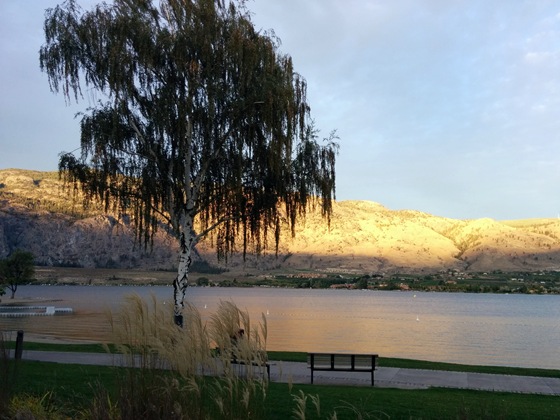 Once everyone had freshened up back in Osoyoos we all met at Watermark Beach Resort for a Winemaker’s Dinner with proudly organic Forbidden Fruit Winery. Owners Steve Venables and Kim Brind’Amour were on hand to introduce even more wines than their son Nathan had showed off earlier in the day. Seated under an expansive white tent on the Resort’s beachside lawn we toasted to the evening’s clear skies with intensely plummy “Flaunt” 2014 Sparkling Plum. The 2015 Dead End “Skrewd” blend of Riesling, Sauvignon Blanc, and Pinot Gris provided creamy accompaniment to a starting salad of seasonal greens, radishes, and heirloom tomatoes. The locally sourced ingredients introduced the Watermark’s focus on featuring nearby organic farms and Okanagan producers, keeping everything fresh and flavourful. 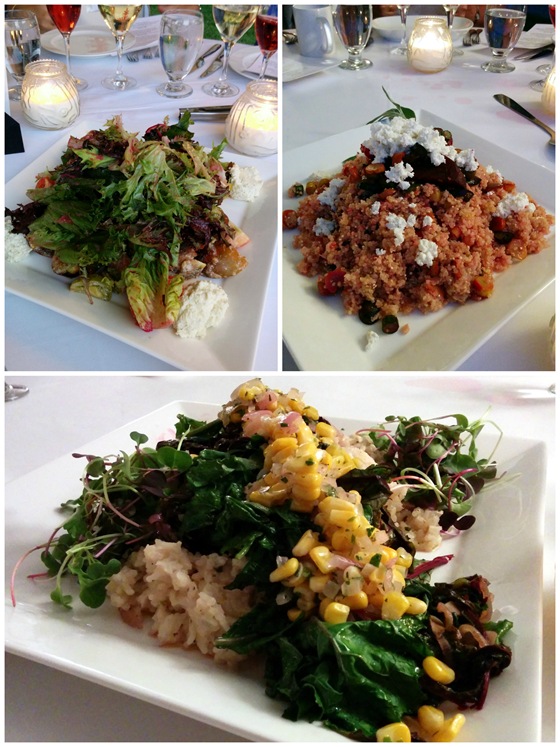 Forbidden Fruit’s 2014 Sauvignon Blanc brought tropical melon fruit to join the next course of Albacore Tuna & Quinoa Salad, piled high with goat cheese and roasted vegetables. Honey Rosemary Glazed Chicken came next with Wild Mushroom Risotto and the Dead End “Catch 22” 2013 Cabernet Franc, expressing enjoyable cassis and licorice. The 2012 red blend “Redemption” was the natural partner for Roasted Beef Striploin with confit potatoes and squash, where it found favourite showing off rich black currant and dark cherry flavours. Generous portions provided little room for dessert but we managed a bite of Okanagan Fruit Crisp with Vanilla Bean Gelato while sipping the luxurious but delicate 2015 “Caught” Apricot Mistelle as the sun set. With the bus about to turn into a pumpkin guests soon made a quick departure back to the tour hotel, where the wisest got a good night’s sleep before another full day to come!