Spending several productive and enjoyable days touring wine country this summer yielded a number of cellar-worthy red wines. In addition to those summarized last month several more commendable bottles demand mention at present. Traversing the Okanagan from north to south provided opportunities to visit several perennial favourites, with no time to spare as stocks seem to deplete earlier than ever these days. 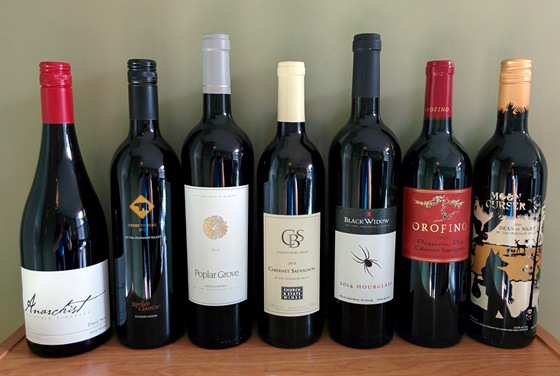 Anarchist Mountain 2014 “Wildfire” Pinot Noir: The small high altitude vineyard of Andrew and Terry (Meyer) Stone provides them with unique terroir at 1,700 feet. The 4.5 acres of twenty-year-old vines include a half acre of Pinot Noir (Clone 115); and given its success much of the existing Chardonnay is being converted as well. For the second consecutive year, this garagiste Pinot has received a Gold medal at the National Wine Awards, with judges heavily praising the “intense, juicy energy” from “pure, well-cultivated grapes that were allowed to express themselves naturally.” Given the small production at present (75 cases) I swallowed the steep 50% markup to avoid missing the boat on this gem. Firefly Fine Wines & Ales $52

Blasted Church 2013 Cross To Bear: In the limited number of previous vintages this wine has been produced it has blended Malbec and Syrah, but the newest vintage brought Petit Verdot into the mix. Just 20% Malbec now unites with 40% Petit Verdot and 40% Syrah, successfully it would seem given the wine’s Gold medal at the Nationals. Judges felt it “powerful yet elegant,” and a rare example of “when unusual blends come together…this wine really nails it.” However, like all the reserve wines in Blasted Church’s “Revered Series”, Cross To Bear is a rarity, with only 120 cases produced and very little left at the winery after a busy summer. Winery Direct $32

Poplar Grove 2013 Benchmark: This interesting red blend has only been made in a couple of previous vintages as a treat for Wine Club members. Collecting my own summer package in person provided a chance to indulge from the remaining stocks of 229 cases divvied up quickly this summer. The blend differs from the more traditional Cabernet-heavy styling of the flagship Legacy blend, with 60% Merlot, 30% Malbec, and 10% Cabernet Franc – all handpicked in exclusively Naramata Bench vineyards. Separate fermentation and fifteen months French oak aging (25% new) was followed by three additional months in barrel after blending; before Poplar Grove’s now traditional 18 month bottle aging process. Winery Direct $35

Church & State 2013 Coyote Bowl Cabernet Sauvignon: Tasting this wine at the Coyote Bowl tasting bar on the Black Sage Bench yielded an impressive rich and toasty palate with solid aging potential. Similar characteristics were echoed by WineAlign judge Rhys Pender during the Nationals judging. (A slew of respectable medals have joined the Nationals Silver, including Bronze at Decanter, Silver in San Francisco, and one of only two Gold at the All Canadians Wine Championships.) The late October harvest from the winery’s Sun Ridge Vineyard in Osoyoos yielded 275 cases after aging in one third new French oak, and few likely remain as the 2014 itches for release. Winery Direct $35

Black Widow 2014 Hourglass: Although Dick Lancaster has been crafting delicious wines on the Naramata Bench for a decade he made a particular mark this year, being awarded the most medals (ten of them) among BC wineries at the All Canadians. Honours included Best of Category in Bordeaux Red Blends for this signature red, a relatively straightforward combination of 70% Merlot and 30% Cabernet Sauvignon – 190 cases from exclusively Naramata Bench fruit. Despite the wine’s youth, it clearly gained much from 21 months in mostly new French oak; I’m looking forward to some time in bottle as well. Impressively, three barrels of Cabernet Sauvignon reserved and bottled as the winery’s first single varietal of the type also yielded a Best of Category nod at the All Canadians. Winery Direct $42

Orofino 2013 Passion Pit Cabernet Sauvignon: One of two vineyard-specific varietal Cabernet from Orofino is sourced from the nearby Passion Pit, beside a local lover’s lane/former gravel pit. Prior to (unfiltered) bottling last August the wine spent twenty months in new and one-year-old oak barrels (French and American). As a new release it has yet to be widely reviewed, but should continue the trend of fully ripe, powerful Cabernet Sauvignon Orofino has been providing at highly competitive prices. Witness the accolades afforded the 2012 vintage by the likes of John Schreiner (“A tour de force,” 92 points) and Anthony Gismondi (“Cabernet with a capital C,” 88 points); the high quality 2013 should be a worthy follow-up. Winery Direct $29

Moon Curser 2013 Dead of Night: This bottle came as a bit of surprise to me in my latest Moon Curser Wine Club shipment: seeing as the 2014 vintage was just released I had mistakenly assumed I already owned the 2013. Although diminished stocks approach sold out status at present the 2013 scooped a pair of Canadian gold medals this summer at the All Canadian Wine Championships and the National Wine Awards. Nationals judges Michael Godel and Remy Charest both felt 92 points worthy for this “blend that really rocks: substantial, with great tannins, appetizing, energetic and fresh.” Selecting the best barrels (35% new French) of Syrah and Tannat for Moon Curser’s flagship red left winemaker and owner Chris Tolley with just 198 cases to bottle in March of 2015. It’s no surprise little remains as the 2014 vintage comes on deck – good thing the Club offers library vintages! Winery Direct $43