Spending nearly a week touring the Okanagan and Similkameen Valleys with several friends mid-month offered me a chance to both pick up a couple wine club orders in person, and nab several winery exclusive rarities. In addition to those award-winning wines previously mentioned, I brought home many unique and small lot additions to my collection from some local favourites. Notwithstanding the superb selection available in retail wine & liquor stores and VQA shops, these wines make the case for personal visits to find the greatest handcrafted specialties. 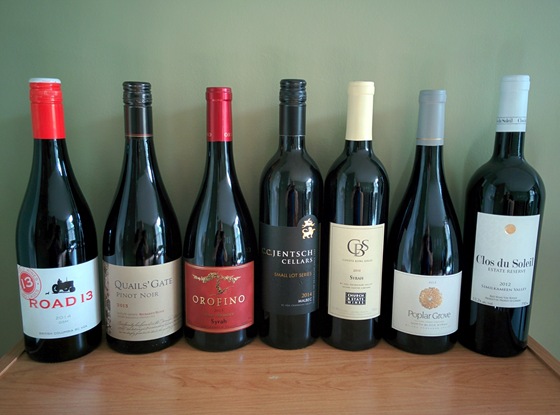 Road 13 2014 GSM: Touring the Golden Mile Bench necessitated a stop at one of the best in the business, where I picked up my latest Club 13 order and relished the newest assortment of Rhone-inspired reds and whites. In addition to varietal Viognier, Marsanne, and Roussanne, my order contained the juicy, meaty 2014 Syrah Malbec and the newest jammy GSM: 55% Grenache, 35% Syrah, 7% Mourvedre (and 2% Viognier). The vast majority of the grapes came from the Similkameen Valley’s Blind Creek Vineyard, with 7.5% from the estate Road 9 vineyard on the Black Sage Bench. Alongside the Platinum medal Syrah Mourvedre, both the Syrah Malbec and GSM were awarded Silver medals at this summer’s National Wine Awards. WineAlign judges praised the generosity and plush texture of this BC rarity, of which only 160 cases were produced. Winery Direct $39

Quails’ Gate 2013 Richard’s Block Pinot Noir: The West Kelowna winery’s 25th anniversary releases of 2014 were so successful and coveted that the series honouring Stewart family founders was extended. In the case of Pinot Noir this led to a second release of a mere 88 cases from the warm 2013 vintage. An exclusive block from the prestigious Upper Boucherie Road vineyard provided fruit for new Winemaker Nikki Callaway to craft an Old World-styled “sleeping giant,” in the words of Anthony Gismondi. His 90-point review suggests wisdom in cellaring for a decade, echoing the winery’s confidence of a 2028 expiry date! My own opportunity to taste this scarce treasure presented me with a richer, fuller-bodied profile than the renowned Stewart Family Reserve Pinot Noir, providing enthusiasm for its potential development. Winery Direct $56

Orofino 2015 Wild Ferment Syrah: The second year of John Weber’s Syrah experiment is another success: ripe grapes from the Scout Vineyard were wild fermented and then aged for five months in a locally-made concrete cistern. The adventurous small batch thus yielded a mere 90 cases, and provides an illuminating look at pure, minimal intervention Syrah in a “youthful fruit bomb” as described by John Schreiner. A taste at the winery presented intense and juicy marinated black cherries, with quintessential Similkameen stone and herbs. A recent Silver medal at the National Wine Awards was accompanied by 92-point praise from head judge David Lawrason, who admired the savoury fruitfulness and “fine sense of balance.” In my opinion multiple bottles are necessary – for both current enjoyment and cellaring study. Winery Direct $29

C.C. Jentsch 2014 Small Lot Malbec: Last year saw a rare varietal Malbec released after Winemaker Amber Pratt reserved two barrels from seven earmarked for the Golden Mile winery’s red blend “The Chase”. A Silver medal at the 2015 National Wine Awards suggested the concept was on the right track, and this year the All Canadian Wine Championships bestowed Best of Category on the second vintage, from which an increased volume of 84 cases were released. Although growing in prevalence, local varietal Malbec is still uncommon, so it’s a treat to encounter a delicious, finely crafted example. Treve Ring was impressed with the perfumed spices and full, ripe fruit while crafting her 90-point review for Gismondi-on-Wine, and I was similarly taken while tasting it at the winery, cementing my purchase decision. Winery Direct $57

Church & State 2013 Second Chapter Syrah: Several months after releasing the newest fan-favourite Coyote Bowl Syrah Church & State has treated us to an unexpected second wine in the reserve series. Both the namesake Coyote Bowl Vineyard and the newly debuted Second Chapter Vineyard can be found on the Black Sage Bench, but the difference in expression from gravel versus sandy soil made the case against blending the two distinctive lots. Second Chapter is the jammier of the two wines, with a silky texture of vanilla and rich dark cherry character on the long lingering finish. Only 600 cases are available after aging in a mix of French, American, Russian, and Hungarian oak barrels. This Gold medal-winning classically-expressed “stunner” helped propel Church & State into BC’s Top 10 at the National Wine Awards (again). Winery Direct $40

Poplar Grove 2013 North Block Syrah: The large estate vineyard in Osoyoos provides many of the red grapes used at Poplar Grove’s Penticton winery, as well as providing opportunities for small lot selections benefiting the Wine Club. While the winery’s regular Syrah is superb, in 2013 fruit of particular depth and richness from the vineyard’s North Block was specially selected for an exclusive batch. Harvested on a single day mid-October, it was double hand-sorted before fermentation and aging in a mix of new, one-year-old, and two-year-old French oak barrels for eighteen months. Like all of Poplar Grove’s red wines, generous bottle aging (15 months) was ensured before release this summer, when just 100 cases were made available to Club members. Winery Direct $40

Clos du Soleil 2012 Estate Reserve: The Keremeos winery’s initial “Winemaker’s Reserve” in 2010 has become this small lot production sourced exclusively from the meticulously tended ten acre biodynamic estate vineyard. The second year it was produced, in 2012, the renamed Estate Reserve included four French oak barrels comprising 53% Cabernet Sauvignon, 27% Merlot, 13% Cabernet Franc, 6% Petit Verdot, and 1% Malbec. Visiting the winery provided a rare opportunity to sample this gem, at which time I was dazzled by a rich nose that conjured bacon and maple syrup woven within the elegant floral and berry fruit aromas. The fine and ripe tannins make it delicious at present, with hugely impressive potential echoed by Anthony Gismondi in his recent 93-point review. At this point only a handful of cases remain, with the highly anticipated 2013 ready on deck. Winery Direct $60