The mid-summer season is an exciting time for British Columbia’s winery industry, witnessing the confluence of three major Canadian competitions. A one month period from June to July begins with results from the All Canadian Wine Championships, followed closely by our provincial Lieutenant Governor’s Awards, and only weeks later WineAlign’s National Wine Awards of Canada are announced. Competition outcomes shouldn’t necessarily drive one’s personal preferences, but they do offer valuable suggestions for expanding one’s palate, experiences, and cellar selection. A recent trip through the Okanagan Valley and a few strategic local purchases provided the opportunity to do just that. 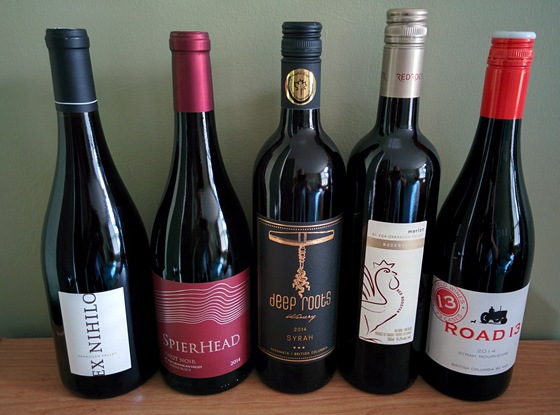 Ex Nihilo 2014 Pinot Noir: Twelve of 504 wines submitted to the Lieutenant Governor’s Awards judging received the eventual nod, with Lake Country’s Ex Nihilo bringing home their second Award in a row, after the 2013 Pinot Noir was recognized last year. In both years Ex Nihilo has been honoured with the only Pinot Noir named in the final results. While the publicity will certainly speed up sales a full 1,156 cases were produced, from Lake Country and Vernon grapes aged 9 months in (20% new) French oak. As it turns out I had the chance to taste at least a sibling of this wine last December when a friend shared the winery’s “Black Star Vineyards” branded 2014 Pinot Noir. Anthony Gismondi tasted the original version last month and remarked upon similar earthy red berry character in his 88 point review. Swirl VQA Store $45

SpierHead 2014 GFV Saddle Block Pinot Noir: I had acquired this fine Kelowna winery’s 2014 “Cuvée” Pinot Noir back in February, but it was only one of the two SpierHead Pinots awarded Platinum Medals from the National Wine Awards. Of over 1,500 entries the top 1% are awarded Platinum, and bringing home two of those coveted sixteen medals is most certainly something to crow about. In addition to the praise for the Cuvée’s ripe complexity the WineAlign judges heaped compliments on this small lot (211 cases) from the home “Gentleman Farmer Vineyard” in south-east Kelowna, e.g., “One of the finest of the vintage” in the eyes of head judge David Lawrason. Three Dijon clones were aged ten months in French oak to yield what the winery feels is a “soft, velvety” texture thanks to the warm growing season. Firefly Fine Wines & Ales $41

Deep Roots 2014 Syrah: Despite having opened their winery only two years ago the Hardman family has been farming their Naramata property for nearly a century, with grapes being the focus starting twenty years ago. A Platinum medal at the National Wine Awards last year for the 2014 Gamay made a statement, and now this year the 2014 Syrah has been named Best Red Wine of the Year at the All Canadian Wine Championships. No doubt proprietors Bryan & Deb Hardman have been doing their utmost to stretch the small supply of just 270 cases, but very little remains even so. When awarding the Syrah a Silver medal at the National Wine Awards, judges David Lawrason and John Szabo were sure to compliment the wine’s approachability, intensity, and complexity: “This has an extra gear of flavour, and very good length too.” Winery Direct $34

Red Rooster 2012 Reserve Merlot: A well-priced classic from Red Rooster’s upper tier, the Reserve Merlot was honoured with a Lieutenant Governor’s Award just as supplies were starting to run low. This screw-capped bottle is in fact the oldest wine Awarded, as the only 2012 vintage amongst the dozen. With only 387 cases produced very little remains at the winery – from which it is sold exclusively – especially considering it’s been collecting reviews for nearly two years already. Back in the summer of 2014 WineAlign reviewer David Lawrason remarked upon the full-bodied richness, with a caution for the nearly overripe fruit. The following spring reviewer Michael Godel was more generous in suggesting “one shouldn't miss this near-decadent beauty even if the style agitates.” Winery Direct $27

Road 13 2014 Syrah Mourvedre: The pivot to Rhone varieties at Road 13 provided for this rare blend beginning in 2011, from the winery’s “Road 9 Vineyard” on the lower Black Sage Bench. Following up a Gold medal at the Nationals last year the newest vintage scooped yet another Platinum for the highly respected winery. Receiving a taste while visiting the winery my companions and I were quite taken by the dark, inky colouring from which wafted aromas of cherry and blueberry compote. The plush texture embraced big juicy plums and cracked pepper amongst a bed of further smoky fruit compote. Sadly, this year’s release marks the smallest production quantity yet, at a mere three barrels (approximately 73 cases), not even half that of last year. Winery Direct $45 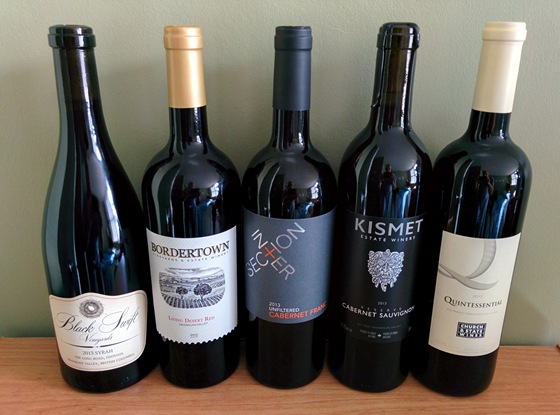 The Hatch “Black Swift” 2013 Long Road Syrah: Here’s yet another hugely challenging rarity to seek out, having sold out at the winery before the wine’s Platinum medal from the Nationals was announced. The premier tier vineyard-specific Black Swift series are micro lots that launched with the inaugural “flight” from the 2013 vintage, in which just 75 cases of this Osoyoos Syrah were released. I doubt it can be found in more than a handful of stores, and was lucky enough that the attractive – and hefty – bottle caught my eye only recently. WineAlign’s judges praised the deliciously complex palate and terrific length, worthy of a few years in the cellar to leverage the luscious structure. Coal Harbour Liquor Store $62

Bordertown 2013 Living Desert Red: Consulting Winemaker Jason Parkes, currently nesting at The Hatch, increased his considerable credibility by producing this Lieutenant Governor’s Award-winning blend of 75% Cabernet Franc and 25% Merlot from Proprietor Mohan Gill’s Osoyoos vineyards. With nearly two hundred acres of orchards and vineyards throughout the Okanagan Mohan sold grapes widely until beginning the wise and now seemingly common process of adding further value via his own winery, starting in the 2013 vintage. Although 586 cases of Living Desert were produced, supplies are running low given the newfound publicity, plus the appreciation of tasting room visitors for the power and lingering finish John Schreiner praised last year. Swirl VQA Store $28

Intersection 2013 Cabernet Franc: At an approachable price point, the only varietal Cabernet Franc recognized this year came from Oliver’s Intersection Winery, recipient of one of four first-time awards. Although not yet included on the winery’s under-revision website, approximately 300 cases of Cabernet Franc were produced after spending a year in French and American oak, and some remain available for sale while supplies last. Like most of Intersection’s red wines, the Franc is unfiltered, said to be “clarified by time and gravity.” It is likely the 2013 follows the “big and brambly” profile of the 2012 vintage John Schreiner previously reviewed, and will benefit from further bottle aging to gain in complexity. Swirl VQA Store $28

Kismet 2013 Reserve Cabernet Sauvignon: Like fellow Indian immigrant Mohan Gill brothers Sukhi and Balwinder Dhaliwal began with (now extensive) vineyard holdings and grape sales before launching their own winery in 2013. Kismet’s 2013 Syrah (and 2014 Riesling Icewine) received a Platinum medal at last autumn’s BC Wine Awards, and now their first varietal Cabernet Sauvignon has been awarded a Lieutenant Governor’s Award. Fellow wine blogger Luke Whittall pointed out the noteworthy fact that Kismet’s Cabernet is only the third single-varietal of the type to ever win. With only 95 cases produced and held in bottle until this summer it will likely remain a tasting room exclusive. Winery Direct $40

Church & State 2012 Quintessential: With all the talk of this year’s Lieutenant Governor’s Awards, here’s a winner from 2015, only just released recently (in concert with a Gold medal from the 2016 Nationals). The release just happened to coincide with my visit to the winery, and thank goodness for that as production was shockingly slashed from the regular several hundred to just 100 cases in 2012. A five-variety Bordeaux-styled blend from a mix of southern Okanagan vineyards, Quintessential spent 22 months in French oak, one third new, to yield what WineAlign reviewer Bill Zacharkiw describes as “an absolute beast of a wine” – awaiting emergence from my cellar in the 2020’s. Winery Direct $55