With the holiday shopping (and drinking) season still hanging over our heads few new wine releases are usually forthcoming in the first couple months of the year. I myself have introduced only a handful of new bottles into my cellar since December, hence no January Collectibles entry. A couple choice selections from a trip to Osoyoos over New Year’s with the BC Wine Appreciation Society are included this month, along with some new wines from the same neighbourhood thanks to a recent Wine Club shipment from Moon Curser. 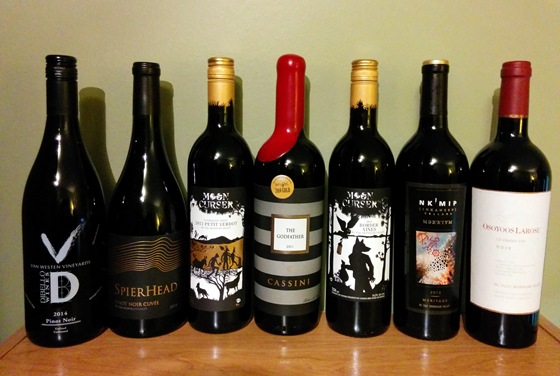 Van Westen 2014 “VD” Pinot Noir: Robert Van Westen and his Pinot Noir partner Tom DiBello maintain a good sense of humour, evident not only by the cheeky name of their collaboration, but in their decision to release it annually on Valentine’s Day. This year marks the fourth vintage for the small lot specialty very popular amongst those in the know on Rob’s mailing list. The Naramata vineyard yields a rather intense wine due to additional hang time necessitated by the north-facing tilt: Rob mentions baking spice, savoury meatiness, and dark chocolate characteristics to accompany the fruit flavours. A relatively bountiful 135 cases represents the largest production yet, and a welcome increase from last year’s miniscule two barrels (51 cases). Winery Direct $40

SpierHead 2014 Pinot Noir Cuvée: This young Kelowna winery has gotten into Pinot Noir in a big way, with four different new releases making their way to market. Always savvy marketers, SpierHead sent review samples broadly to the local community, ensuring strong publicity for wines they had every reason about which to be confident. The flagship Cuvée represents the best barrels, blended to produce 274 cases from five clones across the winery’s vineyards, and then aged for ten months in French oak. It has already garnered praise for being “rich in complexity and texture,” in addition to “concentrated and seductive,” with much potential to “relax and grow in the bottle over the next two to three years.”  Sutton Place Wine Merchant $41

Moon Curser 2013 Petit Verdot: This adventurous Osoyoos winery has been producing varietal Petit Verdot for a few years, one of only a small handful of local ventures doing so. It’s always a small lot release, this time only 246 cases from the Osoyoos East Bench, and part of the reserve “Contraband Series”. Interestingly, only one third of the wine was exposed to any expressive oak (new French in this case), with the remainder fermented in steel and then aged in neutral barrels for a year. The early harvest of mature grapes (24.5 Brix by October 16th) and restraint in the cellar should yield fruit forward characteristics, with the winery suggesting it is more “supple and generous” than previous vintages. Winery Direct $32

Cassini 2011 The Godfather: After a few years in operation and growing success, Proprietor Adrian Cassini introduced an icon red blend in the form of “The Godfather”. The new 2011 is only the second vintage, reflecting the highly respectable increased emphasis on bottle aging Adrian has put in place recently. In the case of The Godfather, time in bottle will most certainly have helped settle it after 24 months in 100% new French oak! The wine is a blend of the best barrels and varieties from the cellar, and doesn’t follow a predictable formula, this year bringing together Cabernet Sauvignon (86%) and Cabernet Franc (14%) to yield a mere 150 cases. Seeing as The Godfather is rarely seen outside the winery tasting room, I took advantage of the New Year’s trip to pick up this rarity. Winery Direct $70

Moon Curser 2013 Border Vines: Another brand new release included in my latest club shipment, the Border Vines is Moon Curser’s prevalent (1,710 cases) red blend. In past years the inclusion of Carménère has rounded out the six-grape blend, complementing the more traditional Cabernets, Merlot, Malbec, and Petit Verdot – putting it a step above others. However, it seems Cabernet Franc didn’t fit the bill for 2013, as it is notably absent this year, making for 32% Merlot, 25% Cabernet Sauvignon, 21% Malbec, 18% Petit Verdot, and 4% Carménère. It’s certainly surprising to see so much Petit Verdot, especially from a winery that also bottles a straight varietal of the grape; Chris Tolley always keeps things interesting! I added the new vintage to my rotating vertical of this little gem, pushing the 2009 to the top of the queue for upcoming consumption; fortunately it should be well preserved under screwcap. Winery Direct $27

Nk’Mip 2013 Mer’r’iym Meritage: While the 2012 vintage of Nk’Mip’s relatively new icon red blend is still listed online (and sold out to boot), the 2013 was found in generous quantities at the Osoyoos tasting room during my visit over New Year’s. The big bold red from some of the Okanagan’s southernmost vineyards is built to age elegantly, and now that I have the 2013 I can finally open my inaugural 2008 to make room in the rotating vertical I keep. Surprisingly, Nk’Mip elected on a blend dominated by three quarters Merlot, despite the beneficial vintage conditions that would imply Cabernet Sauvignon, in this case bringing up the rear at only 12%, with 7% Malbec, and 5% Cabernet Franc to balance the profile. Regardless, it should age just fine (given suggestions regarding past vintages) as I await the 2018 vintage release that bumps this one into consumption status. Winery Direct $50

Osoyoos Larose 2012 Le Grand Vin: Despite just picking up the 2011 vintage in December, the new 2012 has already been spotted on store shelves. As John Schreiner pointed out at the end of last year, reduced production quantities from 2010 and 2011 meant the 2012 was released early despite the potential benefits of bottle aging. This newest release comes just as news has emerged that new Winemaker Mathieu Mercier is himself being replaced by Jean-Marc Enixon, in a friendly staff rotation by estate owner Groupe Taillan. Mathieu would have aged and blended the 2012 after Pascal Madevon departed in early 2013. He settled on a final configuration of 50% Merlot, 24% Cabernet Sauvignon, 13% Petit Verdot, 9% Cabernet Franc, and 4% Malbec that charmed Schreiner into a 94-point score (and prompted Anthony Gismondi to declare it “one of the best young Osoyoos Larose we have tasted”). Swirl VQA Store $45

Thank God! I thought you quit. I had your site bookmarked and clicked on it every other day and for the past year, the last entry was December 2014.
Obviously there was some glitch, as I discovered via a google search that you have been entering new posts. I deleted the old link and look forward to reading up on the past year of posts I missed! Thanks for the good work.