February Wine Club: Not That Colbert

My favourite aspect of our monthly wine club is the fact that it encourages people to experiment in the kitchen to find the best food pairings. This month one of our regular couples was forced to cancel on short notice, but some highly enthusiastic pinch hitters joined us in their absence. Maybe it was the presence of new members to impress, or maybe inspiration was in particular abundance this month, but everyone brought their A-game! There were plenty of new gourmet dishes and exciting wines to share. 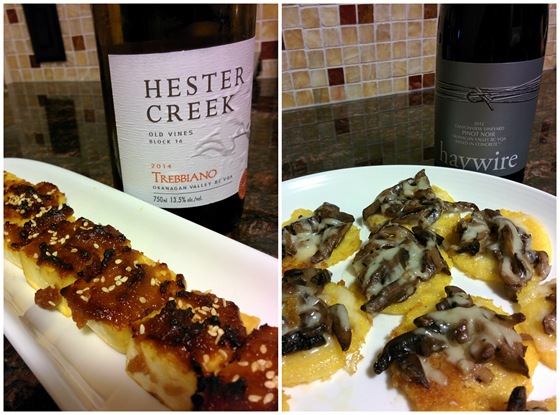 As we awaited the arrival of all eight diners we noshed on warm hors d’oeuvres from the oven, paired with a wine duo sure to please any palate. The first course chefs had brought us Miso-glazed Baked Tofu with Sesame Seeds, and Fried Polenta Rounds with Gruyere & Wild Mushrooms. We had the joy of first sipping from a wine I have foolishly not enjoyed in some time – Hester Creek’s unique varietal Trebbiano. The forty-year-old vines on the Golden Mile Bench produced 1,000 cases in 2014 of a wine that stands alone in Canada. The lip-smacking refreshment of last spring’s release was still very much a joy to drink at the same time the 2015 is likely being bottled. The perfumed nose of dried flowers and tropical fruits opened up into a palate of subtle fresh stone fruit and candied pineapple. I was reminded that keeping a few bottles on hand as a summer staple this year will be wise.

While the crisp Trebbiano helped cut through the rich polenta rounds it was Haywire’s 2012 Canyonview Pinot Noir that was expected to coordinate best with the mushrooms and cheese. This follow-up to the Lt. Governor’s Award-winning 2011 vintage comes from Summerland grapes that spent time in used oak barrels and concrete eggs. It yielded generous varietal character on the earthy nose, and the pleasingly smooth palate presented cranberry and cherry flavours that reminded some guests of tasty fruit gummies. The slightly smoky character actually worked well with the baked tofu, which unexpectedly encouraged the wine to express darker tropical fruit flavours. 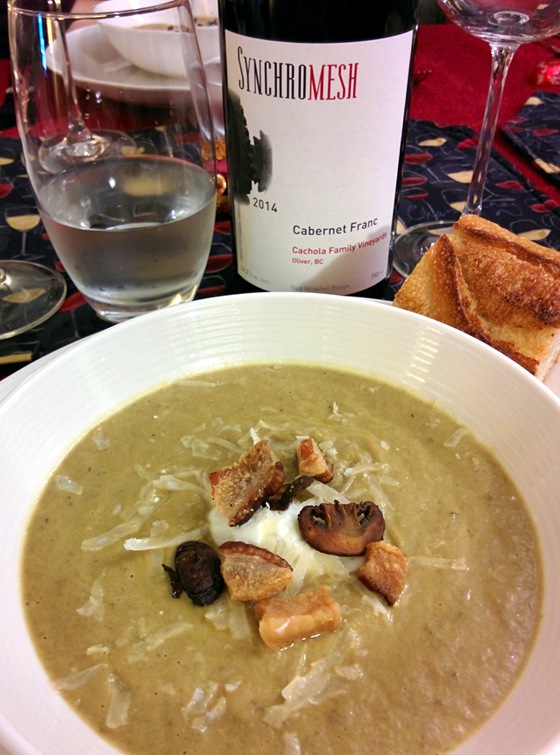 With everyone gathered around the table, our appetizer course was presented, courtesy of one particularly intrepid guest who carried a full crock pot across town in a taxi! The devoted chef had brought us an incredibly flavourful eggplant soup modelled after the “Aubergine Dream” served at a friend’s Souppe Shoppe in Toronto. Roasted eggplant and mushrooms were topped with double-smoked bacon bits and mushroom chips, paired with new Synchromesh 2014 Cabernet Franc. Okanagan Falls Winemaker Alan Dickinson worked with the Cachola family to nurture a small vineyard outside Oliver, from which this bright and punchy wine came to us. The savoury nose of herbs and leather worked very well alongside the soup, and the palate proved surprisingly smooth for such a young wine, with a fruit-forward influence and tart cherry flavours. 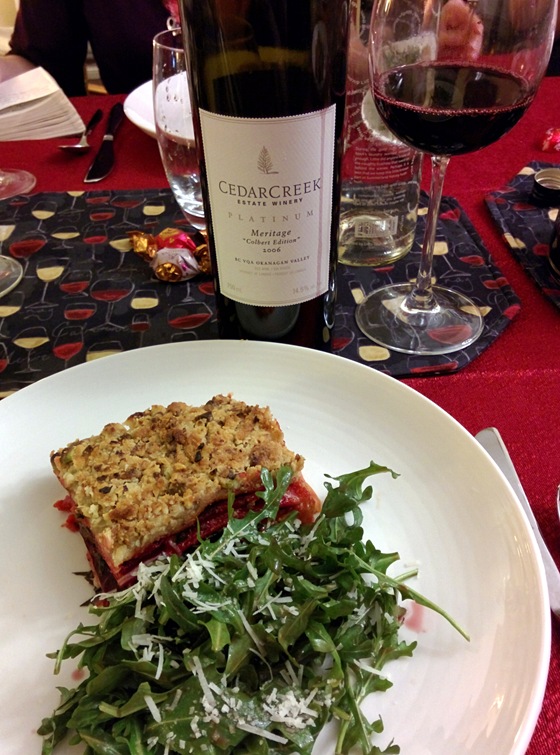 For the entree course I was inspired yet again by BC Liquor Stores’ TASTE Magazine, having recalled a creative take on traditional lasagna spotted in last Fall’s issue. The Beet & Cheddar Lasagna turned out very well, with layers of beets, chard, whole wheat pasta, and a tangy aged cheddar béchamel sauce topped with a crispy pistachio crumble. With such a hearty, earthy dish on offer I turned to a big, aged red with expected intensity to match. The CedarCreek 2006 Platinum Meritage “Colbert Edition” was a unique small lot (144 cases) produced when the winery acquired four barrels of rare Sylvain French oak from a 350-year-old tree. Supposedly the trees in the forest of Bertrange were planted under the supervision of Louis the Fourteenth’s Finance Minister Jean-Baptiste Colbert. The wine is not an homage to talented comedian and television host Stephen Colbert (who is in fact of Irish ancestry).

Decanted at the beginning of the meal, the Meritage was ready to reveal the results of nine years aging on the blend of Merlot (40%), Cabernet Sauvignon (31%), Malbec (18%), Cabernet Franc (9%) and Petit Verdot (2%) – which spent 21 months in those Colbert barrels. We smelled toasted vanilla, milk chocolate, and the meaty notes of “really good steak,” plus a touch of residual volatile acidity. The palate was velvety smooth with a lively tart finish, and showing intense flavours of blueberry compote along with some savoury olives and a hint of the aforementioned steak’s raw bloodiness. Not including the contents of some vertical collections, the Colbert Meritage was one of the oldest BC wines in my collection, and it was a joy to share it with good friends over great food. 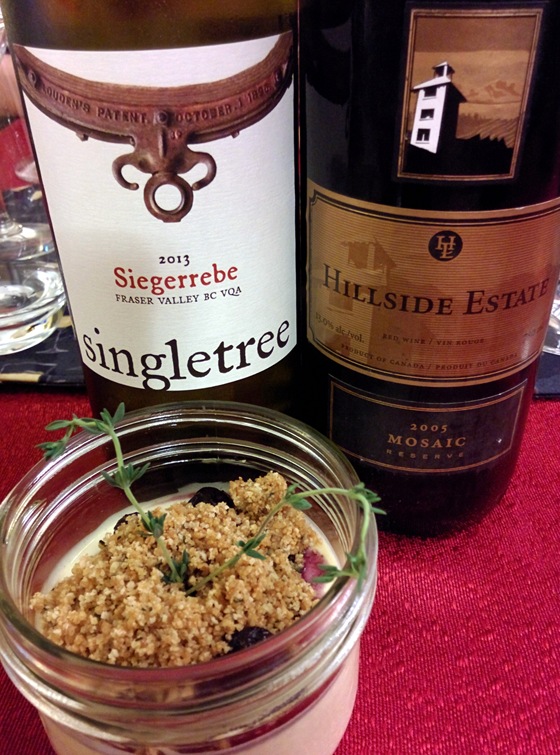 Full of beets we settled back to see what the dessert team had brought us, hiding beneath a tea towel before the final reveal. Individual mason jar cheesecakes yielded applause, particularly when the details were presented: the savoury Blue Cheese Cheesecakes were topped with Blueberry Port Compote and Thyme Honey Graham Cracker Crumble. The chefs were apparently feeling as nostalgic as I was, given the 2005 Hillside Mosaic they were willing to open. In addition, their recent day-trip to Abbotsford had included a visit to growing new winery Singletree, from where a bottle of 2013 Fraser Valley Siegerrebe was obtained. The Siegerrebe’s sweetly scented nose of honey and lychee fruit was a superb pairing for the cheesecake, while the Mosaic offered darker aged character. Suggestions of tomatoes and olives prompted “pizza” as the aromatic descriptor of choice, while “funky” maple-caramelized vegetables swirled about the spicy palate.

Satisfaction and mutual compliments were widespread as we concluded the evening; it was a particularly innovative meal with some rare wines and inspired pairings as well. We enjoyed reds from an expansive range of ten vintages, let alone the fresh and exciting whites, giving us all many wonderful memories and even further inspiration for future gatherings.