The end of the calendar year is usually fairly slow in terms of wine releases, as those in the industry take well-deserved vacations, or at least bide their time awaiting the icewine harvest. That being said, I was quite happy to take delivery this month of my biannual wine club shipment from Painted Rock, and spend some time picking up a handful of other singular sips. Some bottles were expressly intended to continue growing vertical collections, while others represented lucky acquisitions of hard-to-come-by rarities. In amongst the joy of gift shopping for family and friends a few treats for my future self didn’t seem over the top. 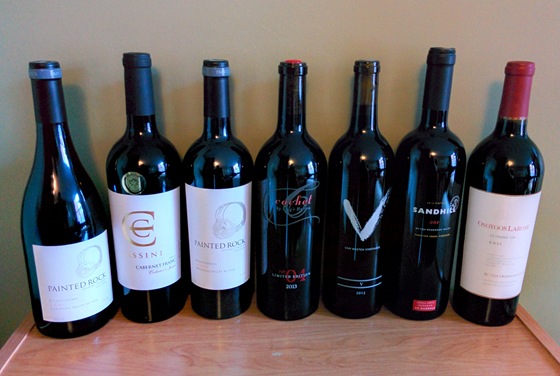 Painted Rock 2013 Syrah: Ever since the first vintage in 2007 this has been one of my favourite BC Syrah. Proprietor John Skinner likes to recount his hesitation in planting the variety until he was strongly encouraged by legendary wine writer John Schreiner. The grape sings from Skinner’s sun-soaked Skaha Bench vineyard, and the latest release of 1,622 cases should easily continue the tradition of excellence. A steady decline in the use of new oak at Painted Rock has left only 30% in such barrels (for 18 months), 80% of them French. Early reviews have praised the perfumed aroma and white peppered, dark berry flavours: Anthony Gismondi recently remarked on the beneficial aromatics of “mid-valley” Syrah such as this one in his 90-point review. Winery Direct $40

Cassini 2012 Cabernet Franc: Receiving a Lieutenant Governor’s Award in June for this dynamic Cabernet Franc must have tempted Adrian Cassini with immediate sales potential, yet it only recently came on the market. Of course, a mere 222 cases have disappeared out the door with rapidity, but a select number of retail locations received small allotments. Technically the wine contains 5% Merlot as well, aged alongside the Franc for two full years in new oak (80% French). My own recent tasting experiences agree with the many exuberant reviews, including that from Lt. Governor’s Award Judge John Schreiner, who remarked on the exquisite aroma. Icon Wines’ Liam Carrier found it to be “truly gorgeous” upon tasting in late October; well worthy of 92+ points plus a long and prosperous life in the cellar. Swirl VQA Store $35

Painted Rock 2013 Merlot: Painted Rock only produces 5,000 cases of wine per year, with the varietal Merlot serving alongside Syrah as the winery’s workhorse – combined they comprise nearly two thirds of production. From the 2013 vintage a full 1,746 cases of Merlot are soon to be released, after the same oak aging regime as the Syrah (18 months, 30% new, 80% French). Past experience has shown the Merlot to be a dark horse, taking some time to mature before showing off highly memorable character – this one in particular is a superb cellar candidate. John Schreiner suggested “five or more years” until it will blossom, with enough confidence in the brooding, concentrated texture for 92 points at present. Winery Direct $40

Stag’s Hollow 2013 Cachet No. 04: After a two year hiatus the top-tier Cachet series is joined by a fourth wine with the recent, long-awaited release of No. 04, a creative blend of 57% Petit Verdot, 37% Merlot, and 6% Cabernet Sauvignon. Exclusively winery direct at present, the price somewhat reflects desire to slowly meter out limited stock – just 117 cases were produced. That’s not to say this continuation of the series isn’t worth every penny, comparable in the eyes of Winemaker Dwight Sick to other local icon reds in the same price range. The predecessor 2010 Cachet No. 03 brought the winery a Lieutenant Governor’s Award in 2013, and No. 04 received a Gold medal at this summer’s National Wine Awards. Bottles are still hand-numbered, with mine coming in at #1339 of 1405; let’s hope Dwight kept #1 for himself! Winery Direct $69

Van Westen 2012 V: Adding the newest bottle of Rob Van Westen’s Bordeaux blend gives me a four-year vertical since the first vintage in 2009. I may open that aged example late next year when the 2013 is released, but there is no hurry as Rob’s wines are notoriously long-lived (he was mentored by Bill Eggert after all). Unlike Rob’s long-running two thirds Merlot and one third Cabernet Franc blend “Voluptuous”, the V contains five Bordeaux varieties, in this case 45% Merlot, 26% Cabernet Franc, 17% Malbec, 7% Cabernet Sauvignon, and 5% Petit Verdot. The small production model is maintained however, and only 346 cases were produced, despite the solid growing season. The high quality harvest that year has left the wine with heady aromas and density of flavour, sufficient for a Silver medal at the National Wine Awards. Winery Direct $35

Sandhill 2012 Small Lots One: The Small Lots series provides a playground for Winemaker Howard Soon to drill down even further into Sandhill’s single vineyard philosophy. The “One” typically comes from the 7-acre Black Sage Bench Phantom Creek Vineyard, from which Howard obtained twenty (new American oak) barrels of an eclectic blend of 66% Cabernet Sauvignon (three clones), 11% Malbec, 9% Petit Verdot, 9% Syrah, 3.5% Cabernet Franc, and 1.5% Merlot. The wine was originally released in February, but took longer to show up on store shelves outside the Kelowna tasting room; that being said it’s now sold out there while retail stock remains available. The “One” represents another rotating vertical collection for which I now have 2009-2012 awaiting future consumption. With four years to go until the 2016 bumps this vintage from the cellar I can provide it with sufficient time to “settle down” as Anthony Gismondi suggests. Swirl VQA Store $40

Osoyoos Larose 2011 Le Grand Vin: The newest icon red from the equally iconic Osoyoos Larose brand is the second last vintage in which original, long-serving Winemaker Pascal Madevon had a hand. After his departure (for Culmina) in January of 2013 new Winemaker Mathieu Mercer would have completed blending trials that summer to yield the final combination of 48% Merlot, 33% Cabernet Sauvignon, 10% Petit Verdot, 6% Cabernet Franc, and 3% Malbec. The winery indicates that Cabernet Sauvignon is more dominant than in previous vintages, a surprising choice given the notoriously cool vintage conditions in 2011. The typically heavy tannins of Le Grand Vin will require time, and aging until 2021-2023 is suggested by the winery. With pleasing harmony, 2021 is precisely when I hope to add the 2017 vintage to my cellar, necessitating consumption of the 2011. Swirl VQA Store $50