Naramata Bench winery Laughing Stock is best known for their iconic red blend “Portfiolio”. Since founding the winery in 2001 owners David & Cynthia Enns have produced thousands of cases of their flagship wine, and recently celebrated the tenth vintage upon release of the 2012. However, despite the seeming focus on Bordeaux-styled reds (including the well respected second wine “Blind Trust”) the winery has wisely diversified their holdings. The Enns have in fact spent the last several years crafting one of Canada’s best Syrah since acquiring an Osoyoos vineyard in 2007. 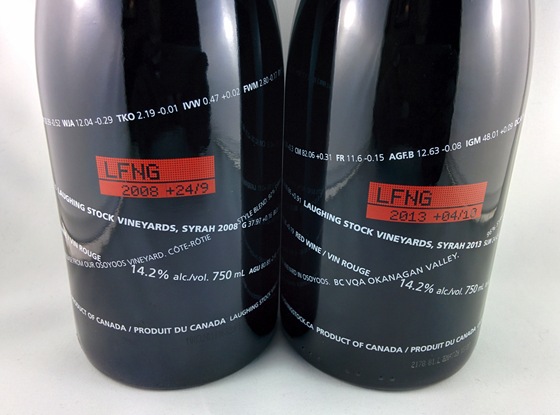 As a member of Laughing Stock’s Preferred Share Wine Club I have been privileged to receive each vintage of Syrah since the first release of 302 cases in 2008. Latter vintages have grown in size to the several hundred cases now produced annually, but still pale in comparison to the 2,000+ cases of Portfolio snapped up each year. Despite the worthy praise for Portfolio, the Syrah has received at least as many accolades, with annual admiration that has included national Platinum and Gold medals, plus a prestigious Lieutenant Governor’s Award for Excellence in BC Wines. Having amassed six vintages from 2008 to 2013 I recently decided to share a vertical tasting of this spectacular Syrah with a small group of family and friends.

The Perfect Hedge Vineyard on the East Bench of Osoyoos Lake was planted in 2005, including nearly three acres of Syrah alongside Cabernet Sauvignon, Merlot, Viognier, and Malbec. By 2008 the vineyard was ready to yield a blend of 92% Syrah and 8% Viognier, released to a growing fan base in the summer of 2010. For the first release the winery went with Stelvin-sealed bottles, which has benefited the wine by this point, as we found it lively and retaining generous fruit beyond some mature savoury olive aromas. Purple fruit flavours on the finish suggested there is still life ahead for those bottles that remain securely sealed and stashed away in the cellars of collectors.

The early years of production served to establish Winemaker David Enns’ preferred technique, with whole cluster/berry Syrah complemented by crushed Viognier (4-8%) to circulate within the steel tanks and oak puncheons used for fermentation. Fourteen to 16 months of aging have become the norm, with 40% new oak most common. In the second year of production the hot and short growing season of 2009 pumped up the alcohol to 14.8%, contributing to the plummy, Porty nose we encountered. Smooth and mature under cork the wine was in fact so rich as to be considered best for after-dinner purposes, with low acidity and sweet, chocolate-cherry flavours serving to raise eyebrows around the table. Even at a young age this wine launched the series of notable medals collected thus far, receiving Gold at the 2011 Canadian Wine Awards.

Another CWA Gold medal arrived the following year, awarded to the 2010 vintage; which also received the Lieutenant Governor’s Award that summer. The relatively cool growing season was overcome with deft viticulture and a late harvest during a timely October heat wave. Despite the necessary fruit thinning production increased to 620 cases, although 18 months of aging was felt necessary, the longest of all six vintages. After three-plus years in bottle we discovered a mouth-watering wine at its peak, with aromas of savoury leather and peppered meat, and a smooth, juicy blackberry palate – an easy favourite of the tasting.

If 2010 was thought to be cool then 2011 was an even ruder surprise – late from beginning to end. While 2010 was harvested October 7th the 2011 vintage of Syrah was harvested at month’s end. Still, 760 cases came of it (despite one block being bled for the winery’s occasional Rosé), and a traditional “cool climate red” was the eventual result. On the nose the expected leather notes were paired with blueberry and sweet oak. While not as silky in texture as some of the other wines in the vertical, the refreshing acidity and cool flavours lent a certain elegance along with age-worthy optimism. The wine continued its golden streak with a medal at the 2013 National Wine Awards, and then went on to receive an esteemed Decanter Regional Trophy.

The 2012 growing season launched what has become a four-year trend of warm, high-quality vintages. Although a large yield must have been tempting, only 643 cases were eventually produced, keeping the focus on quality over quantity. The careful crop management, flawless summer, and maturing vineyard combined to yield one of the fourteen Platinum medals awarded at the 2014 Nationals (including three for BC Syrah). We were struck by the intensity present upon tasting, with dark, luxurious flavours of cherries and licorice under the smoky, spicy nose. The serious character was deemed well worthy of further aging, with the expectation it will continue to improve over time.

Given the requisite 14+ months of aging, plus time to recover from bottling, Laughing Stock typically release their Syrah mid-year, putting us in the middle of the schedule at present. Stocks of the most recent 2013 may thus start to run low soon, despite a relatively bountiful 820 cases released earlier this year. A Gold medal (and great company) at the 2015 Nationals in late summer was practically expected at this point, and obviously well deserved. Sampled first, alongside a spread of flavourful food, it oozed charisma with bountiful aromas of fresh black cherry, licorice, pepper, and bacon. The lip-smacking palate was beautiful paired with dark chocolate, and a popular crowd favourite even by the end of the tasting. 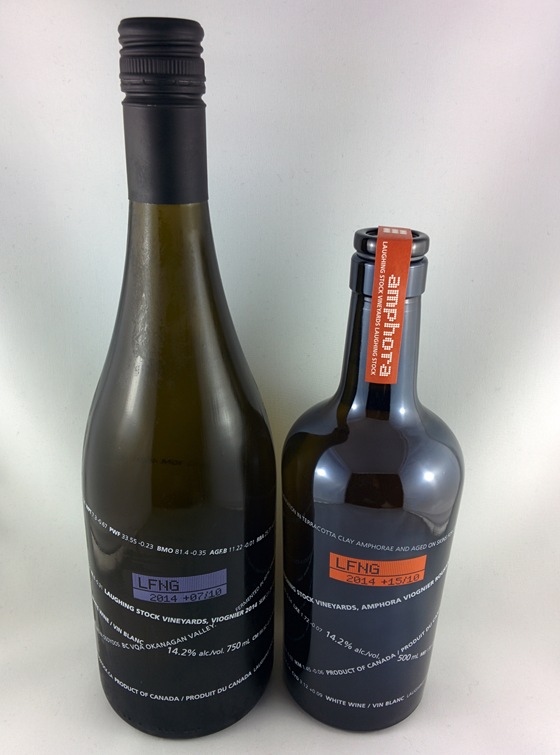 I would be remiss not to mention the ripe and luscious whites we also enjoyed both before and after. Laughing Stock’s Osoyoos vineyard yields generous Viognier as well, with the 2014 providing flavours that span the spectrum of citrus, orchard, and tropical fruit in this ideal Syrah companion. To mark the special occasion I even cracked open the winery’s rare (162 cases) 2014 Amphora Viognier Roussanne, an experimental “hands-off” wine made in tribute to ancient methods. The project saw whole berry Osoyoos Viognier and Black Sage Bench Roussanne naturally fermented together over two and a half months in a pair of Italian clay amphora. The result is intriguing and striking, with rich aromas of apple sauce and peach pie atop a salted caramel palate plus a touch of thought-provoking light oxidation and even mild tannin.

Reflecting on the entire flight of Syrah it was apparent that all had strengths, with near universal satisfaction. It was challenging to rank order all six vintages, but in the end some rose to the top a bit more readily, providing greater enjoyment at present:

My own stocks are now reduced to those vintages from 2011 onward, but that should serve to provide some delicious future opportunities given what was learned. With what should be sublime 2014 and 2015 vintages still in barrel at Laughing Stock, I look forward to much more enjoyment of what has fast become a benchmark Canadian Syrah.