This year the Vancouver International Wine Festival included very few BC-centric events, with just one outside the Festival Tasting Room. Fortunately that one event was of the highest calibre: a ten-year vertical of Laughing Stock’s flagship “Portfolio” Bordeaux-style red blend. The winery has been celebrating their tenth vintage release since the 2012 was introduced last fall, with similar Portfolio Verticals across Canada. Needless to say I was honoured and excited to have received an invitation to attend the sold out Wine Festival Vertical as media. 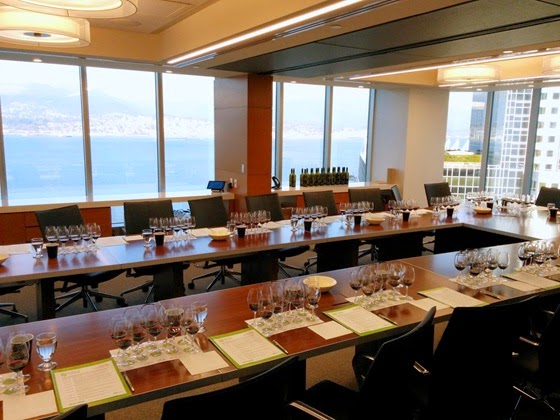 The tasting took place in the newly renovated boardroom of law firm Borden-Ladner-Gervais, and was moderated by local wine and food legend Sid Cross. Laughing Stock owners David & Cynthia Enns were present along with their new Wine Club & Tasting Room Manager Kendall Harris. Stunning views of the Convention Centre buildings and North Shore mountains provided an appropriate backdrop for the Enns’ impressive achievements. The “winery” started in 2001 when David imported one ton of Cabernet Sauvignon grapes from Washington to press in his White Rock garage. Only two years later they had moved production to the Naramata Bench and assembled the first Portfolio blend. In the dozen years since then Laughing Stock has amassed national and international acclaim, with sustainable growth at the same facility built in 2005, always focused on quality over quantity. 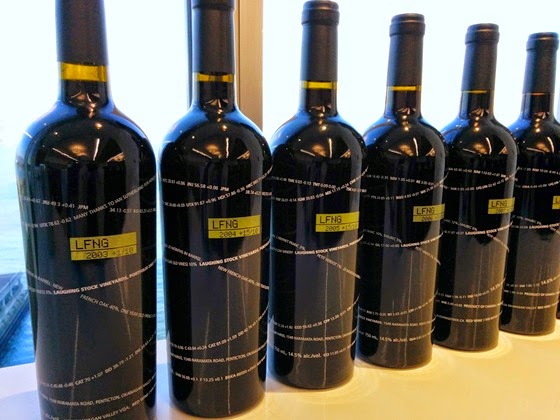 Based on experience from previous similar tastings in Vancouver, Toronto, and Montreal, along with guidance from Sid, the ten samples from 2003-2012 were divided into two flights of five. The 2007, 2006, and then 2005 were actually tasted first, representing the initial years of self-sufficient production from the Enns’ own winery. The 2007 expressed very attractive maturity and complexity on the nose, with baked strawberry and blueberry flavours that still retained fresh acidity; it would ultimately prove my favourite of the flight. Both 2006 and 2005 were more savoury and leathery on the nose, seemingly more tannic than the younger 2007, with stewed fruit flavours and hints of milk chocolate and olives, respectively. 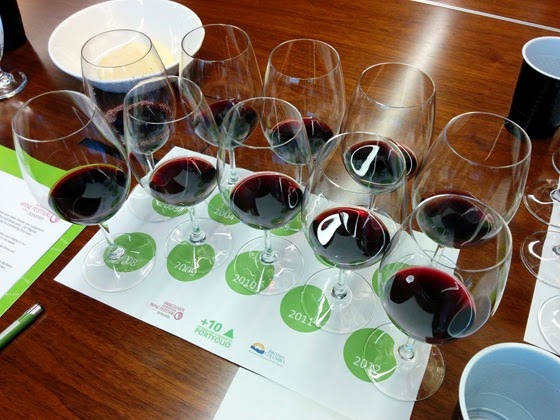 The first two vintages (2003 & 2004) were crushed at the nearby Poplar Grove winery, and made in a simpler Cabernet-Merlot style (without the Malbec and Petit Verdot that would arrive later). Only 500 cases of the inaugural vintage were produced from an 8 ton harvest, and very, very few bottles remain. There was some suggestion that both early vintages are now past their prime, but I actually quite enjoyed the fully mature 2004. The sawdust aromas and thick, sedimentary texture of the 2003 left something to be desired, but the 2004 grew on me easily. It showed a very expressive nose and many interesting secondary flavours one doesn’t often get to enjoy, finishing second for me amongst the five samples in the flight.

Tasting those older wines prompted some reminiscing from Cynthia and David, who were quick to recall early challenges with which they struggled. Although the winery immediately established a superb and now iconic branding that remains unchanged, the initial bottle labelling was not without headaches. The 2003 Portfolio was accidentally printed with estimated details yet to be finalized, including an inaccurate alcohol level and (not yet decided-upon) VQA status! Cynthia explained that the printer wisely choose to pay their VQA fees rather than reprint 6000 bottles. Even two years in there was plenty to overcome: for the 2005 harvest the new winery’s crush rollers were delayed, forcing the Enns (and whomever they could cajole into helping) to personally foot stomp 43 tons of fruit! 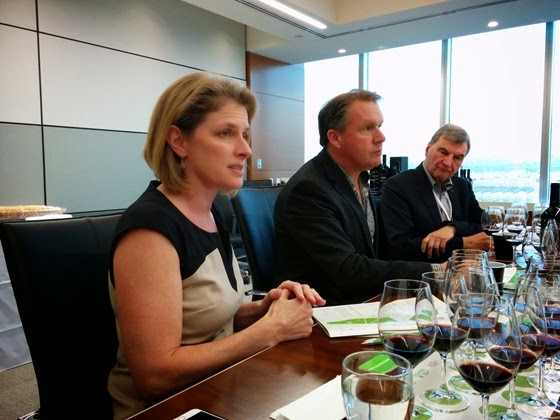 The second flight of wines represented the younger, more recent vintages, those for which the winemaking and equipment have been “dialled in” to meet the target style. Each one could continue aging well, but all provide quite pleasant current enjoyment. By 2008 the formula was relatively well-established, with room for vintage variation of course: half Merlot, one quarter Cabernet Sauvignon, one eighth Cabernet Franc, one sixteenth Malbec, and a percent or two of Petit Verdot. David reported that he produces each variety as an independent blend – mixing the wine from different vineyard blocks – before making the final Portfolio (and the “Blind Trust” second wine). The hundreds of blending trials consume many long days of solid tasting, testing, and re-tasting.

When comparing the 2008 to the earlier 2007 I could immediately detect more oak expression on the nose, with hints of leather and cocoa, but overall more restrained. The palate was clean and juicy, with plenty of life left. This was the first year David put the Cabernet Franc into puncheons, and the year he began fine-tuning whole cluster fermentation. While 2008 was a cool season overall (in the bottom three of the ten), the following year saw an extremely hot, albeit short, growing season. The resulting rapid ripening in 2009 yielded a rich and robust Portfolio, fuller-bodied and concentrated, with Cabernet varieties making up half the blend. The candied, fruit forward aromas were widely appreciated, and I enjoyed the floral hints, with even a hint of barnyard on the finish; it eventually became my close second-favourite of the flight. 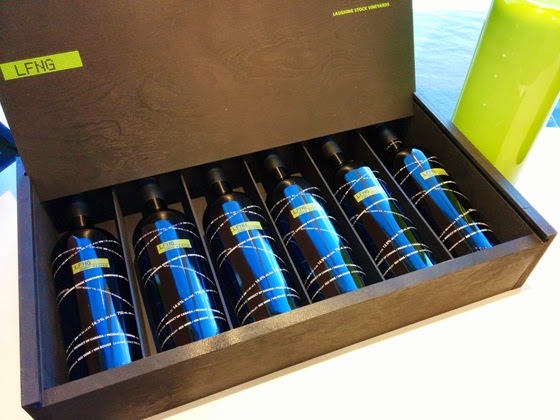 The warm weather in 2009 was short-lived, as 2010 brought the start of two very cool seasons in a row, and a new set of challenges. Despite a slow start and a cool September, rigorous fruit thinning allowed Cabernet Sauvignon to dominate for the first time that year. Merlot decreased to only a third, and Malbec jumped up dramatically, demonstrating the uniqueness of each vintage. At little more than four years old, the 2010 introduced the fresh character of the younger wines, with tart red fruit and licorice flavours. The 2011 was similar, although the chilliest growing season by far resulted in cooler fruit flavours and a lighter-bodied wine. Still, a certain elegance emerged from the lean, bright palate – enough to warrant a prized Lieutenant Governor’s Award for that vintage!

By 2012 growing conditions had dramatically improved, as that year was the first of three excellent seasons still going strong. The celebrated tenth vintage of Portfolio saw a return to somewhat more traditional proportions, although by now David is quite flexible in response to vineyard expression. For such a significant wine, the results could not have been better: the beautiful violet colour introduced a highly aromatic nose, with well integrated oak already. The tannins are predictably young, but the purity of fruit, balance, and delicious molasses hint on the finish gave me an immediate favourite wine of the flight. 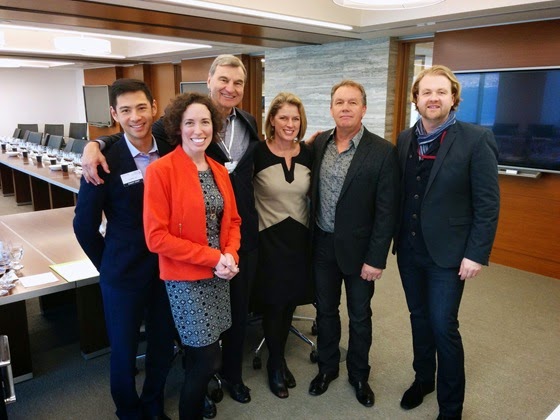 With Kendall recording data at a flip-chart, Sid proceeded to ask for audience favourites, giving each guest two voting opportunities. The overall results showed a sweet spot at several years from vintage: the most preferred wine was the 2009, with 2008 and 2006/2007 coming in second and (tied for) third. Great things are likely still to come from the newer releases, particularly the string of great vintages from 2012-2014. And Portfolio is not the only source of greatness at Laughing Stock, with a full but focused selection of other wines. The winery’s 2007-acquired Osoyoos vineyard has yielded multi-award-winning Syrah since 2008, including the most recent (and now sold out) Platinum Medal 2012 vintage. David even revealed his re-entry into Pinot Noir territory, with two acres under vine on the Naramata Bench, and two vintages in barrel already. There will be many more exciting verticals yet to come!