In addition to some Australian icons, I brought home a few local treats from the Vancouver International Wine Festival. I used to acquire at least a case of BC wine from the Festival’s on-site store, but local retail availability has improved so much in the last few years my Festival take has declined. I no longer need to rush into the Festival store immediately upon entry, because it turns out I already have many of the home-grown rarities on offer. This is a good thing, in that it reflects a diversity of BC wine amongst the Vancouver retail market – let’s hope this sector remains robust in the face of recent regulatory challenges. 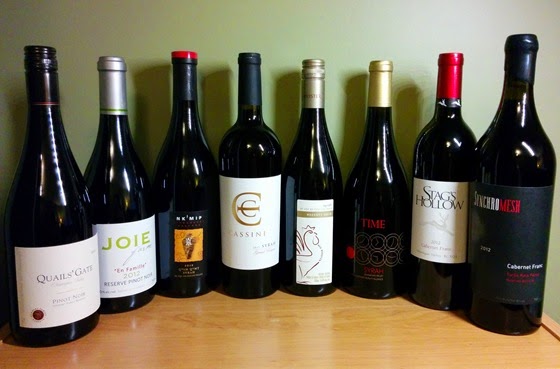 Quails’ Gate Stewart Family Reserve Pinot Noir 2013: The Wine Festival was the first venue to exhibit Quails’ Gate’s newest Reserve Pinot Noir. Having just bottled their flagship wine in December (after 10 months in 50% new French oak), the winery poured and sold the Family Reserve at the Festival as a preview just prior to release of 1,015 cases at the winery. This was new winemaker Nikki Calloway’s first vintage, as she took over from Grant Stanley in August of that year, following great success with Pinot Noir at Mission Hill. VIWF Store/Winery Direct $45

JoieFarm “En Famille” Reserve Pinot Noir 2012: Testing the patience of loyal customers Joie decided to add additional bottle age to their Reserve Pinot starting with the 2012. Rather than aim for release shortly after 8 months in barrel were complete, an additional 18 months were provided for in bottle (original plans were for 24 months). Attentive treatment of diverse grapes (six clones from Naramata, Skaha, and Summerland) has yielded Heidi Noble’s oft-mentioned bacon flavours, in what the winery feels is their most robust Pinot Noir to date; worthy of a prestigious gold medal at the 2014 Decanter Awards. Swirl VQA Store $36

Nk’Mip Qwam Qwmt Syrah 2010: I’ve had an empty spot on the shelf awaiting this bottle for several months. Although officially released back in September 2013, it has taken some time to show up on store shelves (many still sell the 2009 in fact). Previous vintages are awash in trophies, and this one continued the trend with a gold medal at the 2014 National Wine Awards. Nk’Mip’s southern Okanagan vineyards consistently yield superb Syrah from ideal terroir. We should consider ourselves lucky it’s been afforded some bottle age so as to knit together the dense palate. BC Liquor Stores $35

Cassini Cellars Grand Reserve Syrah 2011: Adrian Cassini was present at the Wine Festival with this small lot gem, very much deserving of the moniker. Just three barrels worth were apparently culled from the remaining 22 barrels of Collector’s Series Syrah. I always enjoy and appreciate when the term “Reserve” is used in its most literal sense. Despite not being mentioned on the Cassini website yet, the wine was awarded a silver medal at the National Wine Awards last year. At around the same time John Schreiner described it as “complex and brooding” – worthy of time in my cellar to intimidate the other bottles. VIWF Store/Winery Direct $39

Red Rooster Reserve Syrah 2012: Another Wine Festival snag, which is rarely seen outside the winery. Winemaker Karen Gillis was personally present to pour and discuss the wine, of which a previous vintage (2010) brought her a Lieutenant Governor’s Award. The winery’s Syrah webpage was just updated, listing only 377 cases produced, with some confusion as to provenance: although initially said to be sourced from Oliver, it is later said to be from the Similkameen Valley’s Vanessa Vineyard, with a touch of Osoyoos Petit Verdot. Seeing as the VQA certification is for the less specific “British Columbia” appellation the dual valley origin seems most likely. VIWF Store/Winery Direct $30

TIME Syrah 2012: The very first varietal Syrah from Harry McWatters’ relatively new winery project on the Black Sage Bench (although the vineyard itself is quite mature). Like other new BC Syrah it was previewed at the Wine Festival, where I enjoyed the savoury aromas, clean dark fruit, and spicy pepper flavours. TIME’s first Cabernet Franc (from the same vintage), released last year, was extremely popular and a superb value. This small 100 case production could sell out quite rapidly, but one would imagine Harry is holding some back for sale at his new winery and tasting room when it opens early fall. VIWF Store/Winery Direct $35

Stag’s Hollow Cabernet Franc 2012: I got the chance to sample this beauty at the tasting that followed The Grape Debate in January – it was a highlight of the evening. The wine received a silver medal at the BC Wine Awards last fall, and contains grapes from four different geographically distinct vineyards: 8% of the wine is actually a blend of (Okanagan Falls) Merlot and (Osoyoos) Petit Verdot. Fresh, ripe, and very well balanced, it should be just as memorable after a couple years in the cellar. Swirl VQA Store $31

Synchromesh Reserve Cabernet Franc 2012: Having been hearing more and more buzz about Synchromesh’s red program recently (following a 2013 Lieutenant Governor’s Award for Riesling), I paid special attention when I saw this unknown wine at Marquis Wine Cellars. A short conversation with proprietor Alan Dickinson provided description of a particularly pure and exquisite single barrel (neutral French oak) from Turtle Rock Farms on the Naramata Bench. The 23 cases produced were primarily intended for the Synchromesh Wine Club; a handful of lucky restaurants and stores got one case each. Marquis Wine Cellars $55