The BC Wine Appreciation Society recently hosted their third annual double blind varietal wine tasting, pitting nine BC bottles against one another and three international competitors. Previous years featured Syrah and Cabernet Franc, making Pinot Noir an ideal candidate this time around. Although Pinot Noir has remained the second-most-planted red grape in BC for at least fifteen years it has recently begun to garner more attention. Last year’s naming of the Mission Hill Martin’s Lane 2011 Pinot Noir as “World’s Best” at the Decanter Awards put an international spotlight on the excellent work being done here. 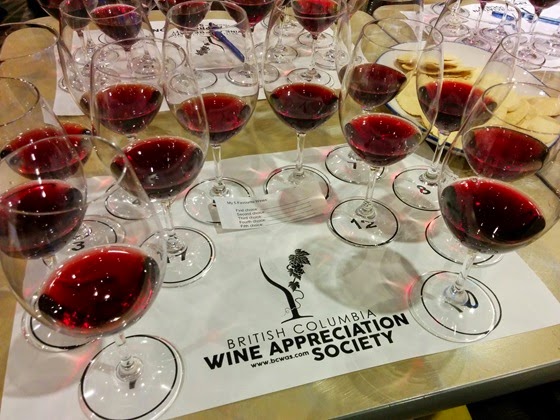 There exist a number of experienced and talented winemakers focussed – sometimes exclusively – on Pinot Noir in our local industry. One such person is Bradley Cooper, owner of Black Cloud, plus current Winemaker at Serendipity Winery. Brad was generous enough to join the Society for the Blind Tasting, to serve as Moderator and provide insight on Pinot Noir and the BC wine industry. Brad’s years of service at Township 7 helped build the winemaking experience that allowed him and his wife Audralee Daum to launch their own “garagiste” wine brand Black Cloud a few years ago, making small quantities of Pinot Noir-exclusive wines.

Brad reminded everyone of the renaissance Pinot Noir experienced following the release of the movie Sideways in 2004. The film effectively raised the profile of Pinot Noir in North America, providing consumers with a re-introduction to this complex and remarkably drinkable wine. While many local wineries have relatively long histories with Pinot Noir, the last decade in particular has offered up winemakers the freedom to explore their passion and hone their techniques. Along with the more well known, long-running Pinot Noir producers (e.g., Blue Mountain, Quails’ Gate), a great number of smaller wineries have existed historically or have come on stream in the last few years. 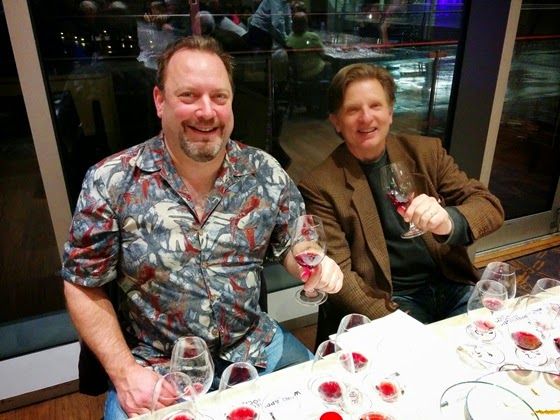 Just like past blind tastings, this year featured plenty of delicious wines along with many surprises when the popular vote results were revealed. The wines seemed to range from those in the lighter, more delicate spectrum to dark, rich, and oak-influenced: we smelled and tasted flowers and earth, raspberry, orange, cherries, strawberries and more; plus leather, mushrooms, barnyard, and toasted oak. Knowing the broad range in which Pinot Noir is grown in BC, interpretations and hypotheses were left wide open: in the Okanagan Valley alone it is planted from the desert of Osoyoos to the forested hills of Vernon. 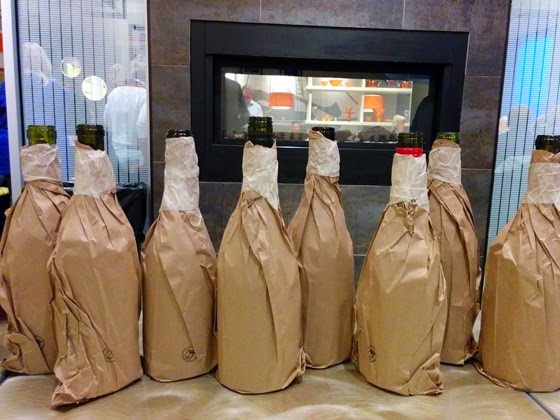 Participants received a short ballot on which to record their top five favourites, in rank order, to analyze the popular vote using a Borda Count spreadsheet. This method of assigning points is fairly robust in dealing with truncated ballots, which is why a ranking of all twelve wines was not required. Three different scoring systems were used to ensure redundancy, and provided the Society Executive with a overview of favourites: wines were thus revealed in three groups. Latter analyses based exclusively on the twelve-point scoring system (i.e., 12 points for every first place ballot ranking, 11 points for second, etc.) enabled a complete ranking to be compiled. 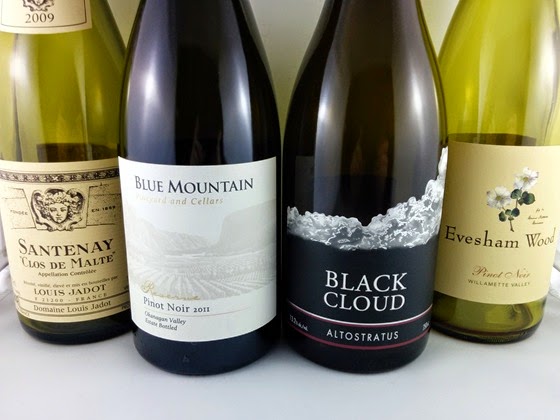 The bottom four wines included two of the three international contributions to the tasting. Last year’s Cabernet Franc blind tasting found the French contribution least favoured, and surprisingly a solid last place finish was once again accorded to old world viniculture. The relatively pricey, aged 2009 vintage of Domaine Louis Jadot Santenay “Clos de Malte” from the Côte du Beaune region of Burgundy simply didn’t find favour amongst BC wine aficionados. Rounding out the bottom four, but scoring significantly higher than the Burgundy, were the Black Cloud 2011 “Altostratus”, Oregon’s Evesham Wood 2013 vintage, and the 2011 Reserve from Blue Mountain. Both the Black Cloud and Blue Mountain were derived from the cool 2011 vintage, yielding bright berry fruit with hints of leather; but perhaps just a bit too tart and lean for some.

The middle group of wines – ranked 8th to 5th – contained some well-known favourites, with significant history behind them. CedarCreek’s 2012 Platinum Block 2 Pinot Noir represents a family of reserve-tier wines going back many years, and was split into block-specific wines starting in 2011. In comparison to what the winery describes as structured, chocolate and spice character in Block 4, the gold medal Block 2 yields a more delicate, floral profile thanks to surprisingly different soils in the adjacent blocks. Alongside CedarCreek we revealed the 2012 vintage from new Lake Country winery 50th Parallel. After many years at Quails’ Gate, Winemaker Grant Stanley partnered with Curtis & Sheri-Lee Krouzel to build 50th Parallel, which focuses on premium Pinot Noir and opened for business in 2013. As the young vineyards mature and Grant becomes even better acquainted with the terroir, the future of Pinot Noir at 50th Parallel should be a prosperous one. 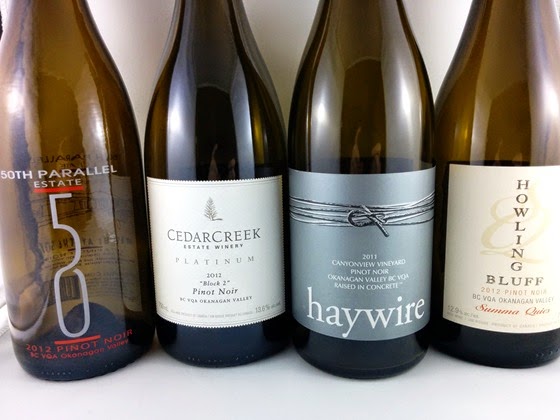 Two notable award-winning wines and wineries followed, as Haywire and Howling Bluff garnered support in the top half of the favourites. Both wineries are the recipients of Lieutenant Governor’s Awards for their Pinot Noir, with the creamy 2011 Haywire Canyonview having received the award just last year. Summerland’s Haywire (based at Okanagan Crush Pad) is going all in with Pinot Noir, planting up to 50 acres of own-rooted vines in the nearby Garnet Valley. Across the lake on the Naramata Bench, Luke Smith’s Howling Bluff has received not only two Lt. Governor’s Awards for Pinot Noir (2006 & 2009) but received Red Wine of the Year honours from the Canadian Wine Awards (for his 2008 Pinot Noir). We received the fortunate opportunity to taste the yet-to-be-released, juicy 2012 Summa Quies vintage, the reserve tier from Luke’s premier estate vineyard.

Closely ranked in fourth and third place respectively were Meyer’s 2012 single vineyard offering from Kelowna’s Reimer Vineyard, and Nk’Mip’s Osoyoos-appellation Qwam Qwmt (Reserve) from the same superb vintage. Despite being sourced from vineyards at nearly opposite ends of the Okanagan, the wines presented similarly intense, dark palates; with the expressive toasted oak aromas from Meyer yielding to slightly more subtle perfumed red fruit from Nk’Mip. At last year’s National Wine Awards the Meyer took home a silver medal in competition, while the Nk’Mip was awarded gold. 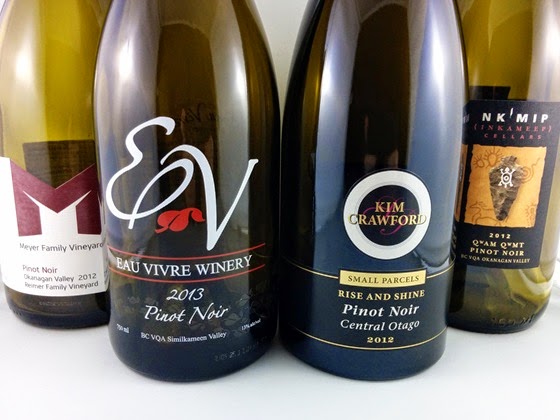 With only two wines remaining we finally discovered the group’s favourite BC bottle of the tasting, in the form of Eau Vivre’s 2013, the only contender from the Similkameen Valley. A close second was New Zealand’s Kim Crawford Small Parcels “Rise and Shine” 2012, bringing more rich, dark complexity from the southern hemisphere. In 2012 and 2013 Eau Vivre won consecutive Lieutenant Governor’s Awards for their 2009 and 2010 Pinot Noir. The newest 2013 vintage provided impressive, complex aromas of spiced cherries, with hints of earthy mushrooms. The rich palate provided more cherries, cinnamon, and cloves, with a touch of marmalade on toast: the wine appeared in the Top Five ranking on 32 of 48 ballots. Those with a little bit left in their glasses were lucky indeed; revisiting the wines now exposed proved an engaging conclusion to a very thought-provoking evening!