Some highly anticipated new releases put a smile on my face this month, including the arrival of rich red wines from CedarCreek in my latest Platinum Club delivery. A couple even served to resurrect Platinum reserve wines not made since 2009 – both very good candidates for the cellar. Joining them are unexpected acquisitions and entirely brand new wines alongside reliable favourites reaping the rewards of the healthy 2012 vintage. 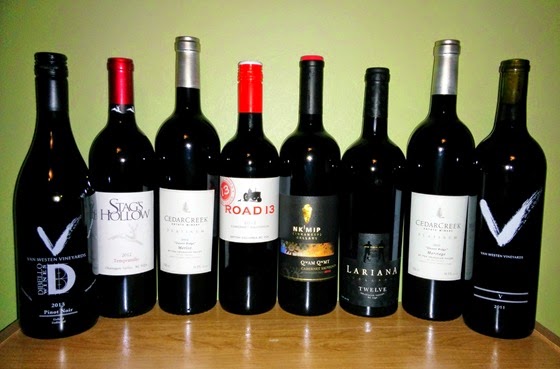 Van Westen “VD” 2013 Pinot Noir: Rob Van Westen has been partnering with industry veteran Tom Di Bello (of CedarCreek and Burrowing Owl, among others) for three years so far, making small proportions of their own cheeky Pinot Noir. The “VD” moniker is coupled with an annual Valentine’s Day release, allowing no end to the puns they both enjoy when marketing the wine. It’s a Pinot Noir in the complex, earthy style, with toasty notes of clove and tobacco mingling with the bright berries and rich cherry fruit. From 96 cases in the first year, to 125 from 2012, now only 51 cases were made of the 2013, which Rob strongly recommends cellaring. Winery Direct $40

Stag’s Hollow 2012 Tempranillo: Fewer than a handful of varietal Tempranillo exist in BC, but the always adventurous Dwight Sick at Stag’s Hollow is enjoying the challenge of working with what Anthony Gismondi calls “a moody grape here in BC.” Winery owners Larry Gerelus and Linda Pruegger have actually planted Tempranillo in their Okanagan Falls estate vineyard, from which half the blend comprising 305 cases is harvested, plus the 10% Merlot component. This fragrant, fruity, savoury wine brought home a silver medal at the National Wine Awards last year. Swirl VQA Store $33

CedarCreek 2012 Platinum “Desert Ridge” Merlot: One of the long-lost Platinum reds, not seen since the 2009 vintage. The winery’s Osoyoos vineyard is home to eleven acres of Merlot, and selected rows typically yield the reserve-tier Merlot desired for the Platinum series. However, the 2010 and 2011 vintages were deemed not quite sufficient for a Platinum designation, making this a true reserve wine, only produced when deserving of the moniker. After 20 months in French oak, 550 cases were bottled last August, and finally released this spring after a long absence. Winery Direct $40

Road 13 2012 Cabernet Sauvignon: Originally released at the winery last spring, the 92 cases produced sold out in two weeks after Proprietor Mick Luckhurst declared it their best Cabernet ever. The winery hasn’t produced a varietal Cabernet Sauvignon since the 2007 “farewell” vintage, but times change and the winery is no longer as focused on blends as they were several years ago. The 2012 came from 1.3 acres on the Osoyoos East Bench, plus about one hundred kilograms of grapes (6% of the total) from the Similkameen Valley’s renowned Blind Creek Vineyard. Amazingly a few bottles found their way to Vancouver, and flew under the radar for the past ten months! Burrard Liquor Store $34

Nk’Mip 2012 Qwam Qwmt Cabernet Sauvignon: The Osoyoos vineyards that produce Nk’Mip’s Cabernet Sauvignon are legendary, yielding grapes sold to many other wineries as well. After pushing through challenging conditions in 2011 the winery, and wine, seems back to form with the receipt of a gold medal from the National Wine Awards, where praise was given for the “very fruity, crowd-pleasing style.” Although 2011 garnered a silver medal, there was criticism for heavy oak treatment overwhelming the delicate fruit that year. The grapes in 2012 appear to have been ripe enough to accommodate 18 months in 90% French oak: with 14.8% alcohol there is still nearly 6 g/L of residual sugar. Swirl VQA Store $33

Lariana 2012 TWELVE: One of only two wines produced by this young and focused Osoyoos winery. After replacing an existing orchard in 2007 proprietors Dan & Carol Scott released a 2012 Viognier that garnered stellar praise from John Schreiner. The 2013 Viognier is now available, and with it this exciting red blend called simply TWELVE, presumably an homage to the winery’s first vintage. Consulting Winemaker Senka Tennant (founder of Black Hills and Terravista) crafted the blend from Cabernet Sauvignon, Syrah, Merlot, and Carménère, harvested from Lariana’s five-acre lakefront vineyard abutting the US border. The 480 cases produced are actually disseminating broadly, including to many VQA stores. Winery Direct $45

CedarCreek 2012 Platinum “Desert Ridge” Meritage: Like the aforementioned Merlot, the Platinum Meritage has been absent from the winery’s portfolio since the acclaimed 2009. With the even better 2012 vintage finally yielding fruit the winery felt was appropriate for the Platinum tier, the newest release of 525 cases will be snapped up by collectors. This complex wine is a blend of 54% Merlot, 32% Cabernet Sauvignon, 7% Cabernet Franc, 4% Malbec, and 3% Petit Verdot. For a taste of the baby brother try the new $25 Meritage (thoughtfully crafted from the same five varieties) that complements the existing $20 Merlot Cabernet. Winery Direct $45

Van Westen 2011 “V”: Rob Van Westen has been producing his age-worthy “Voluptuous” red blend (typically two thirds Merlot and one third Cabernet Franc) for several years, but added a more complex Bordeaux-style blend in 2009. It is appropriately given the Roman numeral “V” to signify the five varieties included, consisting of 49% Merlot, 24% Malbec, 21% Cabernet Franc, 4% Cabernet Sauvignon, and 2% Petit Verdot in 2011. Like Rob’s other reds, it is very age-worthy, and previous releases have been suggested to benefit from up to several years in the cellar. Focusing on Merlot and Malbec in the cool 2011 vintage should hopefully continue the trend of praise he has received from critics such as Anthony Gismondi, who determined the 2010 to be “really impressive for the vintage.” Winery Direct $35