The most recent BC Wine Appreciation Society tasting was particularly delicious, because it featured both wine and cheese from Upper Bench Winery & Creamery. This young Penticton venture is the product of Gavin and Shana Miller, experienced veterans of the Okanagan wine industry. It was opened just four years ago, but Upper Bench has quickly become a popular stop at the south end of the Naramata Bench due to the Millers’ collective expertise. 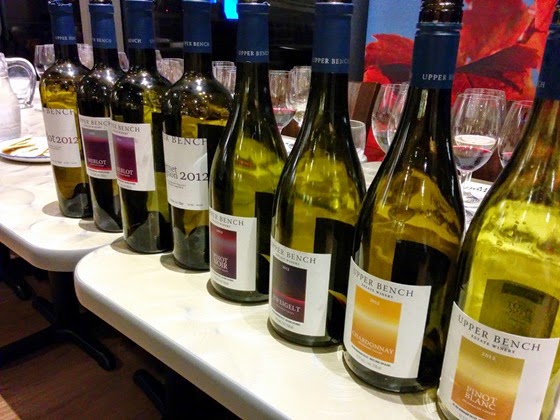 John Schreiner details the Millers’ early years in the Okanagan in his Okanagan Wine Tour Guide (5th Edition). Gavin hails from Britain, and Shana from Nova Scotia: the couple met in Penticton in 1995 and then settled down there in 1997. Drawn to wine, Gavin gained experience throughout the valley and ended up making wine at both Poplar Grove and Painted Rock (at one point concurrently). At the same time, Shana was honing her craft making cheese at Poplar Grove. After the 2010 vintage the Millers took over a property being sold in the Holman Lang bankruptcy proceedings. They spent significant time and effort revamping the buildings and mature seven-acre vineyard to realize their dream.

The Upper Bench estate vineyard in Penticton includes three white varieties: Pinot Blanc, Riesling, and Chardonnay. We began with a taste of the 2012 Pinot Blanc, noting a slightly herbaceous quality reminiscent of Sauvignon Blanc. Aromas of citrus and green pear led into a refreshing, crisp palate that revealed richer stone fruit and tropical notes as it warmed. Gavin originally produced a varietal Pinot Gris from nearby contracted vineyards, but the variety has now been cut from his portfolio. Without guaranteed estate fruit, and given his own preference for Blanc over the ubiquitous Gris, Gavin elected to bid adieu for the time being. 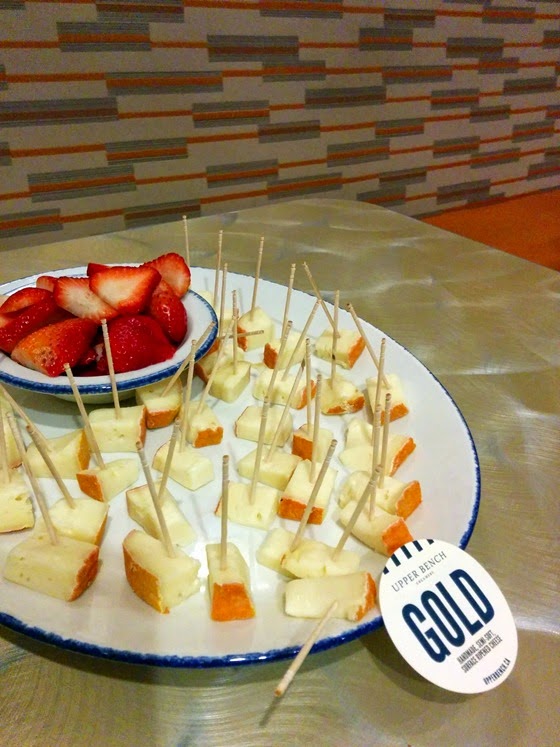 We next got an opportunity to enjoy the marvellous 2013 Chardonnay, making a strong case for the joy of cheese pairing. As we admired the soft orchard fruit aromas in the Chardonnay, Shana showed off a special batch of her “Gold” semi-soft, washed rind cheese – washed with the very same wine in our glasses! Gavin let half the Chardonnay ferment and age sur lie in new French oak for three months, yielding a superbly well-integrated profile. The rich texture in the Chardonnay matched the creamy cheese, with both providing fruity, apple flavours and a long, aromatic finish.

The reds started with 2012 Zweigelt, from a relatively rare grape in BC – representing less than 1% of red varieties in acreage. In fact, Gavin recently grafted over a majority of his legacy Zweigelt to Cabernet Sauvignon, leaving him with less than one acre in total. The wine has a bit of a cult following however, and he plans on continuing to produce about 100 cases per year. The 2012 spent 18 months in neutral oak, and displayed a complex nose of raspberry, leather, and toasty earth. The red berry character continued into the bright palate, making for a great pairing with dark chocolate. (Revisiting the wine later revealed surprisingly expressive cocoa aromas in fact.) 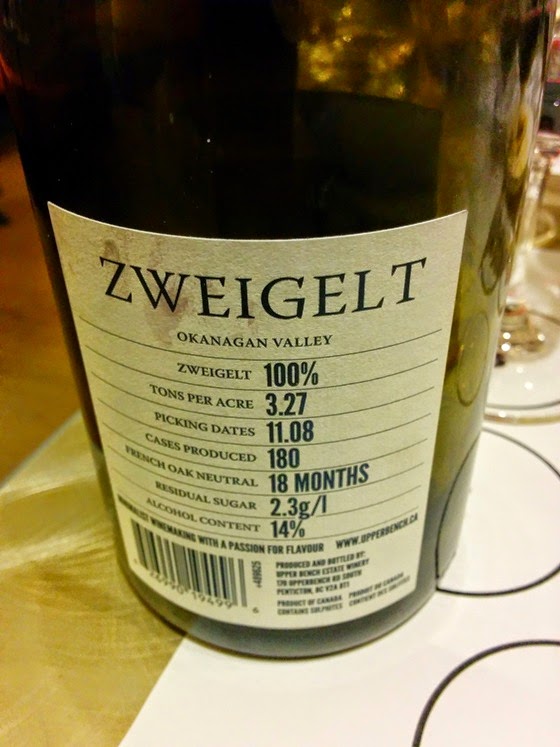 Pinot Noir from the same excellent 2012 vintage was next, showing off a fresh and clean nose of cranberry and young leather. The juicy fruit-forward palate revealed more of the same cranberries and strawberries, with a hint of earth. A relatively small amount of this wine was produced (331 cases), and few bottles remain after some excellent press recently, including a 90-point score and very positive write-up in the Globe & Mail by Beppi Crosariol.

The brand new 2012 Estate Cabernet Sauvignon followed, fresh from 20 months in 40% new French oak. The jump into a darker fruit palate from the Pinot Noir was readily apparent, with mint, eucalyptus, vanilla, and currants yielding to licorice and more currants in a smooth palate. The soft tannins and long finish make the wine very drinkable already, explaining why it wasn’t relegated to last in the tasting. Because the Cabernet is cropped low, there will never be a large quantity produced: the 2012 saw only 188 cases, at 3.1 tons per acre (with 2013 & 2014 at just two tons per acre). 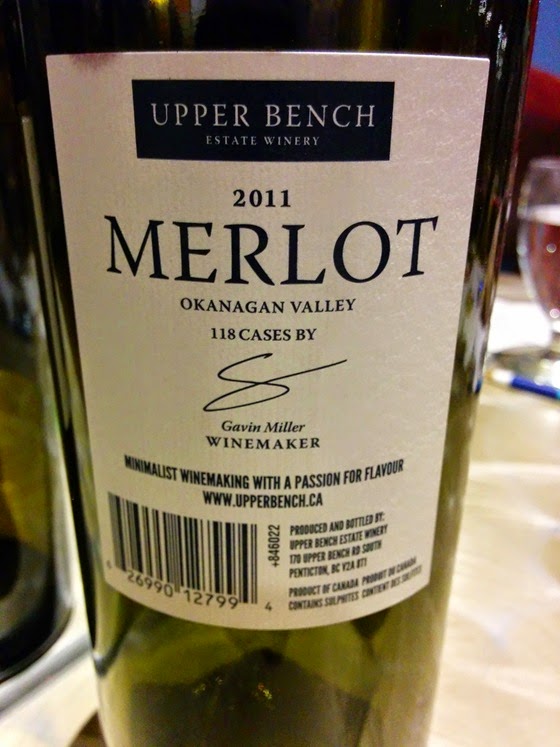 An exciting group of Merlot was awaiting us to conclude the reds: Gavin is a major fan of Merlot, and feels it doesn’t get nearly the credit it deserves in BC. The 2011 vintage was his first, blending the estate fruit with that of the neighbouring Margaretta Vineyard; it spent 18 months in barrel before release in 2013. After some time in bottle it was ready to show off perfumed blueberries and leather, with dusty tannins and a long, tart finish that evolved into caramel notes.

For 2012 the Estate Merlot was bottled separately in 154 cases after 20 months in French oak. A second batch of 440 cases was produced from the neighbouring Drunken Dog and Four Shadows vineyards. The blended 2012, compared to the 2011, displayed noticeably darker fruit elements on the nose, to be expected from a much warmer and more prosperous vintage. The acidity was better balanced, the body fuller, and the tannins more prevalent in a wine showing generally richer character throughout. The 2012 Estate Merlot was similarly rich, and particularly smooth-bodied: earth and touches of caramelized sugar joined the ripe fruit on the palate, to yield an enthusiastically easy-drinking wine. 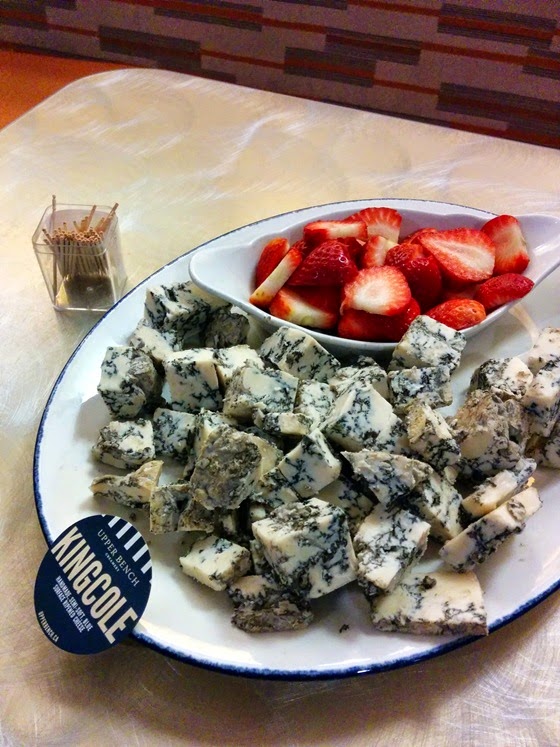 A fourth and final sample of Merlot came to us straight from barrels of 2013 estate vineyard fruit, not quite having completed the 18 months minimum aging Gavin favours. Naturally, the barrel influence was still quite strong, but surprisingly ripe fruit emerged on the nose, almost Port-like in character. The texture was smooth, albeit more noticeably tannic when comparing against the 2012 Estate. It was easy to savour flavours of chocolate and jammy toast however, providing a great deal of optimism for what will end up in bottle from yet another very good vintage.

With the gamut of rich reds still being swirled, and mouth-watering Brie and Blue cheeses still on hand, guests received a final wine in the form of chilled 2013 Riesling. The delicate tropical palate would prove ideal for concluding the tasting on a refreshing note. The honeyed nose revealed very slight petrol hints, with fresh citrus and pineapple dominating. A mere 8.3 grams of residual sugar made for supremely nice balance with the moderate acidity, finishing crisp and relatively dry. 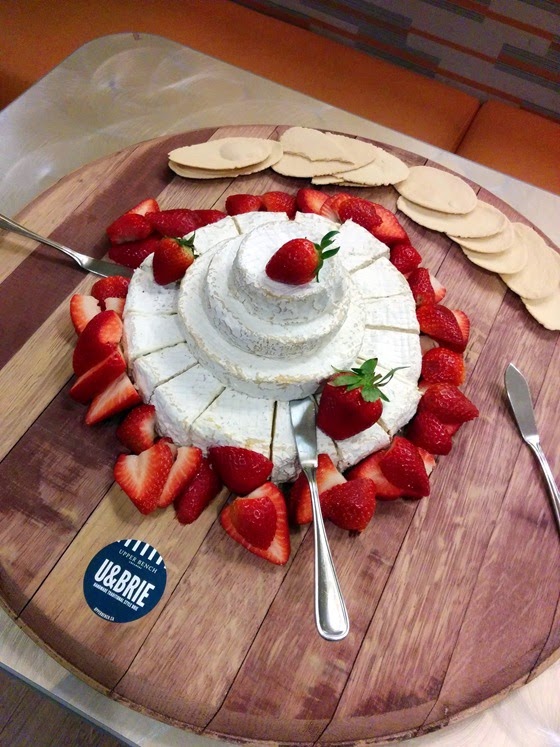 With Upper Bench just getting started, there is plenty to look forward to from Gavin and Shana. They recently acquired a Naramata vineyard containing Cabernet Franc – a key red missing from their Penticton acreage. About 300 cases of a new 2013 Merlot-Cabernet Franc blend will soon be released under the title of “Yard Wine”. The name is an homage to wine they used to make for themselves from their own home’s backyard vineyard. As the Estate Vineyard recently reached twenty years of age, we can expect even greater complexity and evolution, plus more specialization amongst Merlot and Cabernet Sauvignon. And thanks to Shana, there will always be plenty of delicious cheese with which to pair it all!