Given my participation in a great many local wine clubs hardly a month goes by without the arrival of some exciting new bottles. This month saw my second shipment received since joining Poplar Grove’s club, along with Moon Curser’s final package of the year, and my highly anticipated annual case from Blue Mountain. In fact, with the addition of a couple small orders from Burrowing Owl and Stag’s Hollow every bottle in this month’s collectibles list was acquired directly from the wineries in question. Increasingly, the finest and most interesting wines seem to be available solely through direct sales, necessitating keen attention to release dates and details. 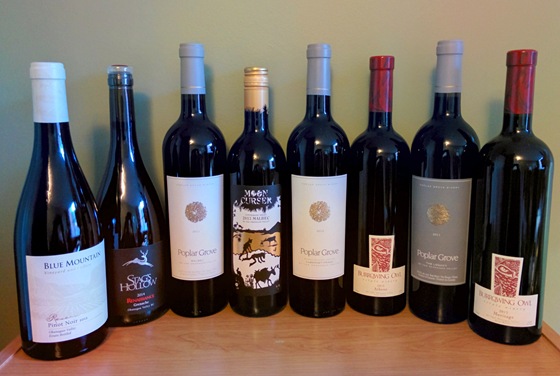 Blue Mountain 2012 Reserve Pinot Noir: One of the most famous and legendary Pinot Noir in BC, and consistently amongst the very best. My recent case of wines from the Blue Mountain Priority Group contained this delightful blend of five French clones, from an ideal vintage. The Priority Group program assembles one’s favoured wines over the course of the year and ships when the case is ready: unfortunately the popular Reserve Pinot is long since sold out at the winery, as happens every year. When released in August it had spent two years maturing in bottle following ten months in French oak barrels after fermentation with fully native yeast. Winery Direct $40

Stag’s Hollow 2014 Renaissance Grenache: Only six months ago I was fortunate enough to obtain the 2013 Grenache from my local VQA store. It can actually still be found on the shelf there, but the newest release will likely remain winery exclusive. Winemaker Dwight Sick considers the 2014 to be his best Grenache yet, deserving of the exclusive “Renaissance” reserve-tier label. Careful selection and painstaking techniques have yielded a mere 65 cases however, so it will be short-lived. Released on International Grenache Day (the third Friday in September), it then received enthusiastic praise from John Schreiner, having “totally seduced him” into a rare 94-point score. Winery Direct $40

Poplar Grove 2011 Malbec: Consumer appreciation for Malbec is pushing more BC wineries to release single varietal wines from grapes previously blended into Meritage. As more winemakers are learning the intricacies and expression of Malbec on its own it can only lead to higher quality local examples. Poplar Grove first produced a 2009 Malbec and has now released a small lot (250 cases) from the 2011 vintage, exclusively to members of their Wine Club (at present). It should be interesting to see what the cool 2011 season has offered Poplar Grove, who socked it away for 21 months in French oak and then another 18 months in bottle. A drab of 6% Merlot was added to flesh out the wine, said to yield a long finish of cherries, mulberry, and prune after the nose of violets, caramel, and blueberry. Winery Direct $35

Moon Curser 2013 Contraband Series Malbec: A new release included in my latest Wine Club shipment, from a limited production of 290 cases. The 2013 Malbec has been elevated to the winery’s Contraband Series to reflect the single-vineyard nature of the wine, harvested from a single block in the Osoyoos East Bench estate vineyards (and aged in French oak, 25% new). From the warm and generous 2013 vintage I’m expecting a full-bodied, ripe and plush example, reflecting Winemaker Chris Tolley’s growing experience with the variety – past vintages have received solid accolades and competition success. Winery Direct $32

Poplar Grove 2012 Munson Mountain Cabernet Franc: Poplar Grove goes to great lengths in offering value for Wine Club members, with at least several exclusive wines produced each year. The home vineyard on Munson Mountain outside Penticton yields high quality Cabernet Franc that has ended up in a small lot, single-vineyard bottling since 2010 (after being planted in 2008). The winery is very pleased with the results from 2012’s “fantastic growing season” and this Cabernet Franc should help provide the proof, with mouth-watering “hearty flavours of black cherry and cassis married with hints of almond and strawberry jam.” It was harvested very last, in early November, and given 21 months in French oak, plus additional bottle time before release. Winery Direct $40

Burrowing Owl 2013 Athene: Seeing as I picked up the 2012 Athene at retail in April the 2013 may have been released a little early given growing demand, helped along by three fewer months in oak (18 versus 21 for the 2012 vintage). The blend remains virtually identical at 52% Syrah and 48% Cabernet Sauvignon co-fermented and aged, with American oak avoided entirely this time in place of 90% French and 10% Hungarian. The winery speaks of near-perfect conditions in 2013, yielding all the best flavour profiles of each grape: blackberry, sage, cinnamon, pepper, cassis, black cherry, and more! The well balanced acidity and full bodied ripe tannins should provide for a long and healthy life. Winery Direct $38

Poplar Grove 2011 The Legacy: The third red included in this fall’s Wine Club packages, The Legacy is Poplar Grove’s icon red blend, with varying proportions of the Bordeaux varieties each year. For 2011 it includes 43% Merlot, 41% Cabernet Franc, 13% Malbec, and a mere 3% Cabernet Sauvignon – a substantial drop from the 23% found in 2010, which also had twice as much Malbec and half as much Cabernet Franc. The 2010 was just released earlier this year, but the winery is moving to a four-year release schedule for the Legacy, instead of the previous cumbersome five-year delay: further details from Winemaker Stefan Arnason accompany John Schreiner’s enthusiastic 94-point review. Both vintages yielded small production quantities and will sell quickly leading up to the highly anticipated 2012: 350 cases of 2010 and 550 of 2011. Winery Direct $50

Burrowing Owl 2012 Meritage: One of my favourite things about Burrowing Owl (after the delicious wines) is their willingness to ship as few as two bottles. You have to pay the same $20 shipping rate for 2, 4, 6, or 12 bottles, but it provides flexibility given staggered release dates. With the Athene I also obtained the brand new Meritage, a wine I have been eagerly awaiting in order to continue an established vertical collection; adding the 2012 allows me to finally open the 2006, which likely recently peaked. The 2012 continues using successful proportions that favour Cabernet Franc (43%) and Merlot (28%), yielding a ripe, fruit forward profile that has increasingly impressed critics such as Anthony Gismondi. Into the cellar it goes until bumped out by the 2018 vintage released in six years! Winery Direct $45

is there anything better that having delicious wine arrive at your door??

Mean Dean,
the only thing better is when you realize it's ready to drink!