Painted Rock Estate Winery produces a mere five wines in their tightly focused portfolio: three varietal reds, a blend, and one white have remained consistent since the winery opened in 2009. Proprietor John Skinner settled on a high end Chardonnay despite what must have been the allure of easily marketable Pinot Gris or Sauvignon Blanc. Although a couple of summer release Rosé have been bled off from the reds, and a small lot Cabernet Franc was recently released, the focus remains present, reflecting the integrity that surrounds this Skaha Bench winery. 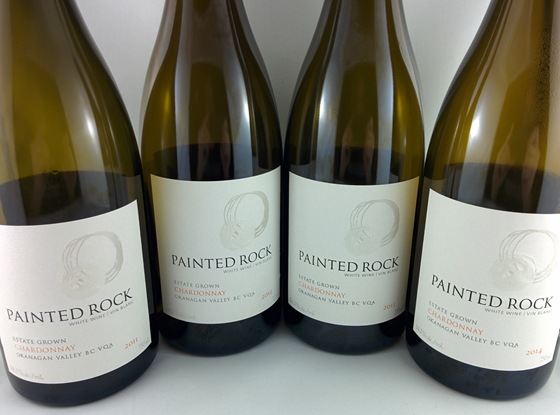 As an early subscriber to the Wine Club, I’ve been afforded regular access to the hard-to-find Chardonnay, which is typically only found outside the tasting room in very selected stores and restaurants. Upon receiving an allotment of 2014 Chardonnay this summer I realized I had four vintages available, going back to 2011, and the idea for a vertical tasting was born. A group of wine aficionados recently joined me to sample from one of BC’s tastiest Chardonnay, alongside some other local and international comparisons.

After rousing our palates with the delightful fresh citrus flavours of Blue Mountain 2007 Blanc de Blancs we began with a taste of the newest Painted Rock release from last year’s superb 2014 vintage. The wine immediately defied expectations with a pronounced aromatic nose loaded with tropical fruit. Some guests were strongly reminded (in a good way) of a barrel-fermented Sauvignon Blanc such as Clos du Soleil’s delicious Fumé Blanc. The flavour palate continued the same unexpected and lip-smacking theme, with peaches and roasted pineapple rising to the forefront. It became an easy and early favourite that would persist throughout the tasting.

Since producing the first vintage of Chardonnay in 2008 Painted Rock have fine-tuned the harvest techniques and barrel program over several years. The use of new oak has progressively decreased, while time in barrel has increased. By 2014 aging had reached 5.5 months, with 40% in new oak (alongside 20% undergoing malolactic fermentation in stainless steel). “Micro-harvests” were initiated in recent vintages, wherein 2-3 separate picks over 7-10 days seek to harvest selected clusters at prime ripeness, capturing desired attributes.

Moving backwards we next sampled from the 2013, produced under identical conditions as the latter 2014, but now with an additional year of maturity in place. The tropical character found in the younger wine was restrained here, with a more traditional nose showing pleasant brioche aromas. An appealing creamy texture was in place, with apple and popcorn flavours present, although exotic hints of guava and other fruit successfully peeked through the long finish. Overall, a well-liked follow-up and suggestion of the future for 2014. 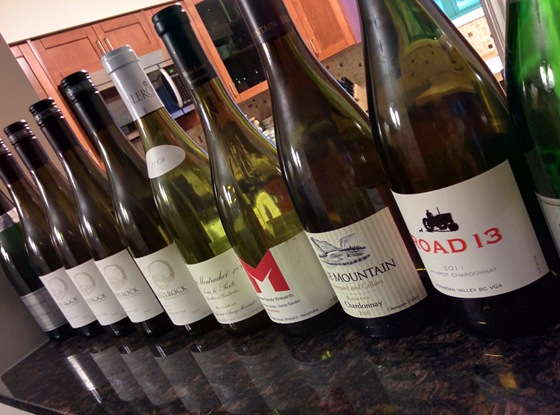 The 2012 vintage was aged a similar 5.5 months, but this time 50% found new French oak, with half the total wine undergoing malolactic fermentation. Upon sampling this older vintage a very similar nose to the 2013 was apparent, with inviting fresh apple pie aromas. On the palate it drew parallels as well, but some comments focused on the hot finish. In fact, all four vintages under examination exceed 14% alcohol, with 2012 and 2013 reaching a steep 14.5%. The combination of alcohol and a somewhat more oak-influenced palate restrained guests’ enjoyment of 2012, with the sublime 2014 still dominating our discussion.

With some question about the direction suggested in 2012 there was significant wonder for what 2011 would yield, coming from 5 months sur lie in 100% new French oak. To our surprise a wonderfully integrated, luscious nose was present – clearly an oaked wine but elegant and aging very well indeed. The cool vintage had bestowed bright acidity to keep the flavours lively, with a generous, toasty palate finding great favour amongst all those present. It became an easy second-place finisher after the 2014, despite notable differences in profile.

As guests imagined earlier vintages, and considered the future of those under investigation, we sampled from some other local champions for a hint. Meyer Vineyards’ 2010 Tribute Chardonnay was named number one BC wine of 2012 by Wine Access magazine, giving us a superb example of the vintage. A perfectly mature palate of sweet fruit in good acid balance showed honey and lemon flavours with a rich, creamy texture. Similar character from Blue Mountain’s Reserve of the same vintage was also present, with an overall highly enjoyable caramel apple profile thanks to fresh acidity and vigorous fruit focus still going strong five years later. 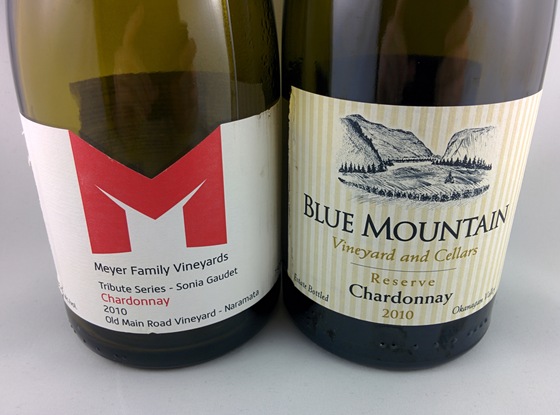 What, then, has this illuminating, albeit short, vertical tasting revealed? If Painted Rock’s most recent 2014 release has indicated the determination of a house style we can look forward to aromatic and fruit-forward refreshment in the years to come. There is no reason to think that painstaking but rewarding harvest practices will not continue, and coupled with a focus on bright acidity and subtle use of oak the wines to come should age quite superbly; the winery consistently suggests up to five years from vintage is possible. It’s almost a necessity to cellar at least one bottle of the very exciting 2014 to examine how it develops over time – this may be only the first of many vertical tastings!