Foxtrot Vineyards at the Winemaker’s Table

Legacy Liquor Store has been hosting a series of complimentary wine tastings this year called The Winemaker’s Table. Visits by winery proprietors and winemaker’s have elevated the sit-down evening events far beyond the average tasting counter sniff and sip. Recently Legacy presented a highly-anticipated tasting of the portfolio from coveted Naramata Bench Pinot Noir producer Foxtrot Vineyards. Foxtrot is a family-owned and operated winery, so our guest host for the evening was Winemaker Gustav Allander, son of founders Torsten & Kicki. During the generous two-hour timeslot Gustav was able to detail all five of the wines we tasted from Foxtrot and second label Wapiti Cellars. 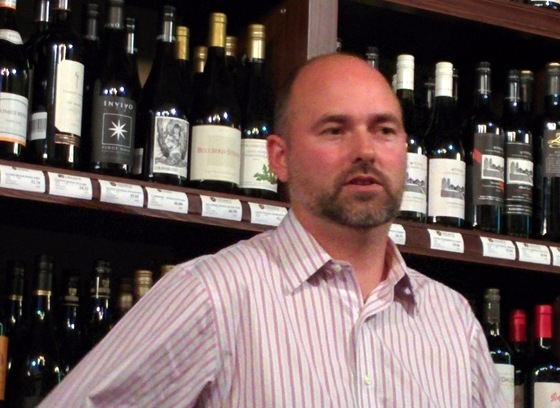 Before delving into the Chardonnay and Pinot Noir of Foxtrot we sampled from the Viognier Gustav and his winemaker wife Nadine produce under the Wapiti name. The brand (named after the Bench’s flourishing herd of non-native Elk) allows the Allanders to retain a strict Burgundian focus at Foxtrot but still experiment with other favoured grapes. The latest Viognier comes from the 2012 vintage, released this past February after 15 months in bottle following ten months in neutral oak. That extended bottle aging, and the initial malolactic fermentation, has yielded some secondary nuttiness on the lushly textured palate, complimenting the perfumed melon nose.

With only five wines in the entire two-brand portfolio the second and only other white is the Foxtrot Chardonnay: our sample came from the 2013 vintage and the newly sourced “Four Shadows Vineyard” at the south end of the Bench. For a few years Gustav worked with exceptional grapes from the nearby Coolshanagh Vineyard, but the owners of that celebrated terroir recently began producing their own wine. Fortunately the Four Shadows vineyard and Gustav’s deft treatment (e.g., whole cluster fermentation) have ensured Foxtrot continues to produce a very fine bottle of Chardonnay. The blend of three Dijon clones showed a superbly balanced flavour profile of lightly toasted apple pie aromas and a delicious juicy palate with a long, smooth finish. 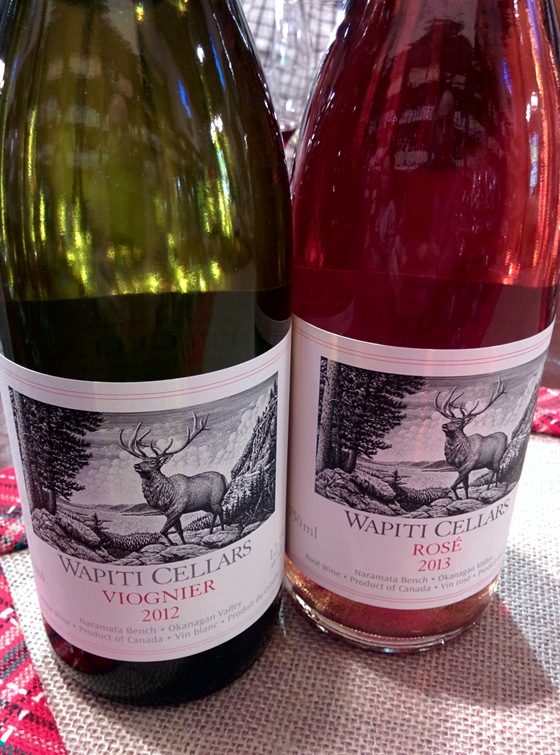 One more Wapiti wine currently exists in the form of a darkly coloured Pinot Noir Rosé; we tasted the first release, from the 2013 vintage. The blend of grapes from two Naramata vineyards was partly barrel fermented and aged (in neutral oak, for six months), contributing to the spicy flavour and hints of leather on the nose beyond the bright red fruit. You’d be forgiven for mistaking this wine for a pale varietal Pinot Noir rather than a Rosé, such is the colour and intensity. The dark colour comes from a press that included 24 hours on the skins, which extracted some light tannins as well, putting the dry wine solidly in the food-friendly category.

To conclude the tasting we had the very valuable opportunity to sample both vineyard-specific Pinot Noir from Foxtrot. Two glasses allowed a comparison of the 2012 vintage from the contracted Henricsson Vineyard and the estate Foxtrot Vineyard. Gustav produces both Pinot Noir in precisely the same fashion: 1/3 whole cluster fermentation and 18-20 months in French oak with no racking. The German/Swiss Pinot clones grown at Henricsson provided for a nicely perfumed cranberry nose and a clean, fresh palate with smooth cranberry and cherry flavours – it would make for an ideal holiday dinner companion. The slightly warmer site at Foxtrot is planted with own-rooted Dijon 115 clones, showing noticeably darker aromas and flavours of blackberry and black cherry that I enjoyed in particular. 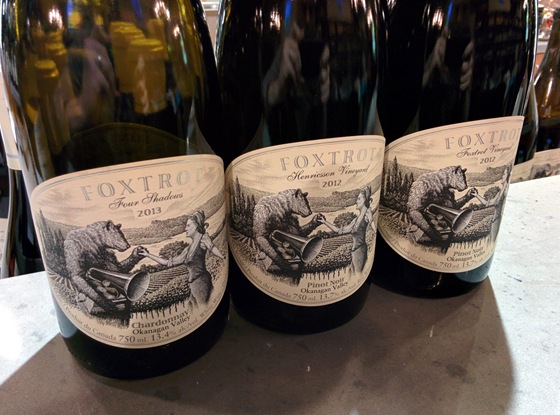 Although either Pinot Noir could age very well, both were drinking smoothly and surprisingly well at present. Foxtrot wines have consistently proved to be highly age-worthy. At the recent Cornucopia Festival in Whistler Gustav presented an extensive vertical tasting moderated by Sid Cross, who agreed that even the earliest 2005 vintage could still be held for future enjoyment. The two existing Pinot Noir may eventually be joined by a third, providing for even more similar tasting opportunities in the future. Gustav was happy to share with us news of the recent inaugural harvest from the estate’s South Block, which may become a vineyard designated wine in its own right. Fans would be wise to keep their eyes open for another champion wine by 2018.