The fortuitous arrival of two different wine club shipments provided for a full case of collectibles allotted to the cellar this month. Connecting directly with the wineries helped me acquire several rarities in short supply, combined with selections from the clubs of Painted Rock and Moon Curser. The 2013 reds are coming off the bottling line at Painted Rock; and from Moon Curser’s growing Wine Club I was fortunate to receive a pair of library wines, plus additional newly released reds. 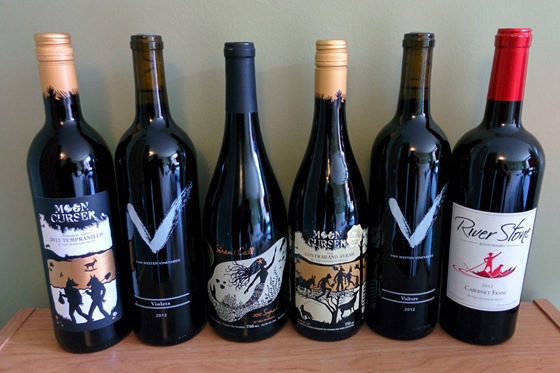 Moon Curser 2013 Tempranillo: Despite its local scarcity Tempranillo has been a facet of Chris Tolley’s portfolio since it was planted in 2004, long preceding more recent varieties such as Touriga Nacional or the Dolcetto he is about to harvest. I adored the 2012 tasted last summer, and have high hopes for this brand new release from another solid vintage, included in my latest Club shipment. It’s always a small lot wine – only 268 cases this year, from the home vineyard on Osoyoos’ East Bench. John Schreiner’s recent 93-point review praised the full body and long, spicy finish. Winery Direct $32

Van Westen 2012 Violeta Malbec: Last Christmas Rob Van Westen dropped by the BC Wine Appreciation Society Holiday Party and raffled off, among other things, a bottle of his first varietal Malbec. I’ve kept the wine in mind since then, awaiting formal release, and finally got my hands on some this month when Rob made a delivery run to Vancouver. Only 92 cases were produced, of a wine Rob describes as showing generous spiced berry notes and “orange-zest-infused chocolate” – a delicious-sounding drop from a top local talent. Winery Direct $30

Siren’s Call 2012 Syrah: Winemaker Mark Simpson recently set up shop in his BC Wine Studio at Hawk’s Vineyard in Okanagan Falls. A major honour was bestowed this summer when one of fourteen Lieutenant Governor’s Awards was presented for Mark’s Syrah, a bold wine sourced from the Similkameen Valley (the new 2013 comes from Osoyoos). A recent opportunity to taste both Syrah (and more) when Mark visited the BCWAS Summer Barbecue provided the opportunity to buy one of the last available bottles. Select Vancouver VQA wine stores may still have a little in stock. Winery Direct $25

Moon Curser 2012 Contraband Syrah: Also found in the newest Club six-pack was the winery’s latest reserve Syrah. This single-vineyard wine from the Osoyoos East Bench is the product of two individual blocks, one of which is used first for Moon Curser’s saignée-style Rosé; the remaining concentrated juice then contributes to the Contraband Syrah’s intensity. It is likely worthy of further aging to better integrate the fruit and oak – the winery suggests 3-7 years, a broad range. A modest 444 cases were produced from 2012, and it recently received a respectable silver medal at the National Wine Awards. Winery Direct $32

Van Westen 2012 Vulture Cabernet Franc: Several years ago Rob Van Westen produced a limited series of Cabernet Franc magnums he called “Vrankenstein” as a fundraising exercise for the BC Children’s Hospital. In 2009 he bottled a special sulphur-free varietal production run to yield 42 cases of well received “Vulture”. The Franc has been resurrected for 2012, albeit without the terrifying (for the winemaker) absence of sulphur, an important preservative. Rob managed to eke out 76 cases this time, with a floral and fruity expression said to posses characteristics as varied as wisteria, clove, plum, milk chocolate, and even pastry crust. Winery Direct $40

River Stone 2012 Cabernet Franc: The most unexpected find of the month, and likely of the summer! Ever since Oliver’s River Stone received a gold medal and critical acclaim for their Cabernet Franc in last year’s National Wine Awards I have sought it out, only to find myriad bottles of (also excellent) 2011 on store shelves. Meanwhile the 2013 has already sold out at the winery, let alone the mere 120 cases of 2012. With it still in the back of my mind, I finally hit pay dirt quite unexpectedly. Several years of additional aging could suffice, without impacting the juicy varietal character emphasized by the Awards’ judges, including Anthony Gismondi in his 89-point review. Viti Wine & Lager $36 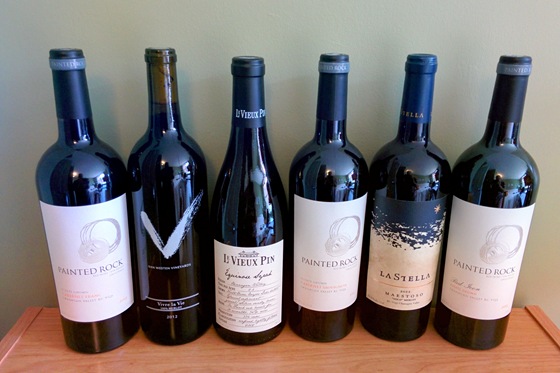 Painted Rock 2013 Cabernet Franc: My bi-annual delivery included a real gem this month, in the form of Painted Rock’s first new red wine since being founded. The 2013 vintage proved so superb that a small amount of Cabernet Franc was hung for an additional twenty days, until early November, to magnify complexity and intensity. Only 165 cases were produced, being offered to Wine Club members and selected restaurant clients first, and there is no guarantee it will remain an annual staple. A sample sent to WineAlign was tasted by several critics just recently: the 89-90 point reviews speak of its power, balance, length, and ageability. Proprietor John Skinner isn’t stopping at Cabernet Franc, and recently mused about bottling a varietal Petit Verdot from the 2015 vintage. Winery Direct $52

Van Westen 2012 Vivre la Vie Merlot: The third of this month’s newly released Van Westen reds is varietal Merlot. This rarity has only been made from four vintages, starting  with the superb 2007, and always in small quantities – 113 cases this year. The next most recent vintage (2010) remains in my cellar awaiting maturity, with a predicted availability date of January 2017. The excellent 2012 growing season facilitated an intense and rich wine that Rob suggests evokes Christmas pudding, stewed black cherry, and orange zest – seems like a bottle to pair with the holiday season in 2018. Winery Direct $35

Le Vieux Pin 2012 Équinoxe Syrah: Le Vieux Pin has carved out a very deserving niche as one of BC’s premium producers of Rhone-inspired wines. The stated goal for the top echelon Équinoxe Syrah is to balance the more delicate floral qualities of the “entry-level” Cuvée Violette with the spicy, meaty character of the middle-tier Cuvée Classique. Two vineyards, one off Osoyoos Lake and another north of Oliver, contributed to 334 cases that include 3.5% Viognier, aged for 19 months in one third new French oak. A very age-worthy new release, already garnering significant praise, e.g., WineAlign, Gismondi on Wine, Icon Wines. Winery Direct $90

Painted Rock 2013 Cabernet Sauvignon: The reds at Painted Rock are usually aged 18 months in French oak (with annually decreasing proportions of new oak now down to just 30%), hence bottling takes place in the summer for an autumn release. Wine Club members get early access, and the Cabernet Sauvignon is in particularly high demand each year, ever since that very first Lieutenant Governor’s Award for the inaugural 2007 vintage. A slightly smaller than usual production of just 392 cases from 2013 will lead to even greater rarity – restaurant clients snap up much of the annual yield. Winery Direct $40

LaStella 2012 Maestoso Merlot: The sister winery of Le Vieux Pin has selected Merlot as their champion, with Maestoso at the top of the pyramid. I’ve managed to collect every vintage since the first from 2006, and the addition of 2012 to my six-year vertical has finally put that original well-aged example on the chopping block. The newest release is one of particular pride for the winery, who report their relief at the return to warmer weather in 2012, and the resulting “extremely uniformly ripe and pristine grapes.” If I follow my established aging schedule it won’t see the light of day until 2021, at the upper end of Treve Ring’s suggestion in her 90-point review, but likely well within the wine’s capacity. Winery Direct $100

Painted Rock 2013 Red Icon: Past blends of Red Icon have thrown expectations out the window and discarded traditional components like Cabernet Sauvignon entirely, led with Malbec or Cabernet Franc in the largest proportions, or included Syrah when appropriate. This brand new release is a true Bordeaux style blend, but as usual the varieties come in a non-traditional order: 33% Merlot, 29% Cabernet Franc, 21% Petit Verdot, 12% Malbec, and (only) 5% Cabernet Sauvignon. Twelve hundred cases last year are down to 985 from 2013, and with plenty of maturity anticipated in the years to come now is the time to stock up for the future. Winery Direct $55