This month marked the first time my mother, sister, and I have been in the same place in four years. Because the three of us live along an arc nearly 7,600 km long (nearly one third the circumference of the Earth), we rarely find the opportunity to get together. With both my mother and sister visiting Vancouver we jumped on the opportunity to visit BC wine country together for the first time. I was able to book two nights mid-week in a beautiful beachfront villa at Watermark Resort, providing just enough time to swing by some favourite wineries in the South Okanagan. Of course, a longer stay would have been preferred – to explore some of this year’s newest wineries – but wine touring can get very expensive, very quickly! 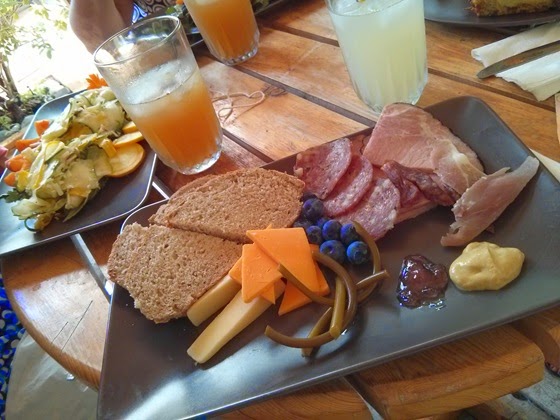 One of the best parts about visiting the South Okanagan is that you get to visit the Similkameen Valley on the way there and back! I’m a huge fan of both the natural beauty of Canada’s “Organic Fruit Capital” and of the delicious products that come out of it, grapes in particular. Setting off from Vancouver in the morning meant we arrived in the Similkameen just after noon, for a planned first stop at the Grist Mill & Gardens in Keremeos. Exciting news recently revealed that talented Chef Natasha Schooten has joined the Mill’s Tea Room after a successful tenure at Hester Creek’s popular Terrafina Restaurant. Talking with Chef Natasha during our visit I learned she has longed for a more authentic, local experience, making the Grist Mill a perfect fit: the gardens onsite provide many of the ingredients for the Tea Room, and the Mill itself provides a range of flour for baked goods. Sitting outside and soaking in the heat we enjoyed dishes like Zero-Mile Salad, Crustless Quiche, and my own Ploughman’s Lunch with cured meats and BC cheeses. After a tour of Western Canada’s only working, original flour mill, we even left with jars of Pickled Garlic Scapes, and local Similkameen Honey. 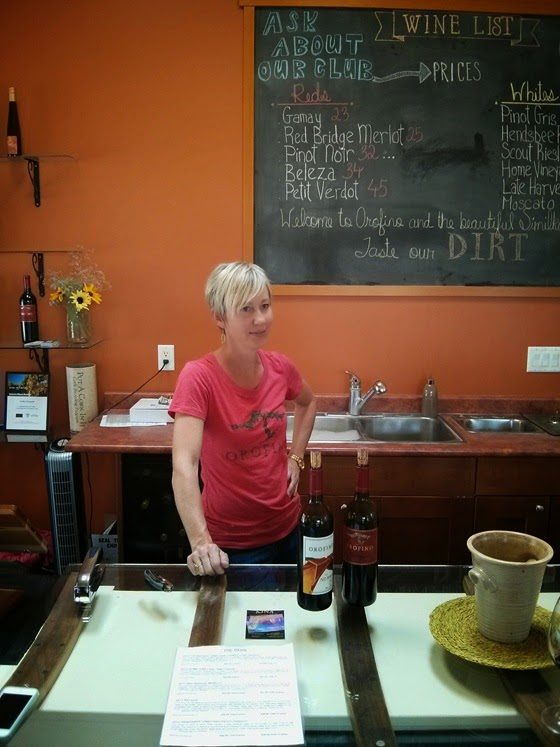 Full of Similkameen food we set off after lunch to seek out some Similkameen wine to keep it company. We happily trundled along to nearby Cawston, home of Orofino Vineyards, ticking off yet another enjoyable visit to one of my favourite wineries. Proprietor Virginia Weber was stylishly tending bar in the Tasting Room, where we enjoyed the newly released 2013 Moscato Frizzante, released just in time for me to restock after recently finishing my last bottle of 2012. I made sure to leave with a few bottles of the superb 2013 Celentano Vineyard Gamay as well, a flavourful expression of fresh berry basket that will sell out quickly this summer. The 120 cases produced will vanish even faster given the recent revelation that the wine was awarded a prized Platinum Medal at the WineAlign 2014 National Wine Awards. Only three other BC red wines – all Syrah – achieved Platinum status, making this exciting accomplishment particularly noteworthy. 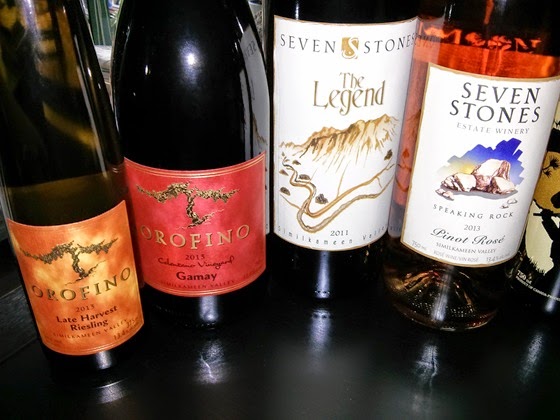 A very pleasant surprise joining the Moscato and Gamay came in the form of 2013 Late Harvest Riesling. The bountiful 2013 harvest let the Webers leave some fruit hanging in the nearby Hendsbee Vineyard, where it was eventually harvested to yield a wine with 54 grams/L of residual sugar (versus a mere 4 grams in the racy table wine). Stone fruit flavours with a tropical bent and clean, fresh acidity have made for something like a mellow icewine, with an attractive golden raisin finish. Were I not a member of Orofino’s “Collector’s Club” I would have departed with many more bottles of reds like 2011 Merlot, Syrah, Cabernet Sauvignon, and the Beleza red blend, or the new 2012 Home Vineyard Pinot Noir. Fortunately I have already received or will soon receive each of those wines, thus keeping my budget for this particular trip under control. 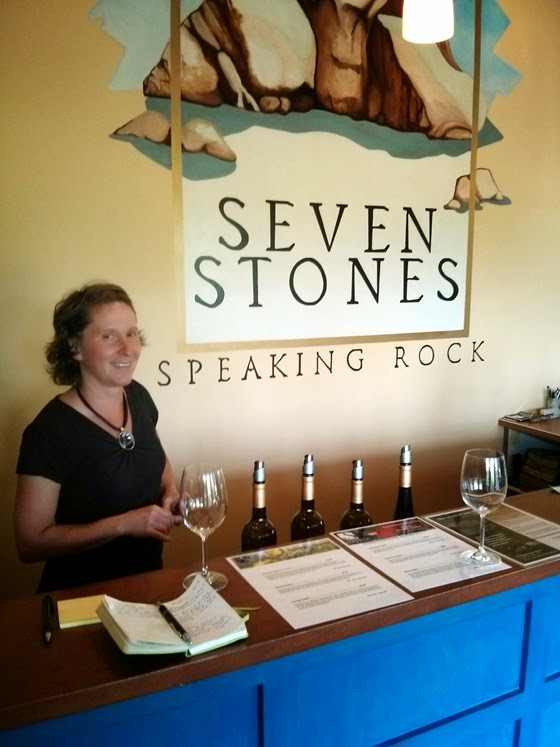 As we left Cawston and travelled further south and east along Highway 3 we pulled into Seven Stones, where Proprietor George Hanson produces a range of excellent wines, focusing on rich reds. While Tasting Room Manager Angelique set up the stemware, the three ladies with me sought out some of the local artisan jewellery on display throughout the wine shop. We soon had the chance to sample the new 2013 Pinot Rosé, showing a pale salmon colour after a thirty-hour soak. Despite George producing a varietal Pinot Noir, he doesn’t bleed off any must for the Rosé – it is in fact a dedicated wine. The light colour led into a delicate nose and palate, where sweet grapefruit flavours impressed us.

A bevy of other wines followed, beginning with the 2010 Chardonnay, retaining a lot of delicious fruit in addition to some popcorn character. The nearly sold out 2009 Pinot Noir – recent champion at the Similkameen BBQ King Competition – showed off strawberry aromas and a spicy dark fruit palate with hints of nutmeg. The 2011 Cabernet Franc provided bright raspberry fruit and a long, lip-smacking finish, while the 2009 Meritage exhibited rich stewed fruit, brown sugar, and hints of olives in a full-bodied blend of primarily Merlot and Cabernet Sauvignon. With George’s varietal Cabernets (Franc & Sauvignon), Merlot, and Meritage already awaiting me at home I was more focused on the bottle of 2011 “The Legend” I spotted in the corner – one of only four remaining I was soon told! This small lot reserve Meritage comes from a mere handful of barrels, and I’ve only managed to acquire one previous vintage (2010). I’m hopeful that adding the 2011 marks the beginning of a vertical collection, but with just 100 cases produced each vintage I’ll need to pay close attention to George’s newsletters for each subsequent release. 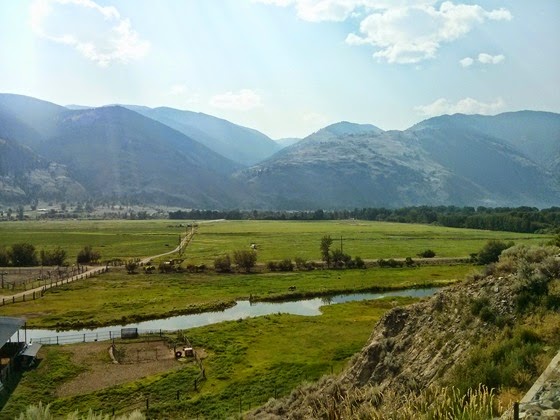 In Osoyoos we had just enough time before check-in to stop at Moon Curser, where several new wines awaited, continuing Chris & Beata Tolley’s tradition of ambitious experimentation. While the Tolleys weren’t available, we were graciously hosted by Chris’ father Monty in the Tasting Room as we sniffed and sipped. Chris recently planted the ancient Italian variety Arneis amongst some experimental Nebbiolo as a sacrificial grape to attract birds. He ended up with 141 cases of dry, crisp, pear-flavoured wine and I was pleased to snag some to share back in Vancouver. The Roussanne-heavy 2013 “Afraid of the Dark” Rhone blend gathered fans amongst our party with flavours of candied pineapple, apricot, and citrus – the rich fruit presents a sweeter finish than likely exists. Next, a Saignée-style 2013 Syrah Rosé made itself known with strawberry cotton candy, sour cherry, rhubarb, and spice on the dry finish.

Moon Curser produces a great many red wines, often in small quantities. We tried out some of the remaining 2011 wines, as the 2012 vintage release approaches in the fall, including a classic earthy cherry Pinot Noir, smooth berry Merlot, spiced meat Syrah, and the fresh, easy-drinking Border Vines blend. The 2011 “Dead of Night” is a newer release, an even split between Syrah and Tannat that conjured up blueberries on toast, with vanilla notes and mouth-filling textures. From 2012 we were excited to sample a very rare Carménère (only the second one in Canada after that of nearby Black Hills) and the newest vintage of Tempranillo. The young Carménère – Best of Varietal (Red Single Varieties Other) winner at this spring’s Okanagan Wine Festival – surprised me with soft, plush textures, plus notes of burnt sugar and red licorice. The Tempranillo was an immediate favourite, putting us directly in the mindset of fresh fruit pie: vanilla, toasty cherries, and a creamy texture garnered notable praise. All told we left with everything from Arneis to Tannat – probably the most unique collection of high quality wines coming out of any Tasting Room in Canada. 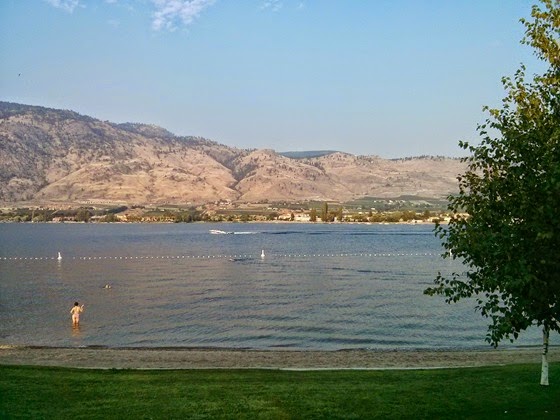 We checked into the Watermark Resort with plenty of daylight hours remaining, giving time for some refreshing dips in the nearby lake. I enjoyed a cool beer after several hours of driving and responsible wine tasting while we planned a relaxing tapas-style dinner in our suite. I made sure to let everyone know my desired departure time in the morning before we turned in, as I needed to ensure sufficient time to show off more superb BC wineries!