There are a growing number of wineries at which one can enjoy an excellent meal in the southern Okanagan, we even could have stayed at Road 13 after our morning visit to enjoy some cheese and charcuterie trays in the Executive Lounge. However, we couldn’t pass up a chance to visit Hester Creek and say hello to our friend Sarah Lefebvre, the winery’s Communications Manager. In addition to the large winery itself, Hester Creek is the home of a delightful Italian bistro, Terrafina Restaurant, at which I’ve enjoyed many meals in the past, thanks in large part to their authentic stone pizza oven. 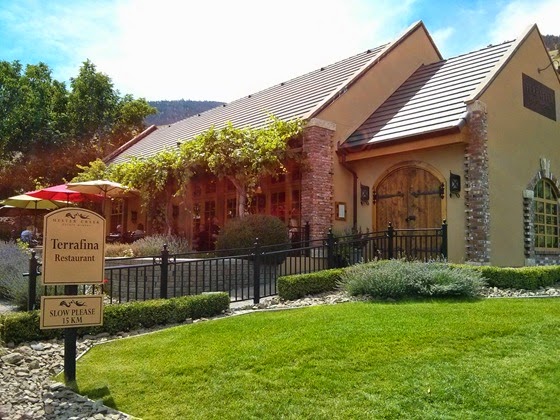 After lugging in most of our wine from the car, to keep it safe from the blazing sun, we shared in fresh salads and crispy, thin-crust pizza – both Margherita and my favourite, Potato & Truffle. I couldn’t resist the Pan Seared Scallops either, with pea shoots and a bacon vinaigrette over quinoa. The restaurant was even more than capable of producing a tasty gluten free pizza crust for my sister. Before walking up to the Tasting Room we stored our wine in the restaurant’s own cellar, very graciously opened up to us for safekeeping of our precious cargo.

In the expansive Hester Creek Tasting Room and Gift Shop we spent some time admiring the array of gift items for sale, and selecting a few for friends back home. Sarah ushered us into a nearby barrel room for a generous private tasting and discussion, beginning with the winery’s exclusive Trebbiano. The 2013 vintage of this wine, unique in Canada, continues to induce smiles with a clean floral, citrus nose and a creamy texture resulting from some residual sugar, well balanced with natural acidity. The 2013 Cabernet Franc Rosé (another relative rarity) is similarly off-dry, and we enjoyed the strawberry rhubarb flavours and earthy undertones. Despite the summer heat outside we delved into a serious of increasingly full-bodied red wines, including the toasty chorizo and plum profile of 2012 Cabernet Merlot, and the somewhat darker, richer, stewed strawberry 2012 Character Red, a blend of Merlot, Syrah, Malbec, and Petit Verdot. Reserve reds include the 2011 Cabernet Franc, starting to integrate the generous oak treatment and show off a pleasingly fruity nose, with leather and smoked sausage character to follow. Earlier this summer the winery won another Lieutenant Governor’s Award for their 2011 Reserve Merlot, and we relished trying the successor 2012 vintage: the rich palate showed toasty sausage notes and ripe fruit, with candied blueberries on the finish. The winery’s top red is “The Judge”, a full-bodied, small lot red blend first released from the 2007 vintage. A rare sample of the youthful, recently released 2011 showed sawdust, dark fruit, and a range of savoury elements, from toasted almonds to garden vegetables and black pepper. A long, relatively smooth finish surprised me given the tannins I was expecting. As with many of BC’s top red blends, I keep a running vertical of The Judge, and having recently acquired the 2011, I’ll be opening my bottle of 2007 soon – I look forward to my first real investigation of how it ages. 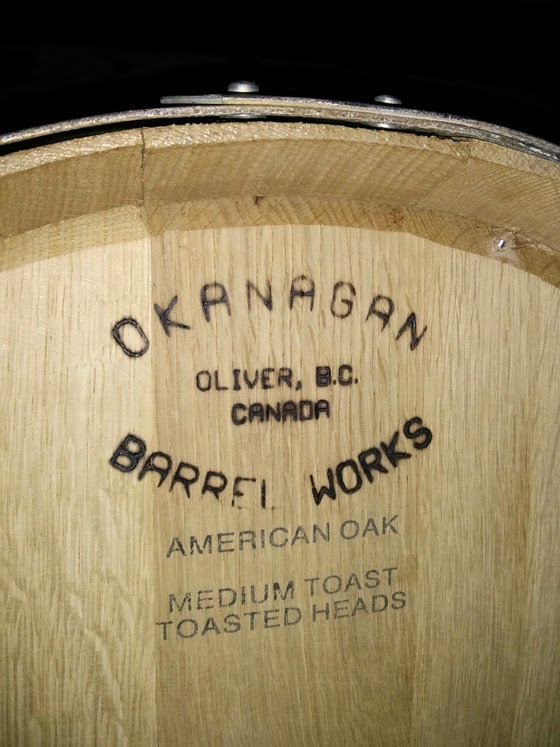 Hester Creek produces a superb-value Late Harvest Pinot Blanc, which capped off our tasting to great effect. Tropical blossoms and fresh pineapple aromas, alongside orchard fruit flavours of pear and apricot renewed and refreshed our palates before we parted ways with many thanks to Sarah. Our departure from the Okanagan Valley was imminent, with one final stop just up the road at Tinhorn Creek. There I picked up my latest allocation from Tinhorn’s “Crush Club”, saving some money on shipping and giving me a chance to say hello to Club Coordinator Terry Meyer-Stone. I had been scheduled to receive three bottles each of 2010 Oldfield Series Pinot Noir and 2011 Oldfield Series Syrah, but with a daunting amount of red wine in my cellar already, I had elected on two of each, plus a couple 2013 Oldfield Series Rosé. Sandra Oldfield’s crisp and dry Cabernet Franc Rosé is always a versatile wine that sells with rapidity exclusively on location. I expect good things from the reds as well, coming from a long line of finely tuned productions, bottle-aged to ensure approachability upon release. Only 150 cases of 2011 Syrah were produced, and given the allotments and early opportunities for Crush Club members, very little will remain upon public release on October first! 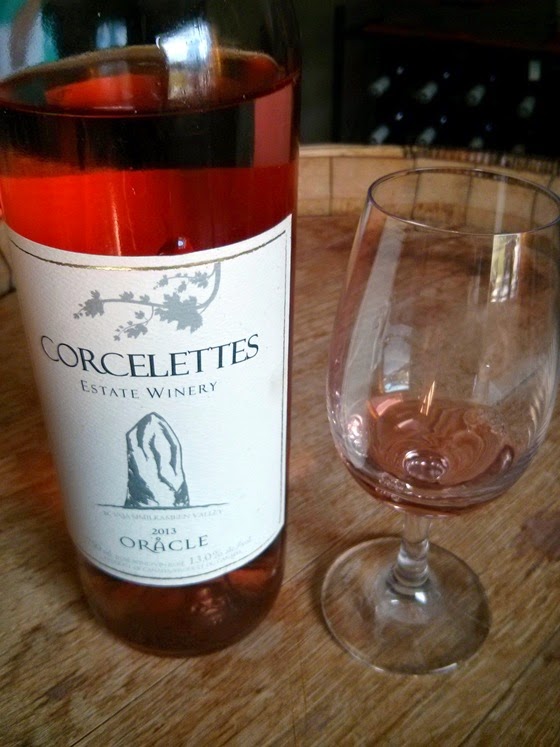 We crested the mountains and entered the long Similkameen valley to the east of the Okanagan by mid-afternoon, slightly behind schedule, but with sufficient time for one final winery visit. On our way to Osoyoos two days earlier we had attempted to call on Clos du Soleil, just down the road from our lunch venue at the Grist Mill. However, as it turned out, this superb winery is closed specifically on Tuesdays, leaving us no choice but to return later in the week. Having enjoyed the wines of Clos du Soleil with a particularly growing fondness recently, I wasn’t one to pass up a chance to finally visit the winery in person. We were greeted with enthusiasm by Tasting Room Manager Jesce Walker, and Operations Manager Charlie Baessler, who provided for a double-dip bonus with samples from his family’s nearby Corcelettes Winery.

With Jesce waiting patiently, Clos du Soleil in hand, Charlie introduced us to one of the Similkameen Valley’s newest wineries, and four wines he produced as Winemaker for Corcelettes. A rare Zweigelt Rose called “Oracle” led the way: a very short five-hour soak on the skins of this Austrian variety has yielded dry, delicate strawberry rhubarb flavours. The 2013 “Trivium” blend of Chasselas (50%), Gewürztraminer (36%) and Pinot Gris (14%) showed off a fresh, creamy palate of lip-smacking lemon curd. Single varietal 2013 Gewurztraminer presented itself equally creamy due to 13.5% alcohol, but a well-managed 6.5 grams/L of sugar has ensured bright floral and stonefruit character. Charlie’s lone red so far (while preparing a 2013 varietal Syrah for release) is the 2012 “Menhir”, a blend of Cabernet Sauvignon and Syrah, named after the imposing stone depicted on the winery’s labels. Fruit forward, but still possessing dusty, grippy tannins and leathery aromas, the Menhir was first produced from the 2011 vintage (and released last year alongside 2012 Trivium). I think doubling their wines from two to four in the first year (and approaching sold out status for many) should please the Baessler family, and I look forward to visiting in the future and seeing another devoted Similkameen winery take shape! 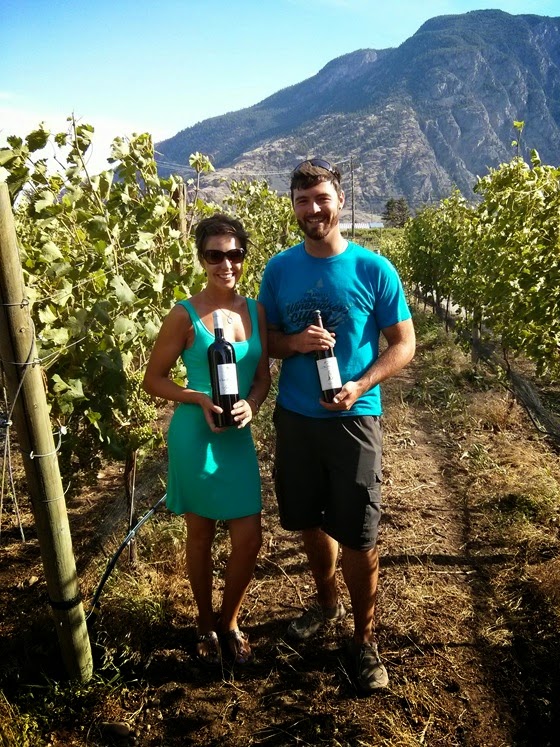 With plenty of driving in my future I passed on sampling most of the Clos du Soleil portfolio, having recently enjoyed significant familiarity via both a comprehensive tasting with the BC Wine Appreciation Society, and a sumptuous winemaker’s dinner the very next evening! However, I encouraged my family to dive in, particularly when it came to the vibrant 2013 Fumé Blanc, delightfully aromatic 2013 (Cabernet Sauvignon) Rosé, and the surprisingly approachable new 2012 Célestiale red blend. I did not, however, decline the brand new 2012 Grower’s Series Merlot, from which a mere 125 cases of limited single vineyard wine were just released. Reviewing my notes I am exasperated with my frugality in bringing home a solitary bottle, for the rich fruit jam flavours made quite an impression, following through with equally delicious notes of mocha and caramel. At least my single bottle was kept company on the way home with a very exciting full-sized “Saturn” – the rich, late harvest Sauvignon Blanc normally distributed in 375ml bottles. This honeyed nectar is a very special and highly desirable indulgence, and consumer demand necessitated larger bottles given how quickly the half-sized vessels empty. The 750ml bottles are exclusive to the winery’s tasting room, with so few produced precise figures weren’t even available – needless to say there is one fewer going forward! 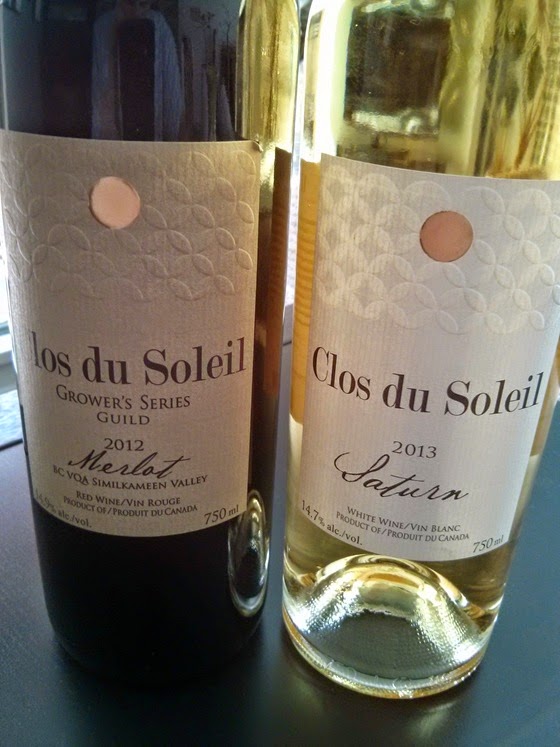 We arrived home with a mere four-plus cases of wine among us all, actually a record low for me, but with a burgeoning cellar at home I’m having to minimize new additions. Although I took advantage of the trip to acquire some special rarities, the biggest benefit was the chance to show my family the beautiful region and wonderful wineries with which I’m so enamoured. The generous hospitality we received and the spectacular wines, and passionate people behind them, made it obvious why I keep coming back – this will be another trip yielding many delightful memories.