Due to some perfect planning, the past week included two exciting events featuring the Similkameen Valley wines of Clos du Soleil. On Tuesday the BC Wine Appreciation Society hosted a sit-down tasting with a couple of the winery’s Proprietors – founder Spencer Massie and new Operations Manager/Co-Winemaker Michael Clark – joined by Winemaker Ann Sperling. The very next day, the same team was present at the Pacific Institute of Culinary Arts for a Winemaker’s Dinner organized by the winery’s hard-working Marketing & Events Coordinator Valerie Stride. Knowing about these events well in advance I made sure to clear my schedule so I could be present at both. I joined three dozen fellow BCWAS members Tuesday evening to sample a broad range of Clos du Soleil wines, covering several different vintages, varietals, and styles. While Ann Sperling and Michael Clark provided commentary from the head table, I was fortunate enough to sit with Spencer and Valerie and share in their enthusiasm. We got off to a rousing start by exploring the 2006 “White”, a nearly straight Sauvignon Blanc with just a touch of Semillon. The Estate vineyard was established on Keremeos’ Upper Bench that year, and for their first release the winery sourced fruit from an Osoyoos grower so that consulting winemaker Lawrence Herder could produce just 75 cases of White (alongside 92 cases of “Red”). The golden straw colour certainly signified seniority, but it had retained complex elements of waxed honey, spiced apple, almond skin, and tropical fruit, with very slight vinegar character. Overall it has aged wonderfully; in fact Ann suggested that even another five years of life is possible, given the wine’s vibrancy.

The “White” has evolved into the “Capella” Sauvignon/Semillon currently produced, and we next had the chance to taste from the 220 cases of the 2012 vintage recently released. That same Osoyoos grower is still contributing, in combination with the Keremeos Estate vineyard, and Semillon from a Naramata grower. As Ann explained, the Capella is a serious white wine, structured for complexity and good ageability. The blend of approximately 90% Sauvignon Blanc and 10% Semillon is fermented and aged in stainless steel, but spends time on the lees, lending a creaminess to the palate. Additional tropical elements and crisp linen were detectable, and it was wonderfully fresh and clean overall, but I actually found the wine so well integrated it was challenging to extract specific flavours.

With our mini-vertical complete we moved on to the brand new 2013 wines: Fumé Blanc, Pinot Blanc, and Rosé. The Fumé is a fascinating wine, and a favourite of mine for its superb balance of fruit character and oak integration. With 88% Sauvignon Blanc and 12% Semillon, the blend is similar to the Capella, although the grapes are picked a few days earlier, and then fermented in oak puncheons. I greatly enjoyed the vanilla, orchard fruit, and tropical aromas, plus mouth-watering flavours of grapefruit, pineapple, and papaya. The Pinot Blanc comes from Clos du Soleil’s “Growers Series”, in which they split the wine’s profits 50/50 with the grower. The 320 cases from Keremeos’ Middle Bench Vineyard should sell quickly (the first vintage, in 2010, sold out in 9 days): wildflowers and peaches strongly expressed themselves, and Ann emphasized her satisfaction with the wines’ varietal character. 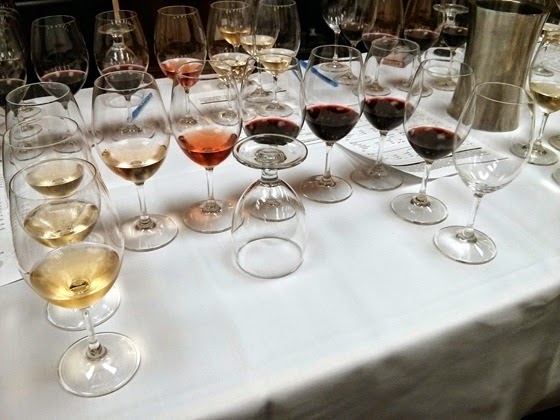 Before moving on to a few red wines, including another mini-vertical, we sampled from the winery’s unique Cabernet Sauvignon Rosé. While most of Clos du Soleil’s fruit comes from the Similkameen Valley, the Cabernet is sourced from a grower in Osoyoos, where it thrives. While we sniffed the wine’s berry, cotton candy aromas, Ann provided captivating commentary about Rosé winemaking. After making influential Cabernet Franc Rosé in the 1990’s, she simply couldn’t go back to the lighter Pinot Noir and Gamay most commonly utilized. Asserting that Cabernet Sauvignon is honestly an aromatic grape, she described the two “windows” in the grape’s development. The “fresh window” is from whence the majority of the harvest is obtained, to retain the crisp aromatics necessary for Rosé; a much smaller proportion from the “ripe window” is included for a touch of depth. With just 5 grams per liter of residual sugar, it is ideally balanced, with flavours of vanilla, strawberries, and maraschino cherries – truly an ice cream sundae in a glass!

Two 2011 reds were next on the docket, the first another varietal wine from the Growers Series: the “Makepeace” Merlot came from a very hot, sloping site in Cawston. Fewer than 100 cases were produced of this little gem, and it is already sold out, but 125 cases of the newly released 2012 “Guild” Merlot were just released. I smelled lots of young leather on the nose, followed by generous fresh, red berry fruit and cocoa hints. Leather followed on the palate, with no green character on the bright fruit and youthful tannins – it should age quite well under screwcap. The 2011 “Celestiale” came next, in a natural progression as we moved to bigger blends: 250 cases of this entry-level ($25) red consist of 44% Merlot, 40% Cabernet Sauvignon, 10% Cabernet Franc, and 3% each of Petit Verdot and Malbec. The wine is largely gone from store shelves by now, as the 2012 vintage is being released shortly. I found the blueberries and cream palate quite tasty, with hints of leather, tobacco, and savoury elements rounding out the flavour profile.

Our final two red wines comprised a reverse mini-vertical of the winery’s “Signature” red blend, starting with the current 2011 release (44% Merlot, 23% Cabernet Sauvignon, 22% Cabernet Franc, 6% Malbec, 5% Petit Verdot), followed by the 2008 (52% Merlot, 26% Cabernet Sauvignon, 13% Cabernet Franc, 9% Malbec). Only about 250 cases of 2011 Signature were produced, but Spencer shared the good news that 2012 saw greater numbers. The larger 2012 production run was done specifically to parcel out the release over two years, thus adding an additional year of bottle age to all future releases – an exciting prospect! The multi-layered nose and intensely flavoured palate provided plenty of stimulation, with elements of toasty licorice, dark fruit and olive notes, plus youthful tannins and acidity to yield a long life. The older 2008, the first vintage to take the “Signature” name, was showing only moderate age, and starting to take on some brick colouring. A complex mix of fruit, leather, and a burnt sugar/caramel finish rounded out the wine quite well. I tasted the marvellous 2006 only several months ago, and expect the 2008 to continue aging similarly well for years to come. 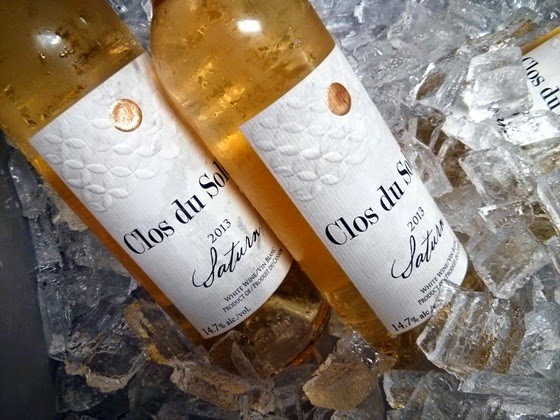 With the table wines sitting delightfully, deliciously well, we had one final treat freshly poured into the final glass: the brand new 2013 “Saturn” put smiles on everyone’s faces in short order. Saturn is Clos du Soleil’s homage to Sauternes, a late harvest Sauvignon Blanc, occasionally Botrytis-affected, often partially frozen before harvest. Fans such as myself have been waiting patiently for the new Saturn, as there was no 2012 release – apparently the grapes simply died on the vines mysteriously that year, falling to the ground lifelessly before harvest. The 2013 was harvested at the end of November, under challenging conditions that Michael suggested “nearly killed me.” There is virtually no Botrytis, but the enchanting wine suffers not. I couldn’t get over the bonanza of tropical and stone fruit – peaches and apricots in particular, with perfect viscosity and a wonderfully fresh, clean, honeyed finish. Approximately 2,000 liters were produced, and Spencer teased us with mention of full-sized 750ml bottles available exclusively at the winery – plan your visit soon!