This year’s record-breaking weather meant the recent BC Wine Appreciation Society Bus Tour ended up smack dab in the middle of harvest! Despite finding themselves in the midst of an accelerating schedule all the winery proprietors and winemakers who committed to meeting our tour group were able to follow through. We also had the rare opportunity to view the winemaking process up close and personal as we stepped over hoses and made way for forklifts. While the settings we visited were a bit more hectic than anticipated, sampling fresh, sweet grape must from tanks more than made up for the disruptions! 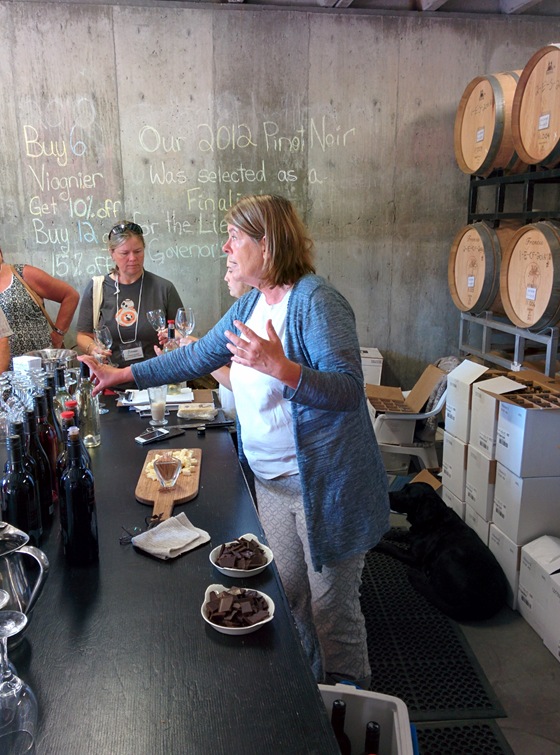 Our first stop on Saturday morning placed us at Serendipity Winery on the northern Naramata Bench. In her rustic tasting room, Proprietor Judy Kingston poured samples of nearly every wine she produces: “patio pounder” aromatic White Lie 2011 led into the traditional grassy 2014 Sauvignon Blanc and the serious 2012 Viognier, a match made for coconut shrimp. (Judy’s culinary background ensures food pairing opportunities are the foremost focus at Serendipity.) A 2013 Pinot Grigio was suggested as companion for spicy foods, while the cranberry and pomegranate flavours in 2014 Rosé demand turkey and vegetables. Reds on hand included the full-bodied 2012 Pinot Noir, 2010 Devil’s Advocate (70% Merlot and 30% Syrah), the youthful and bright 2010 Serenata Bordeaux blend, and even newly released, delicious 2011 Cabernet Franc and 2011 Syrah. 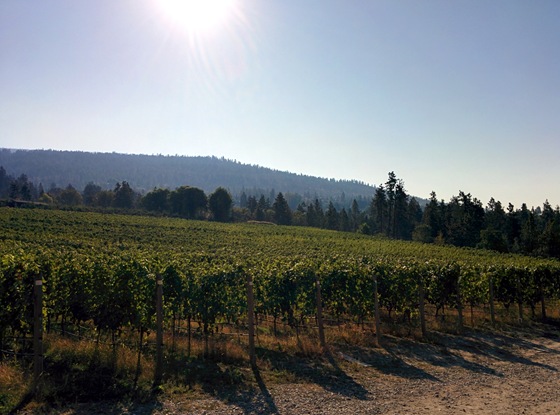 In the ten-acre vineyard, hand-planted by Judy herself in 2005, her daughter Katie puts a biology degree to good use with creative pest management choices. Distracting voracious cut-worms with vineyard trimmings is one way to reduce unnecessary pesticide exposure, and Katie’s most recent compost project is actually yielding tax credits – contingent on a well-written formal report to government. The winery facilities are being reorganized and well managed by Winemaker Bradley Cooper since he joined the team last year. It’s where he also produces his own line of Pinot Noir under the Black Cloud label, with Judy’s blessing. Behind the enormous wooden door, Brad poured tank samples of 2015 Sauvignon Blanc and revealed Katie’s pet project – the upcoming 2014 Sparkling Chardonnay, still resting en tirage. 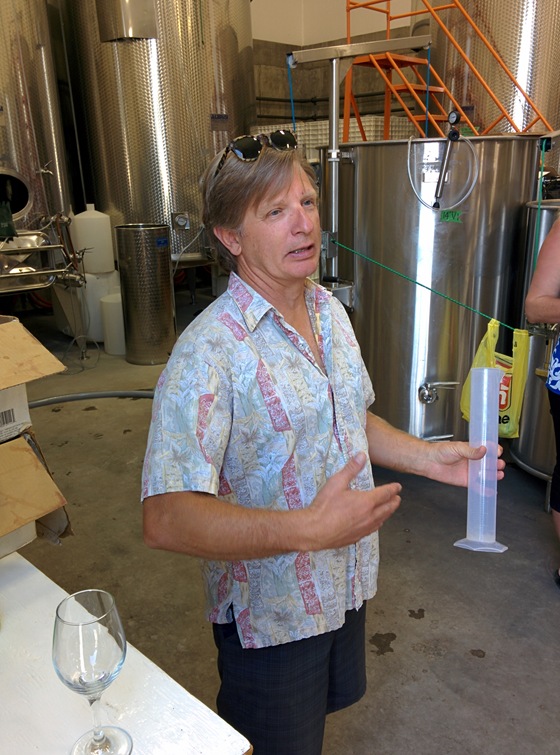 With everyone stocked up on Serendipity’s finely crafted wines we trundled on down the road to Hillside Winery & Bistro, where an early lunch awaited us. As we seated ourselves in a private dining area, Bistro Manager Lisa Henderson introduced Winemaker Kathy Malone. The perfect welcome to Hillside came in the form of 2014 Muscat Ottonel, their most popular wine, sourced from estate vines planted in 1984 when Hillside was first established. The complex profile from 30-year-old vines facilitated immediate refreshment from the 32-degree sunshine outside; Kathy was sure to mention the fresh floral aromas best labelled as Baby’s Breath. 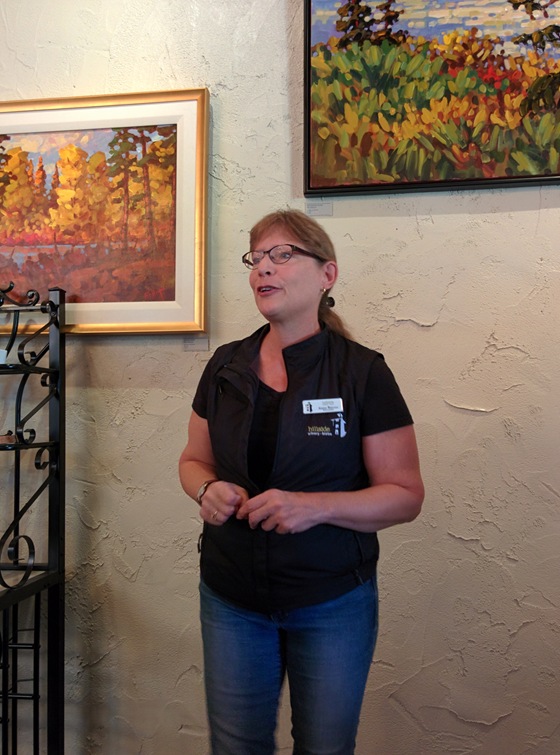 Lunch began with a creative Baby Kale Caesar Salad: those who held on to their Muscat would have found an ideal pairing, but the follow-up 2014 Gewürztraminer provided a relatively dry, balanced approach to fruit and floral character. Between courses the intense and earthy 2011 Old Vines Gamay Noir showed off more of Hillside’s original vineyard achievements. Keeping our palates entertained was rich and supple Reserve Pinot Gris 2014 with Seafood Cioppino or bright and spicy 2012 Syrah with Wild Mushroom Pappardelle Pasta. A special treat as we finished came in the form of freshly pressed Muscat juice, hand-harvested from right outside by Kathy herself while we dined – talk about 0-mile eating! 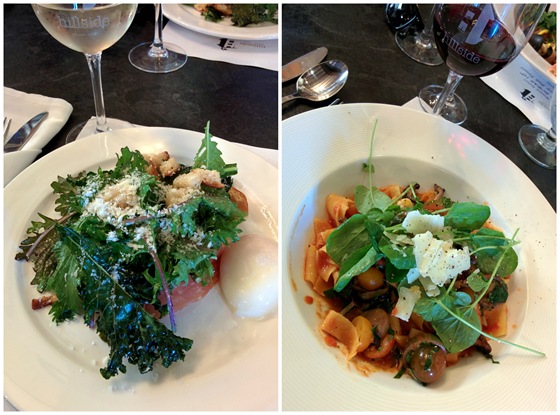 A visit to Hillside’s tasting room after lunch saw me discover the rare Port-style “Soirée”, a nicely balanced solera-style multi-grape blend that became one of my few unplanned impulse purchases. We soon made a quick jaunt up the road to Howling Bluff Estate Winery to experience Luke Smith’s ode to Pinot Noir. With no room inside the tasting room (formerly his eldest child’s bedroom), Luke held court on the terrace and passed around his most recent white wines: 2014 Sauvignon Blanc, Semillon, and the excellent Sauvignon-Semillon blend. Despite coming directly from lunch we hung on every word of Luke’s inspired food pairings, from Dungeness Crab in Black Bean Sauce to Jalapeño-Serrano Chili Ceviche. 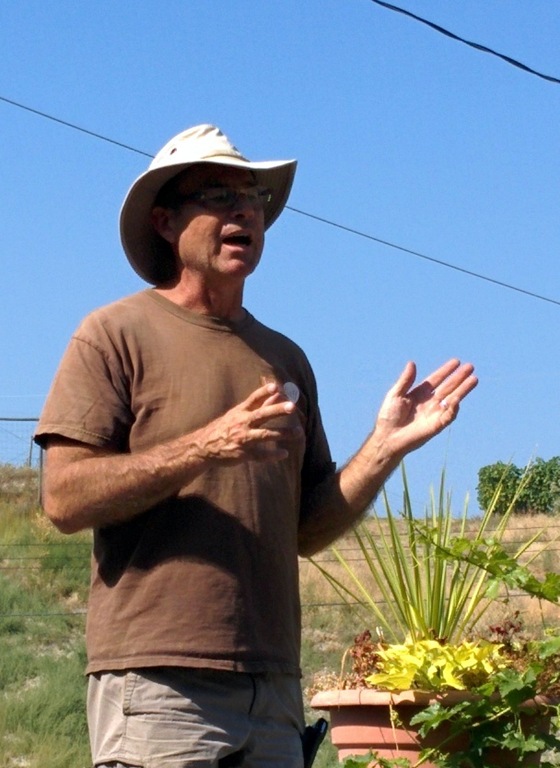 Having sufficiently loosened us up Luke presented an extremely generous and awe-inspiring seven-year vertical of his award-winning Pinot Noir. Not only has Howling Bluff’s “Summa Quies” Pinot Noir brought home a bevy of medals and two Lieutenant Governor’s Awards, but it was the only variety other than Syrah to ever be named Red Wine of the Year from the Canadian Wine Awards. Starting with the first vintage, we inhaled the gorgeous aromas of 2006, Luke’s “sheer, dumb luck” success from two-year-old vines. All the way through to the current 2012 vintage we sniffed and sipped from some relatively youthful bottles, while Luke provided honest criticism of his work, when it could be found. The newest release just brought home a Silver medal from the Decanter Awards, for a wine Luke feels is “getting back to basics” and comparing favourably to 2006. 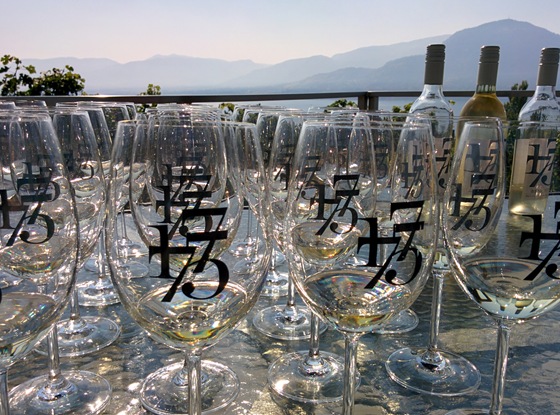 Joyously burdened with more prudent purchases, we made for Bench 1775 Winery to conclude the first day of touring. General Manager, Viticulturist, and Winemaker Valeria Tait joined us on the well-appointed deck to provide samples of several of her wines, alongside lavish platters of local cheese and charcuterie. We tried several of the table wines from Bench 1775’s extensive portfolio; quenching our thirst under the mid-afternoon sun with 2014 vintages of gooseberry and grapefruit Sauvignon Blanc, crisp “Glow” Malbec Rosé, and the lip-smacking “Chill” white blend. The “Groove” 2013 red blend was also well suited to the warm weather, an easy-drinking combination of Malbec, Merlot, Cabernet Franc, and Syrah served cool; followed by fine 2013 Pinot Noir and hearty 2013 Merlot. 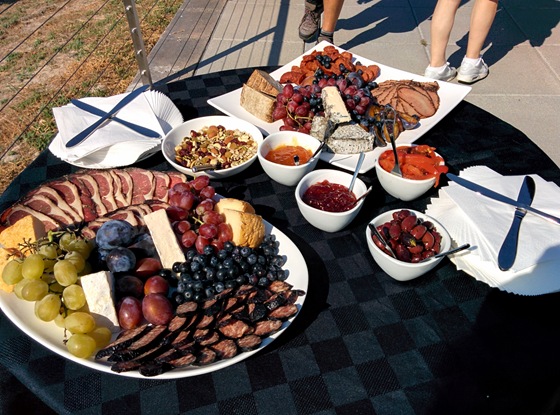