A weekend trip to Penticton for the annual BC Wine Appreciation Society Bus Tour not only provided for invaluable winery visits, but the opportunity to collect various wine club orders in person. While most wineries are aggressively courting customers with low or no cost shipping, I couldn’t pass up the chance to visit my favourites while saving a few dollars at the same time! I collected three club orders over the course of my trip, and another arrived shortly after my return home – via the newest wine country darling, ATS Healthcare courier service (with climate-controlled trucks). 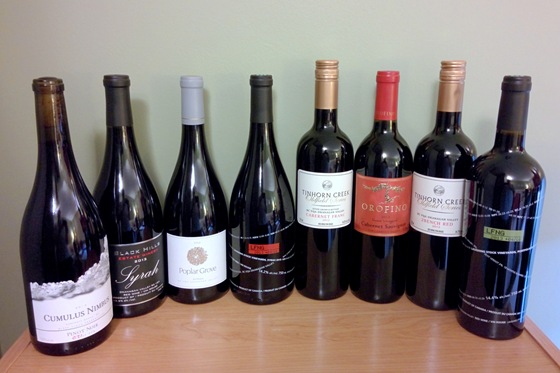 Black Cloud 2013 Cumulus Nimbus Pinot Noir: Winemaker Bradley Cooper (formerly of Township 7, now Serendipity) has slowly developed his own Pinot Noir brand over the past few years. Alongside his wife Audralee the pair have grown Black Cloud into a focused set of four wines at present (including Rosé), with the newly released Cumulus Nimbus at the proud pinnacle. After six vintages one special barrel was finally felt to be deserving of the top moniker, with each of 275 bottles hand numbered and signed. I first tasted the wine in late February, and then again this month during a visit to Serendipity with the BCWAS. The selected clusters spent fourteen months in French oak to yield a sumptuous and smooth wine that should evolve superbly throughout the decade of cellar time that Brad predicts. Winery Direct $45

Poplar Grove 2012 Syrah: The new Syrah was included in my very first Poplar Grove Wine Club selection, which the winery gracefully held for me to pick up since July. In concert with the summer release the wine took home a Gold medal at the National Wine Awards, one of a dozen for BC Syrah! Poplar Grove reports hand-sorting clusters from their two Osoyoos vineyards, destemming, and then berry-sorting to ensure perfection! Crushed and co-fermented with 4% Viognier the wine spent 18 months in (30% new) French oak, and then further developed for just as long as per Poplar Grove’s admirable bottle aging program. John Schreiner’s 91-point review praises the generous fruit flavours and rich texture, and is sure to mention the winery’s construal of Syrah’s “sultry expression” in the Okanagan. Winery Direct $35

Laughing Stock 2013 Syrah: Yet another one of BC’s medal-worthy Syrah, Laughing Stock was honoured with a prestigious Platinum medal at the 2014 Nationals, but had to settle for ‘mere’ Gold this year. The new vintage, from Osoyoos vineyards right beside Poplar Grove’s, continues a tradition of excellence started in 2008: the six vintages thus far have amassed striking accolades that include a Lieutenant Governor’s Award and a Decanter Regional Trophy. A healthy 820 cases were released this summer, and I was lucky enough to receive two bottles in my Autumn Preferred Share Wine Club shipment. The WineAlign judges describe the “classy and elegant” profile of violets, spice, and black & blue fruit, with firm but ripe tannins seeking a cellar in which to blossom. Winery Direct $38

Tinhorn Creek 2012 Oldfield Series Cabernet Franc: Only the second reserve tier Cabernet Franc from Sandra Oldfield (the first being 2010), this one is taking its time maturing in bottle before public release in November. Lucky Tinhorn Crush Club members got their allocation in the summer, and I just picked up my July package, held at the winery for me as I was away from home that month. The Black Sage Bench fruit from the winery’s Diamondback Vineyard spent 18 months in oak before bottling in June 2014. There’s no rush to release it given the predicted 10-12 year cellaring potential; it will only get better in bottle! Fortunately at 770 cases there’s more than twice as much as there was in 2010, so those outside the Crush Club should eventually get a crack at it. Winery Direct $35

Orofino 2012 Scout Vineyard Cabernet Sauvignon: Sadly, this one is already sold out at the winery, so I feel particularly lucky to have received it in my Fall Collector’s Club case. The 2012 is only the second vintage of varietal Cabernet from the nearby riverside Scout Vineyard, owned by trusted growers Murray & Maggie Fonteyne and long used as a source for Orofino’s delicious Syrah and Riesling. The vineyard is less than five acres in size, so it’s no surprise only 200 cases of Cabernet Sauvignon were produced; twice as many as the inaugural 2011 vintage but quick to sell out from the Cawston tasting room, particularly at the bargain price. In concert with the Silver medal at this year’s National Wine Awards, judge John Szabo complimented the bold and satisfying, plush ripeness. Winery Direct $29

Tinhorn Creek 2012 Oldfield Series 2Bench Red: Like many wineries Tinhorn marks the harvest season with release of several red wines. In addition to the celebrated Oldfield Series Merlot I also received the winery’s Bordeaux-style red blend in my fall Crush Club package. Grapes from both sides of the valley mix Golden Mile and Black Sage Bench fruit into a blend of 41% Merlot, 28% Cabernet Sauvignon, 28% Cabernet Franc, and 3% Petit Verdot, oak aged on the lees for 18 months. A generous 1,683 cases were produced, so it should be widely available upon release. Admirably, the wine is offered for the same price as the Merlot, despite being a more complex and labour-intensive blend. Having recently opened a bottle of surprisingly youthful 2007 (the first vintage) I’m confident in the 10-12 year suggested cellaring potential, especially from the near-perfect 2012 vintage. Winery Direct $30

Laughing Stock 2013 Portfolio: The latest Portfolio marks a new era for Laughing Stock, with owners David & Cynthia Enns having roundly celebrated the tenth vintage release last year. Their success marches on as the 2013 was sent out to eager Preferred Share Club members this month, and then public release October first. Production from the warm growing season in 2013 has moderately increased over that of recent years: 2,500 cases of Portfolio is approaching the 2007 high mark of 2,750. The blend is on target with 41% Merlot, 30% Cabernet Sauvignon, 18% Cabernet Franc, 8% Malbec, and 3% Petit Verdot, all aged 19 months in French oak barrels and puncheons. Having already enthusiastically enjoyed the luscious and mouth-watering “second label” 2013 Blind Trust Red I’m particularly excited about the Portfolio. Winery Direct $45