Visiting wine country during the annual BC Wine Appreciation Society Fall Bus Tour provides an invaluable opportunity to snag newly released wines and tasting room exclusives at the cellar door. Not only do the wineries that host this group provide special access to rarities but the voyage there and back often takes me through the full range of our key wine-producing regions. With home base centered in Penticton this year, the trip yielded several acquisition opportunities before I even reached the Naramata Bench start to the Tour. A strict shopping list kept me within budget, while adding some exciting new wines to my cellar. 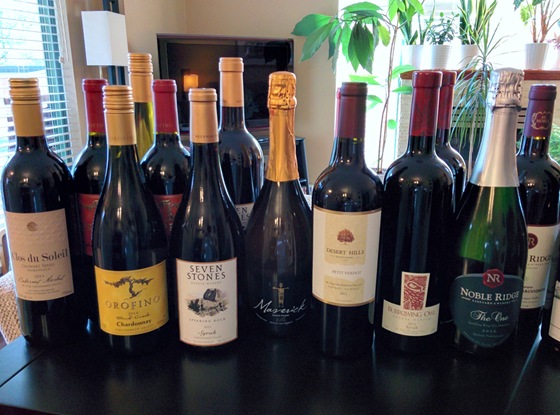 Travelling to the Okanagan via Highway 3 is always my preferred choice, because it takes me through the lovely Similkameen Valley. There are a great many superb wineries around the twin towns of Keremeos and Cawston, and an increasing number of Okanagan wineries are (sometimes quietly) sourcing grapes from the Similkameen’s high quality vineyards. Just outside Keremeos I visited Clos du Soleil to admire their brand new winery and bright, inviting tasting room. While there I picked up a bottle of the new “Grower’s Series” 2013 Cabernet-Merlot, from the Makepeace family’s vineyards south of Cawston (now home to the impressive Hugging Tree Winery).

Further down the road I made sure to stop by Orofino Vineyards, where my latest case of wine from the “Collector’s Club” was awaiting me. Fresh new 2014 Blind Creek Chardonnay was joined by 2014 Old Vines Home Vineyard Riesling and reds that included the “powerhouse” 2012 Beleza flagship blend and the last of the “ripe, plush” 2012 Scout Vineyard Cabernet Sauvignon – both silver medallists at the 2015 National Wine Awards. A short jaunt away at Seven Stones I fulfilled my mission to obtain George Hansen’s 2012 Cabernet Franc and 2013 Syrah. Only 183 cases of the fast-selling Syrah were produced – a complex fusion of smoked meat, licorice, and floral red fruit – and even fewer (174) of the sophisticated and ripe Cabernet Franc.

Entering the southern Okanagan the carefully crafted route provided my first visit to young Maverick Winery on the Golden Mile. I was fortunate enough to arrive on “Sparkling Friday” – the one day each week that visitors get to taste Bertus Albertyn’s traditional method sparkling wine “Ella”. The delicious bubbly was as good as I hoped, and filled up on the two bottle maximum, plus one of my few impulse purchases in the form of juicy new 2013 Syrah, from a small 200 case production. Having crossed the valley to the Black Sage Bench I tasted the rich range at Desert Hills while being fortunate enough to buy a bottle of 2012 Petit Verdot, one of several of their wines recently praised by John Schreiner, and described as “spectacular and age-worthy.” Nearby Burrowing Owl then yielded 2013 Syrah and newly released “fruitcake and chocolate” 2012 Merlot, recently named to the top of the pack at the National Wine Awards.

The day was already growing long so I zipped up to Okanagan Falls for a couple more visits before closing time. At Noble Ridge I was able to find 2012 Reserve Cabernet Sauvignon, another strong recommendation from John Schreiner: his 95-point review this summer made quite an impression. A mere 200 cases won’t last long given the winery’s growing reputation, buoyed by a Lieutenant Governor’s Award this year for their sparkling wine “The One”. (Although no longer available at the winery, I later found it in Penticton’s well-stocked Fairview Liquor Store.) As gates were shuttered across the region I visited with the team at Stag’s Hollow, learning more about the exciting upcoming reserve-tier 2014 Renaissance Grenache as well as Winemaker Dwight Sick’s darling 2013 “Cachet No. 04” – a “cutting edge blend” of Petit Verdot, Merlot, and Cabernet Sauvignon that was awarded Gold at the Nationals. 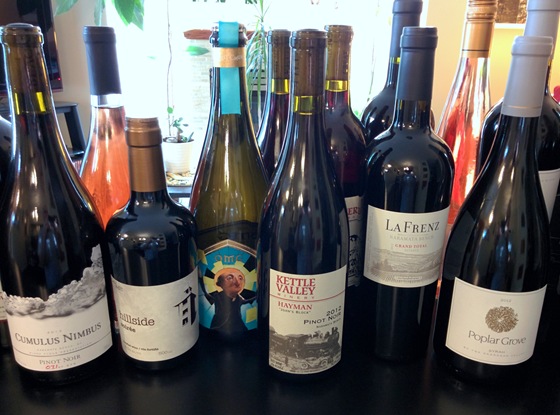 The actual Bus Tour itself provided great entertainment and education, while yielding a few more shopping opportunities. However, most of the wineries we visited are already represented in my cellar through prudent purchases at other points in time. That being said, meeting up with Winemaker Bradley Cooper at Serendipity allowed me to purchase from his personal Black Cloud label: single-barrel 2013 “Cumulus Nimbus” Pinot Noir, as well as the 2014 “Red Sky” Rosé for Thanksgiving festivities. A timely visit to Hillside helped me bring home the nicely balanced “Soirée” Port-style red blend, of which the final bottles from 53 cases sold out soon afterwards. Then on day two the sabering demonstration at Blasted Church sparked me to snag some crisp 2011 “OMG” sparkling to keep me in bubbles through the end of the year.

My long voyage home after the busy weekend was just as carefully timed and planned, with additional wine club pick-ups particularly necessary. I first dashed up the Naramata Bench on a Pinot Noir mission to Kettle Valley: small lots of new 2012 vintages of Reserve and single-vineyard “Hayman” wine were my target. John Schreiner got a chance to taste both of these reliable winners in advance this spring, with solid 92-point reviews for each. Also on hand and joining the Pinots with me was the 2013 Zinfandel from sister Similkameen winery Great Northern Vineyards. As I moved south I added La Frenz’s newly released 2012 flagship red “Grand Total” and the newest 2013 vintage of their well-priced Cabernet Sauvignon. Leaving the Bench at Poplar Grove I made sure to pick up my summer Wine Club six-pack containing mature 2009 Cabernet Sauvignon from the library, fresh 2014 Blanc de Noirs, rare 2014 Munson Mountain Pinot Gris, and Gold-medal 2012 Syrah. 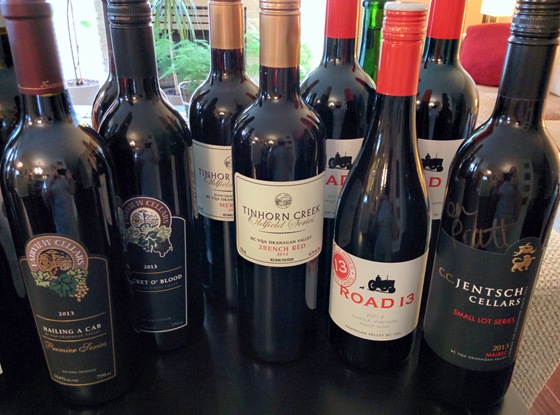 Hoping to reach home before sunset I made a beeline for the Golden Mile – stopping there for a chance to visit Bill Eggert and his friendly brother Chuck in the tasting room at Fairview Cellars. I was excited to find new 2013 reds were on hand: Cabernet Franc, “Bucket O’ Blood” Cabernet-Syrah, and the “Hailing a Cab” Cabernet Sauvignon, ‘enhanced’ by a hailstorm that helped concentrate the flavours. At nearby Tinhorn Creek I brought home a full case of wines on hold, representing two allotments from the winery’s Crush Club. The many bottles included ever reliable 2014 Oldfield Series 2Bench White and 2014 Oldfield Series Rosé, plus a slew of highly anticipated 2012 reds including the full range of (reserve-tier) Oldfield Series Cabernet Franc, Merlot, Gold-medal Syrah, and 2Bench Red blend.

There was a small amount of room left in the trunk for my final two stops before hitting the road for home. After being generously served by hands-on General Manager Joe Luckhurst at Road 13 I couldn’t resist the delicious new 2012 Castle Vineyard Pinot Noir. The winery’s Pinot program is winding down however, as their focus shifts to Rhone varieties centered on Viognier and Syrah. A couple bottles of fan favourite Sparkling Chenin Blanc joined the Pinot, along with the brand new 2012 Jackpot Petit Verdot, from Cawston’s Blind Creek Vineyard. With literally one empty spot left in the carefully organized cases being conveyed, I visited C.C. Jentsch for the first time, where a pre-ordered bottle of 2013 Small Lots Malbec awaited. As Winemaker Amber Pratt kindly signed my bottle I learned the (45 case) wine had reached sold out status that same day. It was an apt conclusion to my trip, and I returned home with a new challenge in mind – where to put my newfound treasures!