After a sweltering Saturday touring the Naramata Bench on the annual BC Wine Appreciation Society Bus Tour we moved south on day two. Our first stop on a more temperate Sunday came after winding our way up and down the steepest entryway yet. Once we arrived at the secluded Skaha Bench setting of Pentâge Winery tour guests admired the early-morning calm in the vineyards and lake below. Proprietors Paul Gardner and Julie Rennie each took half the group and showed off the winery and tasting room respectively. 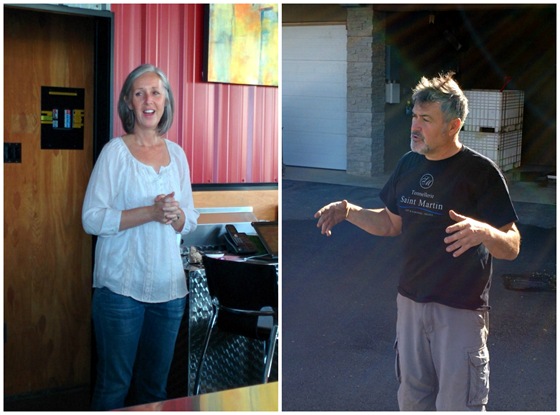 Paul’s rock-cave winery and dynamic vineyards encouraged conversation, as the press hummed away and new lots of picked grapes were delivered at his feet. Before a backdrop of vigorous old vine Syrah, Paul explained he was only the fourth to plant the variety in the Okanagan following advice from legendary local viticulturist Dick Cleave. Despite accepted wisdom at the time, the Syrah did not die as expected, and continues to thrive on Paul’s Geneva Double Curtain trellises, in which he avoids most traditional canopy management. The expansive winery cave was filling up with active fermentations in bin and tank, with Paul eager to explain the history of this incredible space. It took more than a decade to plan and fully excavate the 500 square meter cave, at which point it was completed with custom-made tanks from Europe. 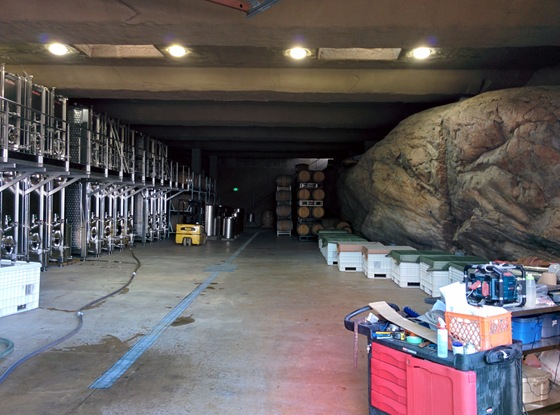 In the tasting room Julie introduced the broad range of varieties in use at  Pentâge with mellow and elegant Roussanne Marsanne Viognier 2011. The hugely aromatic 2008 Chardonnay made a good case for aged whites, while the 2013 Pinot Gris showed off perfumed pink tones from a rare touch of skin contact. The 2013 Gamay presented raspberry bush aromas and an intense palate in search of food; their use of the variety was inspired by Hillside’s early plantings. The 2011 vintage of their signature red wine – called simply “Pentâge” – was still young, with cellaring potential ahead for the six-grape mix that favours 80% Cabernets Franc & Sauvignon. We finished up with a uncommon late harvest white blend, yielding a pleasant honeyed finish from a creative combination of Semillon, Muscat, Chardonnay, Sauvignon Blanc, and Viognier. Perhaps the only style of wine not produced at Pentâge is sparkling (although to be fair there is a Frizzante Icewine). Luckily nearby Blasted Church had just enough bubbly for us – their first vintage of “OMG” from 2011. Our group was hosted around the winery’s private pool by newly promoted Winemaker Elaine Vickers, who works closely alongside Sumac Ridge veteran Mark Wendenberg – both joined the team in 2010-2011. At the pool Elaine sabered a few bottles of OMG for our amusement and education, using Blasted Church’s custom saber of course. The wine is a crown-capped traditional method blend of Pinot Noir, Chardonnay, and Pinot Blanc, showing crisp and clean fruit flavours and mouth-watering brioche character. 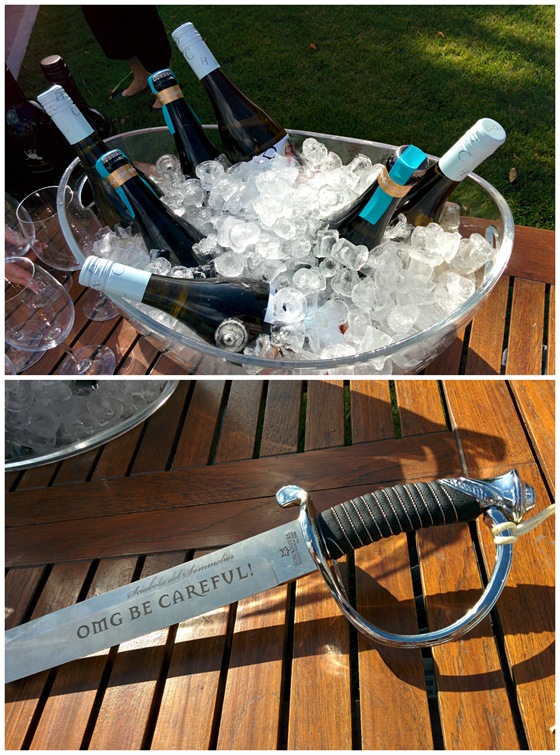 With feet dipped in the pool, members also enjoyed 2014 Unorthodox Chardonnay, an aromatic Musque clone with 5% Viognier, and the 2014 “Mixed Blessings” blend of Viognier (90%), Ehrenfelser (7%), and Pinot Gris (3%). We were particularly lucky to sample from and even purchase the sold out Lieutenant Governor’s Award-winning 2012 “Holy Moly” Petit Verdot, rich and toasty with a long finish of dark purple fruit. The specially reserved bottles sold with rapidity, along with plenty of others it would seem given the long line at the register. 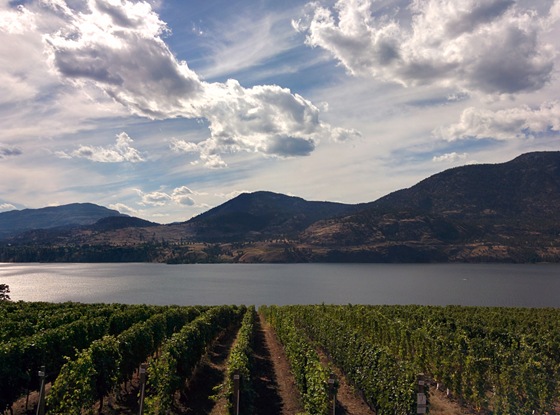 Up the road at Painted Rock Proprietor John Skinner was waiting to lead us through a barrel tasting of his youthful 2014 reds. With glasses of new 2014 Rosé in hand (a saignée of the estate Bordeaux red varieties) we dragged ourselves away from the view and down to the winery. After only several months in French oak barrels Merlot, Malbec, and Petit Verdot were on hand to show how each contributes to John’s “Red Icon” blend. While only Cabernet Sauvignon, Merlot, and Syrah are bottled individually, the other varieties are providing sufficient temptation for John to warrant occasional small lot releases: 165 cases of a very special 2013 Cabernet Franc were recently sent out to wine club members. 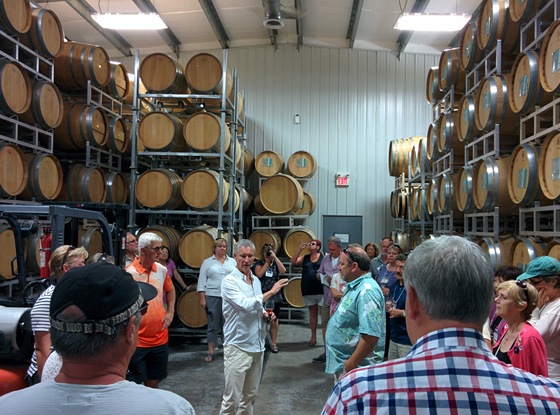 At the gleaming tasting room and event centre, a series of immaculate white tables had been set for an open-air lunch prepared by Joy Road Catering. With Painted Rock’s newly released 2014 Chardonnay we relished a composed salad that included roasted squash, butter bottom pears, Prosciutto, hazelnuts, and Pecorino. The entrée course provided red wine risotto with roasted grapes (and delightfully crunchy seeds), braised beet greens, and Cotechino Sausage for most, with Zucchini & Heirloom Tomato Gratin for others. The balance of savoury and fruity flavours in rich 2012 Syrah made for an inspired pairing. Vanilla bean & honey caramels closed out the meal, served as we hastily boarded the buses and made for our next destination. 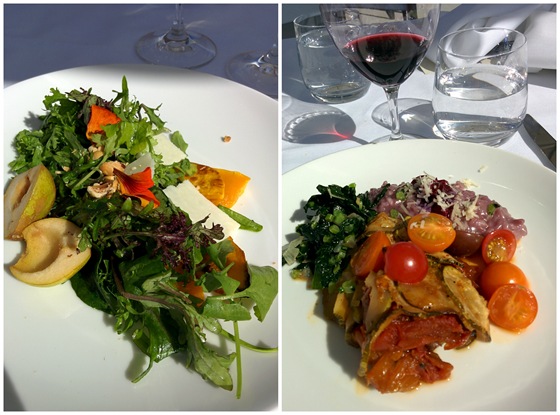 One final wine region beckoned, and a pair of new wineries in Okanagan Falls seemed like a lovely place to conclude the 2015 tour. At Synchromesh Winery Owner and Winemaker Alan Dickinson led a brief tour of the winery before a seated outdoor tasting where Alan’s parents helped pour his range of Riesling. Four vineyard-specific Riesling made in a very Germanic style distinguish Synchromesh, plus some small production reds – sourced from Kelowna to Oliver. Enjoying each Riesling alongside the others was enthralling given how distinctive they presented in context. A triplet of 2012 reds included the juicy Cabernet Franc-Merlot blend “Tertre Rouge”, complex (three clone) Pinot Noir, and the intense single barrel Reserve Cabernet Franc. 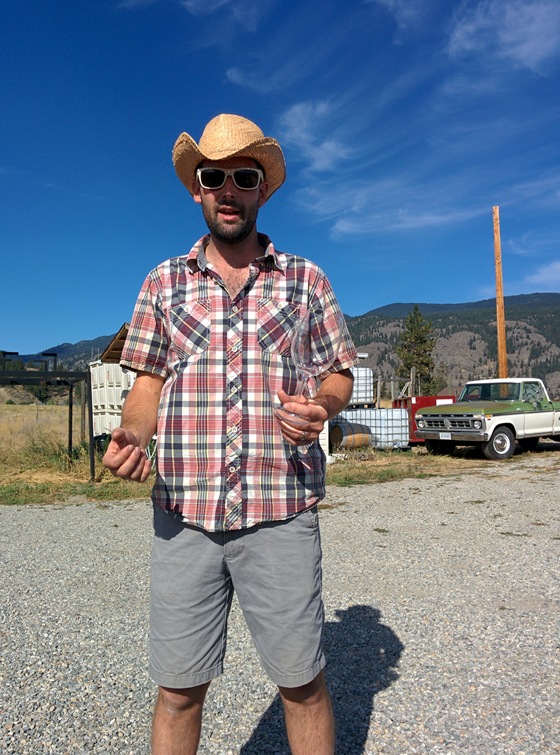 The next stop at Liquidity Winery concluded the tour: particularly suitable upon taking in the intoxicating view of McIntyre Bluff and the rolling hills and vineyards arrayed to the south. The sculpture-lined driveway and parking lot provided an introduction to the artistic focus at Liquidity, where Proprietor Ian MacDonald has installed selected pieces from his own private collection. The stunning view from the tasting room and well respected Bistro is the largest piece of art present, and a lovely backdrop to our meeting with Tasting Room Manager Erin Korpisto. 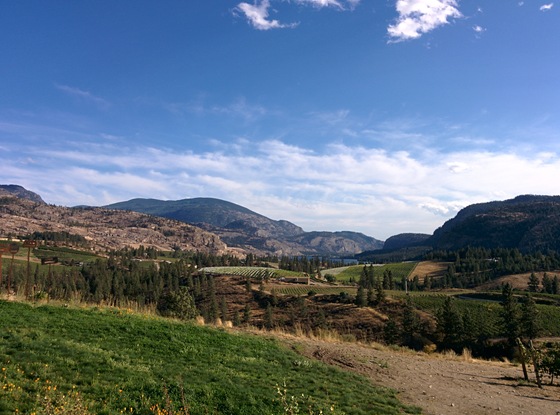 A delicious cheese & charcuterie platter from the Bistro accompanied samples of several wines, starting with the fresh 2014 whites – bright Riesling, quaffable “White Blend” (Chardonnay, Viognier, Sauvignon Blanc), and clean Viognier. The very well integrated 2013 Chardonnay (from 20% new French oak) was followed by baking spice and vanilla 2013 Pinot Noir. Ripe tannins in 2013 Merlot promised a long life given vibrant acidity, and the newly released, rich and dark 2012 “Dividend” Meritage was drinking particularly well. Group photos outside finished the day: it was a beautiful location to wrap up another successful bus tour!