At the end of July the results of WineAlign’s annual National Wine Awards of Canada were released to the public. Since the unfortunate demise of Wine Access magazine the respected periodical’s many contributors have helped grow WineAlign into a national resource. That growth has included taking the reigns of the former Canadian Wine Awards and producing something even greater in the Nationals. While judged wine competitions can’t fully reflect what it’s like to actually consume wine in the real world, I still find myself intrigued by the results. In particular, the prominent Gold and Platinum (representing the top 1%) medals at the Nationals can provide stimulus to try wineries and wines new to the industry, or to one’s own palate. 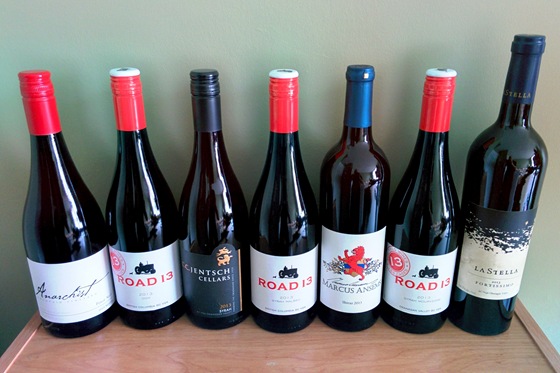 Given my focus on collecting BC’s best, I am fortunate to have many of the local big winners from the Nationals in my cellar already. Enjoyment of previous vintages, opportunities to sample during winery visits, and attention to the reviews of select local commentators often gives me a leg up before the awards are announced. In that vein a few of those wines that would ultimate place prominently this year were already on order or in my hands before the results were announced. A few more were on my radar, with the purchasing decision helped along by their success and the positive reviews posted by the competition judges. The following Gold and Platinum medal wines represent a mere sampling of the many great examples recognized from BC, they just happen to be those I acquired around the same time the awards were announced.

Anarchist Mountain 2013 “Wildfire” Pinot Noir: The high altitude Chardonnay and Pinot Noir grown by Andrew and Terry Stone outside Osoyoos is finally being made into wine of their own. Fortunately Terry’s brother JAK Meyer has a winery in Okanagan Falls to which they have access, along with JAK’s Winemaker Chris Carson. The brand new Pinot Noir is only the second vintage under the Anarchist name, and just received one of an impressive dozen Gold medals awarded to BC Pinot Noir this year (all others going to wineries much larger in size). Noteworthy is that one dollar from each bottle supports the local volunteer fire department: from 90 cases produced that’s $1,080 for vital lifesaving equipment. Libations Liquor Store $42

Road 13 2013 GSM: Perfect timing to have acquired this new wine from the increasingly Rhone-influenced Golden Mile winery. Expecting it to sell out quickly I placed an order in mid-July; shortly thereafter the GSM was awarded one of two prestigious Platinum medals (of 14 nationwide) for the winery. Only 140 cases were made, but production will hopefully increase in future years as the Rhone focus ramps up. This first vintage saw Winemaker J-M Bouchard take advantage of a local grower’s generous offer of Grenache, declined by other wineries for being not worth what he was asking – clearly their loss in the end! The blend of 81% Grenache, 15% Syrah, and 3% Mourvedre was said to encompass “honest, genuine, lovely succulence” in the 92-point score afforded by judges. Winery Direct $35

C. C. Jentsch 2013 Syrah: Chris & Betty Jentsch converted from cherries to grapes at the beginning of the century, and launched their own winery starting with the 2012 vintage. That initial 2012 Syrah – with little remaining at the winery – was awarded Gold at the Nationals this year. The new vintage being released received a coveted Platinum and the nod as Canada’s best varietal Syrah. While 2012 included some Viognier, hail damage precluded that practice in 2013, and Winemaker Amber Pratt blended 1,358 cases of straight Syrah from Golden Mile and Black Sage Bench fruit. High production numbers should give fans a good chance at finding some from Jentsch’s admirably broad distribution network. Swirl VQA Store $38

Road 13 2013 Syrah Malbec: This is the third vintage (393 cases) for this delicious and complex blend (83% Syrah, 12% Malbec, 4% Viognier, and 1% Mourvedre). Superb fruit and deft winemaking has helped the winery achieve an unprecedented “hat trick” – with an annual Platinum medal from the Nationals for each iteration! It goes without saying that I’m pleased to have collected all three vintages, having included the newest release in my recent order from the winery. A July event at Legacy Liquor Store provided a tasting opportunity hosted by Winemaker J-M and winery General Manager Joe Luckhurst:  ripe blue, floral fruit dominated the rich, lightly peppered palate, with relatively low tannins and fresh acidity. Very drinkable at present, with good aging potential as well. Winery Direct $32

Daydreamer 2013 “Marcus Ansems” Shiraz: Australian Marcus Ansems began marketing wines from his Naramata Bench winery last year, including this reserve tier branded with his signature and family crest. The first vintage of single vineyard Golden Mile Bench Shiraz (only 180 cases) was a finalist in the Okanagan Spring Wine Festival’s Best of Varietal Awards. It has been described in glowing terms by the WineAlign judges as showing northern Rhone savoury and spicy elements backing up a solid core of fruit. A Gold medal for the Shiraz was paired with another Gold for “Amelia”, a blend of Syrah and Viognier, helping to place Daydreamer among the Nationals’ Top 10 Best Performing Small Wineries. Libations Liquor Store $46

Road 13 2013 Syrah Mourvedre: With a nation-leading two Platinum medals, Road 13 had to settle for Gold on the Syrah Mourvedre. Another Gold for their Sparkling Chenin, plus ten Bronze, put them in solid third place nationally. This blend of 85% Syrah, 12% Mourvedre, and 3% Grenache is harder to come by than the Syrah Malbec, with only 155 cases produced, and retained for sale solely at the winery. Those at the recent Legacy tasting lucked out with a sample – earthier and toastier but slightly more elegant than the blockbuster Malbec blend. Calling it “heart attack wine” Joe Luckhurst recommended a no-holds-barred food pairing of “anything that will kill you.” Winery Direct $35

LaStella 2013 Fortissimo: In a spring tasting in London, Jancis Robinson & Richard Hemming tasted 150 Canadian wines, ascribing some of their highest accolades to this Super Tuscan-inspired red blend (their highest score of 17.5/20 went to LaStella’s 2011 Maestoso Merlot). The newly released 2013 (1,202 cases) continued the tradition of excellence started in 2007 by taking home one of BC’s seven Platinum medals at the Nationals: “classy with a lot of character” in the words of judge Remy Charest. This vintage contains the highest percentage of Sangiovese ever (16%) alongside 49% Merlot, 21% Cabernet Sauvignon, and 14% Cabernet Franc. The winery suggests it is pleasantly approachable now despite an 8-15 year life ahead. I have yet to open even my 2008, so there is no rush on my part! Swirl VQA Store $38