After spending the first half of the month abroad enjoying foreign wine, I had to make up time upon my return and find the latest new releases. The full range of cellar-worthy reds found their way home with me this month, from Naramata Bench Pinot Noir to intimidating bottles of big blends from the southern Okanagan. Although many represented wines I have collected in past vintages, I was just as pleased to add some new wineries based on the positive buzz they are generating. 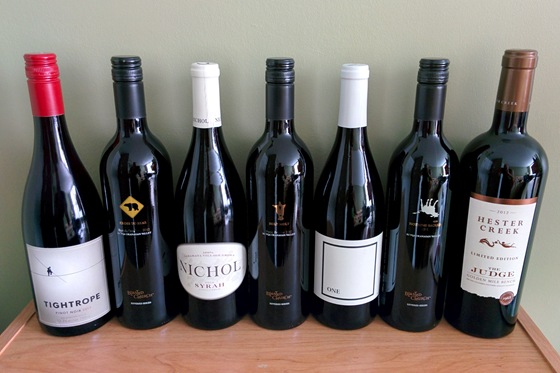 Blasted Church 2012 “Cross To Bear” Syrah/Malbec: Previous Winemaker Richard Kanazawa produced the first Cross To Bear from the 2008 vintage, a 50/50 blend of the two rich red varieties. In 2012 new Winemaker Mark Wendenburg repeated the endeavour, this time using 72% Syrah, 22% Malbec, and 3% Viognier. The two reds were aged separately for 20 months before blending and bottling, with the Syrah’s co-fermented Viogner adding the classic floral notes. Like the original (a 93-point “big and demonstrative red”), fewer than one hundred cases were made, and will rapidly sell out in the winery’s busy Skaha Bench tasting room. Winery Direct $36

Nichol 2012 Syrah: Snagging a bottle from the oldest Syrah vines in Canada is an annual necessity, particularly from a vintage the winery calls “one of the most open and accessible in years.” Nichol’s 17 rows of own-rooted Syrah in Naramata Village celebrate their 25th birthday this year, providing the winery with not only major cachet but also consistent, quality fruit in the realm of 400+ cases each year. The dark fruit and herbs & spice of the 2012 is suggested as capable of accommodating several years in the cellar, until 2022. Firefly Fine Wines & Ales $38

Blasted Church 2012 “Holy Moly” Petit Verdot: I opened a vertical of this rare varietal Petit Verdot earlier this year, tasting 2008 to 2011, a set of four challenging vintages for this big red. The chocolaty aromas and stewed blue and black fruit yielded plenty of discussion, with the well-balanced, bright 2010 winning the night despite the fresh fruit and floral aromas from the young 2011. Blasted Church’s devotion to this varietal yielded particularly big rewards this year when the 2012 was awarded a prestigious Lieutenant Governor’s Award after taking home a Gold medal at the All Canadian Wine Championships. No surprise that the 191 cases have begun to move even faster since the Award publicity. Winery Direct $36 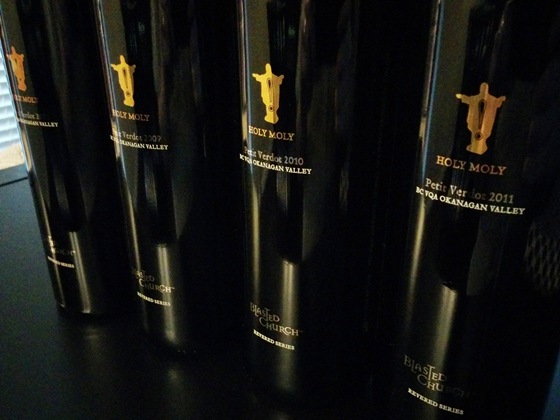 Lock & Worth 2013 “Square One” Cabernet Franc: An outpost in the southern Naramata Bench lets Nichol Vineyard owner Ross Hackworth (and Sales Director Matthew Sherlock) capture visitors who don’t make it further north to Nichol’s home-base. The former Poplar Grove property also allows Ross to work with varieties that would otherwise clutter the tight and focused Nichol portfolio. The sole area of overlap is in Cabernet Franc, from which nearly twenty-year-old vines that came with the property yielded 172 cases of “big, bouncy fruit” for their third vintage. I’m looking forward to opening this “driven, dense, and juicy” wine a little closer to the suggested best before date in the 2020s. Firefly Fine Wines & Ales $33

Blasted Church 2011 “Nothing Sacred” Meritage: I have managed to collect each vintage of the winery’s signature red blend since it was first made in 2007. As part of the reserve-tier “Revered Series” It is always a small production wine of approximately 200 cases, although the components of the blend vary substantial with each vintage. Because of the cool conditions in 2011 the winery harvested a combination of Merlot, Petit Verdot, and Malbec as late as mid-November. As a result of “extreme dehydration of the grapes, which concentrated the flavours, Brix levels reached 25 plus.” Winery Direct $40

Hester Creek 2012 The Judge: Having finally acquired my sixth vintage for this vertical collection I can admire the full crate of half a dozen stately bottles, encompassing every vintage produced of this new Golden Mile Bench icon. Thanks to pre- and post-blend aging Hester Creek was able to bottle and release the wine just in time to proudly brand it with BC’s first official sub-appellation. The combination of Cabernet Franc, Cabernet Sauvignon, and Merlot comes from some of the Okanagan’s oldest vines; from them Winemaker Rob Summers produces an age-worthy wine I can look forward to opening when I need to make room for the 2019! Swirl VQA Store $50