Through a happy coincidence the majority of my cellar acquisitions this month consisted of Pinot Noir. Some came in recent winery club shipments while others were courtesy of a group order following the BC Wine Appreciation Society’s 10th Anniversary Gala festival tasting. These traditionally lighter-bodied wines seemed thematically appropriate given the warm summer weather. 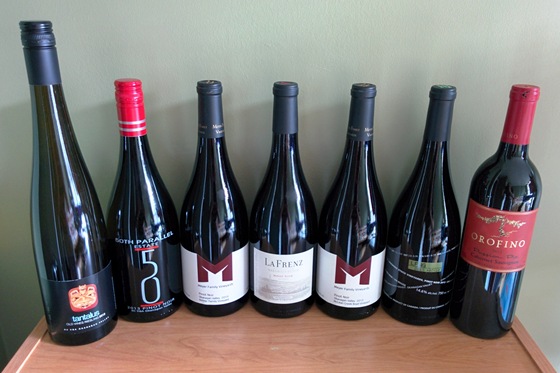 Tantalus 2012 Old Vines Riesling: Along with a couple bottles of the rare and delicious Brut version of this legendary Riesling I also snagged the table wine following the BCWAS Gala. Described as focused and pure by the winery it certainly focuses one’s palate, with a relatively dry 6.3 grams of sugar and racy 10.8 grams of acidity. Stats like those (and 35-year-old vines) ensure it will last nearly forever in the cellar. Winery Direct $35

50th Parallel 2013 Pinot Noir: Each year that goes by the young vines north of Kelowna provide a little more complexity (and acreage) for Winemaker Grant Stanley. The sixty-one acre estate is already yielding 2,145 cases of Pinot Noir, and production will likely continue to increase as the vines mature. A recent opportunity to taste this wine (a blend of six clones) prompted an immediate purchase, given the impressive balance and fresh, clean palate. Swirl VQA Store $35

Meyer 2013 Reimer Pinot Noir: Along with a couple bottles of the new 2014 Rosé (already sold out), my most recent Wine Club shipment from Meyer included new vintages of the winery’s two single vineyard Pinot Noir. I had the opportunity to taste both at a recent winery dinner hosted by the BC Wine Appreciation Society. The Reimer Family Vineyard in Kelowna yielded only 180 cases this vintage, so few likely remain at the winery. Winery Direct $40

La Frenz 2013 Reserve Pinot Noir: Owner/Winemaker Jeff Martin was present in person at the BCWAS Gala; I made sure to add a few bottles of his to the group order afterwards to take advantage of the opportunity. Along with some consistently superb fortified dessert wines I bought this well respected Pinot Noir, a reserve selection from the winery’s Naramata Bench “Desperation Hill” vineyard. While an excellent ‘regular’ version of the wine sells for $23, this one is simply “more of everything” as John Schreiner put it in his 92-point review. Winery Direct $35

Meyer 2013 McLean Creek Road Pinot Noir: In contrast to the fruit forward Reimer wine, the Okanagan Falls home vineyard has produced a darker, earthier, more spiced iteration of Pinot Noir. The wine was recently named Best Pinot Noir at the new Northern Lands Wine Competition in Edmonton. A larger production run of 500 cases should yield higher availability than the Reimer, but given Meyer’s growing popularity at home and in several countries abroad, even those bottles won’t be around for much longer. Winery Direct $40

Laughing Stock 2013 Pinot Noir: It’s been a few years since Winemaker David Enns produced a Pinot Noir (his sole vintages being 2004, 2006, and 2008). In the meantime the Enns’ have been developing their Osoyoos vineyard and crafting one of the country’s finest Syrah. The time finally came for a return to Pinot Noir, sourced from a small Naramata Bench vineyard. Only 124 cases were produced, and I was lucky enough to receive two bottles in my Preferred Share Wine Club shipment. Opening one revealed an intense, bold take on the variety, with 14.6% alcohol no less! Holding the second bottle for 3-4 years should be no problem. Winery Direct $32

Orofino 2012 Passion Pit Cabernet Sauvignon: My summer Collector’s Club case contained a number of juicy gems, including Scout Vineyard Riesling and Syrah, but the Cabernet was especially desirable. The whole winery team was present at the BCWAS Gala, pouring this one among several others, to great acclaim. With the wine offering exemplary intensity and richness, Orofino provides more evidence that the warm Similkameen Valley is the place to go for ripe Cabernet in BC. John Schreiner’s 92-point review sums it up nicely: “A tour de force.” Winery Direct $29