The low-lying clouds didn’t hamper stunning views as the BC Wine Appreciation Society recently sat down to the sold-out Meyer Family Vineyards dinner at Seasons in the Park. Expansive windows in the private dining room provided guests with a one-of-a-kind lookout from Vancouver’s highest natural point. The location was apt given how readily Jak Meyer is making a name for himself as purveyor of some of BC’s most celebrated Chardonnay and Pinot Noir. The wines, produced by Winemaker Chris Carson from carefully selected vineyards, have received the highest accolades provincially and nationally in only a few short years. 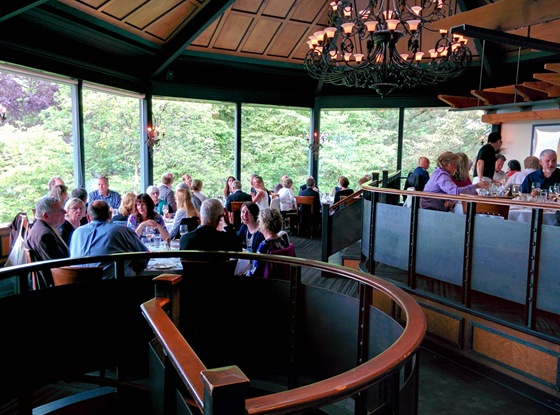 It’s been nearly three years since the BCWAS visited Meyer Vineyards in Okanagan Falls during the Society’s 2012 Fall Bus Tour. That memorable visit is still mentioned given the enjoyable outdoor tasting, the generous hospitality, and the superb wines brought home by nearly everyone in attendance! Since that time the Meyer family have continued to fine tune their focused portfolio as their twenty acres of Okanagan Falls and Naramata Bench vineyards continue to mature. While concentrating on Burgundian varieties, Jak has allowed for small quantities of Gewürztraminer and Riesling (listed amusingly as “Other Wines” on the Meyer website). Most exciting has been the recent news that an upcoming sparkling wine is already on the lees! The five-course meal began with one of those ‘other’ wines, as the newly released 2013 Gewürztraminer was paired with a trio of fresh oysters by Seasons’ Executive Chef Peter Isacu. Jak spent a moment introducing the wine, harvested from his McLean Creek Road home vineyard in Okanagan Falls, fermented with native yeast, and left on the fine lees for a few months before bottling last spring. A fresh cucumber and Granny Smith apple mignonette for the oysters provided fruit flavours that paired with the intense lychee character in the bottle-aged wine. Vegetarians enjoyed Roasted Yellow Beet Carpaccio while contemplating the Gewürztraminer’s rich tropical palate, which included roasted pineapple flavours and a lightly perfumed, honeyed finish. 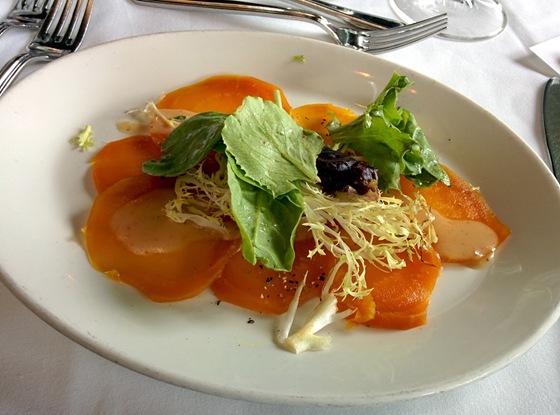 Guests next had the opportunity to sample a new variety recently added to the Meyer portfolio, as we previewed the 2014 Riesling. Last year’s 2013 Riesling was the first vintage, from which a mere six barrels were obtained via a contracted Naramata vineyard. The wine will remain a small lot production, but serves to complement the Gewürztraminer in providing some lighter variety. Pacific Smoked Salmon Buckwheat Blini was the selected pairing, with capers, shaved red onions, and orange fennel salad. Vegetarians received a generous hummus platter, with grilled asparagus, artichokes, crostini, mixed nuts, caponata, and tart gherkins – nearly a meal in itself! The lively and nicely balanced Riesling provided perfect fresh flavours of lime, apple, and lemon curd to pair with both dishes. 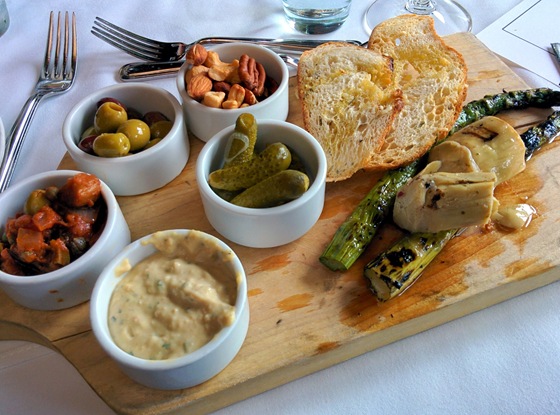 The time soon came for more serious investigation of the winery’s raison d’être, as we received a pair of newly released 2013 Chardonnay from Meyer’s two estate vineyards. The McLean Creek Road Vineyard contains a steep, southerly aspect mix of gravel and sand, on which two independent blocks of Chardonnay are planted. The wine presented the favoured traditional characteristics of apple pie and butterscotch, with a soft texture and pleasing toasty caramel nose as it warmed in the glass. The McLean Creek Chardonnay comes with acclaimed provenance, with last year’s 2012 named Best in Class at the Great Northwest Invitational Wine Competition, and the 2011 received a Platinum medal as top Chardonnay at the 2013 National Wine Awards of Canada. 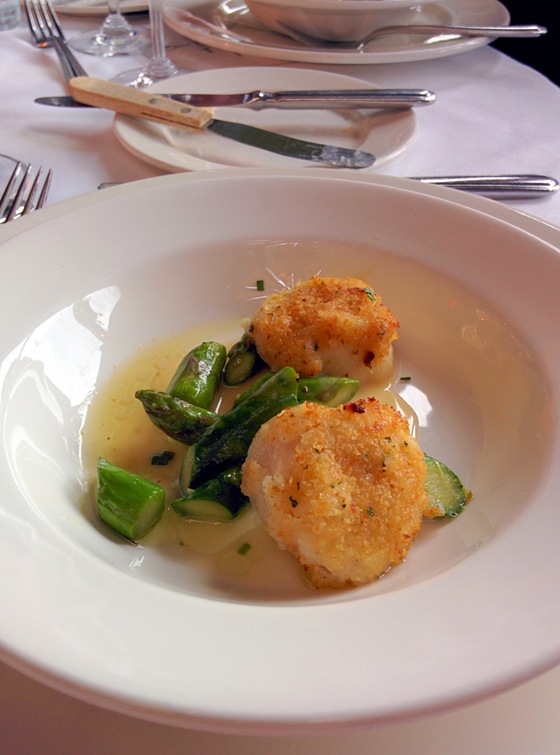 The Chardonnay were served with ideal food pairings of Parmesan Crusted Scallop or Butternut Squash Ravioli in Tomato Cream Sauce. The scallops’ lemon beurre blanc and the ravioli’s creamy but tart rose sauce were particularly ideal with the slightly brighter Old Main Road Vineyard (“Tribute”) wine. This smaller Naramata Bench vineyard (where the winery was in fact originally planned) yielded 380 cases, compared to 480 from the McLean Creek Road site. The silt and clay vineyard’s northerly aspect helped to yield an additional gram of acidity versus the first wine in the pair, providing mouth-watering, lemony character following the appealing popcorn aromatics. 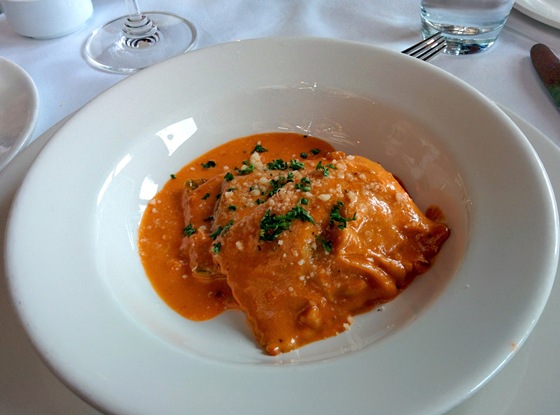 The Tribute Series Chardonnay is thus named because each year the Meyer family donates $5,000 to charity in tribute to an accomplished Canadian person or organization cited on the label. Tributes have ranged from the Emily Carr Institute to rodeo cowboy Kenny McLean to Paralympian Sonja Gaudet. In 2013 hockey legend Pat Quinn received the honour, thanks in large part to his long-time support for Canuck Place Children’s Hospice, the recipient of the most recent Tribute Series donation.

Enjoying the two Chardonnay side-by-side provided an illuminating rendering of vineyard expression. Both lots of grapes were harvested, (whole cluster) pressed, and fermented (in stainless steel) under identical conditions. In both cases the must was then transferred to French oak, of which 20% was new for McLean Creek and 33% new for Old Main Road. Natural malo-lactic fermentation took place while each wine spent ten months sur lees (without stirring) in oak. Each site’s unique characteristics, combined with minor differences in Brix and acidity at harvest, allow for the Meyers and Winemaker Chris to produce a real study of BC terroir. 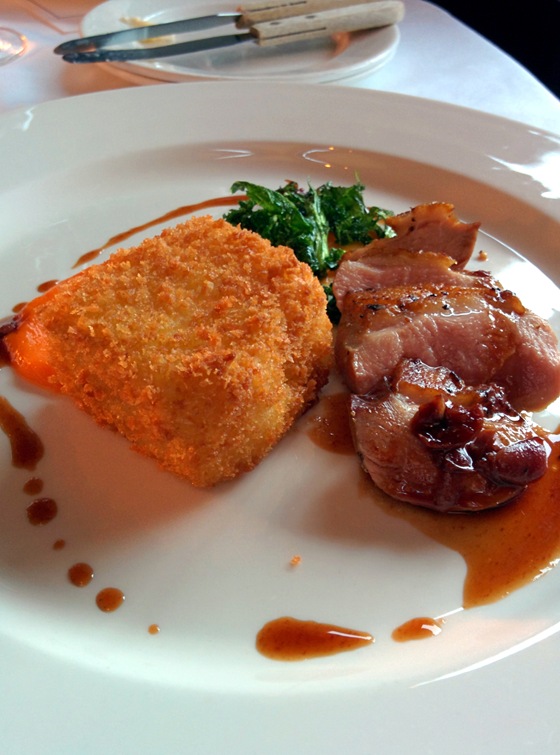 What Meyer does for Chardonnay is repeated in the red wine domain, with the grape’s Burgundian partner Pinot Noir. The same small lot, single vineyard philosophy is followed, with the McLean Creek vineyard paired up against a contracted Kelowna property. Our fourth course of Eggplant Parmigiana or Duck Breast with Sour Cherry Sauce provided another opportunity to compare vineyards from the same 2013 vintage. Carrot puree, crispy kale, and a potato croquette on the side of each dish provided even more flavours for our ongoing culinary adventure.

The 2013 Reimer Vineyard Pinot Noir comes from a site in south Kelowna planted exclusively to the variety, with a mix of French clones. The 2013 harvest was a challenge for Pinot Noir producers due to a week of rain in September; as a result the decision was made to delay harvest and allow the grapes to thoroughly dry out. By mid-October conditions were much improved at Reimer Estate, and any rotten bunches were easily identifiable. After production similar to that of the Chardonnay (10 months French oak aging) the Reimer wine revealed an elegant violet colour in the glass, with a fruit-forward palate of cranberry and cherry touched by earthy character on the bright finish. 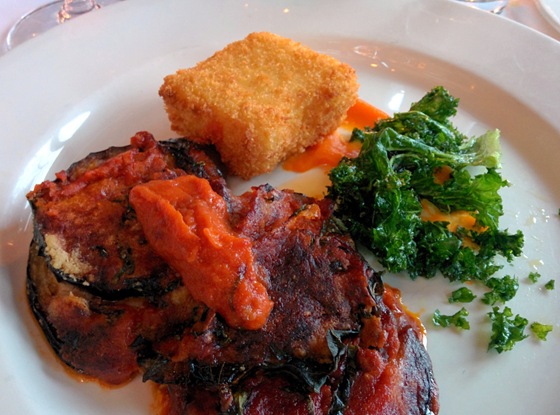 From the McLean Creek Road vineyard the same 2013 vintage was conveyed in a darker, spicier expression. Nearly triple the production quantity (500 cases) came from the home vineyard, but techniques remained similar, including the same proportion of 33% new French oak. A notable colour difference was apparent, with the McLean Creek wine leaning towards dark red brick. Cloves and baking spices on the nose led into an earthier, bolder palate suggested by Jak as more Burgundian in style. The wine was recently named Best Pinot Noir at the new Northern Lands Wine Competition in Edmonton.

A surprise third glass provided the opportunity to virtually accelerate the aging process when we received 2008 McLean Creek Pinot Noir. The wine’s first vintage came from the same year in which the Okanagan Falls vineyard had just been acquired by Meyer, prompting Jak to point out “they weren’t really our grapes.” With the seven-year-old wine now much darker in colour than its compatriots the nose presented rich and complex aromas, with tart red fruit and forest floor showing on the palate. In some glasses an interesting slightly oxidized quality was admittedly evident. The solid acidity and structure could ensure continued aging, and in fact the original tasting notes suggest an anticipated lifespan reaching until 2019. 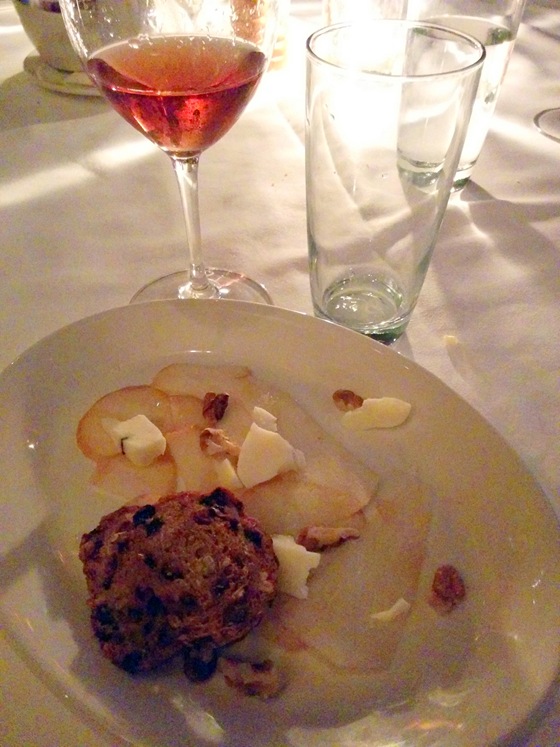 A glass of Meyer’s approachable 2014 Rosé concluded our meal as individual Truffled Peccorino Cheese Plates were distributed. The primary contribution to the Rosé is Pinot Noir (85%), but an additional 15% Gewürztraminer has been added to provide even more fun-loving character, with the grapes coming from vineyards in Kaleden and Naramata. The aromatic blend of strawberry blossoms is appealing, and the off-dry palate of candied strawberries, ruby red grapefruit, and pink peaches should provide plenty of summer sipping opportunities. Only 220 cases were produced however, so once tasting room visitors discover it stocks will likely decline with rapidity!

Many thanks to the staff at Seasons in the Park for their hard work and delicious food, and to Jak & Janice Meyer and their team at Meyer Family Vineyards for sharing such exciting wines. It was a joy and honour to explore another one of BC’s finest wineries.