Even with the approaching summer season and the call of whites and rosés, I still found plenty of cellar-worthy reds to dote over this month. With a couple of exceptions, all were relatively new releases too, keeping collectors piqued outside the traditional red seasons. A few favourites included a couple additions to cherished rotating vertical collections, meaning older vintages finally become fair game for consumption! 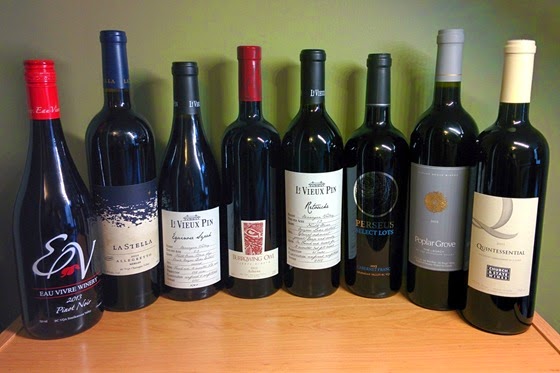 Eau Vivre Pinot Noir 2013: This Similkameen Valley star has significant provenance, as both the 2009 and 2010 vintages were awarded Lieutenant Governor’s Awards for Excellence in BC Wine. A bottle for the cellar became a necessity after it was revealed as my number one selection at the recent BC Wine Appreciation Society Blind Tasting (in which it was voted the overall crowd favourite). Considering only 600 cases were produced, as the winery’s flagship variety, and the “simply delicious” palate described by John Schreiner, it makes for an obvious collectible at a dynamite price. Swirl VQA Store $24

LaStella Allegretto Merlot 2012: Newly released for summer (and unlikely to last long) is one of Italian-inspired LaStella’s complex and coveted Merlot (the other being $100 Maestoso). Despite the iconic status of Maestoso, the own-rooted “Pie Franco” Allegretto from south-west Osoyoos is actually produced in lesser quantities: only 206 cases are available, while the most recent release of 2011 Maestoso saw 329 cases on the market. Needless to say it will be rare to find on store shelves, with Club/Society members and visitors to the Osoyoos winery likely to acquire most in short order; well curated VQA stores may have some. Winery Direct $70

Le Vieux Pin Equinoxe Syrah 2011: The sister winery to LaStella is focused on Syrah, recently expanding to three different styles at a range of price points. The winery’s Equinoxe tier of wines represent their penultimate reserve collection. The 2011 was released last fall and is now approaching end of vintage, not that 268 cases went very far to begin with. Several reviews on WineAlign emphasize the bright, elegant palate, well worthy of a gold medal at last year’s National Wine Awards. Even before release Anthony Gismondi was gushing about the wine’s fabulous character. Winery Direct $90

Burrowing Owl Athene 2012: A co-fermented blend of 53% Syrah and 47% Cabernet Sauvignon from a vintage generous to both varieties. The wine spent 21 months in a creative blend of 85% French, 10% American, and 5% Hungarian oak barrels before bottling last August and then several months of bottle age. The first few vintages of this wine (a versatile and beneficial blend that is growing in local popularity) were fairly hard to find, but lately it has been showing up in stores outside the winery. Firefly Fine Wines & Ales $42

Le Vieux Pin Retouche 2012: Recalling the secretive historical practice of “Hermitaging” Bordeaux wines inspired Le Vieux Pin to do the same here, adding just enough Syrah “that it sits invisibly behind the Cabernet filling in the gaps.” In previous vintages that has equated to approximately 20% Syrah, 80% Cabernet Sauvignon, and similar proportions are likely this year. This is in contrast to Burrowing Owl’s even split that shines more light on the Syrah component. The resulting wine (a mere 61 cases) can be expected to exude youthful but ripe tannins, which I am more than happy to tame into elegance with some years in the cellar. Winery Direct $69

Perseus Select Lots Cabernet Franc 2013: This young Cabernet Franc was quite popular at the recent BC Wine Appreciation Society 10th Anniversary Gala. The 2012 vintage (from the Similkameen valley’s renowned Blind Creek Vineyard) received a silver medal at the National Wine Awards, but the 2013 comes from a different vineyard on the Okanagan’s Golden Mile Bench. Little else is known thus far about it, given limited release; but when a small allotment arrived at Swirl VQA Store I was happy to pick up a bottle for future assessment before it all disappeared. Winery Direct $30

Poplar Grove The Legacy 2010: Cool conditions in the 2010 growing season prompted Poplar Grove to implement aggressive crop thinning practices; the harvest was reduced from 210 tons to 80 tons! Production of the winery’s icon “The Legacy” was cut by 40%, down to just 300 cases, which are seeing particularly limited distribution. Fortunately I was able to continue my vertical collection by snagging one bottle directly from the winery. Evidence of intriguing vintage variation can be seen when comparing 2009 and 2010 vintages, as Merlot decreased from 56% to 33% while Malbec increased from 3% to a bountiful 24%, surpassing both Cabernets! Winery Direct $50

Church & State Quintessential 2011: The winery delayed release of the 2010 vintage – still bottle aging – to present their award-winning 2011 after it was deemed more approachable. In a very impressive showing, it won a prestigious gold medal from the British International Wine Challenge last year, the first time since 2008 any BC VQA wine has been awarded higher than silver at the IWC. Although it could be eagerly enjoyed at present, this bottle will join my vertical collection to “put some fat on” as per Anthony Gismondi’s 90-point review. It bumps out the 2006, meaning I finally get to crack open that well-aged gem! Swirl VQA Store $60