My most recent quarterly shipment from Moon Curser’s wine club brought exciting new red wines, some of which are exclusive to this adventurous Osoyoos winery. Well-made examples of Carménère, Touriga Nacional, and Tannat are evidence that Chris Tolley is pushing the boundaries of accepted "cool climate" viticulture in Canada's only official desert. Additional rarities from other wineries joined my collection this month to continue established verticals in some cases, and provide even greater cellar variety from more of our creative local winemakers. 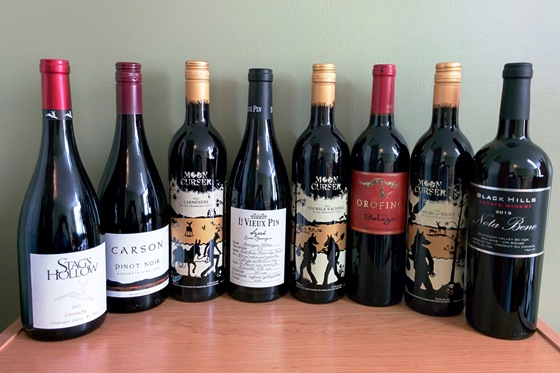 Stag’s Hollow 2013 Grenache: After painstakingly sourcing and awaiting maturity of the necessary vineyards Winemaker Dwight Sick finally got to produce his first Grenache in 2012. This second vintage continues the trend of excellence, “making a case for more vines in the south Okanagan” according to Anthony Gismondi’s enthusiastic 91-point review. Seventy percent of the grapes came from Penticton’s West Bench, with the remainder sourced from an Osoyoos vineyard that also contributed 8% Syrah for a little added spice. Several months in third-fill French oak have ensured the bright red fruit “pops from the glass,” with up to five years of healthy vigour predicted in bottle. Only 100 cases will go fast via the winery’s club and Okanagan Falls tasting room. Swirl VQA Store $34

Carson 2013 Pinot Noir: Meyer Family Vineyards Proprietor JAK Meyer snapped up internationally-experienced Winemaker Chris Carson back in 2008, and Chris has been putting Meyer’s Chardonnay and Pinot Noir on the world stage since then. As a side project, Chris produces his own “garagiste” brand of Pinot Noir, making a few barrels when he finds the time. The first vintage was 2011, released last May, suggesting 2012 may have been skipped over (or kept close to the chest) in the twelve months since then. Anthony Gismondi recently had a taste of 2013 and declared it “pure, terroir-focused, and eminently drinkable” in his 90-point review. With a mere 264 cases produced, I was pleasantly surprised to find it on the shelf in Vancouver. Sutton Place Wine Merchant $44

Moon Curser 2013 Carménère: Under former label Twisted Tree, Chris & Beata Tolley produced a single varietal Carménère once, in 2008. Finally, in 2012, using the new Moon Curser nomenclature they were able to do so again, making a wine named Best of Category at the Okanagan Spring Wine Festival, and one that John Schreiner found to be “of remarkable intensity…(that) demands full-flavoured foods.” With 2013 second in a trio of generous vintages the quality was sufficient once again, and production was even increased from 192 cases to 315, as the winery has found themselves with a fan favourite in high demand. Winery Direct $43

Le Vieux Pin 2012 Syrah “Cuvée Classique”: Last month I got my hands on one of the few remaining bottles of iconic Equinoxe 2011 Syrah, and now find myself with a new vintage from a different location in the cherished LVP portfolio. The middle tier of what is now three distinct Syrah’s has recently been renamed “Cuvée Classique” to differentiate it from the “Cuvée Violette” at the entry level (and a superb value for $30). The new vintage takes advantage of the 2012 growing season to show off what the winery (and many reviewers) feel is a bounty of intense, savoury, wild fruit. The high fruit quality combined with the deft and subtle hand of Winemaker Severine Pinte has ensured a long life ahead that I’m particularly excited to execute and enjoy when the time comes! Swirl VQA Store $56

Moon Curser 2012 Touriga Nacional: Several years of planning came to fruition – literally – in 2011 when Moon Curser produced a varietal Touriga Nacional, the first and only one in Canada. The vines hit their fifth leaf in 2012, and the second vintage was harvested at a healthy 24.6 Brix, but only yielding 48 cases from the small, single vineyard block. The first vintage was a huge success, being named Best of Category at the 2013 All Canadian Wine Championships and taking home a gold medal at the National Wine Awards that fall. Given that the 2012 has enjoyed an additional year of barrel and bottle aging over the 2011 upon release it should be even more successful at present, but with many very good years ahead of it as well. Winery Direct $43

Orofino 2012 Beleza: Another excellent 2012 red to get excited about, Beleza is the signature blend from one of my favourite BC wineries. Owners John and Virginia Weber have partnered with their neighbours the Hendsbees to grow the Bordeaux red varieties included in Beleza. The 2012 includes 40% each of Merlot and Cabernet Sauvignon, plus 10% each of Cabernet Franc and Petit Verdot, from both vineyards. (The single varietal Hendsbee Vineyard Petit Verdot is a very special gem as well.) John Schreiner recently provided extensive praise in his 92-point review for the “powerhouse of almost Port-like fruit that creates a rich, intense mid-palate.” Swirl VQA Store $36

Moon Curser 2012 Dead of Night: Amongst the other finds in my recent Moon Curser Club shipment was this cherished blend of Syrah and Tannat, considered by the winery to be their top tier red. The Tolleys started growing the extremely rare (in Canada) Tannat grape many years ago, and even bottled some single varietal versions during the Twisted Tree era. The vines are now well established, and succeeding in the warm Osoyoos climate, even providing sufficient quantity of fruit to enable a return of the varietal wine later this year (from the same 2012 vintage). After fermenting and oak-aging the two varieties separately, 247 cases were bottled last April, giving it a solid year in bottle before release. It has already been named Best of Class at both the 2015 Pacific Rim Wine Competition and the All Canadian Wine Championships. Winery Direct $43

Black Hills 2013 Nota Bene: The newest vintage from one of BC’s most well-known icon reds – I made sure to pick up a bottle immediately, from the limited stock available to stores. The winery typically cuts off sales in short order after release, to ensure enough remains for cellar door sales (and their own wine club members). Winemaker Graham Pierce praised “another outstanding vintage,” apparently providing sufficient ripeness to facilitate a hefty 49% Cabernet Sauvignon in the blend, along with 40% Merlot and 11% Cabernet Franc. It was bottled back in September, but undoubtedly remains quite young. Several years in my rotating vertical will allow it time to mature, and give me the opportunity to open the 2007 in the meantime. Swirl VQA Store $58