Another momentous tenth anniversary event for the BC Wine Appreciation Society saw a sold-out crowd relish a ten-year vertical of Black Hills Winery’s iconic Nota Bene red blend this week. Winery President Glenn Fawcett visited Vancouver to lead the tasting and share in the enjoyment – to the extreme envy of his colleagues back in Oliver! The Black Hills wine library is reportedly quite small, and such extensive vertical tastings are extremely rare, so Glenn was just as excited as the attending aficionados. He even managed to dig up and generously contribute two bottles each of the rare 2004 and 2005 vintages to ensure the vertical’s ten-year goal was met. 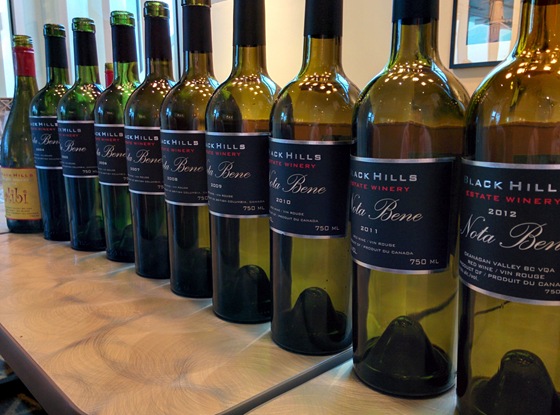 While we sipped the winery’s charming Sauvignon-Semillon blend “Alibi”, Glenn provided a quick history. The creamy palate and well balanced lemon curd flavours in Alibi provided a nice backdrop for an introduction to Nota Bene. Black Hills’ original Black Sage Bench vineyard (an abandoned 34-acre property) was planted in 1996 with a focus on Bordeaux reds: 45% Cabernet Sauvignon (four clones), 40% Merlot (four clones), and 15% Cabernet Franc (two clones). From these vines the first Nota Bene vintage of 1,600 cases was made in 1999, and by 2003 a cult following had grown thanks to positive media coverage and fan visits to the original Quonset hut winery.

Glenn helped lead a group of investors in a friendly takeover in 2007 when founders Bob & Senka Tennant “retired” to the Naramata Bench. The Tennants now focus exclusively on Galician and Rhone whites at their small winery Terravista, having planted Canada’s first Albarino. Since the transition varietal Syrah and Viognier have been added to the Black Hills portfolio, while Nota Bene production has been capped at 3,300 cases annually and a second-label line has been devised. The Cellar Hand brand allows Winemaker Graham Pierce to select only the best barrels for Nota Bene, yet provides for a superb value entry-level red. 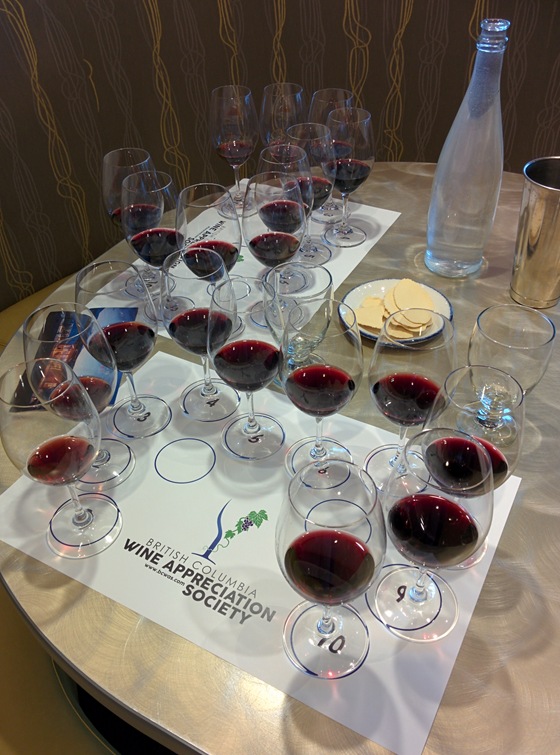 The talented pouring crew had managed to extract nearly 70 meaningful samples from the pairs of 2004 and 2005 bottles, and that’s where the tasting began. (The wines had all been decanted the previous day and then returned to bottle for pouring.) By 2004 the vines were in their ninth leaf, yielding sufficient fruit for 2,800 cases, originally suggested for consumption by 2009. Despite their age, both of those early vintages were still going strong, with violet and baking spices leading into a smooth, well balanced chocolaty palate in 2004. The more savoury 2005 showed off leather and dried fruits, with an elegant, spicy profile.

Working through the the next several vintages there emerged bright, fresh fruit character as the wines became more youthful. Even relatively old 2006 had plenty of life ahead of it with noticeable tannins still present amongst the vibrant flavours. I noted a personal favourite in the 2007, with a rich, ripe nose and dark, silky palate (also the highest alcohol at 14.7%). This was the same vintage Graham Pierce began his residency following the transfer of ownership, serving as co-winemaker that year alongside Senka. By 2008 Graham was in charge: this vintage was really showing off youthful, fruit forward aromas, followed by a creamy palate of chocolate with hints of black licorice. 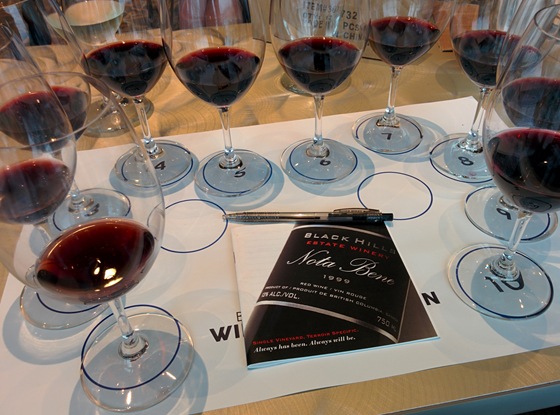 In 2010 the blend included the highest proportion ever of Cabernet Sauvignon (57%); the subtle nose of that vintage yielded tobacco and sweet red fruits, with a lighter body and plenty of acidity to age. This was the same year the winery made the decision to cap production and commence rigorous barrel selections going forward, creating and benefiting the Cellar Hand label. A colour transition was apparent by 2011, in which the violet spectrum dominated. Despite the cool season there were no green notes evident in the nose of plums, nor in the spiced milk chocolate flavours. The exciting development that year was acquisition of a neighbouring 15-acre vineyard, originally planted in  the same year as the estate vineyard, with virtually the same clones and rootstock.

Although the grape ratios in Nota Bene have always followed the vineyard proportions that slightly favour Cabernet Sauvignon, 2012 was one of two exceptions, with Merlot in the lead at 57% (1999 led with 64% Merlot). Despite its apparent youth, I found another favourite in this fresh and clean wine, possessing ripe tannins and all the classic (by now) Nota Bene notes of violets, cassis, and chocolate. There was a return to traditional form in 2013, when the lowest alcohol yet witnessed (13.7%) was also attained. This latest release, still available in select stores although sold out at the winery, was not nearly as chewy as expected, with notes of fresh berries and red licorice coming together nicely.

At the same time as this fall’s harvest the 2014 Nota Bene will also be bottled in preparation for release next spring. This year the winery added small amounts of Malbec and Petit Verdot to the vineyards, so future years will enjoy even greater complexity (and yet more challenging blending decisions). Glenn closed the tasting by requesting favourites from the assembled guests: the secret ballot showed 2006 in the lead, followed by 2008, 2009, and a 2010/2012 tie. Clearly those fans awaiting the 2014 release can look forward to several years of maturation in their cellars before the wine reaches its peak. Many thanks to Black Hills for their generosity and mutual excitement for this exciting event: best of luck in your 17th vintage!