I must be living in the past, because I still do a double take when I see 2014 red wines on the shelf. It doesn’t seem possible to purchase these youngsters already, but 18 months have elapsed since conclusion of the lovely 2014 harvest, leaving plenty of time for fermentation and barrel aging of most red wines. Of course, bottle aging adds additional time, hence the ongoing release of 2013 vintage wines as well. The earliest crack at fresh new bottles often goes to wine club members, hence my pleasure at receiving Laughing Stock’s latest this month, and my first shipment from the newly joined Stag’s Hollow Wine Club. 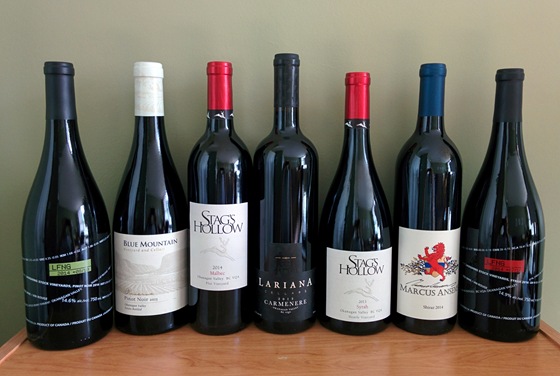 Laughing Stock 2014 Pinot Noir: It was only last year that Laughing Stock got back into Pinot Noir, after having purchased a second Naramata Bench vineyard, planted with the Burgundian variety. The “Small Caps” category that saw a couple of releases in the last decade was revived with 124 cases of 2013, and now 149 cases of the 2014 vintage are available, after 16 months in French oak (one third new). One would hope for further quantity increases down the road, as the newest winery exclusive release is likely already sold out given the fervent Preferred Share Club plus broad appreciation for the skills of Winemaker David Enns. I can’t help but be charmed by Laughing Stock’s poetic description: “Imagine chewing cherry fruit leather while walking through a forest after a rain.” Winery Direct $33

Blue Mountain 2013 Reserve Pinot Noir: The icon wine from Blue Mountain, and widely considered a benchmark in the local industry, is the Reserve Pinot Noir. I managed to obtain a small allotment thanks to my inceptive participation in the winery’s Priority Group, which I collected in person at this month’s pick-up party in Vancouver. The introduction of native yeast several years ago reached its pinnacle in the 2011 vintage, and since then the Pinot Noir has enjoyed full native fermentation, which is typically followed by 10 months in French oak and 18 months of bottle aging before release. Despite enthusiastically praising the wine’s intensity and purity at present the team of reviewers at WineAlign suggest further benefits to come from additional time in the cellar, advice in which I’m happy to oblige. Winery Direct $40

Stag’s Hollow 2014 Malbec: Seeking the lesser known and lesser seen wines of BC has led me to many a local winery’s club, and Stag’s Hollow is my latest wisely chosen membership. I was joyfully initiated with receipt of the winery’s first varietal Malbec, a club exclusive production of 106 cases. (Should any remain at summer’s end it will enjoy a public release in September.) The Plut Vineyard on the East Bench of Osoyoos yielded small lots of hand sorted fruit that included 2% Petit Verdot, aged for 15 months in 60% new French oak before being bottled this April. The winery suggests a “bloody rare grilled cut of beef” to complement the floral, earthy, ripe fruit and tannins, with development potential until at least 2020. Mine will remain in the cellar until then, one of a select few BC Malbec, and from a cherished producer at that. Winery Direct $35

Lariana 2013 Carménère: For some time reports have swirled that an ultra-rare (at least in BC) Carménère would join the petite portfolio at this small Osoyoos winery: only Black Hills and Moon Curser are known to produce single varietal versions. As John Schreiner detailed, mortality in the young vineyard’s Syrah vines lead to replacement with Carménère, and with Consulting Winemaker (and Black Hills founder) Senka Tennant on the case this rarity was inevitable. Now the acclaimed young winery has increased their range of wines by 50%, adding to spectacular Viognier and their rich red blend. Despite suggestions the Carménère, all 120 cases of it, would be released this fall, I was pleasantly surprised to spot it on select store shelves this month – before the winery itself had even published notice! Senka describes deep, dark fruits with licorice, pepper, and earth, while John’s recent 92-point review praised this “swaggering example.” Sutton Place Wine Merchant (& VQA Stores) $45

Stag’s Hollow 2013 Syrah: The Hearle Vineyard on the Osoyoos East Bench yielded Syrah (and 7.5% co-fermented Viognier) for a well-priced winner originally released last October. It was only recently the wine was named Best of Category at the All Canadian Wine Championships, and fortuitously included in my first club shipment from the winery. Four hundred and twelve cases saw 18 months of sur lie aging in 80% new French oak before bottling nearly a year ago. For some wineries this would be considered a small lot but Stag’s Hollow produces many more quasi-experimental wines in much smaller quantities (e.g., Dolcetto). A wine to sip will awaiting the first reserve-tier Renaissance Syrah from 2014, or age up to several years as the winery suggests. Winery Direct (& VQA Stores) $29

Daydreamer 2014 Marcus Ansems Shiraz: Last year Proprietor and Winemaker (and newly minted Master of Wine) Marcus Ansems released his first wines in the Signature Range bearing his family crest – 2013 Chardonnay and Shiraz. The “Shiraz” (the locally uncommon nomenclature honouring his Australian birth and background) went on to win a prestigious Gold medal at the 2015 National Wine Awards, and another one this year would not be unexpected. The new 2014 vintage comes from a Golden Mile Bench vineyard that yielded a mere 115 cases, after the wine spent a year in French oak. John Schreiner received the opportunity to taste back in November when Marcus earned his MW, and felt a strong 92-point score befitting the concentrated texture and bold flavours. Legacy Liquor Store $45

Laughing Stock 2014 Syrah: David & Cynthia Enns’ Osoyoos vineyard includes nearly 3 acres of Syrah that has impressed consumers and critics around the world since inception in the 2008 vintage (e.g., the 2011 was awarded a Decanter Regional Trophy). Compared to 2,500 cases of the better known “Portfolio” blend the several hundred cases of Syrah are a little harder to come by, but it always falls within my top local favourites. Hosting a six-year vertical from 2008-2013 last December was one of the highlights of my year. A touch of Viognier (3% in 2014) is typically added in a Northern Rhone style, while aging for this vintage found it spending 16 months in (45% new) French oak. I’m relieved to have locked up a couple bottles from my recent Preferred Share Club shipment – it has proven to be a trustworthy addition to one’s cellar. Winery Direct (& VQA Stores) $39