Collectibles: A Quartet of Quality Cabernet

In the course of amassing a small collection of cellar-worthy wines last month I found myself with more than could be detailed in just one summary. Surveying the favourites both new and old I realized the often under-rated variety of Cabernet Franc played a leading role. The cooler climate superstar is broadly acknowledged to be worthy of single varietal status increasingly frequently in BC. That being said, despite toping signature variety Syrah in acreage as the fourth-most grown red grape, varietal versions are most often small-lot productions. Persistence must accompany one’s taste for Franc in order to obtain the most sought-after bottles. 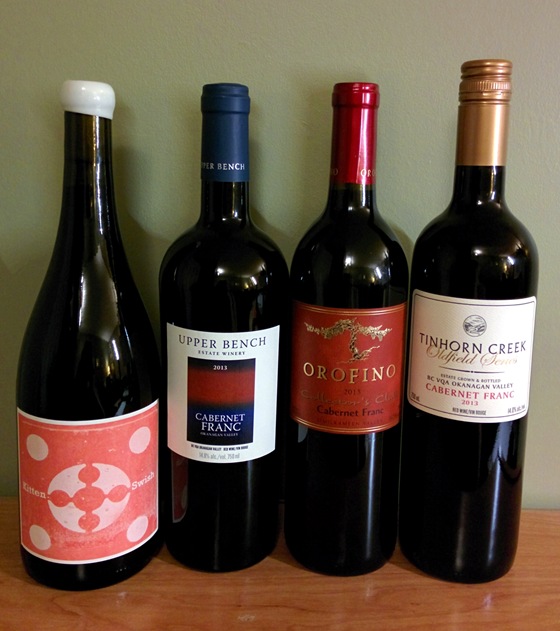 Kitten Swish 2014 Target Practice Cabernet Franc: Every so often an unknown and unexpected wine takes me by complete surprise, as did this ultra-small lot from Sommelier Brad Royale’s quirky Kitten Swish lineup. This “micro-négociant” project has primarily sourced California grapes since inception in 2011, but finally found the perfect Canadian opportunity in the hands of Laughing Stock’s David Enns and a young Osoyoos vineyard. Reading Anthony Gismondi’s glowing 90-point review out of the blue piqued my curiosity and started my search, handily concluded when Laughing Stock was able to ship several bottles my way. Considering only a single puncheon was produced (50 cases worth) it won’t be around for long, but it makes for an exciting collectible rarity to examine over time. Given the full body and bright acidity I’m eager to see how this youngster fares in a few years. Winery Direct $38

Upper Bench 2013 Cabernet Franc: This spring witnessed the limited release of the first varietal Franc from Penticton’s Upper Bench. Proprietor and Winemaker Gavin Miller waited until November 5 to harvest at a full 27.5 Brix, leaving him with 3.6g/L of sugar even after 14.8% alcohol – rich and ripe to say the least! Gavin’s extensive experience with Bordeaux reds on the Naramata and Skaha Benches (at Poplar Grove and Painted Rock, before opening his own winery in 2011) has prompted natural growth from Upper Bench’s celebrated Merlot and Cabernet Sauvignon. Only a wee 167 cases were made to start, but one hopes it might increase in the future should Gavin retain this gem as a single varietal wine. The nose of fig and smoked meat he describes leads into what sounds more like Sauvignon territory with a palate of cassis and cherry cola – worthy of his wife Shana’s sumptuous blue cheeses. Legacy Liquor Store $39

Orofino 2013 Collector’s Club Cabernet Franc: To reward Club members owners John & Virginia Weber like to make something special each year, and had the perfect idea when finding one special barrel from the 2013 vintage. For the first time, Orofino has produced a Cabernet Franc, and from their home vineyard at that – where it is normally destined for the flagship Beleza blend. That single (used) barrel was opened after two years and specially bottled just for us lucky loyal fans! The mouth-watering description suggests “robust structure with savoury notes of dried herbs and Bing cherries with dusty tannins.” I’ll cellar a bottle until decade’s end to investigate the recommended healthy life of five years – keep watching for when it’s opened. Winery Direct $32

Tinhorn Creek 2013 Oldfield Series Cabernet Franc: The upcoming Oldfield reserve reds are from the final hands-on harvest of winery President Sandra Oldfield, who handed the reins over to Andrew Windsor in 2014 in order to assume a greater leadership role. Andrew would have supervised the Black Sage Bench fruit’s 18 month aging and then bottling last May, to produce 520 cases that complement the popular $25 varietal tier of 4,000+ cases. Since the reserve tier Cabernet Franc joined the Oldfield Series of wines in 2010 only three vintages have made the cut, with 2011 failing to yield an appropriate selection; but the beautiful summer and long autumn in 2013 provided “perfect growing conditions” for harvest in late October. Like those of years before, the rare Oldfield Cabernet Franc should express the variety’s typical red berry and herb profile, but possessing additional polish and elegance above the varietal tier. Winery Direct $35