I was fortunate enough to bring home several reliable favourites this month thanks to the arrival of three wine club shipments. Most of these wines represent new vintages of long-time favourites; the high quality and/or benchmark status of these collectibles most certainly warrants mention. In addition to the usual suspects I amassed a few unique small lot products, enough to require a smaller, but serendipitously varietal-specific compilation coming soon. In the meantime enjoy learning about the world’s only “Tannant”. 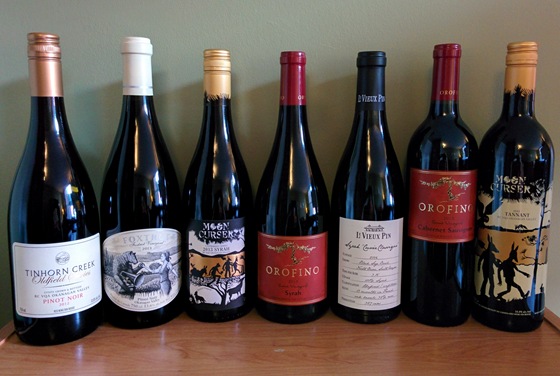 Tinhorn Creek 2012 Oldfield Series Pinot Noir: The second of three annual shipments from Tinhorn Creek’s Crush Club included the newest vintage of the winery’s extensively bottle-aged reserve Pinot Noir. There are few 2012 Pinot Noir just now entering the marketplace, providing Tinhorn Creek with the means to stand out and present a silky smooth expression of a rich south Okanagan take on the variety (from Golden Mile & Black Sage Bench estate vineyards). Even drinking superbly upon release shouldn’t keep any of the 1,050 cases from aging well however, and the winery suggests up to eight more years could follow the two years already spent in bottle (after 18 months in used oak). The future potential is one point emphasized alongside the “glorious aroma” obtained via “Burgundian detail” that John Schreiner praises in his 92-point review this month. Winery Direct $35

Foxtrot 2013 Pinot Noir: The cult status of Foxtrot’s Naramata Bench wines emerged quickly following the inaugural 2004 vintage; but was well deserved and remains so thanks to the uncompromising attitude of the Allander family. Although the price of the estate Pinot Noir can be steep after retail mark-up, I make room for one bottle of this icon red each year given its repeated success and my own past enjoyment. Own-rooted vines nearly two decades old encountered challenges from wasps in 2013, so the winery more than quintupled their picking time in order to hand-inspect every single cluster and remove individual damaged berries. The resulting slight reduction in yield will mean fewer than the typical 500 cases are available following the release this past February. Legacy Liquor Store $71

Moon Curser 2013 Contraband Syrah: This is apparently the final vintage for the reserve tier single vineyard Syrah from the winery’s Osoyoos East Bench estate. The short-lived Contraband Syrah (2011-2013) was partly the result of Saignée-style Rosé production, which ceased after 2013. With no intense “X-Rosé” remaining to include in the Contraband series, Proprietors Chris & Beata Tolley are refocusing on the varietal tier version and reigning in the growing portfolio. A wise decision that still must have stung a little when the final Contraband garnered one of only four Canadian silver medals at the 2016 Syrah du Monde competition in France, and then Best of Class at the recent Los Angeles International Wine Competition. If anything the varietal Syrah will become even better going forward with the addition of the premium grapes used in the limited production (376 cases) Contraband. Winery Direct (& VQA Stores) $32

Orofino 2013 Scout Vineyard Syrah: Receiving the first of two annual shipments from Orofino’s “Collector’s Club” this month yielded this consistently delicious Syrah. Approximately 500 cases come from 2.2 acres of the Cawston winery’s nearby partner vineyard above the Similkameen River. Proprietor John Weber went with his classic procedure of 20 months in mostly used and mostly French oak before unfined and unfiltered bottling last fall. Since the first vintage in 2009 it has been an easy-drinking but readily cellared Northern Rhone style with pepper and intense cherry fruit in a juicy, refreshing profile. The winery typically suggests up to seven years in bottle can be achieved; last year Anthony Gismondi felt the 2012 would be at its best in 2020 and I’ll give this new bottle room to grow as well. Winery Direct (& VQA Stores) $29

Le Vieux Pin 2014 Syrah Cuvée Classique: The masterful Syrah that French Winemaker Severine Pinte puts out from Le Vieux Pin is testament to her skill and experience, as well as the diverse vineyards to which she tends. The Cuvée Classique sits in the middle of the winery’s three-tiered Syrah assortment, darker and more savoury spiced than the gracefully floral Cuvée Violette. WineAlign co-founder David Lawrason summed it up as “drop dead gorgeous” in his 93-point review in February, emphasizing the extensive aging potential echoed by the winery. The 342 cases worth of  fruit comes from three south Okanagan vineyards that include the home vineyard on the Black Sage Bench. Thirteen months in 32% new French oak indicates the precision Severine takes in her work – no predictable schedules or simple proportions to be found. Winery Direct (& VQA Stores) $52

Orofino 2013 Scout Vineyard Cabernet Sauvignon: The Scout Vineyard is six acres in size, leaving room for 1.8 acres of Cabernet Sauvignon (plus Riesling) in addition to the aforementioned Syrah. The newly released 2013 came in my club shipment, one of two vineyard-specific Cabernet Sauvignon from Orofino (the other being the elder “Passion Pit” version). The riverbank vineyard’s “harsh rocky soil” is apparently quite friendly with this grape, as the 14.9% alcohol from a mid-October picking would attest. The wine experienced nearly identical elevage as the Syrah, with exclusively French oak, and a mere ten barrels worth (250 cases). Considering I have yet to open the inaugural bottling from 2011 this selection will see a bit of time in the cellar to improve even further. Winery Direct $29

Moon Curser 2012 “Tannant”: Before this adventurous Osoyoos winery’s rebranding from the original Twisted Tree nomenclature in 2009 they were almost certainly the only BC winery producing Tannat, let alone as a single varietal. In the years since, the dark and intense Tannat has been combined with equal parts Syrah for the flagship blend “Dead of Night”. Following a modest absence the varietal has returned in small proportions thanks to the stellar 2012 vintage. After bottling in March 2014 it was sampled here and there by owner Chris Tolley, who finally elected on a public release this spring. One could see why after the wine received a Gold medal from the Okanagan Spring Wine Festival’s Best of Varietal Awards, followed shortly thereafter by (another) Best of Class Award in Los Angeles. The peculiar name stems from a printing error that was embraced in lieu of re-bottling all 171 cases: “tannant” is the French language colloquialism for annoying! Winery Direct $43

The Orofino Syrah is one of the top 3 Syrah's for me in BC. Besides Orofino producing consistently good wines, the Syrah has many years on it. Orofino has no plans to expand production past their 5000 cases, so we can expect quality to be a focus for a long time.