A Fabled Dinner with Orofino Vineyards

A sunny spring evening provided a delightful opportunity to launch the work week with a Monday night Winemaker’s dinner at Fable Restaurant. The BC Wine Appreciation Society was joined at this acclaimed Vancouver “farm-to-table” venue by the owners of similarly esteemed Similkameen Valley winery Orofino Vineyards – John & Virginia Weber. The Society Executive had spent months organizing this latest edition in the semi-annual dinner series, and was delighted seeing it come to fruition. As the eager guests entered we were ushered to assigned seating where we looked forward to a five-course meal accompanied by one of my personal favourite wineries. 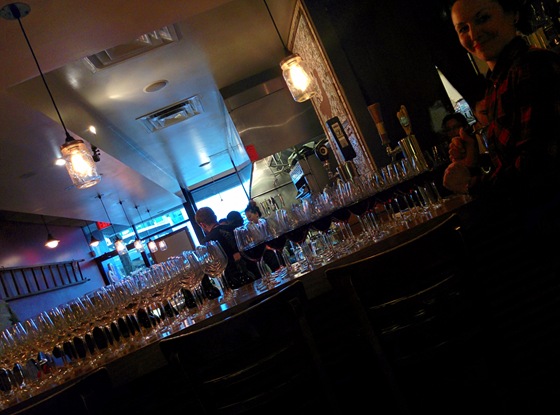 It’s been nearly four years since Fable opened on Kitsilano’s well known “West Fourth Ave”, where ardent onlookers can gaze into the glass-fronted kitchen facing the busy street. The early rave reviews have continued since then, making Trevor Bird’s ode to authenticity into a neighbourhood favourite and international inducement. The wine list at Fable includes over twenty BC wines to complement the local food, from vineyards in the Cowichan Valley to Osoyoos, and most points in between. The ripe Similkameen-centered libations crafted by the Webers are one of many staples on the list, providing the event’s Chef Max Straczek and his team with rich prospects for a focus on just one of the restaurant’s many preferred partners.

Surveying the printed menu and wine selection made it clear we would be sampling from a cellared selection across much of Orofino’s ambitious portfolio. Given the superb viticultural potential in the Similkameen Valley, Orofino has taken advantage of several vineyard sites since the Webers built their eco-friendly strawbale winery in 2004. Over the years a greater focus on vineyard specific wines has emerged at Orofino, and now multiple versions of certain varietals are present, including two Cabernet Sauvignon, and three Riesling. Much of the Webers’ success comes from the “mad skills” of their grower partners throughout the region, and they proudly tout the pedigree of each vineyard in their tasting room and marketing. Of course the old vines of the home vineyard in Cawston also help, providing original 1989 blocks of Riesling, Orange Muscat, Pinot Noir, Merlot, and Cabernet Franc. 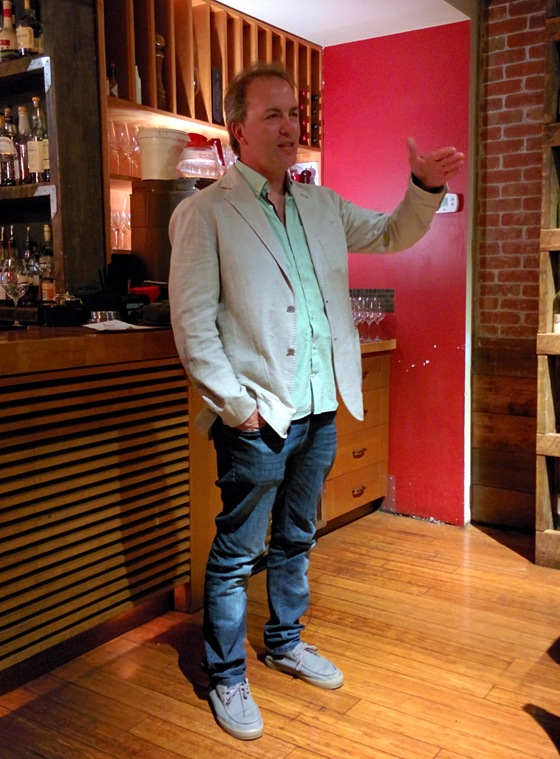 What must be the final bottles from the 2014 vintage of Orofino’s charming Moscato Frizzante were cracked open for an ideal reception wine, to reveal the growing influence a touch of Riesling brings to the Orange and Bianco Muscat blend. Estate fruit is combined with that from more junior vines of the neighbouring Hendsbee Vineyard to produce this easy-drinking summer favourite. A year in bottle provided the opportunity to enjoy hints of tropical lime amongst the orange blossom aromas while awaiting the upcoming 2015 release. The crisp and clean finish was nicely balanced thanks to a moderate nine grams of sugar, which John revealed would shift a little drier this year. As the weather warms fans are no doubt clamoring for restocked shelves!

The meal’s first course revealed the Webers’ generosity as they dug deep into their wine library. With Chilled English Pea Broth we received Orofino’s 2009 Riesling, a blend of all three vineyards (Home, Scout, & Hendsbee) that have enjoyed exclusive bottlings since 2012. Chef Straczek’s self-described “Spring in a bowl” featured rich confit egg yolk, ricotta, and vegetable skin ‘pierogi’, plus air-dried bacon for the omnivorous diners; vegetarians were happy with a second pierogi. After several years in bottle the Riesling had predictably developed some moderate petrol notes, but plenty of floral freshness remained as well. The lusciously textured key lime pie palate led into a pleasantly long honeyed finish as we lapped up the last of the egg yolk and fresh peas. 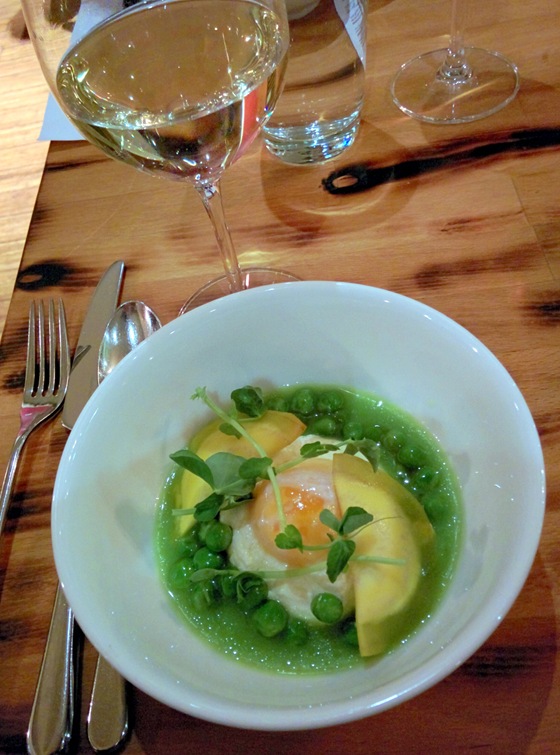 Already impressed, we moved on to the second course of Duck Liver Mousse or the earthy Mushroom Parfait, both topped with caramelized herb jelly, pickled spring vegetables, and cornbread toast. The wine of choice came via 2011 Chardonnay, sourced from the highly regarded Blind Creek Vineyard to the south of Cawston. John explained that Orofino emphasizes use of older barrels in their Chardonnay, adding just a single new barrel to the rotation each year. Aging in bottle had allowed for the development of rich buttered popcorn and creamed corn aromas, synchronizing perfectly with the cornbread. The intense palate arrived at the ideal serving temperature, providing for a quintessential Chardonnay profile, crisp and dry against the sweet jelly. Flavours of apple and lemon continued through the finish where subtle straw and more popcorn could be found. 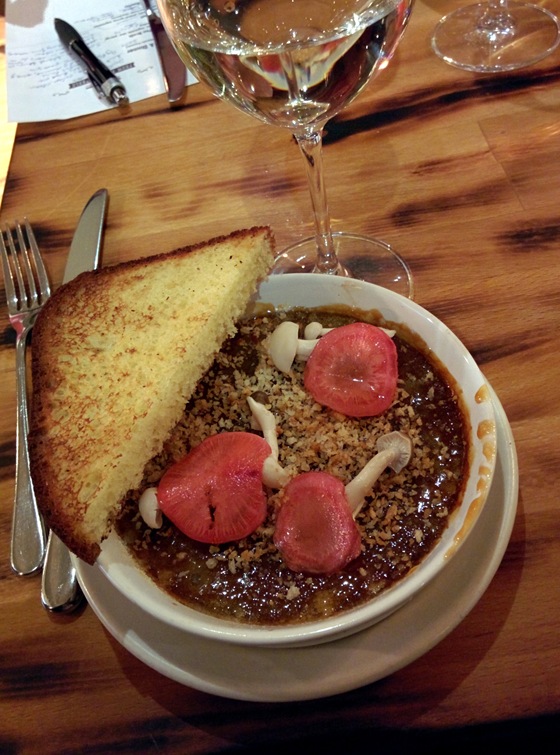 Challenged to fit a word in amongst the growing praise for both food and wine, John next introduced the red wines, the first complementing Chef Straczek’s inspired Stinging Nettles Risotto. Poached shallots accompanied confit salmon or roasted golden beets, with delicate kale flowers adding further embellishment. From Orofino’s home vineyard, 2011 Pinot Noir was the obvious choice: a blend of five clones of varying age (some over two decades old), it spent 16 months in French oak before bottling unfined and unfiltered. A nose of stewed strawberry and dusty pavement announced the powerful palate, with a hint of rubber tire for emphasis. The tart and toasty flavours remained fresh after five years, with cranberry and refreshing menthol playing well against the heavier risotto amongst an impressively long smoked black cherry finish. 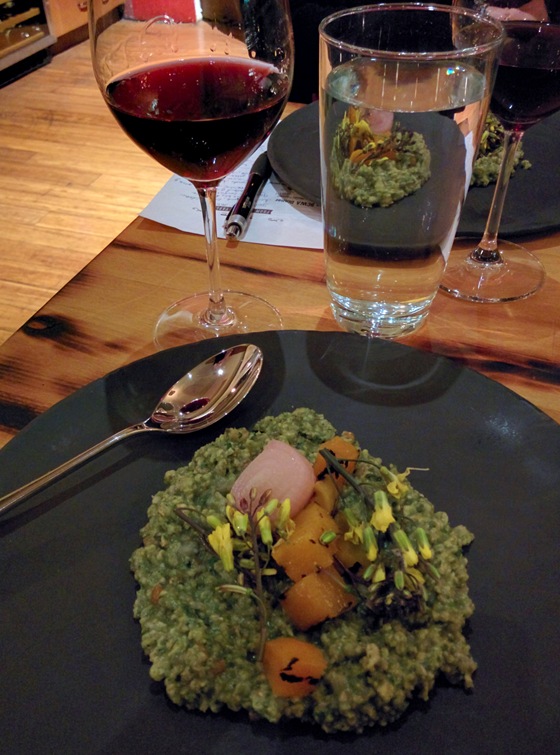 A theme emerged as a further example of the 2011 vintage accompanied Braised Beef or Cauliflower Steak: a single barrel of home vineyard Merlot was produced exclusively for Orofino’s new wine club that year. Apart from those lucky Collector’s Club members none of the Merlot (not produced as a single varietal at Orofino) had been shared with anyone prior to this dinner! Atop smooth porcini cream and accessorized by pomme gelatte and truffle jus the beef and cauliflower rendered diners even more impressed, while the complex wine interplayed splendidly amongst the range of flavours. The 27-year-old self-rooted vines provided for what John suggested was an Old World profile in opposition to fruitier Okanagan iterations. Herbal aromas of sage, cocoa powder, and dried blueberries enthralled while the dark palate kept us guessing at tart blackberries before residual volatile acidity blew off to reveal currants and caramel. 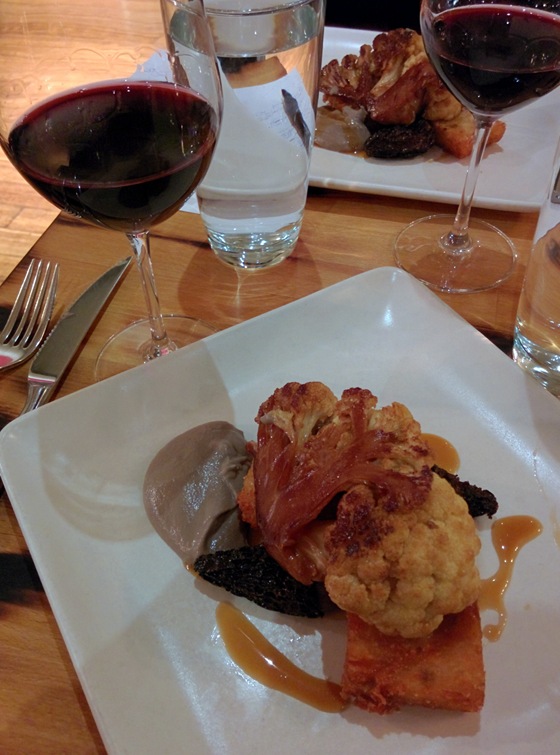 The dessert course upped the ante even further on what was becoming a legendary dinner, providing a non-traditional pairing that eschewed something sweet in favour of Orofino’s exquisite “Beleza” flagship red blend. Not only did the Black Bean Cake with cocoa ice cream and cappuccino gel astound palates but the shockingly good wine complement left mouths agape – fortuitously soon filled with more cake and ice cream. The 2009 vintage of Beleza blended 40% Merlot, 30% Cabernet Sauvignon, 20% Petit Verdot, and 10% Cabernet Franc from the home and Hendsbee vineyards that spent 20 months in French and American oak barrels. The ripe but restrained nose opened up to a floral blend of violet and lavender plus mouth-watering milk chocolate. The bitter cocoa and coffee on our plates meshed perfectly with the rich chocolate and cola in our glasses, ensuring the dry wine found an ideal and memorably measured match. 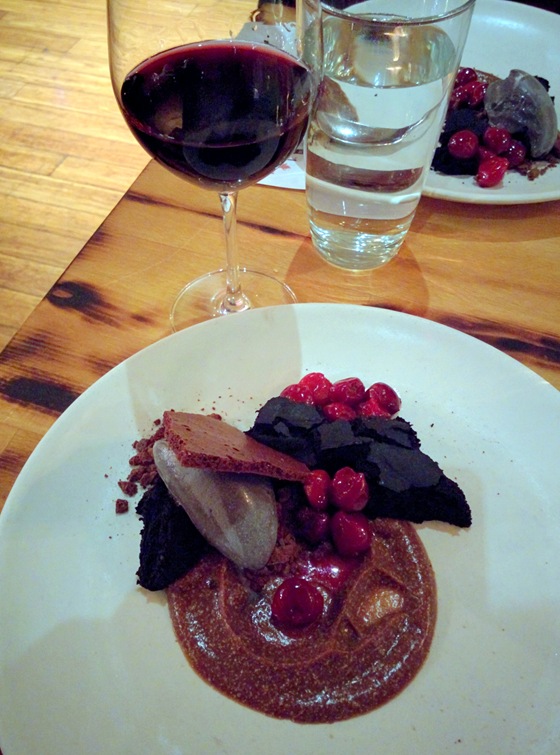 The buzz of compliments had not yet died down before John presented a surprise sip for our post-dinner enjoyment. In raiding the cellar for this meal he couldn’t resist a few bottles of 2008 Gamay, to even better illustrate the range of high quality grapes available to Orofino. Despite several years in bottle the Gamay was stunningly fresh, providing for a bright palate cleanser to conclude the meal. The smoky red berries suggested youth, but the complexity, depth, and integration of age made for a sublime conclusion to an unforgettable experience. As the night closed guests expressed their supreme gratitude for the hospitality shown by owner Trevor Bird, Chef Straczek, and the outstanding kitchen and service staff at Fable. Their creativity and skill, combined with the generosity and enthusiasm of John and Virginia have made this meal particularly memorable.