I was reminded of the diversity that can be found in wine production schedules this month, seeing full-bodied Merlot and Syrah emerging alongside the spring’s freshest whites and Rosé. While some days see me finding long-sought bottles in out of the way stores, or finally caving to my desires for the last batch of some rarity for which I have no room, every April collectible is a brand new release. With a couple exceptions, these seven wines are exclusively small lot productions rarely seen in stores, necessitating immediate purchase when spotted, or acquisition directly from the winery. 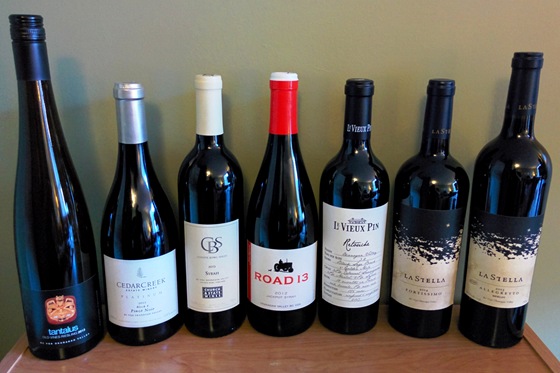 Tantalus 2013 Old Vines Riesling: Although BC now has a healthy proportion of world-class Riesling, it’s Tantalus and their old vines that receive the greatest cult status. While the winery’s regular Riesling is exceptionally delicious as well, the dry and intense Old Vines version is a consistent collectible with superb aging potential. Released after two years of bottle age it sells out fast from the winery, and has been absent from VQA stores for years. Intense acid in 2013, reaching 10.7g/L, is barely tempered by a relatively low 9.1 g/L of residual sugar, leading reviewers like WineAlign’s David Lawrason to praise the powerful texture, riveting acidity, and outstanding length: “It should age decades.” Hearing that Winemaker David Paterson believes the 2013 is his best ever provides quite the impetus to sock some away! Swirl VQA Store $35

CedarCreek 2013 Platinum Pinot Noir Block 4: One of two reserve-tier Pinot Noir at CedarCreek, the Block 4 received a Gold medal from the National Wine Awards last summer. Despite bottling in March 2015 it is only now trickling into stores after a year of bottle aging and great patience on the part of collectors. The Block 4 typically differs from the lighter more floral Block 2 label, with robust body and spiced mocha character suggested after going through wild fermentation and 15 months in French oak. Like the other Platinum wines it comprises a small lot, with 420 cases produced from 2013 (alongside 325 cases of the equally new Block 2). New owner Anthony Von Mandl’s confidence in his property appears strong, given the 50% price increase the Platinum Pinots experienced after the winery’s acquisition in 2014. Swirl VQA Store $66

Church & State 2013 Coyote Bowl Syrah: The reserve-tier Syrah from Church & State’s Black Sage Bench Coyote Bowl Vineyard is another benchmark for the varietal from BC, with a slew of decorations to its name in previous years, including a Lieutenant Governor’s Award. The newest vintage was just released after having been bottled last August following 22 months in 40% new French, Russian, and American oak. The winery’s crown jewel home vineyard is yielding an abundance of quality Syrah grapes, enough for 1,075 cases from the superior 2013 vintage. Having tasted it alongside a handful of other BC Syrah recently I found it leaning towards the serious and savoury side, with readily apparent peppercorn atop intense dark fruit, plus sufficient structure to keep it sound for a few years in the cellar. Swirl VQA Store $38

Le Vieux Pin 2013 Retouche: Like the discretely Syrah-infused “Hermitaged” Bordeaux produced by outlaw winemakers of old, Retouche is 40% Cabernet Sauvignon, 40% Merlot, and 20% Syrah. The new blend marks an abrupt change from previous years however, when it included only Cabernet and Syrah. It was recently released to Wine Club members and a few lucky restaurant clients, but is worth seeking out for collectors – only 125 cases were produced (still, a big increase from the 61 cases in 2012). The combination of prime grapes from the famed U2 Block north of Oliver, the Golden Mile, and the home vineyard on the Black Sage Bench spent 18 months in used French oak, ensuring the fruit flavours shine. Having tasted it earlier this month John Schreiner complimented the cassis aromas and concentrated “flavours of black currant, coffee, and dark chocolate.” Winery Direct $69

LaStella 2014 Fortissimo: This well-priced Super Tuscan-style blend is the Italian-inspired winery’s workhorse. Compared to smaller lots of varietal Merlot, Cabernet Sauvignon, and Sangiovese the Fortissimo practically routs the rest with 1,374 cases produced in 2014. Although it hasn’t necessarily been a stated goal, it is exciting to see Sangiovese finally reach the second-highest proportion of the blend for the first time, with 21% following 57% Merlot, and trailed by 11% each Cabernets Sauvignon and Franc. The grapes – from five vineyards throughout the southern Okanagan – were aged in more than 40% neutral oak, with only 15% new barrels used. Fortissimo is consistently well crafted for current consumption as well as elegant aging; I was surprised to discover I now have seven vintages in the cellar! Swirl VQA Store $38

LaStella 2013 Allegretto Merlot: Although the iconic Maestoso Merlot is the king at LaStella, the Allegretto has risen in the ranks to provide for a relatively close second status, and is often even more difficult to acquire! Allegretto comes from the Stagg’s Vineyard on the west side of Osoyoos Lake, further south than the lakeside home vineyard where Maestoso is grown. The pure white sand and low water retention in Stagg’s allows the Merlot vines to be grown on their own rootstock (without fear of phylloxera infestation), leading to the “Pie Franco” designation (“on its own foot”). Four acres of lovingly tended vines yielded a total of 275 cases in 2013, which spent 18 months in used French oak before bottling. The result is a well-integrated wine that the winery believes leverages the strong growing season to offer “more immediate appeal upon release” than previous vintages. Winery Direct $69

Tantalus 2013 Old Vines Riesling is a great wine but have you compared it with Sperling's OV Riesling. Apparently The vines, clone 21B from the Mosel, were planted on the same day in 1978.

I got a chance to sample the Sperling at the winery during the Fall 2014 BCWAS Bus Tour; a very nice wine indeed - thanks for the reminder!